20 Interesting Vintage Photographs of American Troops During World War I

It was 101 years ago this year that the United States officially entered World War I, when Congress voted to declare war on Germany on April 6, 1917.

After more than two years of trying to remain neutral, the U.S. under President Woodrow Wilson joined Allied Powers Britain, France, Italy and Russia against the Central Powers of Germany, Austria-Hungary and Turkey.

From the start of the war in 1914 to its bitter end in 1918, an estimated 17 million people — civilian and military — had died. About 4.7 million Americans, who either volunteered or were drafted, served in the war and about 53,000 died in action. After devastating losses on all sides, the Allies and Germany signed an armistice on Nov. 11, 1918.

These stark images released nearly a century after the end of the war show U.S troops keeping watch in the trenches, injured on the battlefield and arriving back home after the fighting was over. 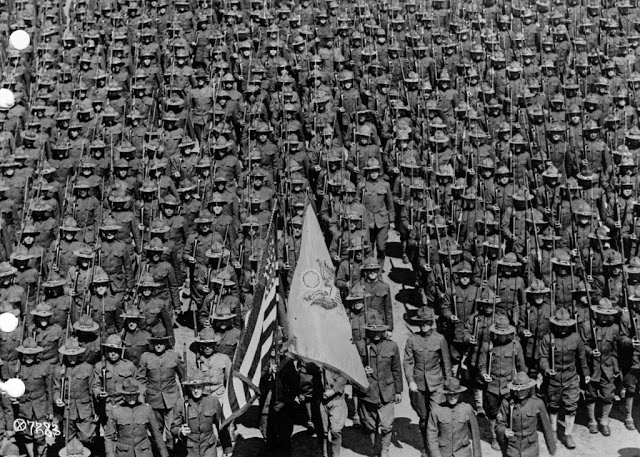 US soldiers of the 82nd division stand in formation at Camp Gordon in Georgia in 1917 - the year they joined the war effort in Europe. 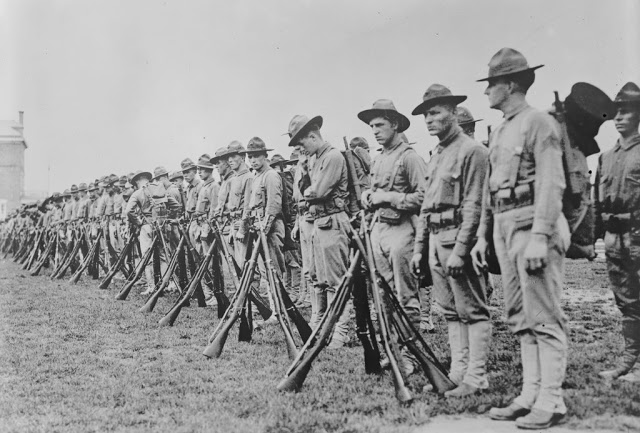 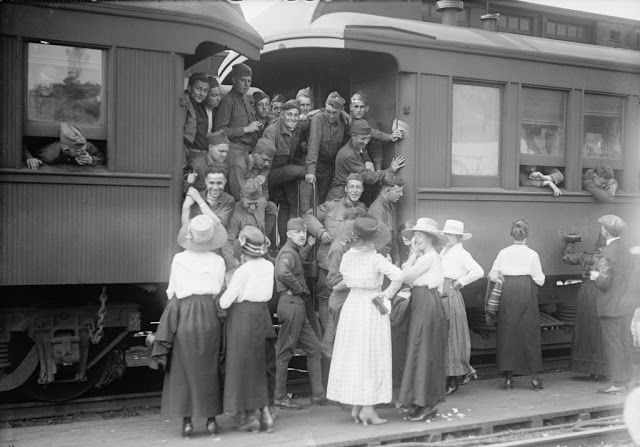 US soldiers are seen returning to emotional scenes in Washington DC after serving in the First World War that took place between 1914 and 1918. 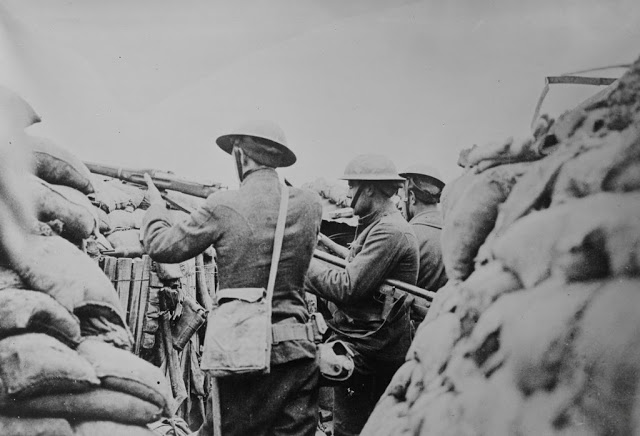 US soldiers keep watch in a trench in France. 1918 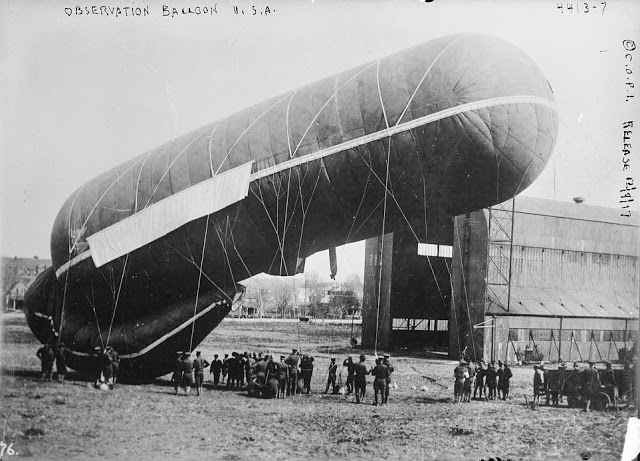 An American World War I observation balloon is seen on Dec. 9, 1917. 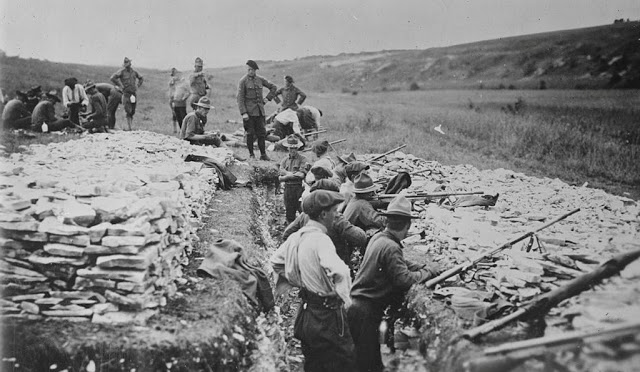 US troops are seen taking grenade gun training in France during the First World War. 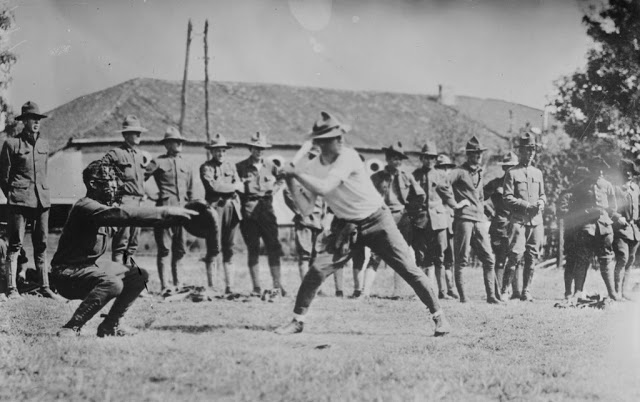 US soldiers are captured playing baseball as they take a break from life in the trenches. 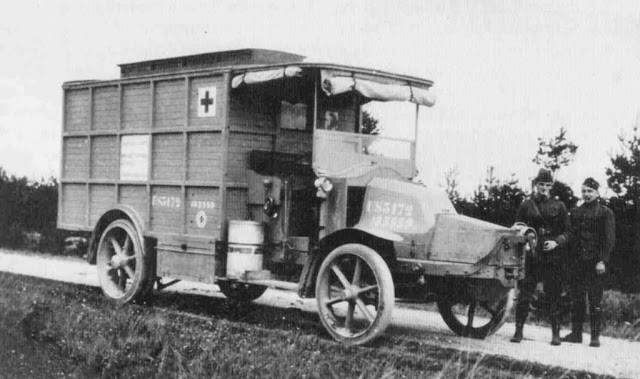 A Renault truck outfitted with mobile X-ray equipment to help doctors in the field is seen in this World War I photo. 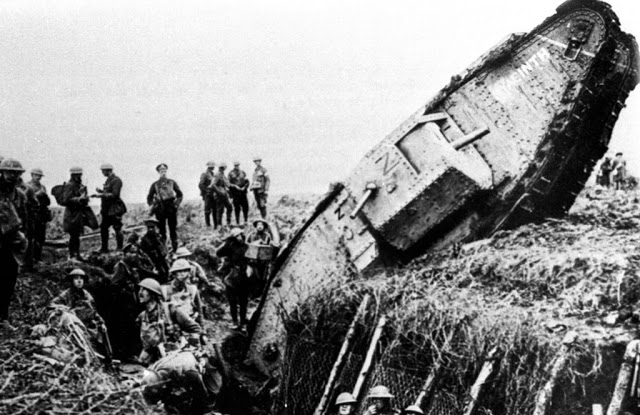 Tanks were developed to barrel over trenches filled with soldiers. Here, a British Mark IV tank didn’t quite make it during the British-German Battle of Cambrai in France, Nov. 20, 1917. 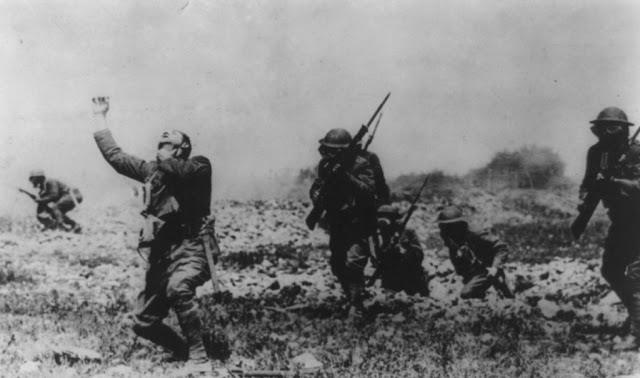 American soldiers can be seen in the midst of a gas attack in this chilling photo from the First World War. 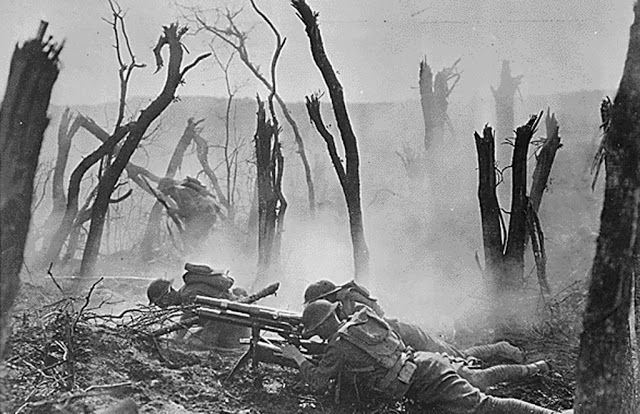 An American gun crew from Regimental Headquarters Company, 23rd Infantry, fires a 37mm gun during an advance against German entrenched positions in an undated photo taken during World War I. 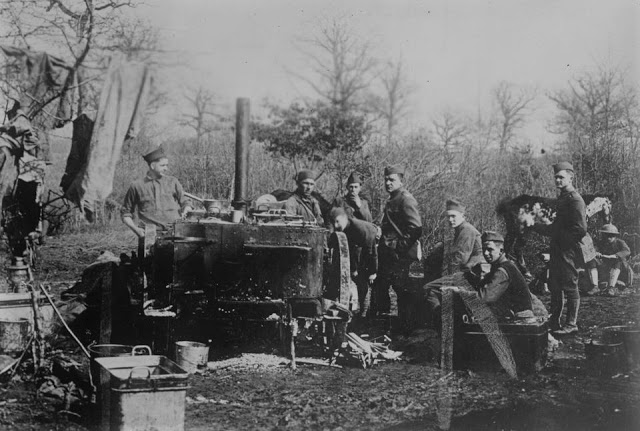 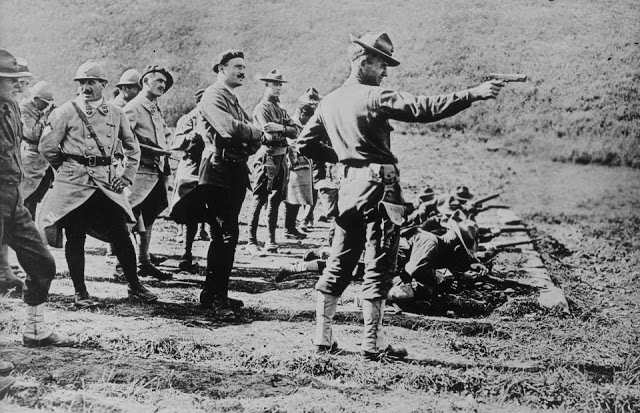 A US Marine leads training on a French shooting range during the conflict that raged in Europe in the early 20th century. 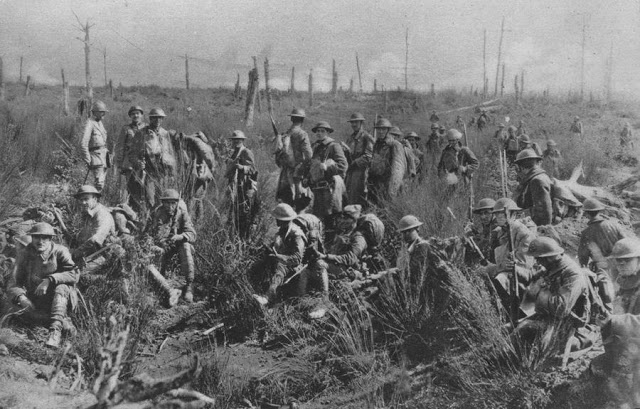 US soldiers of the American Expeditionary Force are gathered together during a pause in the fighting, 1918. 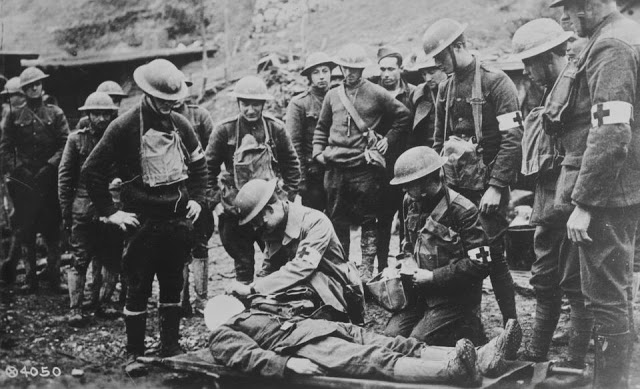 An American Expeditionary Force doctor tends to an injured US soldier immediately behind the first trench line in France. 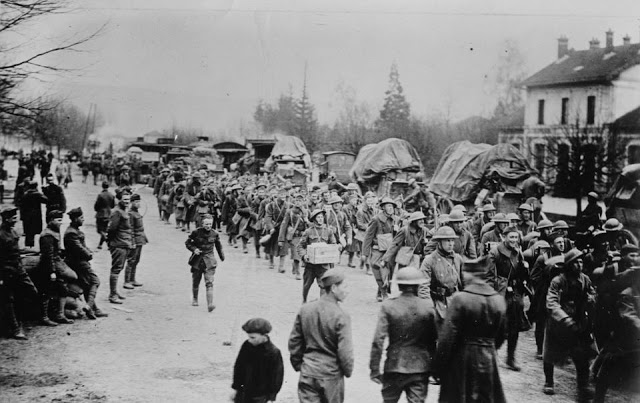 American troops are seen marching down a road in an unspecified location in France after joining the war effort. 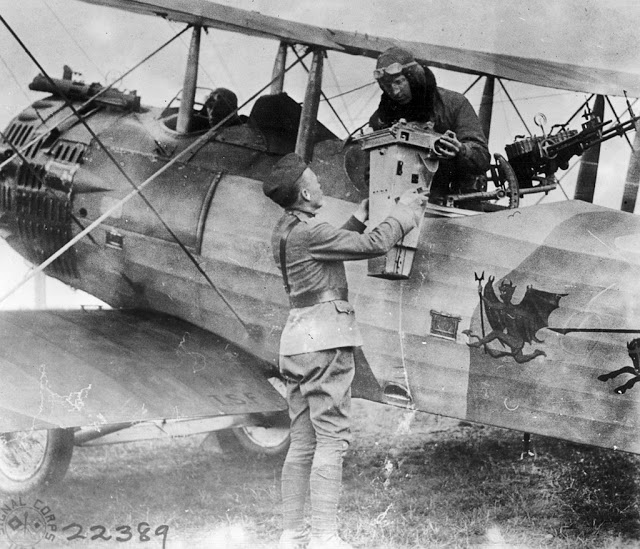 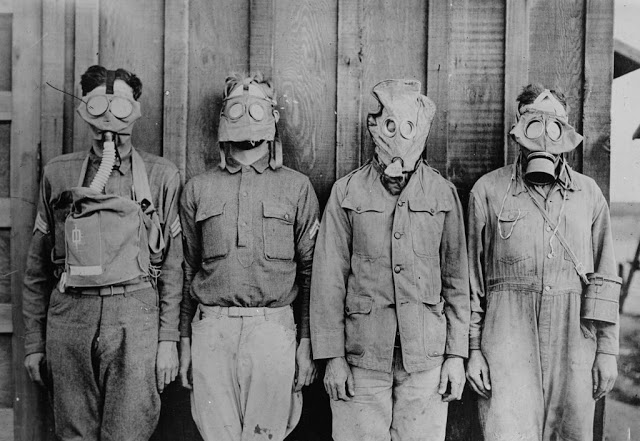 American, British, French and German gas masks are seen in an undated photo taken during World War I. 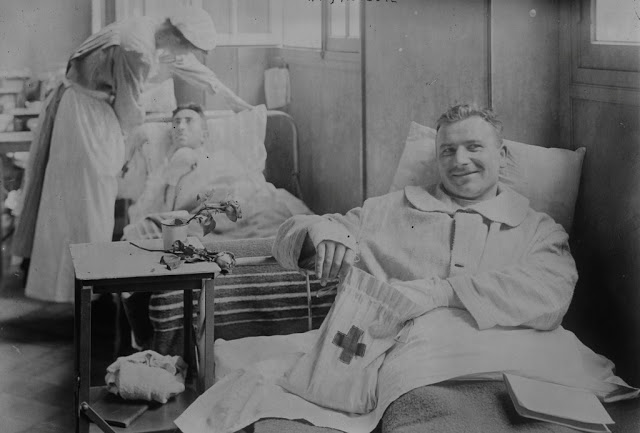 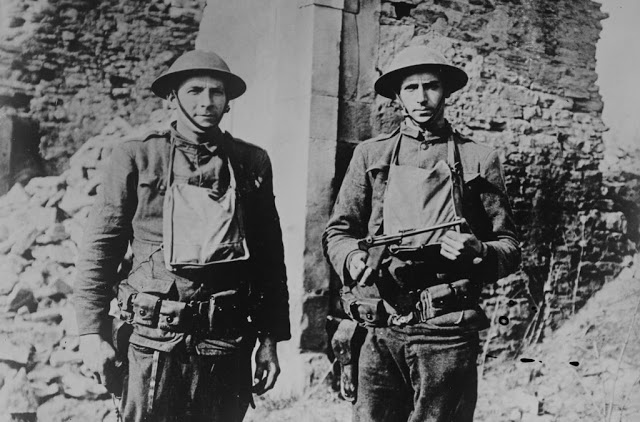 US soldiers Corporal Howard Thompson and James H White were part of a group that killed and captured several Germans in no man's land - the area between the opposing trench lines.

(Images courtesy of the Library of Congress/Handout via Reuters, via PBS)

Posted by Yesterday Today at 11:32 AM