'Wait for Me, Daddy' – The Story Behind One of Canada's Most Famous Photos During World War II

It's October 1, 1940 and Province photographer Claude P. Dettloff is standing on Columbia Street at 8th Street in New Westminster, his press camera up to his eye, preparing to take a shot. He's focusing on a line of hundreds of men of the B.C. Regiment marching down 8th to a waiting train. Soldiers of the Duke of Connaught's Own Rifles are marching past. Suddenly, in the view-finder, Detloff sees a little white-haired boy tugging away from his mother's grasp and rushing up to his father in the marching line ... click. 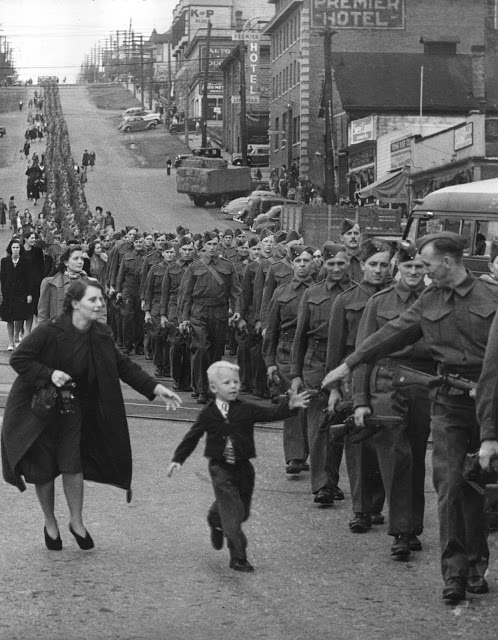 'Wait For Me, Daddy' has become one of the most famous photographs in Canadian history. It was printed in Life magazine and was hung in every classroom across B.C. during the war years. (Claude Dettloff)


'Wait For Me, Daddy' becomes the most famous Canadian picture of the Second World War, and one of the most famous of all war pictures. And it was a fluke, a one-in-a-million shot.

The Royal Canadian Mint issued a general-circulation $2 coin with an engraved rendition of the famous image; Canada Post put out a postage stamp replicating the photo; and a stylized bronze sculpture has been crafted in Spain.

Ever the pro, Dettloff was prepared as his once-in-a-lifetime opportunity approached on Oct. 1, 1940.

But the challenge was much greater than photographers face today because his equipment was primitive by our standards. The camera was a cumbersome Speed Graphic, weighing about five kilograms. The worst shortcoming was its film capacity: just one piece of film was available at a time. 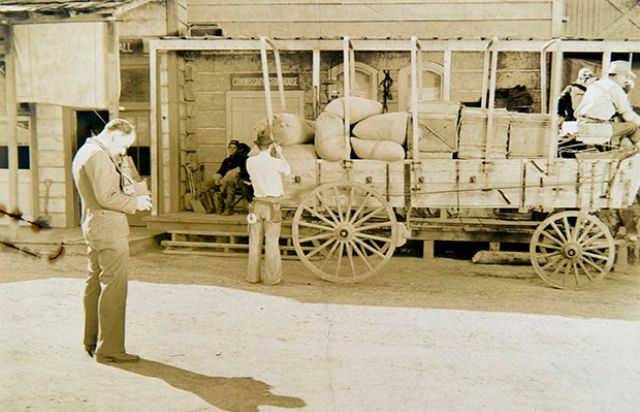 Photo of former Province photographer Claude Dettloff and his camera.

Adding to the challenge was the nature of the event itself. It was really just a bunch of guys marching down a street, as happened thousands of times during the Second World War. There were no celebrities on hand or choice awards being given out.

Fortunately, Dettloff knew exactly what he was looking for, and prepared accordingly.

He explained his rationale in a 1954 radio interview:

“I am a lazy fellow, really. I don’t like to rush around taking dozens of pictures of everything in sight. I like to take my time and wait for Lady Luck to take a hand. As the long line of marching men started down the hill, I could see a second line of wives, children and sweethearts marching with them. I felt that something of a sentimental nature was bound to happen, so I was watching for it. I clicked the shutter of my camera almost without thinking.

“It was the only shot I took. I knew that was it before I even printed it.”

The result was magical!

The mother's outstretched hand and the swirl of her coat, the boy's shock of white hair and his own reaching hand, the father's turning smile and the downward thrust of his own outreaching hand — he has shifted his rifle to his other hand to hold his son's for a moment — the long line of marching men in the background, all this makes an unforgettable image, a masterpiece of unplanned composition, a heart-grabbing moment frozen for all time.

But Warren “Whitey” Bernard, who was five when Claude Dettloff photographed him, doesn't remember October 1st. What he does remember is October 2nd, when the picture appeared in the Province and he was suddenly famous.

Today, more than 70 years later, Whitey Bernard lives in Tofino. Back at the time of the picture, he and his dad Jack and his mom Bernice lived in Vancouver, near General Wolfe Elementary, where little Whitey was in Grade One. (His mom lied about his age to get him in.)

“The picture went everywhere,” Whitey says. “It was a full page in Life, it was in Liberty and Time and Newsweek and the Reader's Digest and the Encyclopaedia Britannica Yearbook and in newspapers everywhere.” Whitey's wife, Ruby, nods. “It was hung in every school in B.C. during the war,” she says, laughing. “I saw him years and years before we actually met.”

The photo caught the attention of the military.

“They were holding War Bond drives,” Whitey says, “and they asked Mom for permission to include me in some of them. They were six weeks long, and so I had to be excused from school. They had entertainers and put on shows. I remember meeting Edgar Bergen and 'talking' to his dummies, Charlie McCarthy and Mortimer Snerd, and there were local entertainers, too: Barney Potts, Thora Anders, Pat Morgan, and I'd come out at the end in front of a big blowup of the picture with a fellow dressed up as my dad. I'd stand there in my dressy blue blazer and short grey pants, they put me in short pants, and give a little speech, and I'd end by asking everyone to buy war bonds to help Bring My Daddy Home. That got everyone all misty-eyed and they'd rush up to buy bonds.”

Whitey's dad came home in October 1945 and Claude Dettloff-now the Province's chief photographer-took a photograph of their reunion at the CNR station. 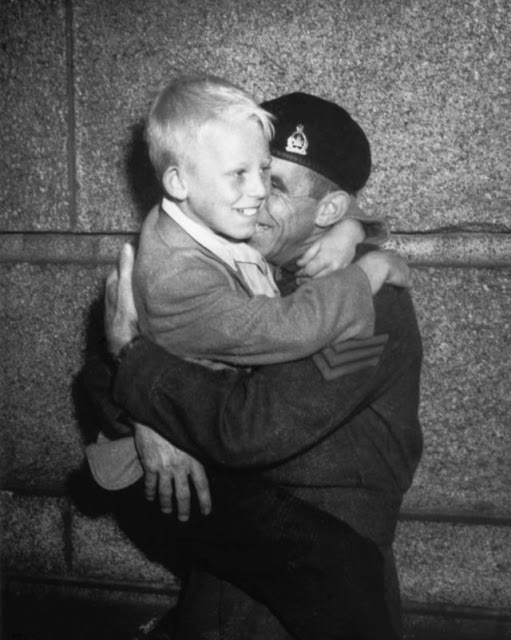 Not long after Whitey and Ruby Johnson married in 1964, he got involved in local politics. He was elected alderman, was mayor for several years in the 1980s and then went back as councillor. Today, he's retired. His son Steven runs the business that Whitey started long ago, a small marina, marine hardware and fuel station.

Posted by Yesterday Today at 6:05 PM