Images of Americans who fought in the Revolution are exceptionally rare because few of the Patriots of 1775-'83 lived until the dawn of practical photography in the early 1840s; far fewer were daguerreotyped; many, probably most, of such daguerreotypes never carried identification; and finally, the ravages of time have claimed the vast majority of portraits from the 1840s and ‘50s.

According to PetaPixel, in 1864, 81 years after the war, Reverend E. B. Hillard and two photographers embarked on a trip through New England to visit, photograph, and interview the six known surviving veterans, all of whom were over 100 years old. The glass plate photos were printed into a book titled The Last Men of the Revolution.

In 1976, an investigative reporter named Joe Bauman came across Hillard’s photos. Realizing that more photos may have been captured of other veterans in the 40-50 year gap between when photography was invented and when Hillard’s images were made, Bauman set out to find them.

After finding photos of subjects that were about the right age, Bauman dug into their histories to see if they had been involved in the Revolution. In the end, the journalist spent three decades building what is now considered the biggest collection of daguerreotypes showing veterans of the Revolutionary War — a set of eight portraits. 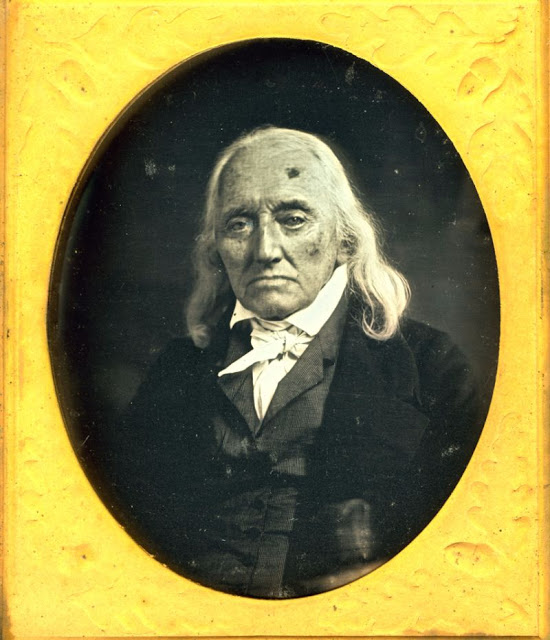 Peter Mackintosh, daguerreotype. Peter Mackintosh was a 16-year-old apprentice blacksmith in Boston working in the shop of his master, Richard Gridley, the night of December 16, 1773 when a group of young men rushed into the shop, grabbed ashes from the hearth and rubbed them on their faces. They were among those running to Griffin’s Wharf to throw tea into the harbor as part of the Boston Tea Party that started the Revolution. Mackintosh later served in the Continental Artillery as an artificer, a craftsman attached to the army who shoed horses and repaired cannons, including one mortar whose repair General George Washington oversaw personally. During his last years, Mackintosh and his lawyers fought for the pension he deserved. The government awarded it to his family only after his death, which was on November 23, 1846 at age 89. (Courtesy of Joseph Bauman) 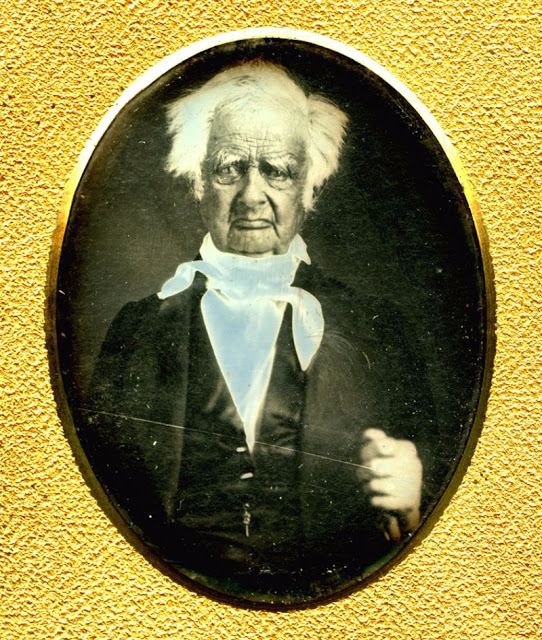 Simeon Hicks, daguerreotype. Simeon Hicks was a Minuteman from Rehoboth, Massachusetts who drilled every Saturday in the year leading up to the war. When he heard the alarm the day after the Battles of Lexington and Concord, the sparks that set off the Revolution, he immediately joined thousands of other New Englanders in sealing off the enemy garrison in Boston. He served several short enlistments and fought in the Battle of Bennington, August 16, 1777. After the war Hicks lived in Sunderland, Vermont as a celebrity. He was the last survivor of the Battle of Bennington. (Courtesy of Joseph Bauman) 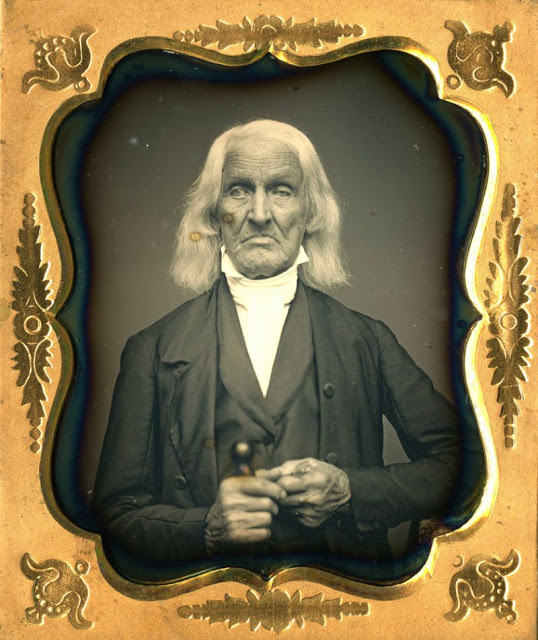 Jonathan Smith, daguerreotype. Jonathan Smith fought in the Battle of Long Island on August 29, 1778. His unit was the first brigade that went out on Long Island, and was discharged in December after a violent snow storm. After the war he became a Baptist minister. He was married three times and had eleven children. The first two wives died and for some reason he left his third wife in Rhode Island to live with two of the children in Massachusetts. On October 20, 1854, he had a daguerreotype taken to give to a granddaughter. He died on January 3, 1855. (Courtesy of Joseph Bauman) 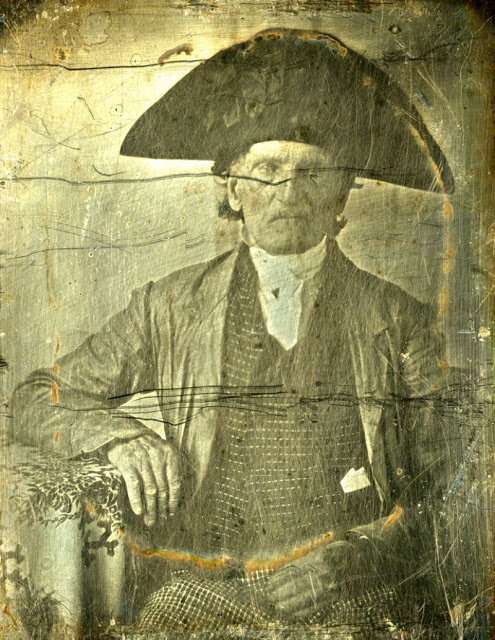 George Fishley, daguerreotype. George Fishley was a soldier in the Continental army. When the British army evacuated Philadelphia and raced toward New York City, his unit participated in the Battle of Monmouth. Later he was part the genocidal attack on Indians who had sided with the British, a march led by General John Sullivan through “Indian country,” parts of New York and Pennsylvania. Fishley’s regiment, the Third New Hampshire, was in the midst of the campaign’s only contested battle. After the Battle of Chemung, August 28, 1779, the Americans had devastated forty Indian towns and burned their crops. Later Fishley served on a privateer — a private ship licensed to prey on enemy shipping — and was captured by the British. Fishley was a famous character after the war in Portsmouth, New Hampshire, where he lived. He was known as “the last of our cocked hats” — Continental soldiers wore tall, wide, Napoleonic-looking headgear with cockades. He marched in parades wearing the hat, which his obituary said “almost vied in years with the wearer.” Fishley is wearing the hat in the daguerreotype. (Courtesy of Joseph Bauman) 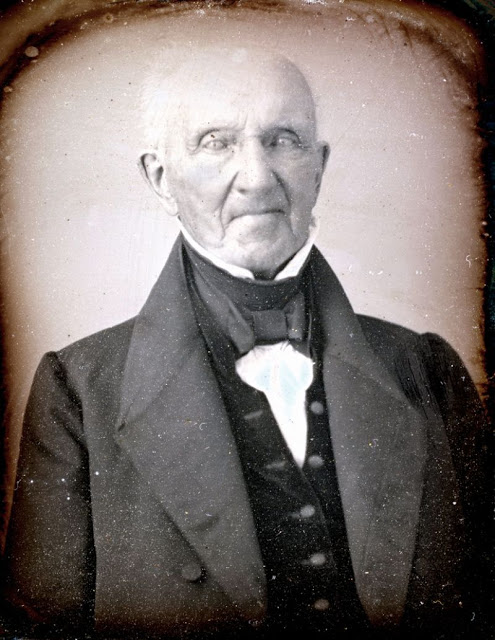 James W. Head, daguerreotype. James W. Head, a Boston youth, joined the Continental Navy at age 13 and served as a midshipman aboard the frigate Queen of France. When Charleston, South Carolina, came under attack, five frigates, including the Queen of France, and several merchant ships were sunk in a channel to prevent the king’s troops from approaching the city from one strategic direction. Head and other sailors fought as artillerymen in forts and were captured when the Americans surrendered — the Patriots’ biggest and arguably most disastrous surrender of the war. Taken as a prisoner of war, Head was released at Providence, Rhode Island and walked home. His brother wrote that when he arrived, Head was deaf in one ear and had hearing loss in the other from the cannons’ concussion. Settling in a remote section of Massachusetts that later became Maine, he was elected a delegate to the Massachusetts convention in Boston that was called to ratify the Constitution. When he died he was the richest man in Warren, Maine and stone deaf because of his war injuries. (Courtesy of Joseph Bauman) 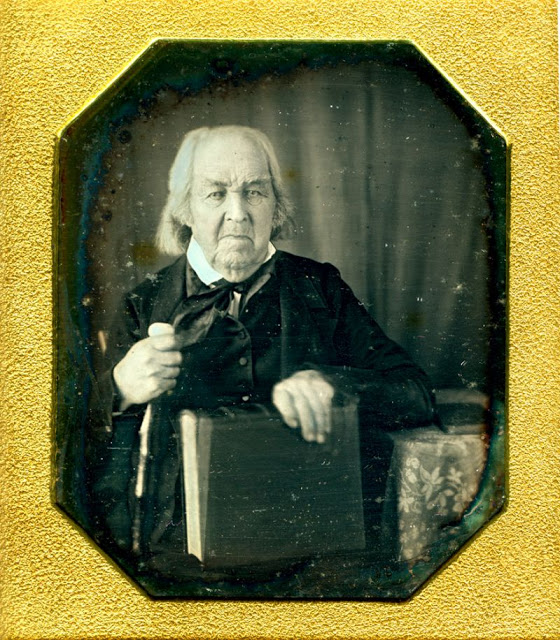 Rev. Levi Hayes, daguerreotype. Rev. Levi Hayes was a fifer in a Connecticut regiment that raced toward West Point to protect it from an impending attack. He also participated in a skirmish with enemy “Cow Boys” at the border of a lawless region called the Neutral Ground (most of Westchester County, New York, and the southwestern corner of Connecticut). In the early years of the nineteenth century, he helped organize a religiously-oriented land company that headed into the wilderness of what was then the West. They settled Granville, Ohio, where he was the township treasurer and a deacon of his church. His daguerreotype shows him holding a large book, most likely a Bible. (Courtesy of Joseph Bauman) 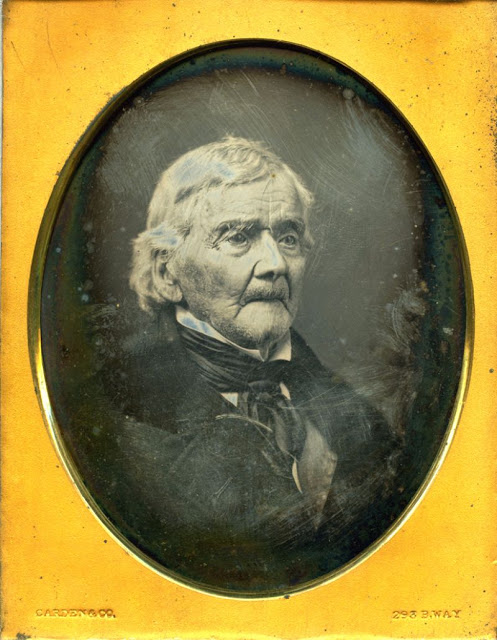 Daniel Spencer, daguerreotype. Daniel Spencer served as a member of the backup troops sent to cover the operatives in a secret mission to capture Benedict Arnold, after he had defected to the British. The maneuver failed when Arnold shifted his headquarters. A member of the elite Sheldon’s Dragoons, Spencer was in a few skirmishes. He sat up all night fanning his commanding officer, Captain George Hurlbut, who had been shot in a fight during which the British captured a supply ship. Spencer’s account of the death of the officer differed markedly from that of Gen. Washington's; Spencer said the wounds of the officer had nearly healed when he caught a disease from a prostitute and this illness killed him, whereas Washington said he died of his wounds. Spencer’s pension was revoked soon after it was granted and for years he and his family lived in severe poverty. Eventually his pension was restored. He was the guest of honor during New York City’s celebration of July 4, 1853. (Courtesy of Joseph Bauman) 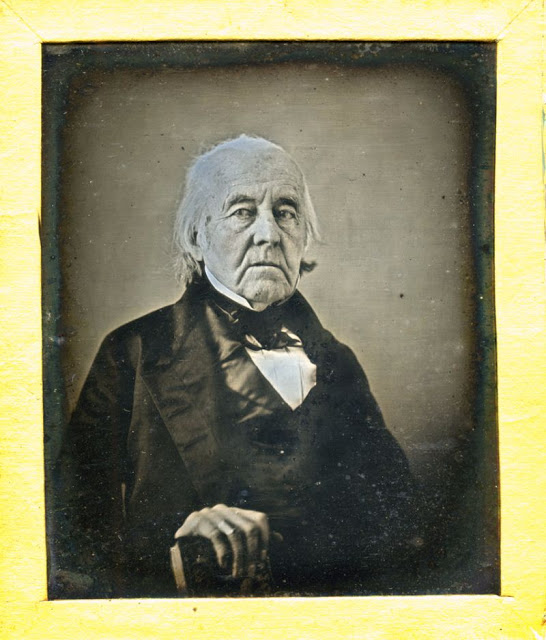 Dr. Eneas Munson, daguerreotype. As a boy, Dr. Eneas Munson knew Nathan Hale, the heroic spy who was executed and said he regretted that he had only one life to give for his country. As a teenager, Munson helped care for the wounded of his hometown, New Haven, Connecticut, after the British invaded. He was commissioned as a surgeon’s mate when he was 16 years old, shortly before he graduated from Yale. He extracted bullets from soldiers during battle. In 1781 he was part of Gen. Washington’s great sweep to Yorktown, Virginia, which led to Gen. John Burgoyne’s surrender and American victory of the Revolution. During the fighting at Yorktown he was an eyewitness to actions of Gen. Washington, Gen. Knox, and Col. Alexander Hamilton. Dr. Munson gave up medicine after the war and became a wealthy businessman, fielding trading ships, underwriting whalers and sealers, and venturing into real estate and banking. But throughout his life, his family spoke of how he loved recalling the exciting days of the war, when he was a teenage officer. (Courtesy of Joseph Bauman) 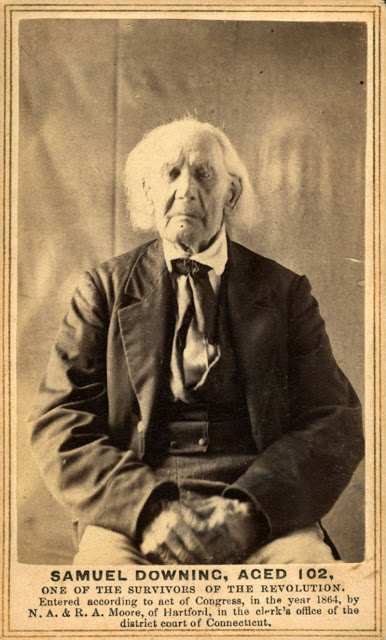 Samuel Downing, CDV card photo. Samuel Downing enlisted at age 16, and served as a private from New Hampshire. At the time his picture was made, he as 102 and living in the town of Edinburgh, Saratoga Country, New York. He died on February 18, 1867. (N. A. and R. A. Moore, Courtesy of Joseph Bauman) 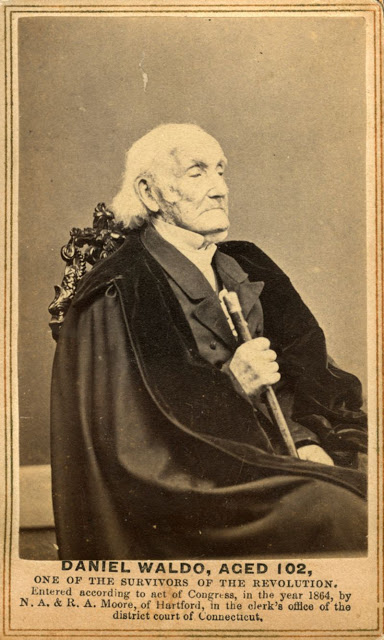 Rev. Daniel Waldo, CDV card photo. Rev. Daniel Waldo was drafted in 1778 for a month of service in New London. After that, he enlisted for an additional eight months, and in March 1779 was taken prisoner by the British at Horseneck. After he was released, he returned to his home in Windham and took up work on his farm again. (N. A. and R. A. Moore, Courtesy of Joseph Bauman) 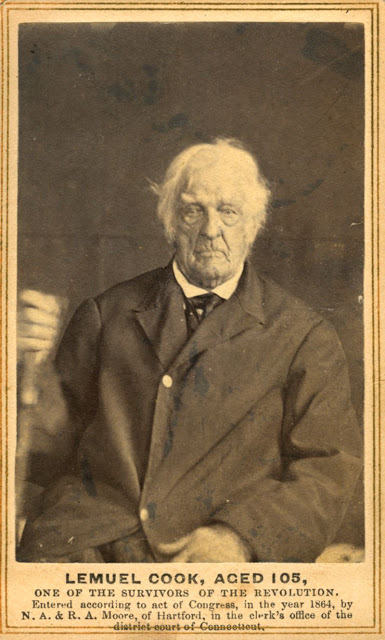 Lemuel Cook, CDV card photo. Lemuel Cook witnessed the British surrender at Yorktown, the event that guaranteed American independence. Of the event, he said, “Washington ordered that there should be no laughing at the British; said it was bad enough to surrender without being insulted. The army came out with guns clubbed on their backs. They were paraded on a great smooth lot, and there they stacked their arms.” (N. A. and R. A. Moore, Courtesy of Joseph Bauman) 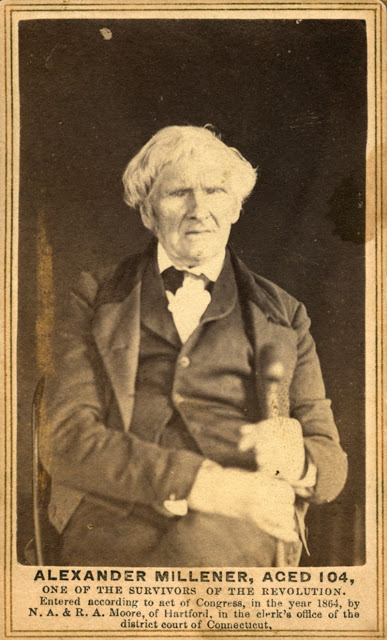 Alexander Milliner, CDV card photo. Alexander Milliner enlisted as a drummer boy who served in Gen. Washington’s Life Guard unit. He was a favorite of Washington’s, often playing at his personal request. Milliner was at the British surrender at Yorktown, about which he said, “The British soldiers looked down-hearted. When the order came to ‘ground arms,’ one of them exclaimed, with an oath, ‘You are not going to have my gun!’ and threw it violently on the ground, and smashed it.” (N. A. and R. A. Moore, Courtesy of Joseph Bauman) 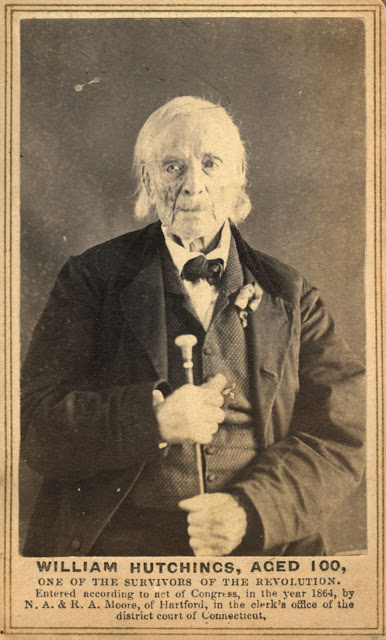 William Hutchings, CDV card photo. William Hutchings enlisted at age 15 for the coastal defense of his home state, New York. Writes Hillard in The Last Men of the Revolution, “The only fighting which he saw was the siege of Castine, where he was taken prisoner; but the British, declaring it a shame to hold as prisoner one so young, promptly released him.” (N. A. and R. A. Moore, Courtesy of Joseph Bauman)