In the life of a 1940s teenager, there was a war going on, but it was something that only seemed to effect their parents. With outside life oblivious to them and marketers still trying to identify this new teen-age demographic the fashions that real teens wore and what was marketed to them were quite different.

These interesting photographs below were taken by LIFE photographer Nina Leen for a December 1944 article, "Teen-Age Girls: They Live in a Wonderful World of Their Own." Leen focused on a group of 12 girls, from 15 to 17 years old, living in Webster Groves, Missouri, a suburb of St. Louis.

In its December 1944 feature, LIFE breathlessly discussed the "teen-age" phenomenon in language that somehow feels naive, chauvinistic, celebratory and insightful, all at once. That so many of the article's impossibly broad, sweeping claims ("Some 6,000,000 U.S. teen-age girls live in a world all their own: a lovely, gay, enthusiastic, funny and blissful society. . . .") clearly apply to a specific type of teenager — i.e., white, middle-class — tends to blunt some of the more incisive observations. But taken as a whole, the LIFE article and Leen's photographs constitute a fascinating, early look at a segment of the American populace that, over the ensuing decades, for better and for worse, has assumed an increasingly central role in the shaping of Western culture. 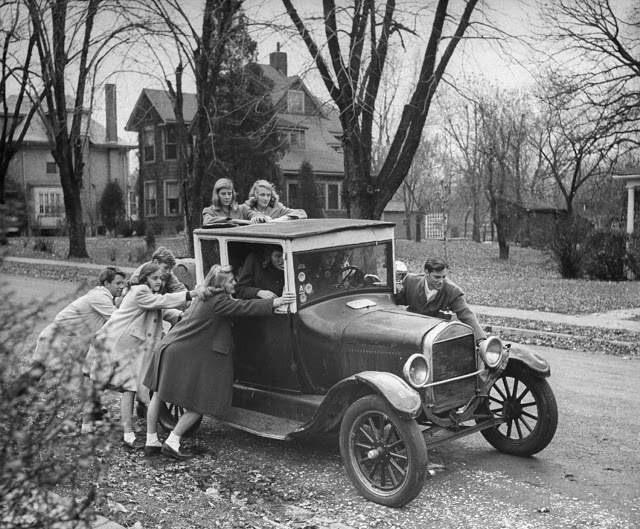 Gang of teen-agers push boyfriend's model T to get it started. Car is 17 years old and can hold 12 boys and girls. Favorite ride is out to football game. 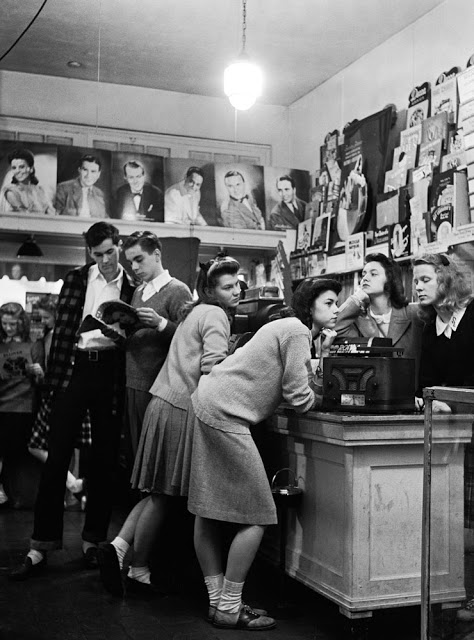 Listening to records at Lemeke's record store occupies at least one afternoon a week. The girls spend one to 2 1/2 hours listening to two dozen records, end up by buying one or, at most, two. 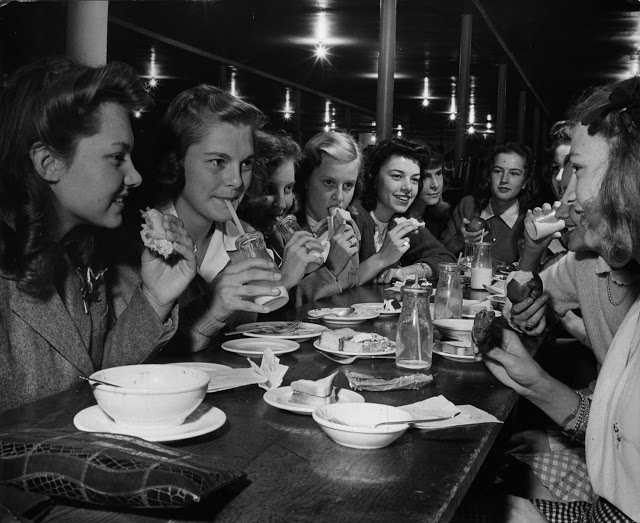 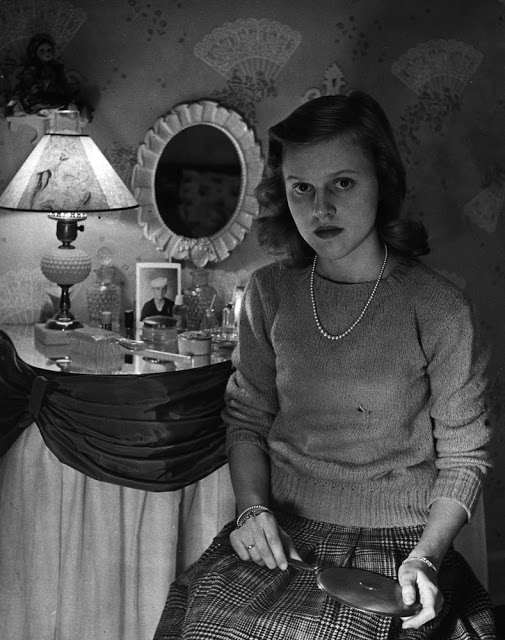 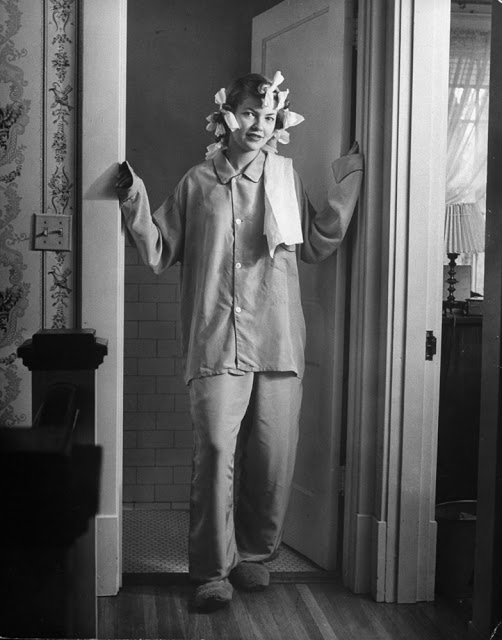 Men's pajamas are worn at night. Hair is curled with rags, not bobby pins. 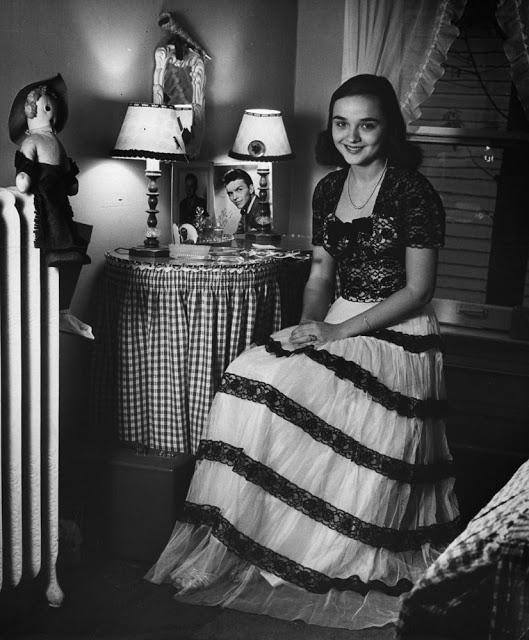 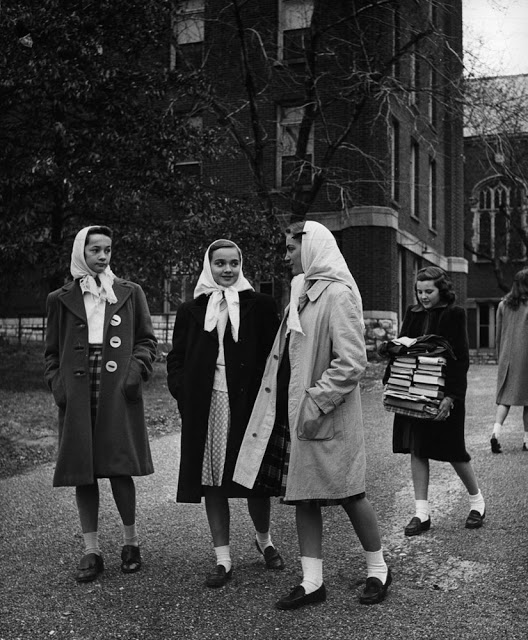 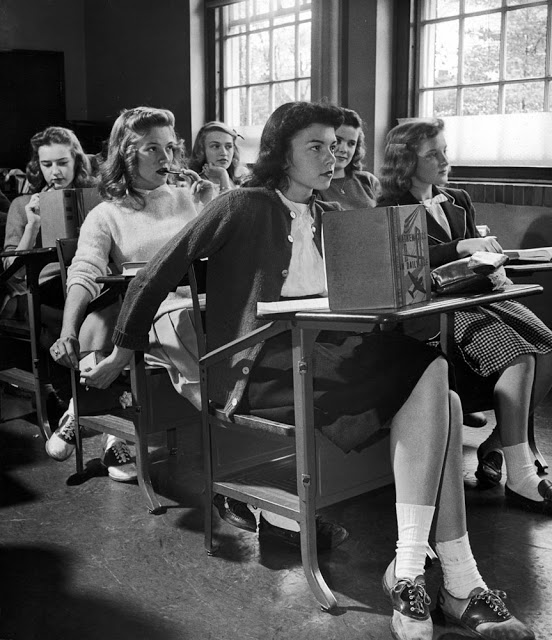 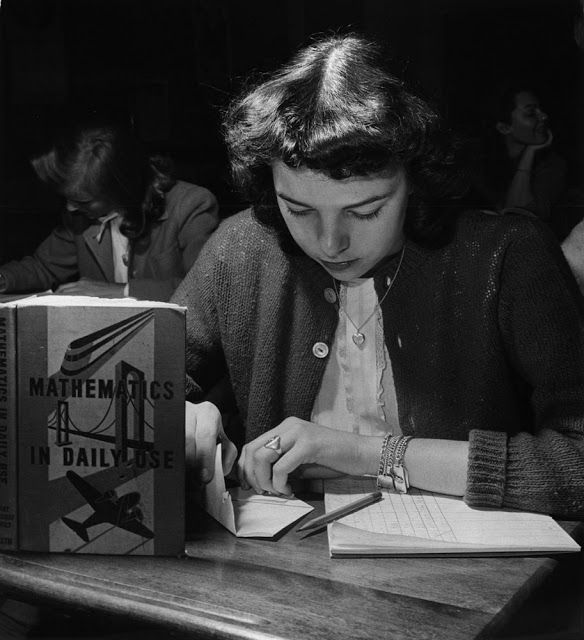 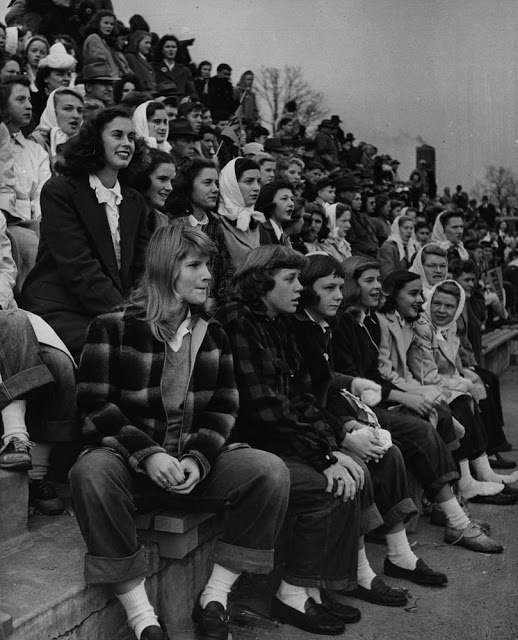 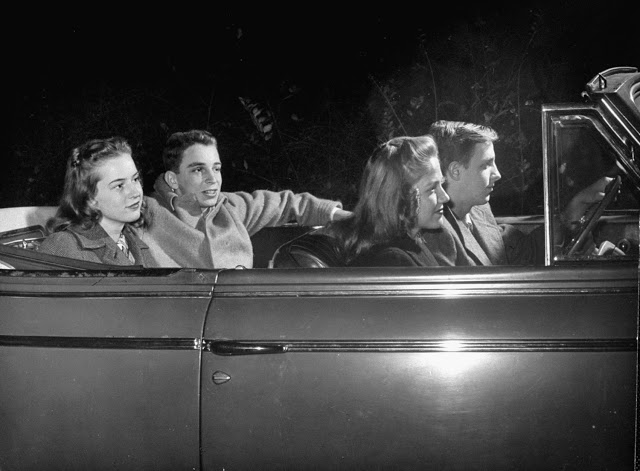 Occasional 'A' coupon makes possible a date at the Toll House a few miles away. Girls like double dates so they can stay with each other afterward and gab all night about the boys. 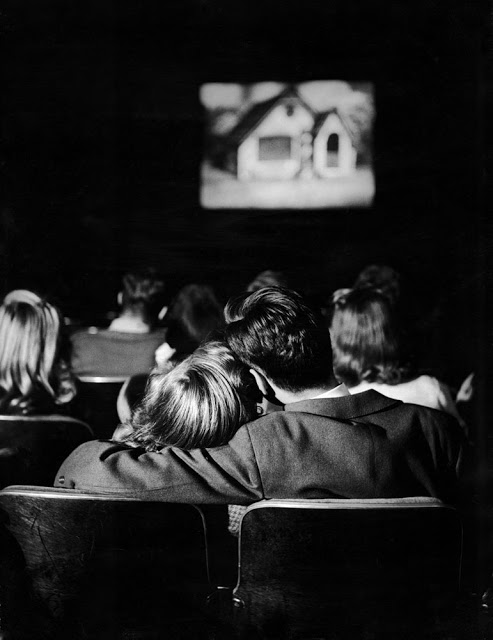 Necking in movies is absolutely out. Any girl who does is the object of endless catting and is put down as trying to act older or sophisticated, which is highest offense among teen-agers. 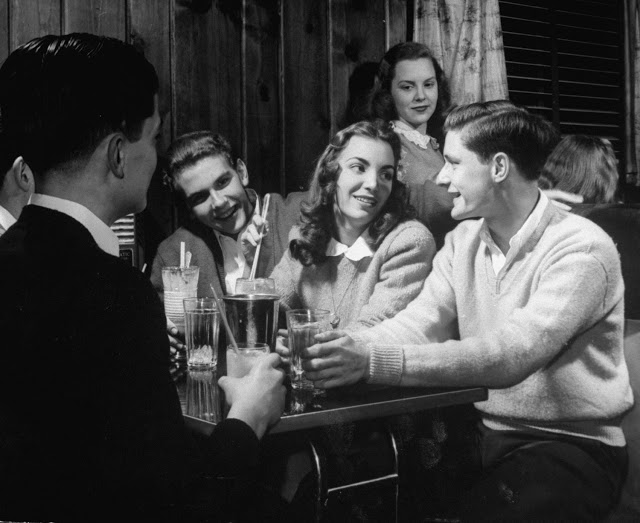 "Sandwich Girl' who puts herself in midst of crowd of boys is considered a real crumb. Girls will not invite her to hen parties and will try to act cool toward boys who formed sandwich. 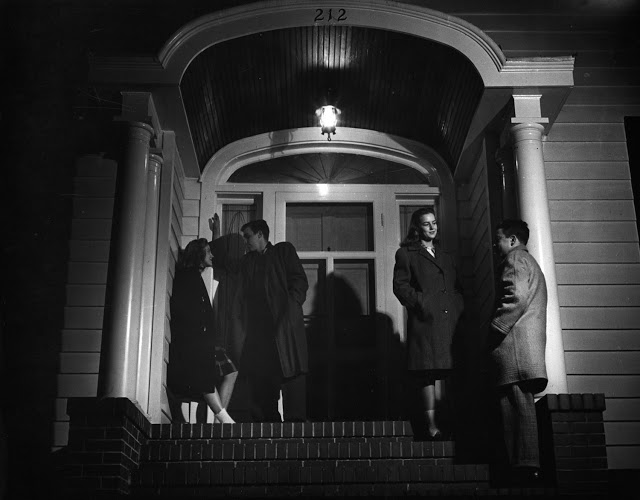 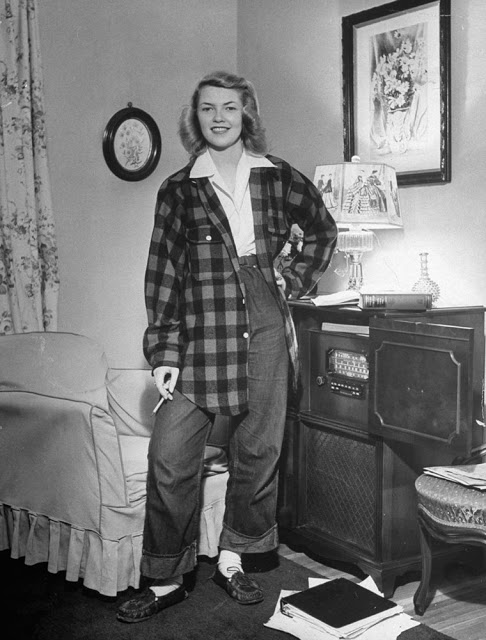 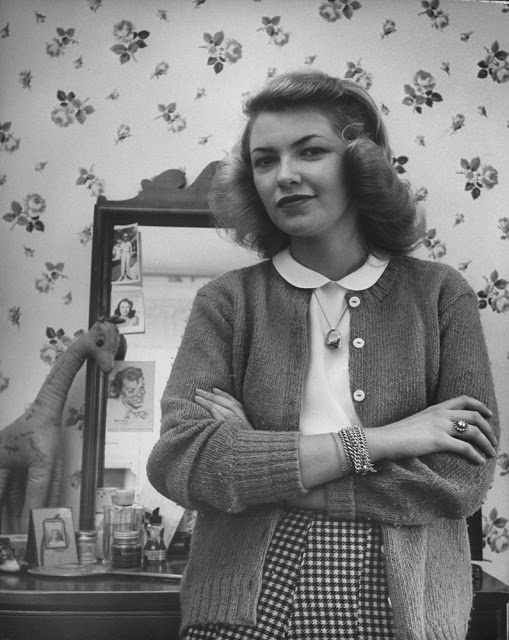 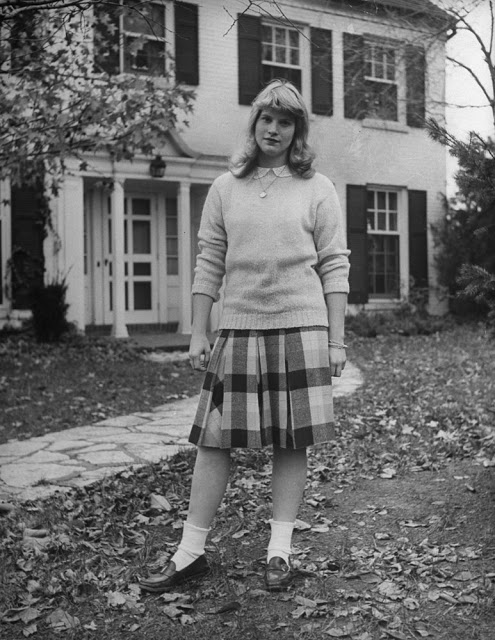 The standard dress for school is a plain shetland sweater and a woolen skirt. 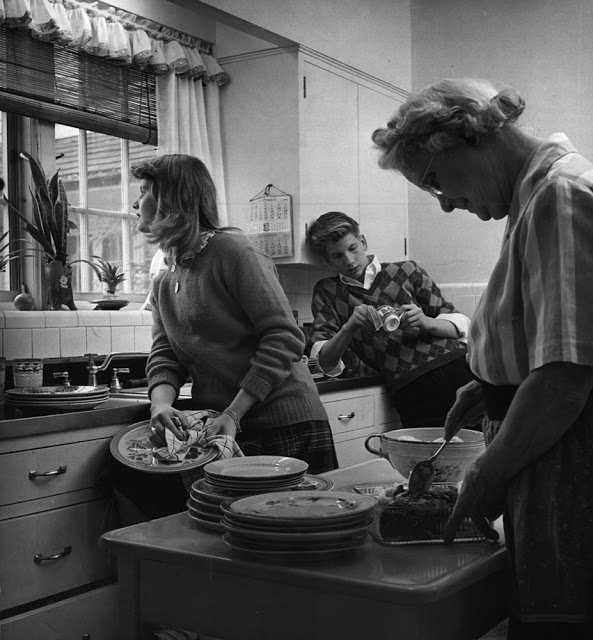 Portrait of an American family, Missouri, 1944. 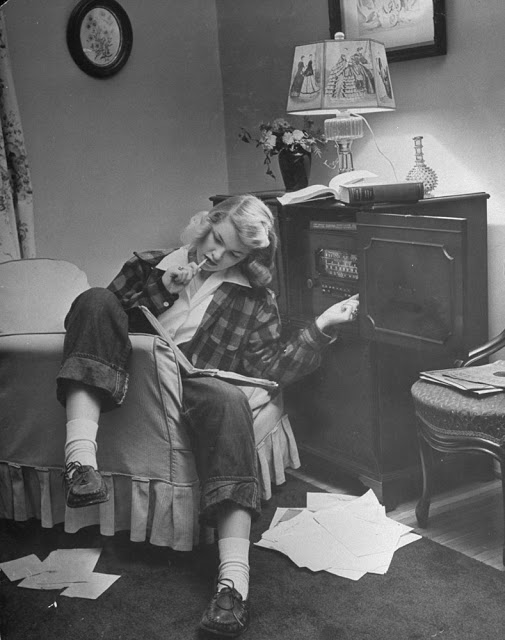 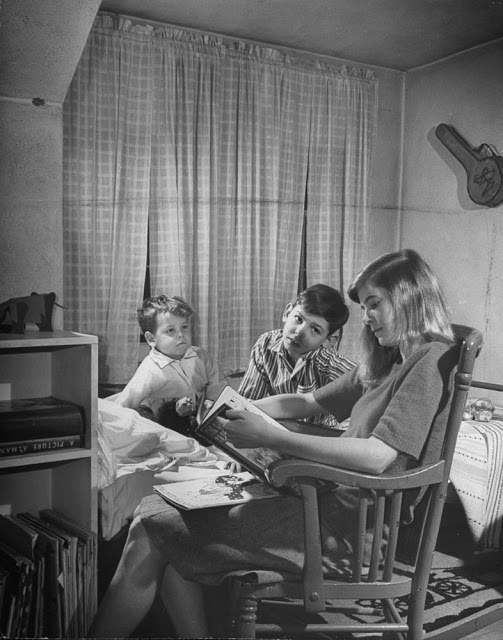 Babysitting is the teen-agers' way to augment their $2-$3 weekly allowance which must cover lunches, movies, sodas, records. Their rates are $.25 an hour before midnight, $.35 an hour after. 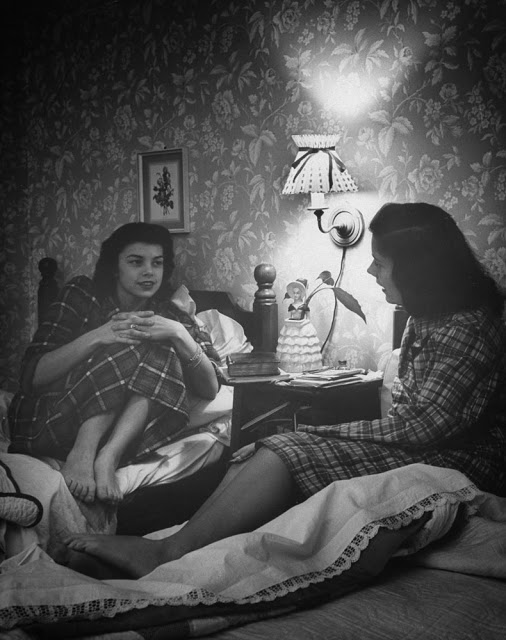 One girl usually stays overnight with hostess after a hen party. No girl can bear to be alone after a gab fest so teen-agers wheedle twin beds for their rooms to accommodate guests. 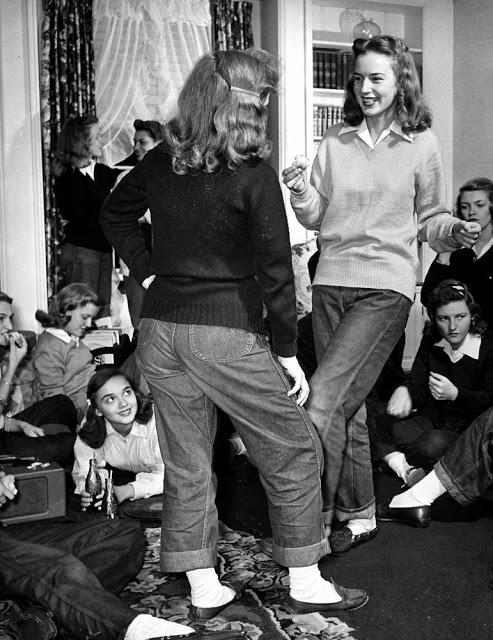 At Friday-night hen party Martha Ruddy and Fredna Parker jig around to music. When not dancing, girls sprawl on floor talking, singing, knitting and nibbling endlessly at pretzels. 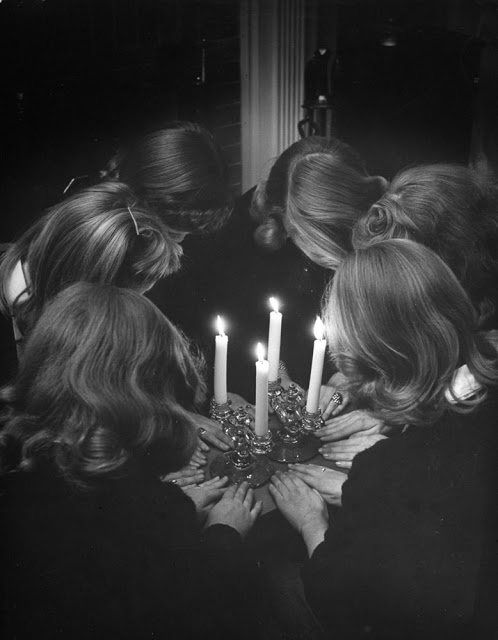 Initiation to high-school sorority is awesome, serious, secret. Here girls re-enact candle-light ceremony for LIFE's photographer. Nobody but a member has ever seen the real thing.

Posted by Yesterday Today at 9:21 AM