Each November beginning in 1928, Hollywood merchants transformed a one-mile stretch of Hollywood Boulevard between Vine and La Brea into Santa Claus Lane to boost shopping. Part of the promotion was a daily parade featuring Santa Claus and a film star.

The first year, 100 living firs were dug up from the forest near Big Bear and placed along Hollywood Blvd. in wooden planters. Once fully dressed in nearly 10,000 incandescent light bulbs, the trees lit the path for a nightly parade. Joined on his sleigh by a silver screen star, Santa Claus greeted passersby as a team of six live reindeer pulled him down the boulevard. After New Year’s Day, the trees were replanted on the grounds of the Hollywood Bowl.

In later years, metallic decorations replaced the living trees. Drawings of film stars’ faces smiled at shoppers from the center of tin wreaths hung from lampposts. Whimsical, shiny toy Christmas trees blinked with colorful lights. At the annual promotion’s peak, organizers boasted that Hollywood Blvd. was the most brightly lit street in the nation.

To complete the wintertime transformation, Hollywood Blvd. took on a new name. For one month, signs at intersections read “Santa Claus Lane,” and merchants updated their street addresses to reflect the temporary name change.

Though the elaborate decorations are no more, Santa Claus Lane gave birth to a Tinseltown tradition that survives today. In 1931, the Hollywood Chamber of Commerce expanded Santa Claus’ nightly procession into an annual extravaganza, since renamed the Hollywood Christmas Parade. And in 1946, grand marshal Gene Autry, who rode on horseback just paces in front of the parade’s main star, turned the screams of delight he heard from children into a classic holiday tune: “Here Comes Santa Claus (Right Down Santa Claus Lane).” 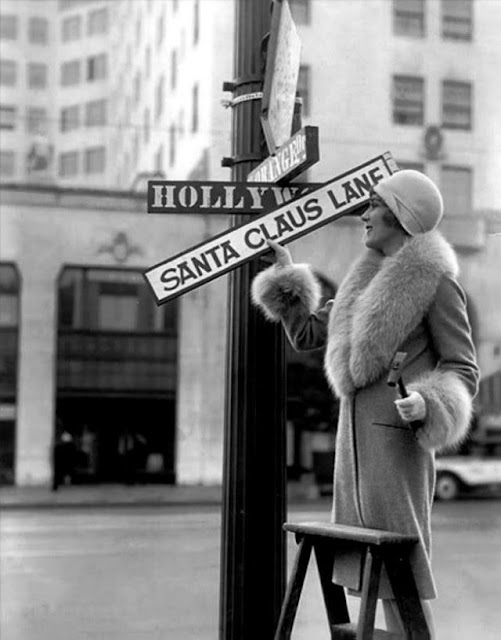 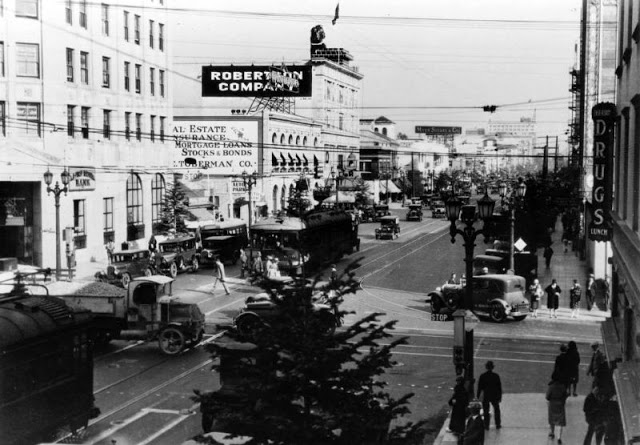 Daytime view of the fir trees along Santa Claus Lane in 1928. 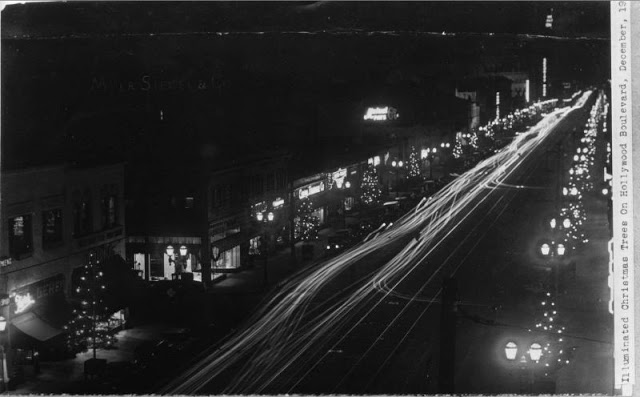 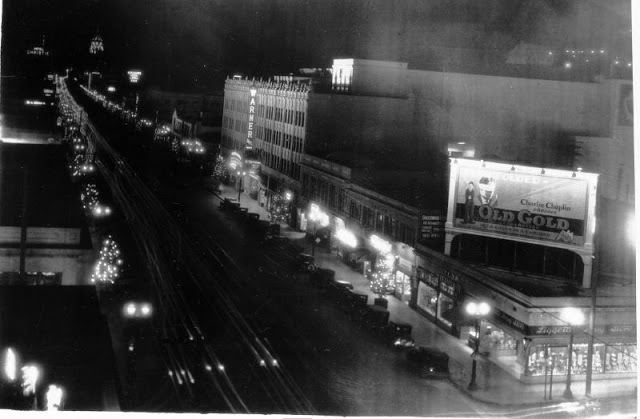 Another view of Hollywood Boulevard as Santa Claus Lane in 1928. 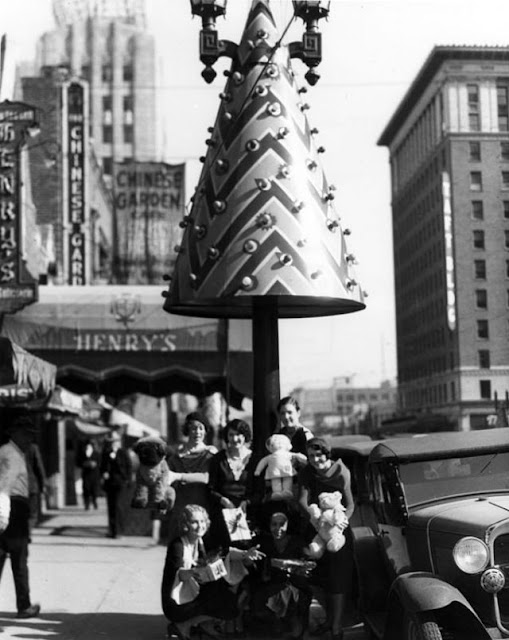 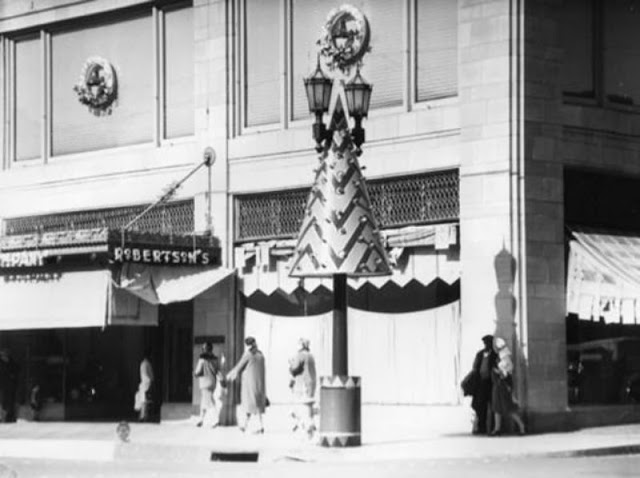 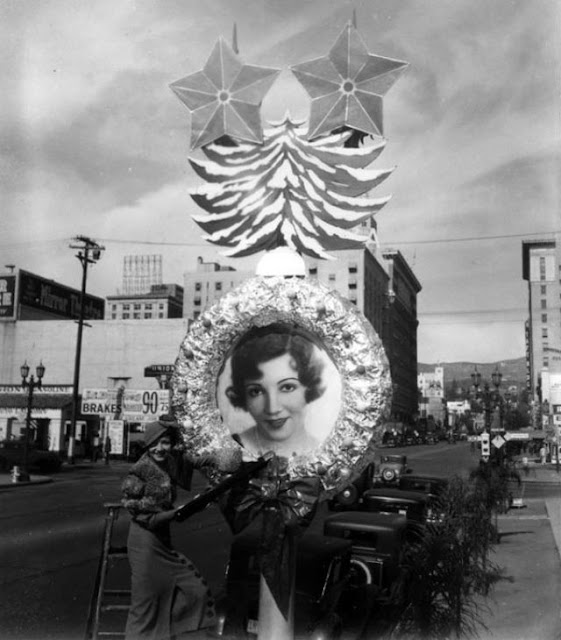 Sophisticated and charming, Colbert gave her parts a down-to-earth common sense and humorous attitude. She earned an Academy Award for her role in It Happened One Night (1934). 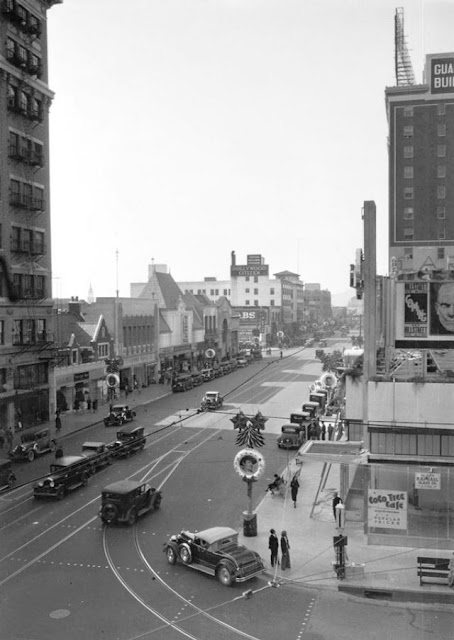 Birdseye view of Santa Claus Lane and Vine Street in 1932. 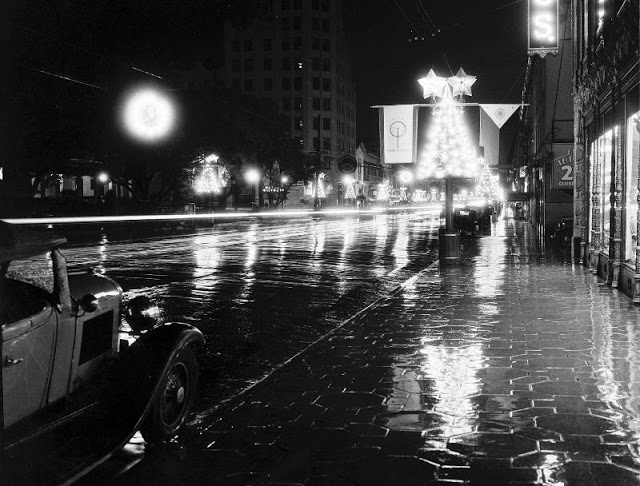 View of a wet Hollywood Boulevard decorated for the holidays, 1935. 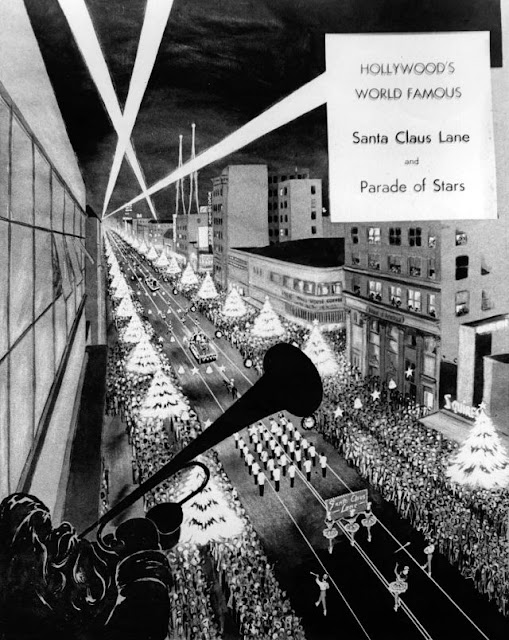 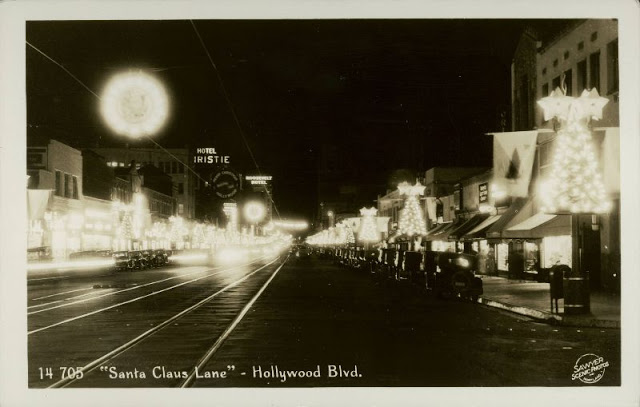 Postcard of Santa Claus Lane in 1936. 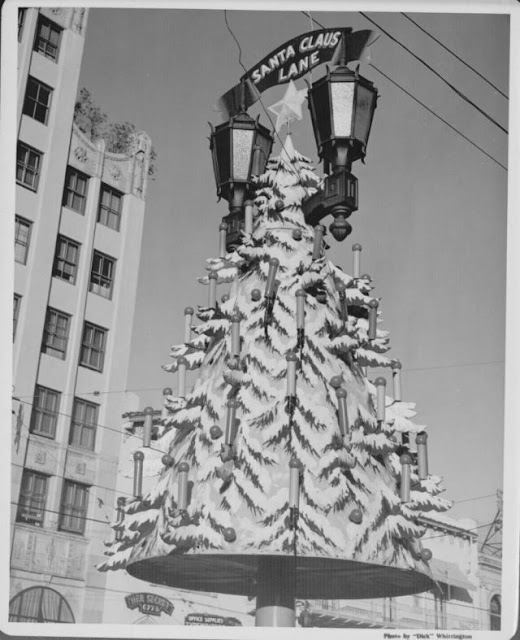 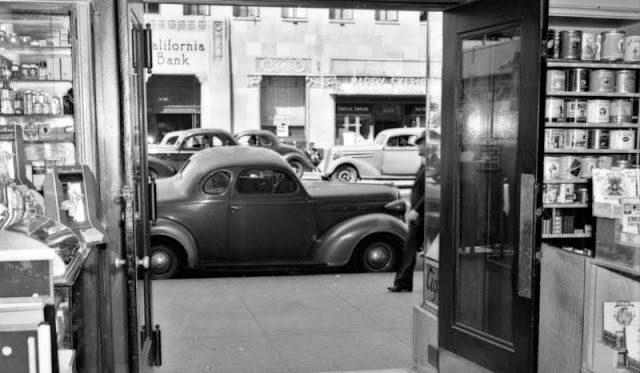 Looking north from the Owl Drug Store at 6290 Hollywood Boulevard, 1940. California Bank and the Equitable Building can be seen across the street. 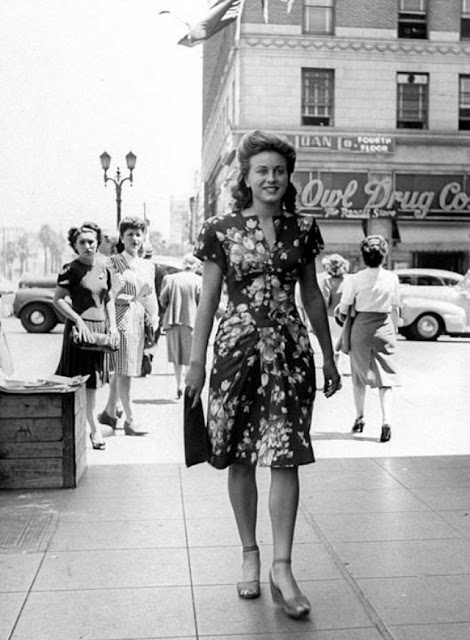 A woman in a fashionable dress walking west on the south side of Hollywood Boulevard just west of Vine Street, 1944. 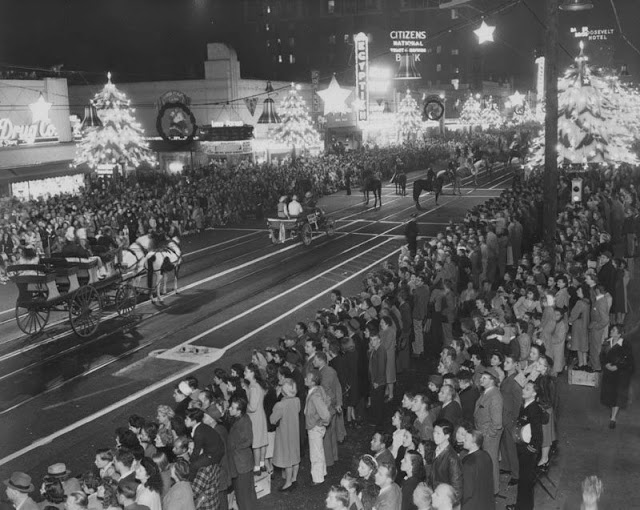 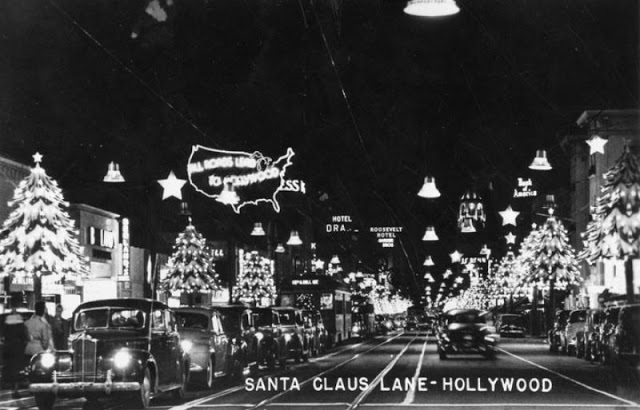 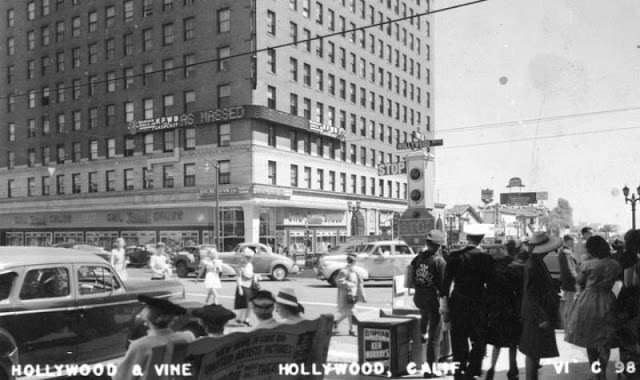 A crowd looking at the electric billboard on the Taft Building, 1945. The view is from the north-west corner of Hollywood and Vine looking south-east. An early traffic sign is in the foreground and in the background the distinctive “hat” of the Brown Derby sign is visible. 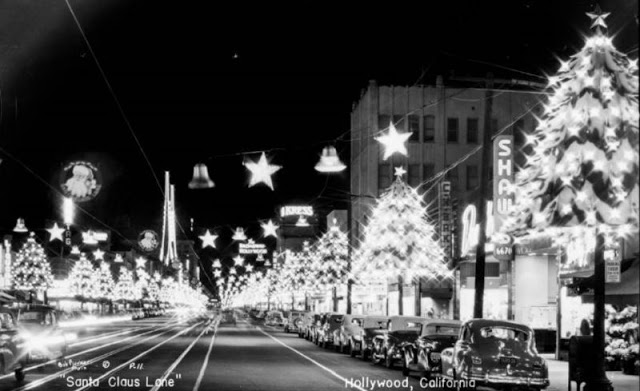 A well-lit Hollywood Boulevard during the Holiday Season, 1946. The Broadway Building and Kress building are in the distance, and Shaw’s can be seen at right. 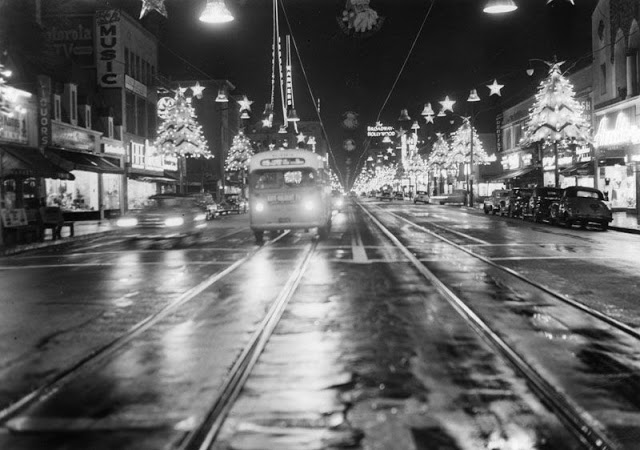 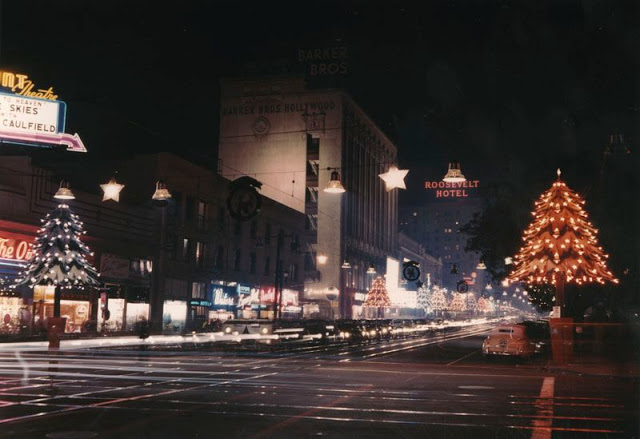 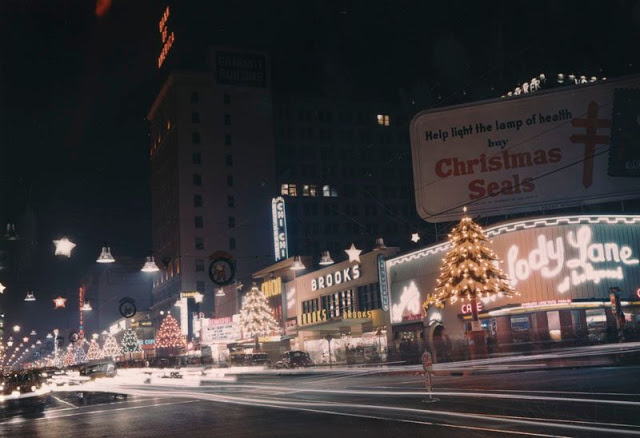 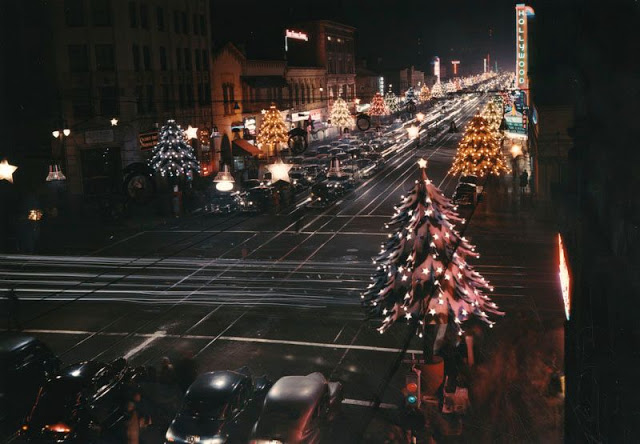 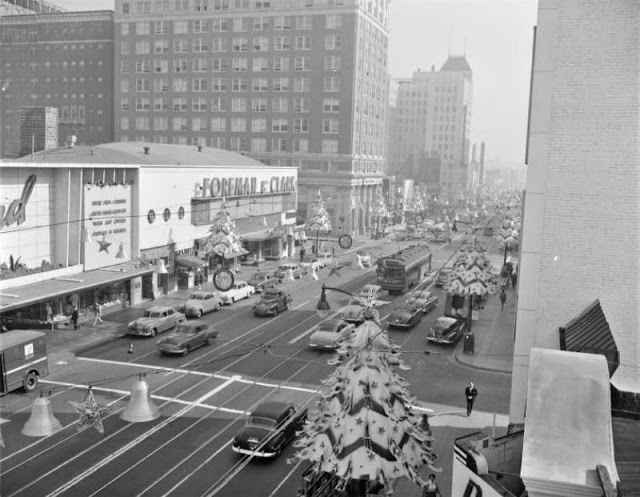 A Pacific Electric streetcar ambles down Hollywood Boulevard at Ivar Street in 1953, the last year streetcars would take part in Tinseltown’s Yuletide festivities. 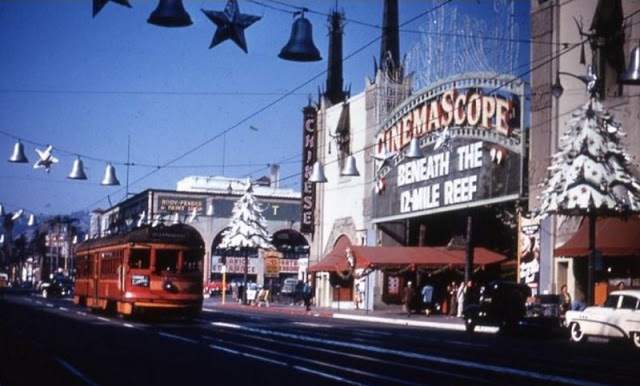 With an old LA Red Car trolley giving it a touch of holiday color, Grauman’s Chinese Theater on Hollywood Boulevard at Christmas time, 1953.

(via KCET.org)
Posted by Yesterday Today at 1:36 PM