“Excuse me I am Chinese, not Japanese!”


At the onset of the 20th century, the United States was not the most welcoming country to Chinese immigrants. From the Chinese Exclusion Act to blatant racism, Chinese Americans were unable to find jobs, had to establish Chinatowns where their families could live peacefully, and - of course - still had to always pledge their unwavering patriotism to the United States, lest they risk further social ridicule.

However, this all changed on December 7, 1941, when the Japanese launched their surprise attack on Pearl Harbor, killing 2,000 American soldiers and injuring 1,000 others, spurring the United States's involvement in World War II. Yet, for Chinese Americans, this suddenly meant that they were no longer viewed as the enemy. Rather, the US and Chinese immigrants now shared a common enemy: Japan. 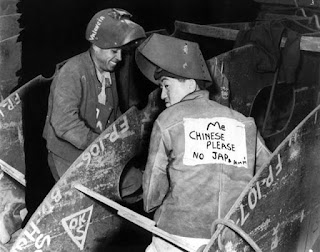 In order to further establish their loyalty to the United States - as well as to protect themselves from the brutal surge in racist violence and forced internment that Japanese Americans to which were suddenly being subjected - Chinese Americans began to wear signs, pins, and flags declaring their Chinese descent and even became active participants in the racist culture that had erupted in the US since the Japanese attack.

As soon as Chinese families began immigrating to the United States during the California Gold Rush in 1848, social tensions began to run high. Racism and discrimination against people of Chinese descent became the norm as they were viewed as intruders who came to the US to take jobs from other American citizens. They faced joblessness, exclusion, political and legal discrimination, and violence. 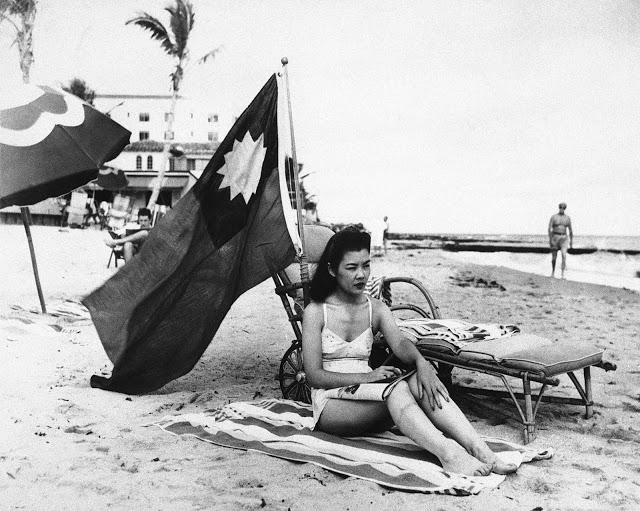 Ruth Lee, a hostess at a Chinese restaurant, flies a Chinese flag so she isn’t mistaken for Japanese when she sunbathes on her days off in Miami, in the wake of the attack on Pearl Harbor, Dec. 15, 1941. The flag shown here is the flag of Nationalist China which went into self-imposed exile to the island of Taiwan after the Communist revolution. This flag is now the flag of Taiwan.

So, once the Japanese began to draw the focus of US ridicule after the attack on Pearl Harbor, Chinese Americans finally had a chance to begin to pull themselves out from under the oppression of racism. With China becoming a new ally to the US war efforts in WWII (and with Japan being a common enemy), Chinese-American pride began to expand. In an effort to further deflect harassment, Chinese Americans began to wear signs and pins, and carry flags with them to clearly display their Chinese heritage and avoid being mistaken as Japanese.

As the US entered into WWII and tensions with Japan continued to rise, Chinese Americans and even Chinese newspapers "adopted the inflammatory anti-Japanese rhetoric and racial epithets used by the mainstream press." This led many Chinese Americans to become passive to the prosecution endured by their Japanese neighbors on US soil, and in many cases they even took over the jobs and shops that had been forcibly abandoned by the Japanese once the latter had been interned.

Just as the stage was being set in Europe for the rise of the Nazi Party and the eventual conflict that would become World War II, China was continuing on in its own battle with its neighbor, Japan. Conflicts between China and Japan go back for generations; however, at the beginning of the 1930s, these historic tensions began to take a turn for the worse as Japan sought to assert its control over Chinese territories. By 1937, the two countries were in at war with one another, with China launching a full-scale resistance against Japan, known as the Second Sino-Japanese War. 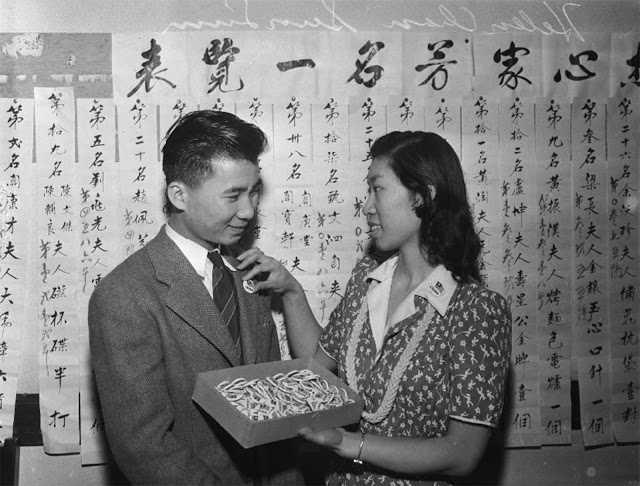 Helen Chan pins Sun Lum with lapel badge identifying him as “Chinese,” to avoid being rounded up with Japanese Americans who were being interned following Japan’s attack on Pearl Harbor. 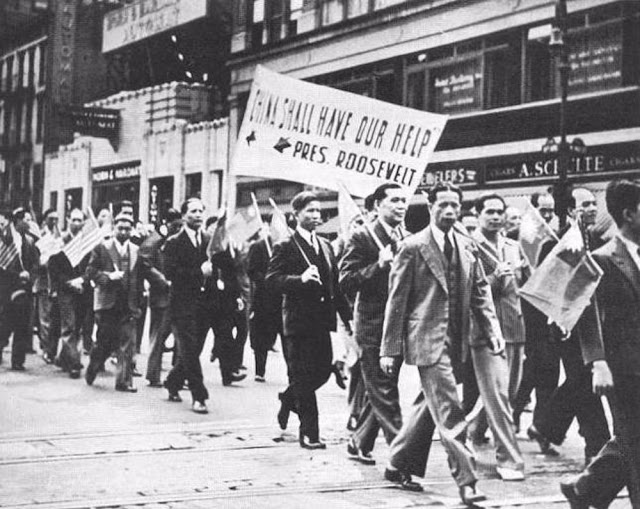 This resistance quickly fell into a lull as the Chinese struggled to regain their territories from Japanese control. Yet, when Japan set its sights on Pearl Harbor, they not only made an enemy of the United States, they also pushed the western superpower into a political alliance with China. This meant that the United States would begin providing aid to China to help defeat their now common enemy - and meant that Chinese sentiments in the US were, for the first time, on an huge upswing.