Boll released the following statement to Broadway World:
“It is with extreme heartache, that I have to announce the passing of an original Industry Pioneer, Legend and Icon - Miss Carol Channing. I admired her before I met her, and have loved her since the day she stepped ... or fell rather ... into my life. It is so very hard to see the final curtain lower on a woman who has been a daily part of my life for more than a third of it. We supported each other, cried with each other, argued with each other, but always ended up laughing with each other. Saying good-bye is one of the hardest things I have ever had to do, but I know that when I feel those uncontrollable urges to laugh at everything and/or nothing at all, it will be because she is with me, tickling my funny bone.”

Carol Channing began as a Broadway musical actress, starring in Gentlemen Prefer Blondes in 1949 and Hello, Dolly! in 1964, when she won the Tony Award for Best Actress in a Musical. She revived both roles several times throughout her career, most recently playing Dolly in 1995. Channing was nominated for her first Tony Award in 1956 for The Vamp followed by a nomination in 1961 for Show Girl. She received her fourth Tony Award nomination for the musical Lorelei in 1974.

As a film actress, she won the Golden Globe Award and was nominated for the Academy Award for Best Supporting Actress for her performance as Muzzy in Thoroughly Modern Millie (1967). Her other film appearances include The First Traveling Saleslady (1956) and Skidoo (1968). On television, she appeared as an entertainer on variety shows, from The Ed Sullivan Show in the 1950s to Hollywood Squares. She had a standout performance as The White Queen in the TV production of Alice in Wonderland (1985), and had the first of many TV specials in 1966, An Evening with Carol Channing.

Channing was inducted into the American Theatre Hall of Fame in 1981 and received a Lifetime Achievement Tony Award in 1995. She continued to perform and make appearances well into her 90s, singing songs from her repertoire and sharing stories with fans, cabaret style. She released an autobiography, Just Lucky I Guess, in 2002, and Larger Than Life, a documentary film about her career, was released in 2012.

Here, below is a gallery of 18 amazing vintage photos of Carol Channing from between the 1950s and 1980s: 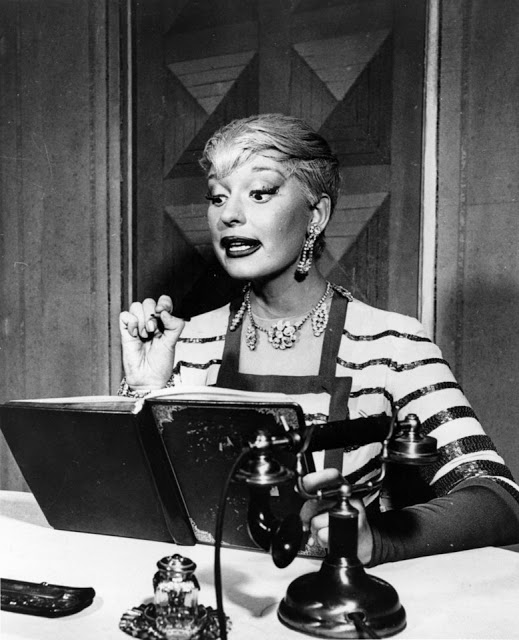 Carol Channing is shown in the role of Lorelei Lee in the original Broadway production of “Gentlemen Prefer Blondes” at the Ziegfeld Theatre in New York City in 1950. The musical comedy opened on Dec. 8, 1949. American singing star Carol Channing wears red and white striped gloves with her navy blue coat on arrival at London Airport, May 16, 1955. She will be on holiday here for two weeks, and then goes on to Paris and Istanbul. 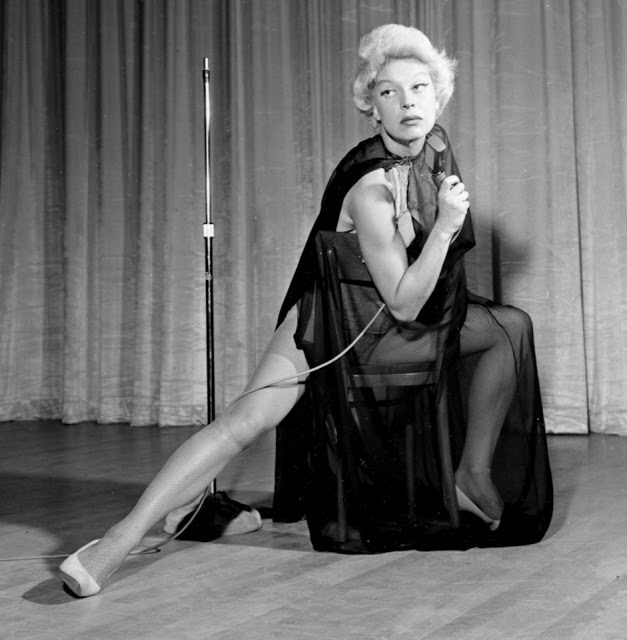 Actress and comedienne Carol Channing performs in her first nightclub opening appearance in Las Vegas, Nev., on July 9, 1957. Channing wears an $11.85 costume as she impersonates Marlene Dietrich, who recently appeared on a neighboring stage in a $20,000 gown. 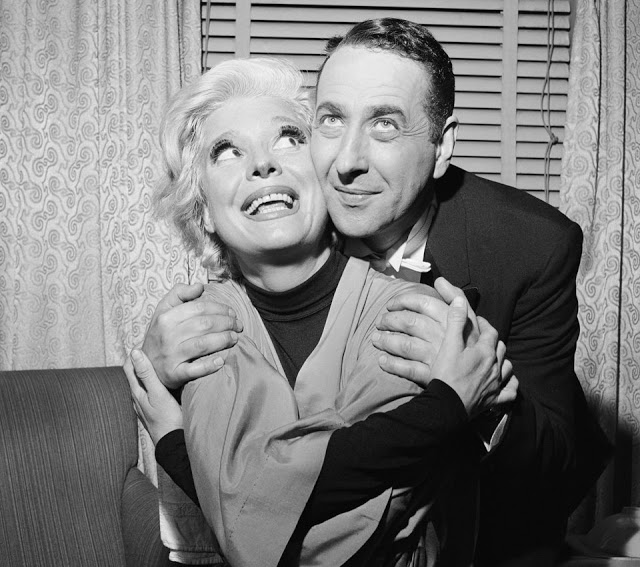 Carol Channing and Jules Munshin team up for photographer in dressing room pose backstage at the Eugene O’Neill Theatre after Broadway opening of “Show Girl” in New York, Jan. 12, 1961. Miss Channing stars in the musical revue. Munshin plays opposite her. 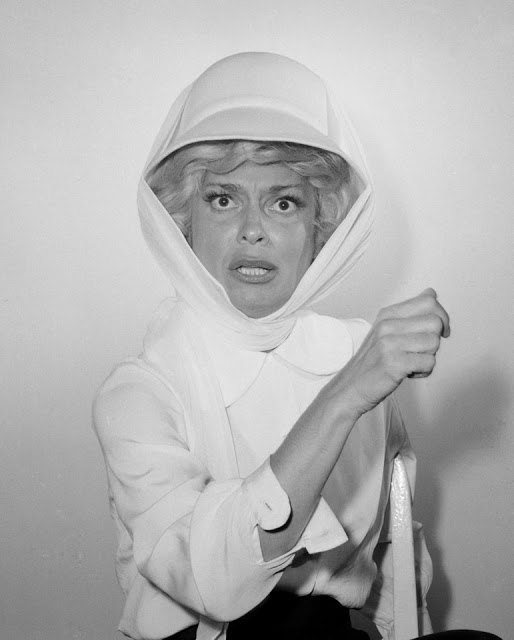 Fulfilling a longtime ambition, musical and nightclub star Carol Channing is about to appear in a big time production of a Bernard Shaw play. She’s rehearsing for “The Millionaires” June 26, 1963, which opens a seven-month tour on July 8 in Louisville, Kentucky. The title role will be Carol’s first dramatic stage part on Broadway when the play opens there after the tour. Carol is passing up profitable nightclub offers to carry out the dream she’s had since college days. 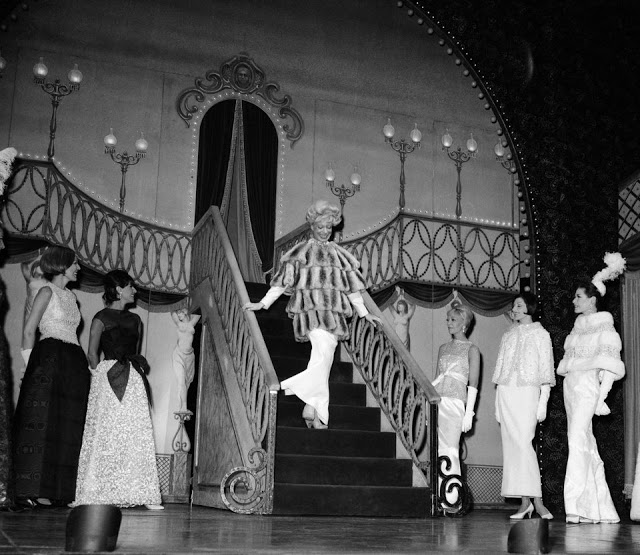 Carol Channing, star of the musical "Hello, Dolly!" wears a Luis Estevez fur as she descends a stairway during a scene from the show staged as part of a fashion presentation at the St. James Theater in New York, Wednesday, June 3, 1964. 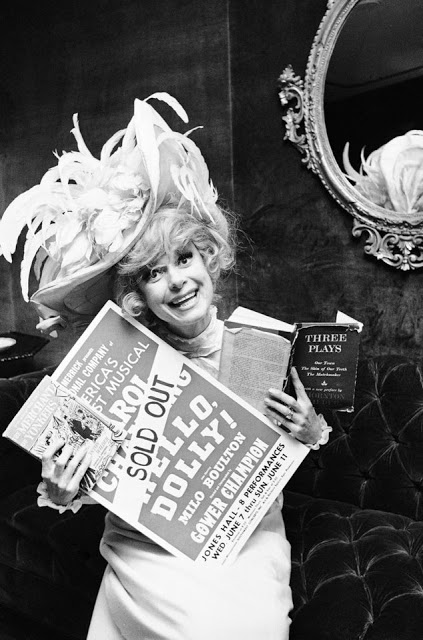 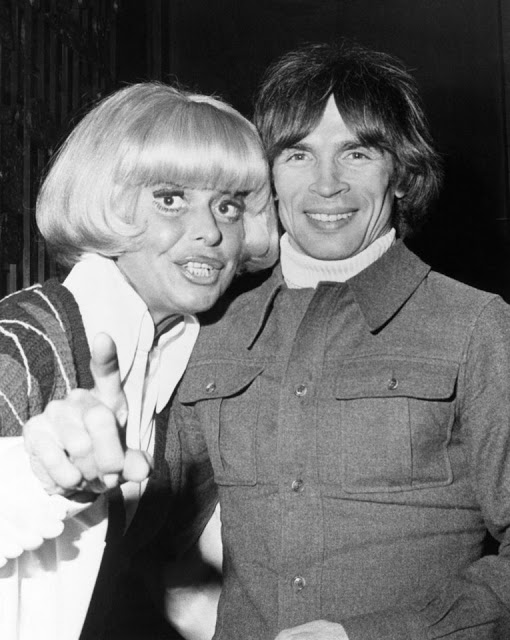 “Lorelei” star Carol Channing, hostess at a special screening of MGM’s “That’s Entertainment!” at the Ziegfeld Theater in New York chats with one of her guests, ballet superstar Rudolph Nureyev, May 1974. 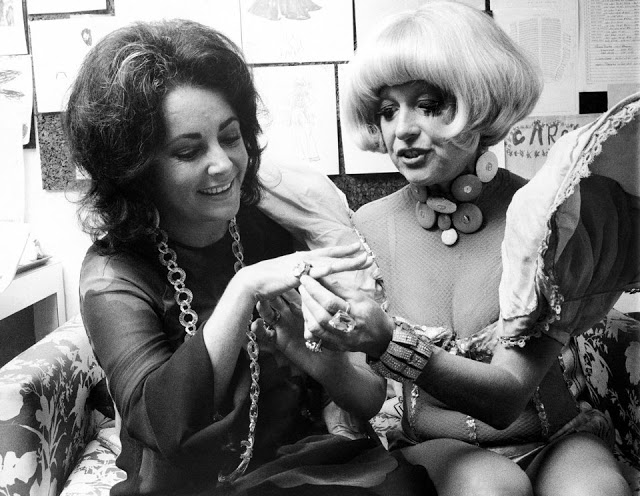 British actress Elizabeth Taylor, left, receives a ring that is part of Carol Channing’s costume in the title role of the Broadway musical “Lorelei.” Taylor and Channing met in the latter’s dressing room in New York, United States on Tuesday, August 13, 1974 for the exchange of the bauble. 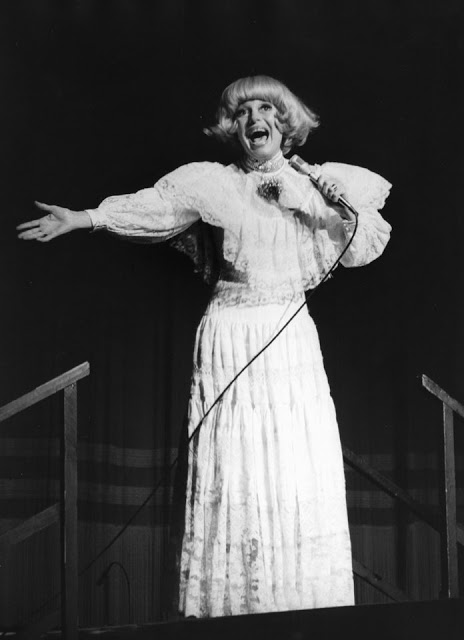 April 25, 1975: Actress Carol Channing greets the crowd downtown at the Civic Center Music Hall during the Channing Festival of Fashion, a benefit for the Festival of the Arts. 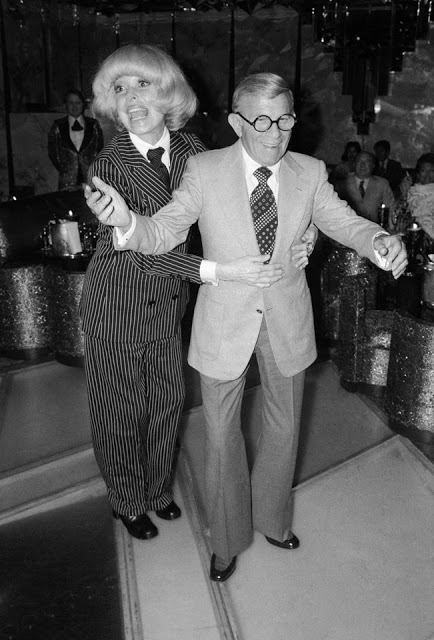 Carol Channing puts her arms around George Burns as she teaches her partner the “Hustle” at Regine’s disco in New York’s Delmonico Hotel, Aug. 16, 1976. They will open their two-person revue on Tuesday at the Westbury Music Fair in Westbury, New York. 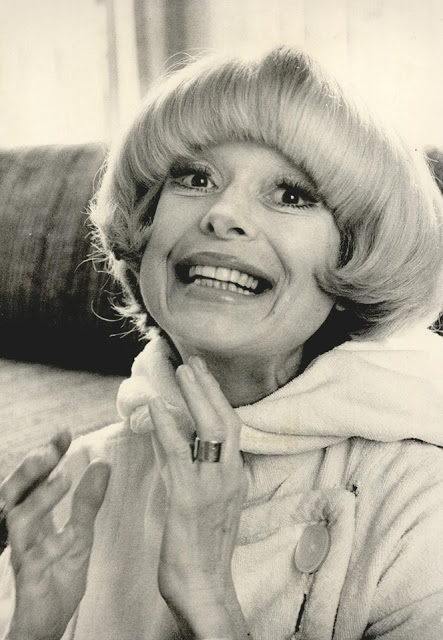 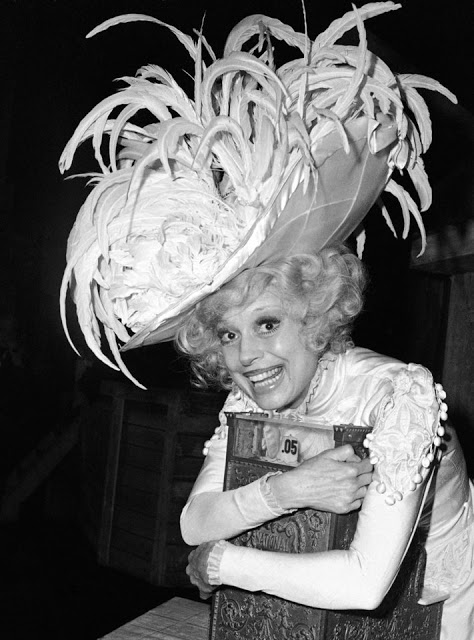 Carol Channing, star of the original “Hello, Dolly,” is back on Broadway again in a revival of the show. The musical had its first preview performance, March 2, 1978. 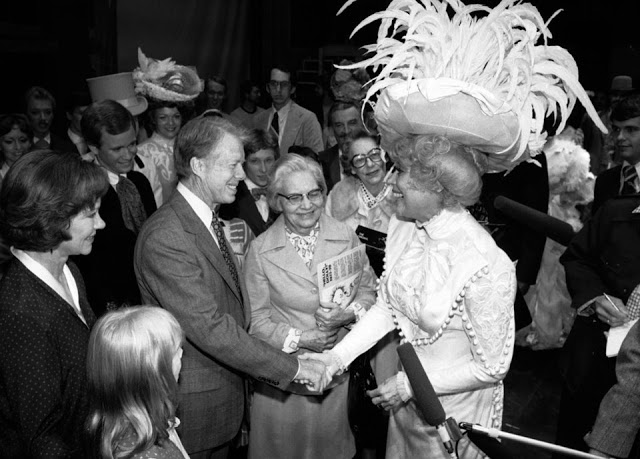 President Jimmy Carter shakes hands with Carol Channing after he and his family attended a performance of the musical “Hello Dolly” starring Miss Channing which is playing at the National Theater in Washington, Oct. 19, 1978. Also in the photo are, from left: first lady Rosalynn Carter, daughter Amy Carter, President Carter, Allie Smith, mother of Rosalynn Carter, and Miss Channing. 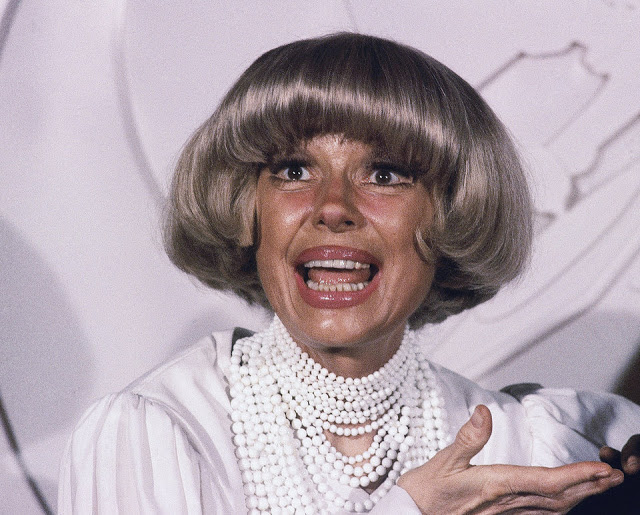 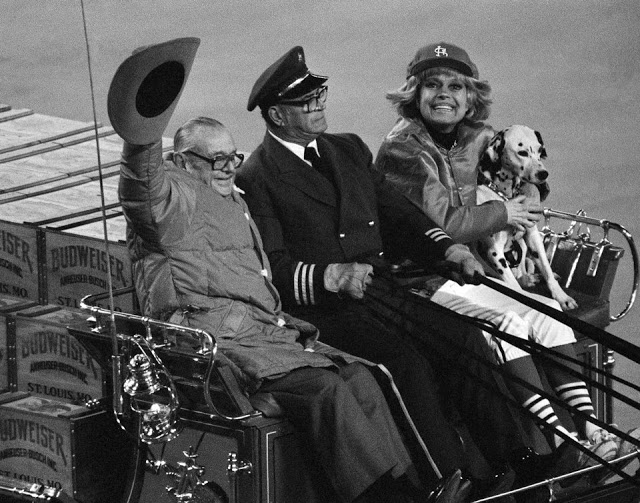 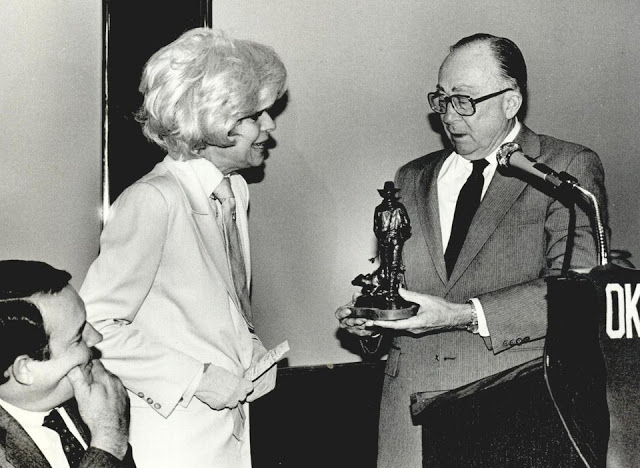 Oct. 25, 1984: Edward L. Gaylord, editor and publisher of The Oklahoman, presents an award to actress Carol Channing for being Oklahoma’s goodwill ambassador. 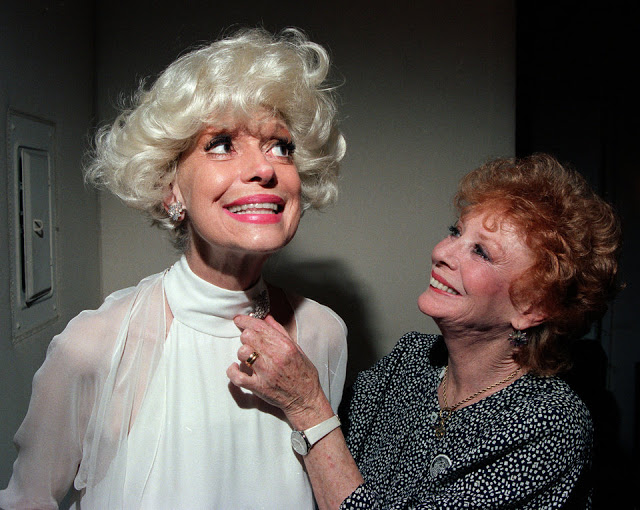 Actress Gwen Verdon, right, pins a diamond brooch on actress-singer Carol Channing for the 43rd Annual Tony Awards ceremony in New York City, June 4, 1989. Both Channing and Verdon, who are presenting awards, are loaned diamond jewelry from Tiffany’s for the awards show.