Dugouts were protective holes dug out of the sides of trenches. The size of dugouts varied a great deal and sometimes could house over ten men. A manual published by the British Army recommended dugouts that were between 2 ft. and 4 ft. 6 in. wide, roofed with corrugated iron or brushwood and then covered with a minimum of 9 inches of earth.

They were used as a form of underground shelter and rest for both troops and officers. Occupants of dugouts would eat their meals, arrange meetings and often make their bed there.

Dugouts were considered much safer than resting or lying in the open since they afforded some form of protection against not only the weather but, far more critically, from enemy shell-fire. However it was not unusual for direct shell hits to burrow through to dugouts, killing or maiming all occupants.

As the war went on dugouts grew in size. By 1917 dugouts at Messines could hold two battalions of soldiers at a time. Large dugouts were also built into the side of communication trenches so that they were not directly in line of fire from enemy guns. These often served as the battalion headquarters and provided sleeping accommodation for the officers. 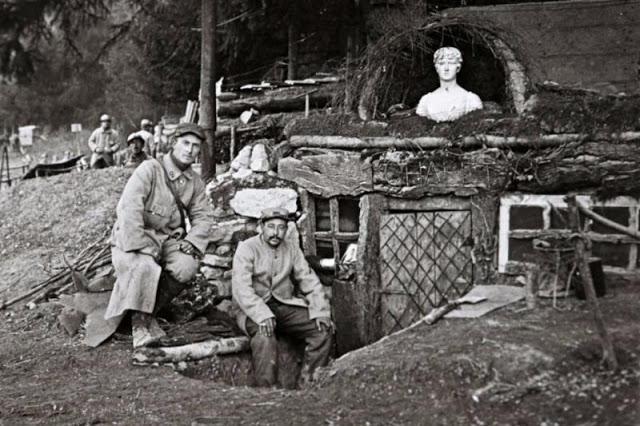 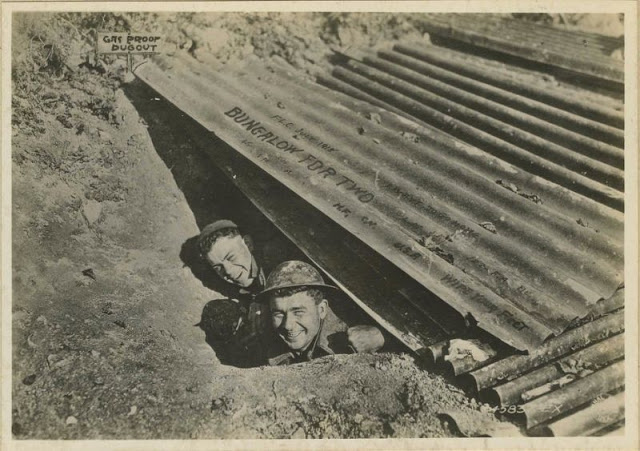 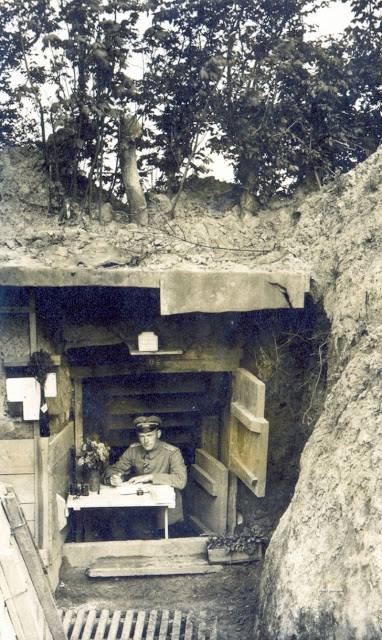 A Commander Rumpf, writing at a desk outside his WWI German-built dugout. © Drake Goodman. 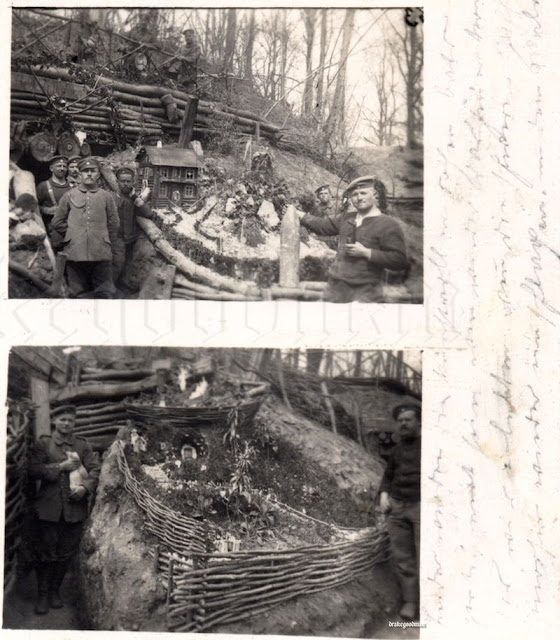 Soldiers built miniature dioramas of Lilliput and Blefuscu, the two fictional island nations from Gulliver’s Travels by Jonathan Swift, in the front yard of their dugouts. © Drake Goodman. 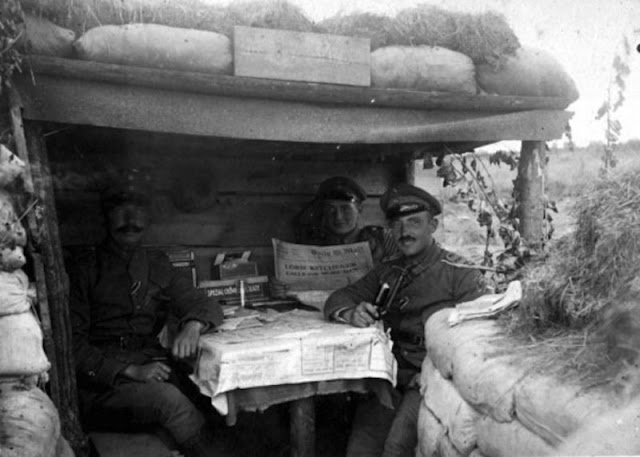 German troops reading The Daily Mail in a dugout at Wieltje, East of Ypres, 1915. © Drake Goodman. 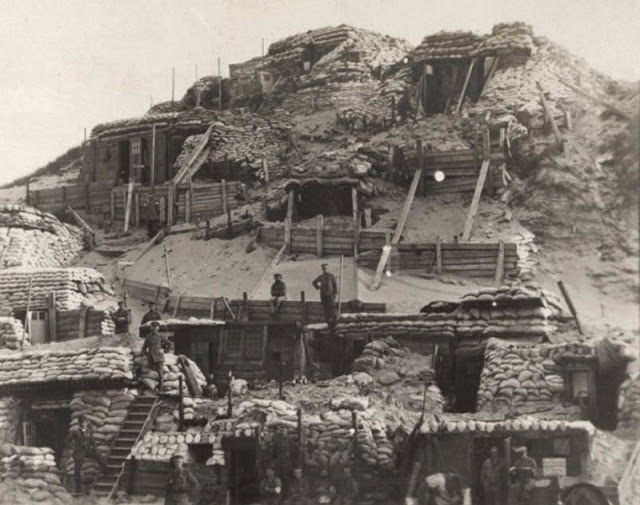 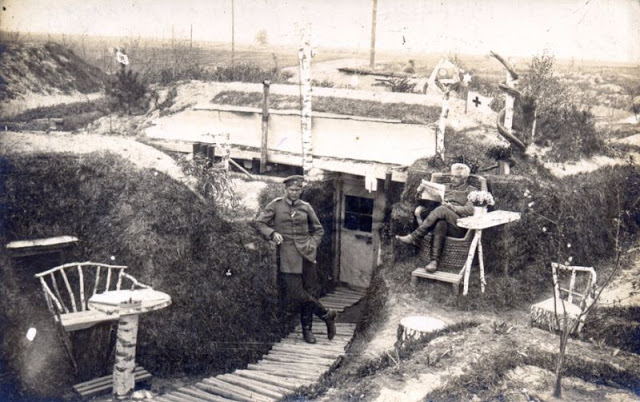 What war? All the comforts of home in a medical officer’s dugout. The elaborate “garden” is extraordinary, particularly the decorative snake and wicker sun chair. Location unknown, Maschinengewehr-Kompanie 1917. © Drake Goodman. 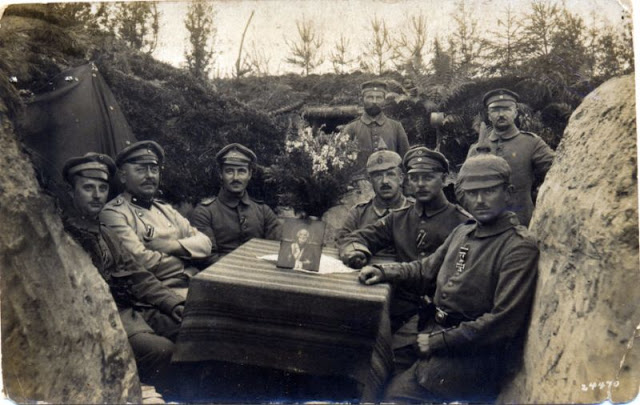 Landwehr Regiment Officers and NCOs seated around a table on which sits a portrait of a Saint Nicholas and a vase of flowers. Possibly a special occasion such as an award presentation, 1915. © Drake Goodman. 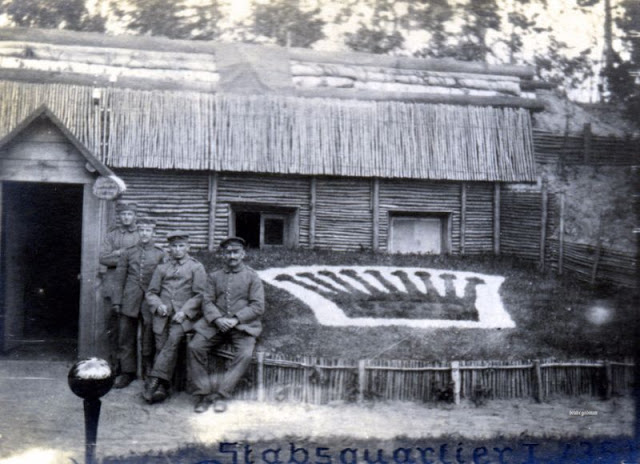 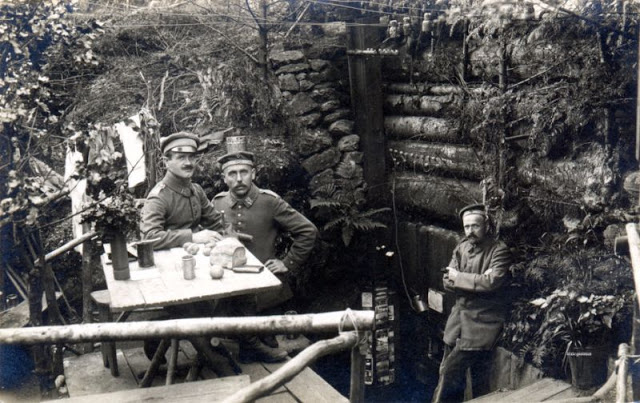 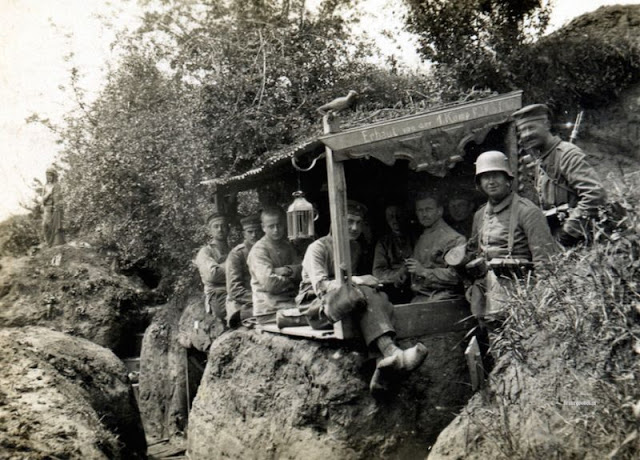 Men of Reserve Infanterie Regiment 31 mooch about in a small annex adjoining their dugout. Their digs have been spruced up with some items no doubt liberated from a ruined church or farmhouse. A stuffed pheasant sits on one corner of the shelter, decorated with piece of ornately carved timber, perhaps once part of the altar of a church. In the background we see a statue of the Madonna, from a graveyard? The author of the letter, Friedrich Sommer mentions a “big offensive”. He is referring to the Battle of the Somme. German-built by the 1st Company of Reserve Infantry Regiment 31. © Drake Goodman. 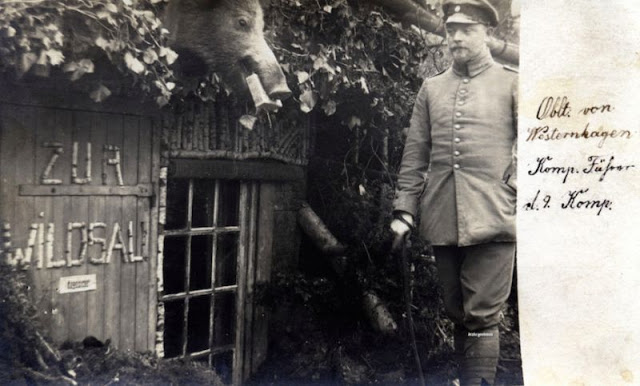 The company commander’s bullet-proof (“kugelsicher”) bunker or hut is called “Zur Wildsau” (the name of a pub “The Boar’s Head”) to match the stuffed wild boar’s or sow’s head above the entrance. Not sure what is stuck in the animal’s mouth. © Drake Goodman. 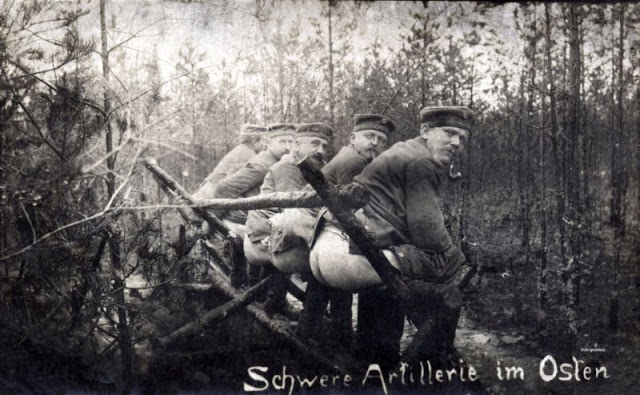 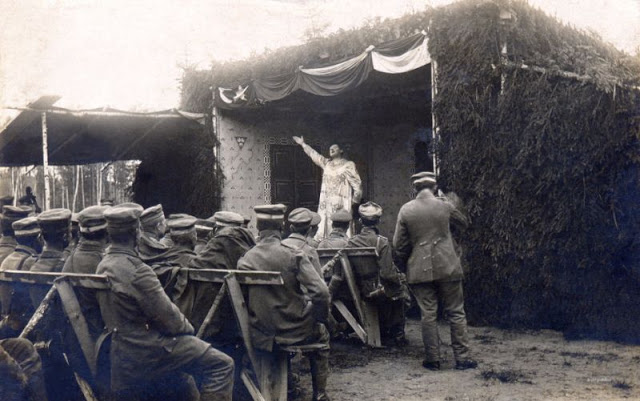 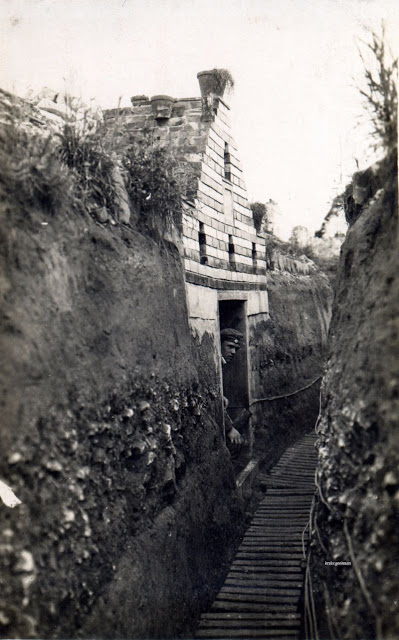 What looks like a German communication trench with phone wires running into the house. © Drake Goodman. 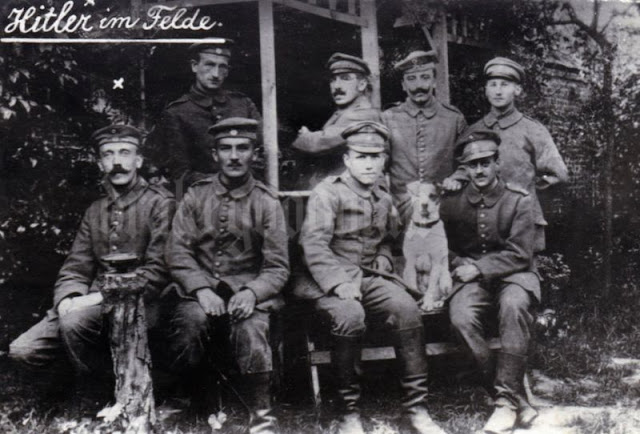 Here's a rare photograph of Adolf Hitler and his colleagues from Bayer of the Reserve-Infanterie-Regiment Nr. 16 in a pleasant garden setting during WWI. He is wearing the Iron Cross Second Class which he was awarded in 1914 and would later go on to receive the Iron Cross First Class in 1918, after being recommended by a German-Jewish Leutnant, Hugo Gutmann. © Drake Goodman. 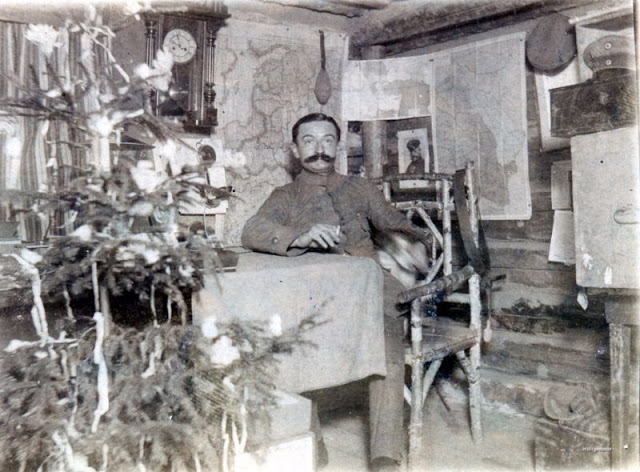 The interior of an officer’s digs at Christmas time. No doubt well appointed by comparison with the lodgings of the men under his command. © Drake Goodman. 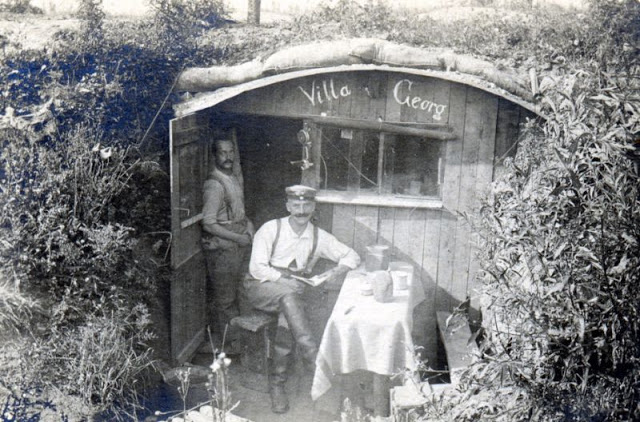 A Field Artillery Regiment communications bunker dubbed “Villa Georg” by it’s occupants. A field telephone can be seen close to hand as an artilleryman enjoys the sun with a good book and some bread. © Drake Goodman. 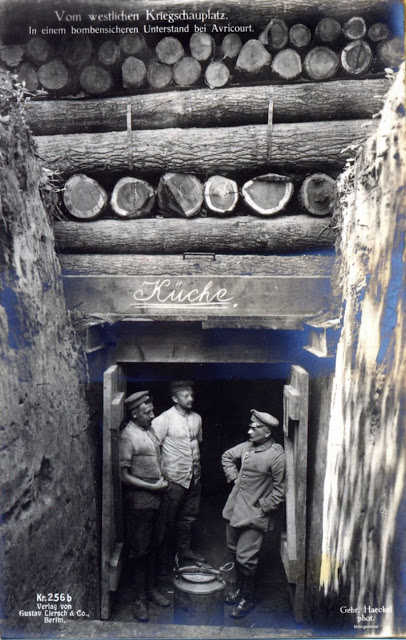 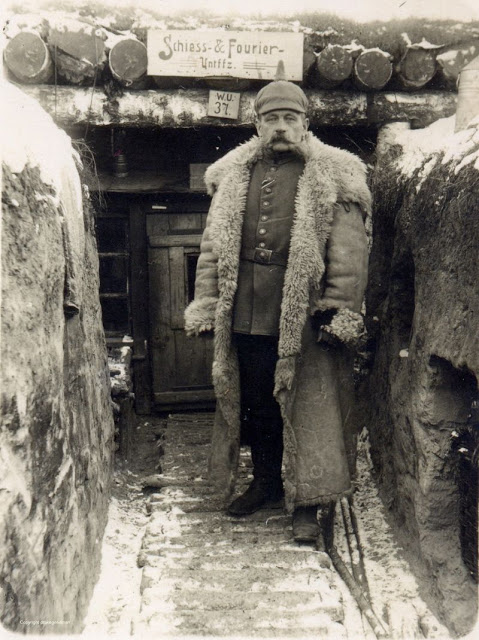 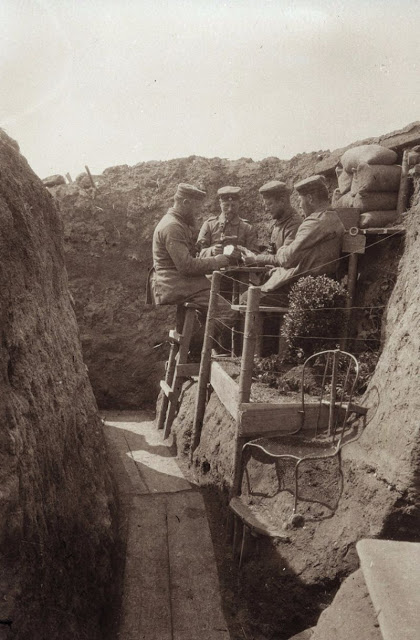 This photograph of German soldiers playing cards next to a garden built in the trenches comes from a collection of over a unseen thousand photos taken from 1914-1918 by Lt. Walter Koessler. 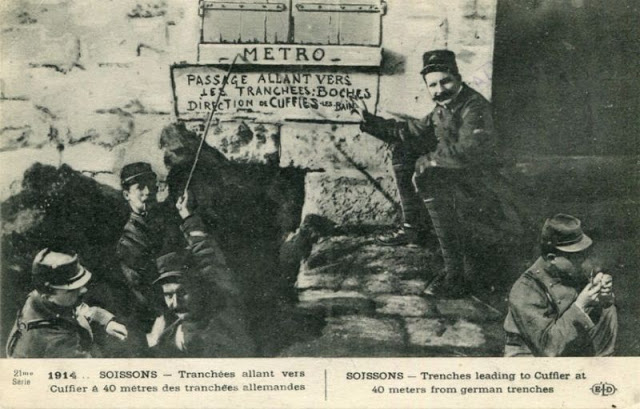 Soldiers bring the amenities of the Parisian metro to war, 40 meters from the German trenches. 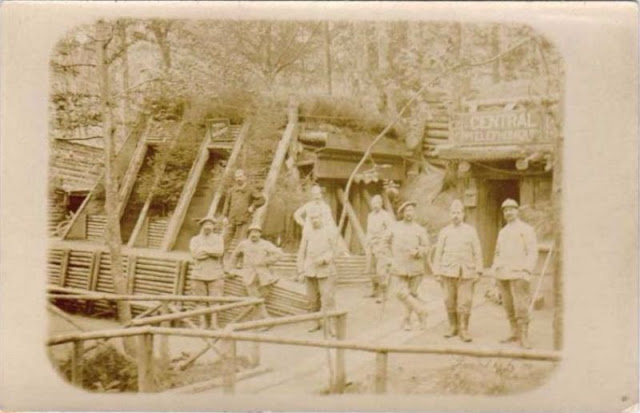 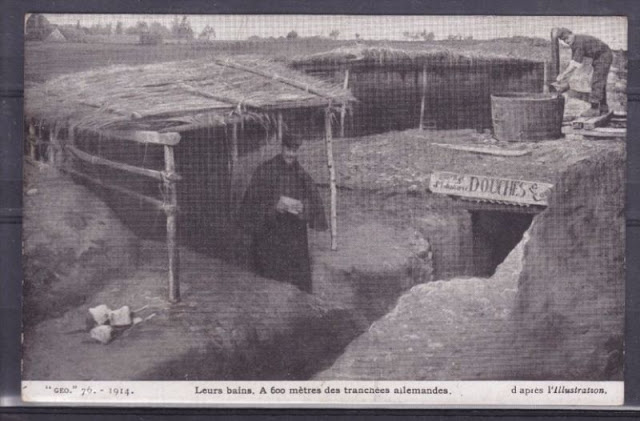 Showertime in the French trenches, 1914, 600 meters from German lines. 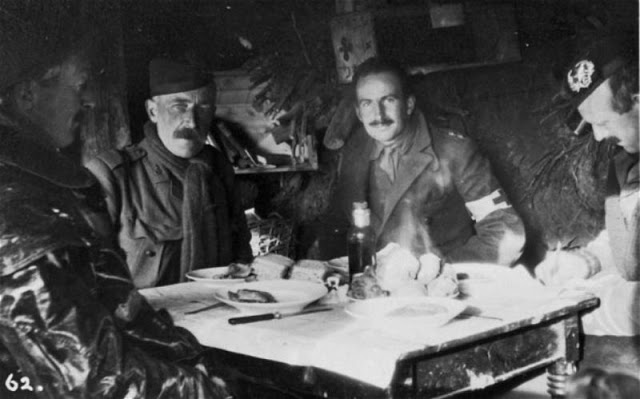 A young doctor who smuggled his camera onto the frontline. Fred Dickinson is pictured right with the 1st Cameronians, part of the British Expeditionary Force inside a dugout in France. According to his grandson who shared the story with the Telegraph, the snap was taken at a time when it was expressly forbidden, under Army orders, to use a camera while serving at the front. 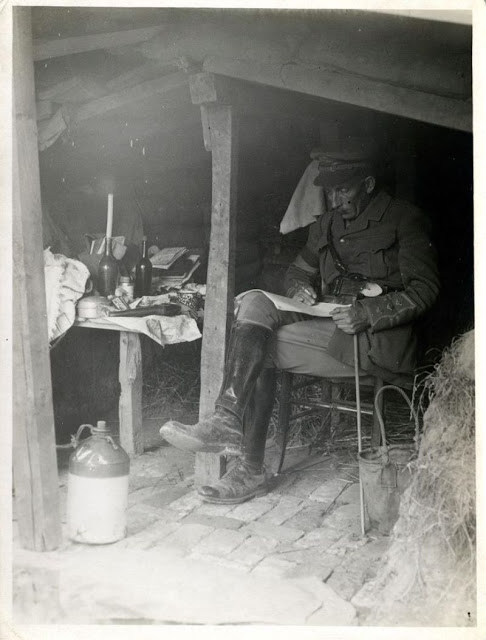 A British officer is pictured in his hut dug into the side of a trench, 1915.