Formerly known as Longacre Square, Times Square was renamed in 1904 after The New York Times moved its headquarters to the newly erected Times Building – now One Times Square – the site of the annual New Year's Eve ball drop which began on December 31, 1907, and continues today, attracting over a million visitors to Times Square every year.

The general atmosphere of Times Square changed with the onset of the Great Depression in the early 1930s. City residents moved uptown to cheaper neighborhoods, and many popular theaters closed, replaced by saloons, brothels, "burlesque halls, vaudeville stages, and dime houses." The area acquired a reputation as a dangerous and seedy neighborhood in the following decades.

Nevertheless, Times Square continued to be the site of the annual ball drop on New Year's Eve. The ball drop was placed on hiatus for New Year's Eve in 1942 and 1943 due to lighting restrictions during World War II. Instead, a moment of silence was observed at midnight in Times Square, accompanied by the sound of chimes played from sound trucks.

On May 8, 1945, a massive crowd celebrated Victory in Europe Day in Times Square; and on August 15, 1945, the largest crowd in the history of Times Square gathered to celebrate Victory over Japan Day. The victory itself was announced by a headline on the "zipper" news ticker at One Times Square, which read "*** OFFICIAL TRUMAN ANNOUNCES JAPANESE SURRENDER ***", the six asterisks representing the branches of the U.S. Armed Forces.

Brightly adorned with billboards and advertisements, Times Square is sometimes referred to as "The Crossroads of the World", "The Center of the Universe", "the heart of The Great White Way", and the "heart of the world". 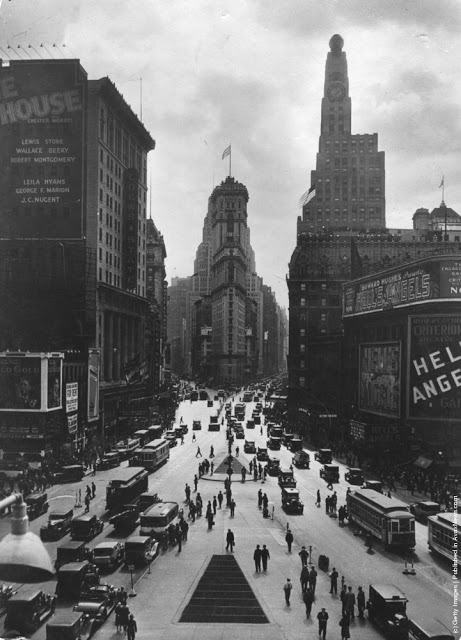 Looking towards the Times Building on Times Square, the Paramount Building is on the right, and Seventh Avenue on the left crossing Broadway, 1930. 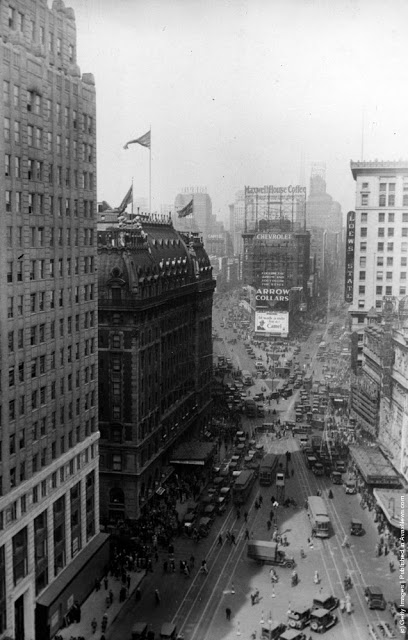 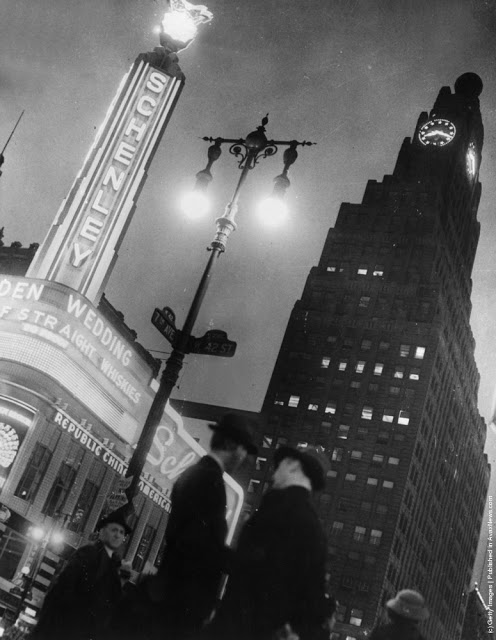 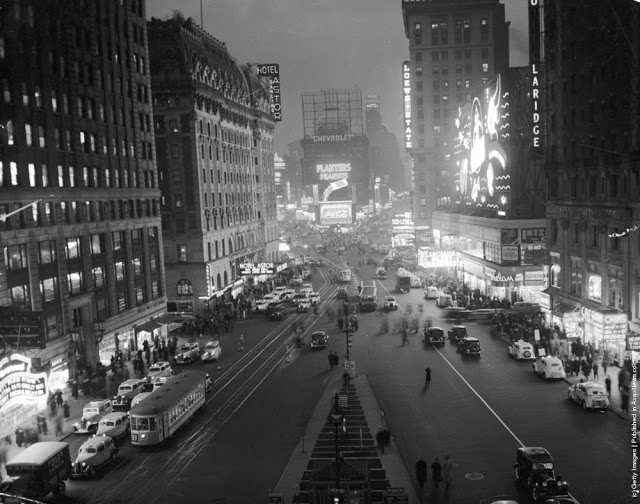 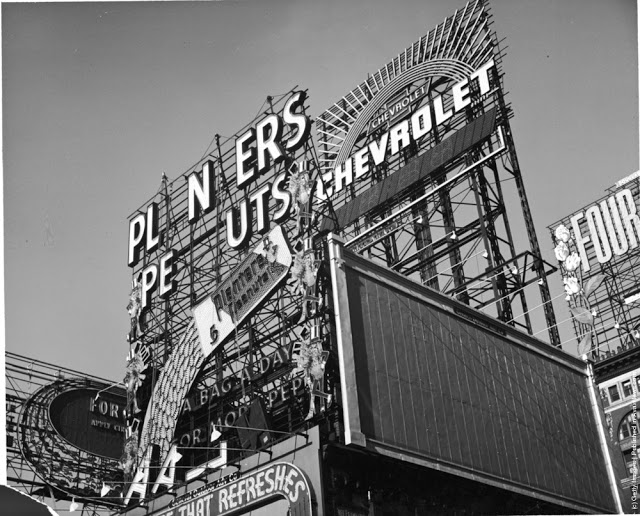 A view of the Planters Peanuts illuminated sign at the intersection of Broadway and 7th Avenue, Times Square, New York City, New York, 1940. 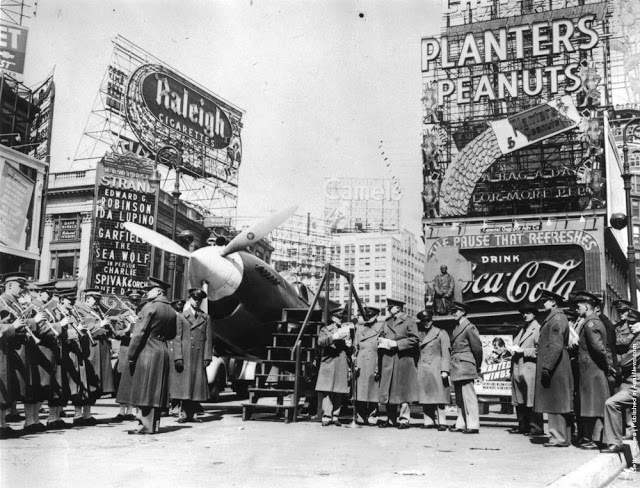 A military band and a Curtiss P-40 Army Pursuit plane in Duffy Square on the corner of Times Square in New York. The plane is part of an exhibition to encourage men to join the Army Air Corps. 10th April 1941. 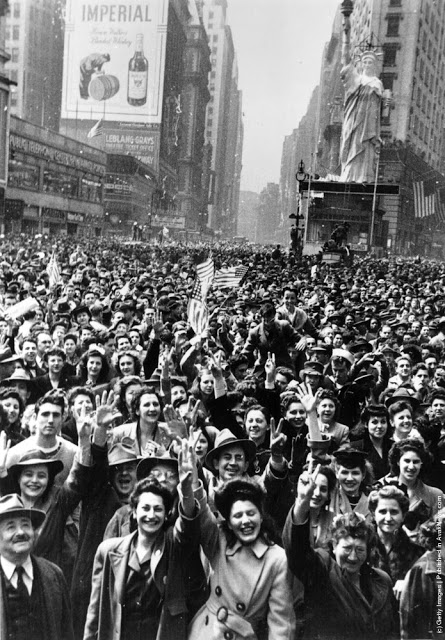 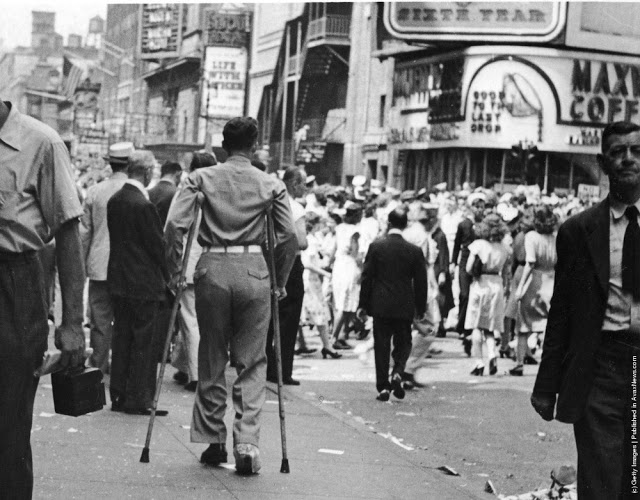 A rear veiw of a soldier on crutches in a crowd in Times Square on VJ Day, New York City, August 1945. 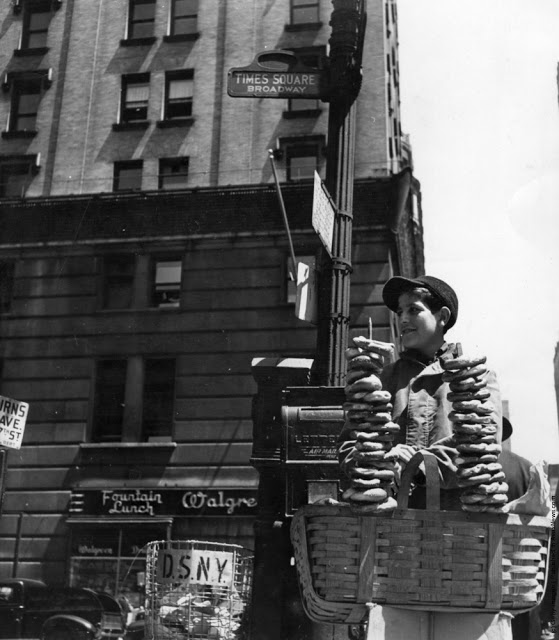 A pretzel vendor selling his wares from a wicker basket in the Times Square and Broadway area of New York, 1947. 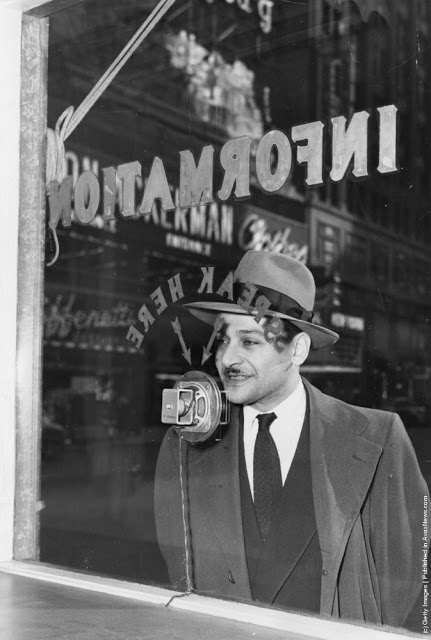 An information seeker speaks into a microphone at a police information booth at Times Square, New York. 14th March 1949. 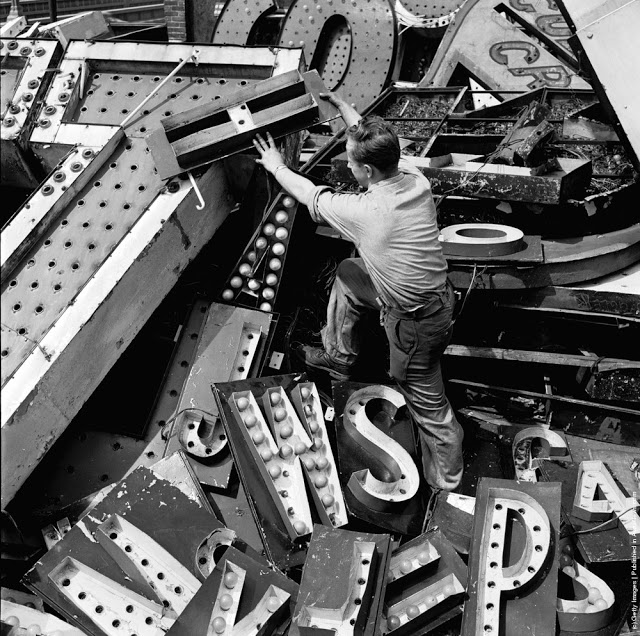 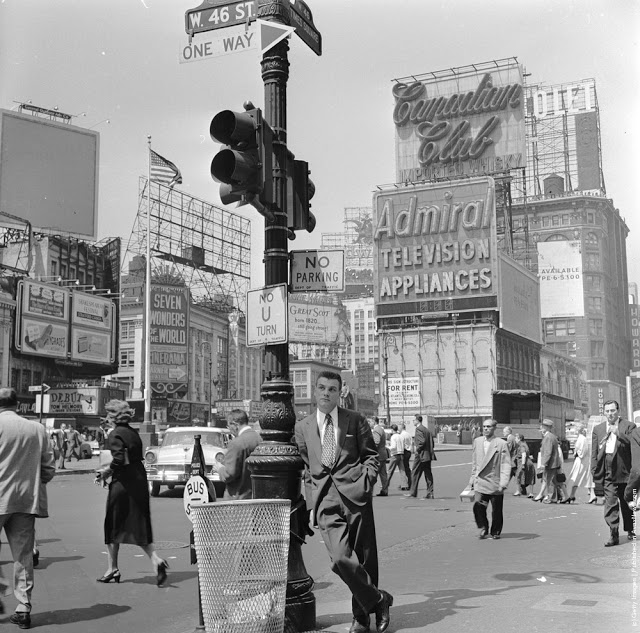 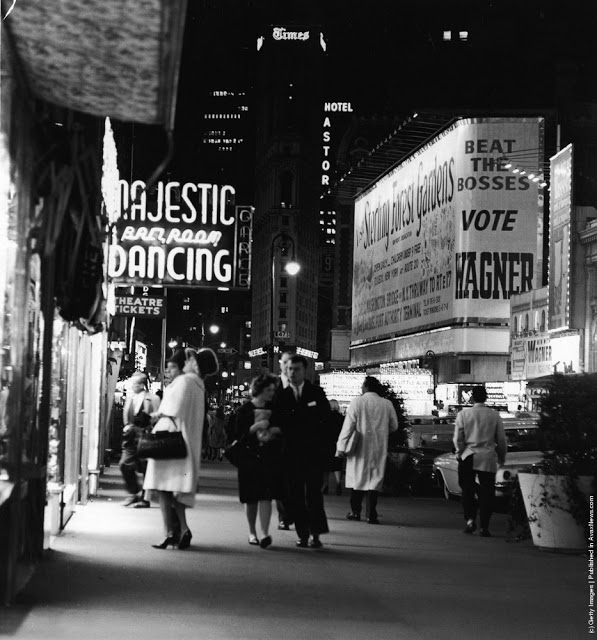 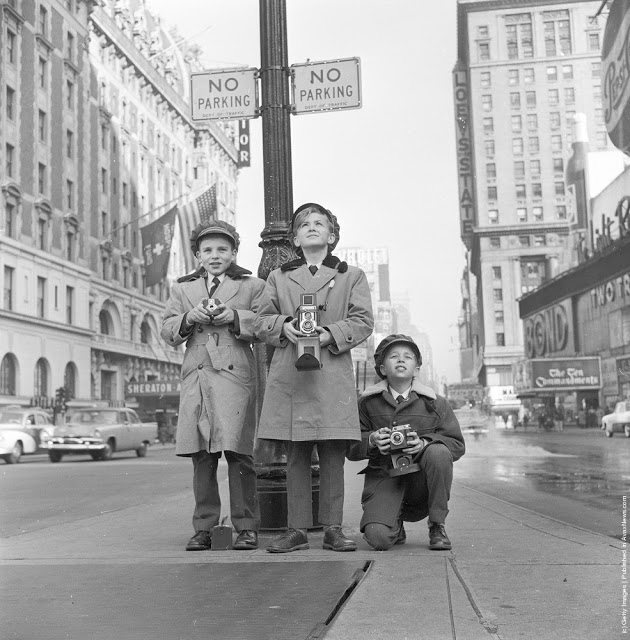 Choristers from a Norwegian choir on a visit to New York take photographs in Times Square, 1956. 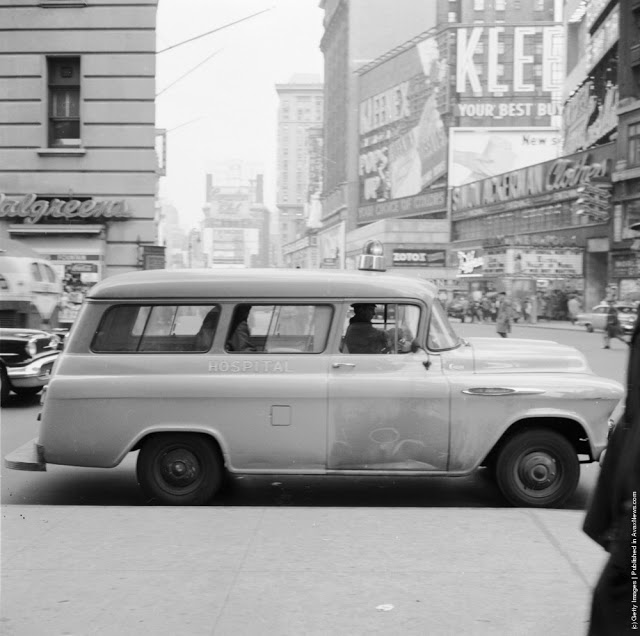 A Beth David Hospital ambulance on call in Times Square, 1956. 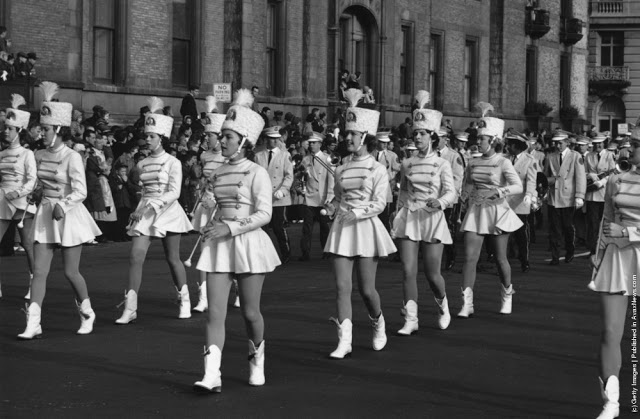 A group of majorettes parading in the Thanksgiving Parade near Times Square, New York. 26th November 1961. 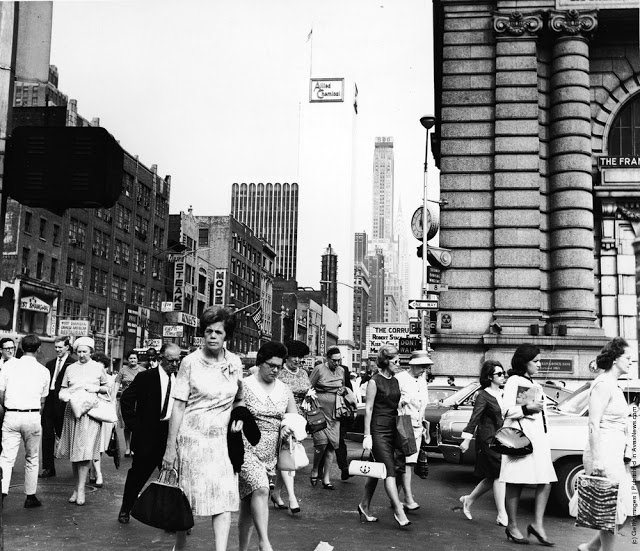 Crowds of pedestrians walk at the intersection of Eighth Avenue and 42nd Street, with the Allied Chemical building visible in the background, New York City, 1962. 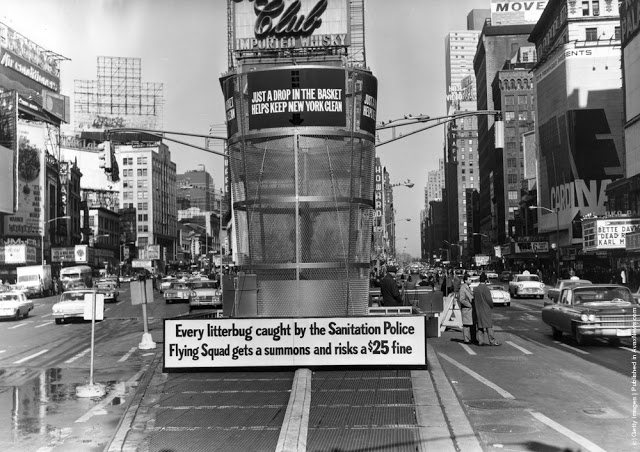 A gigantic litter basket in Times Square, New York with a sign saying, [Just a Drop in the basket keeps New York Clean]. Another signe threatens a 25 fine for any litterbug caught by the Sanitation Police Flying sqaud. 18th March 1964. 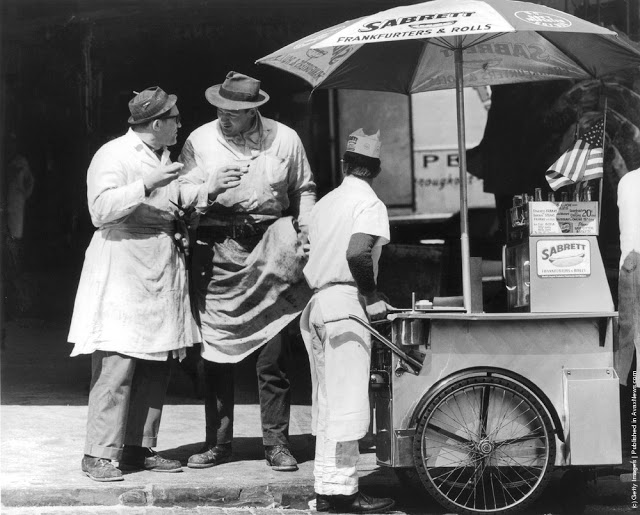 Two butchers stop to chat after buying hot dogs from a street vendor in the Times Square area of New York, 1965. 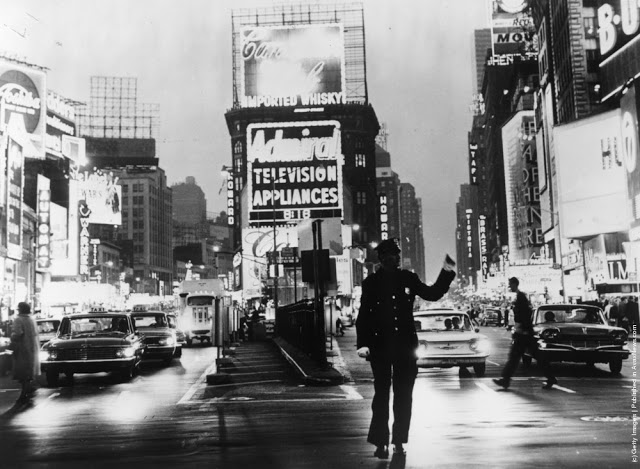 A policeman directs traffic in front of the famous neon billboards of Times Square in New York City, at its intersection with Broadway, 1965 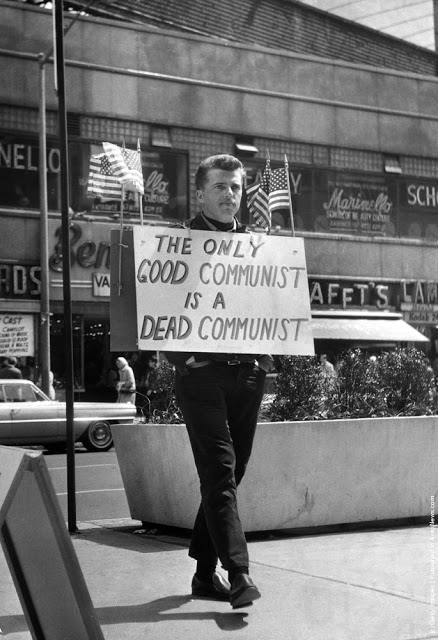 New York nightclub owner Jack L Hickman spends his free time marching around Times Square with a sign that reads [The only good communist is a dead communist]. 26th April 1965. 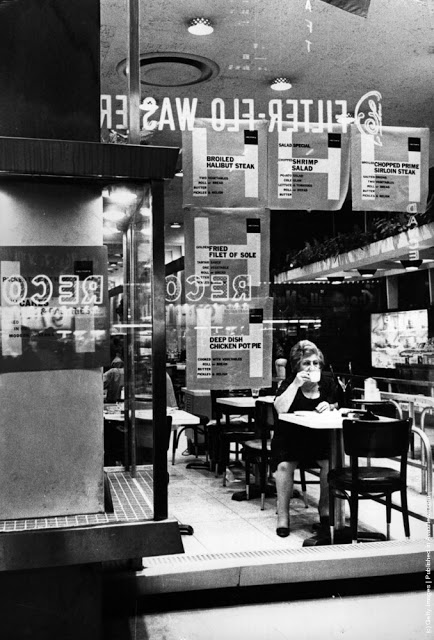 A woman sitting in a Times Square cafeteria, New York, 1968. 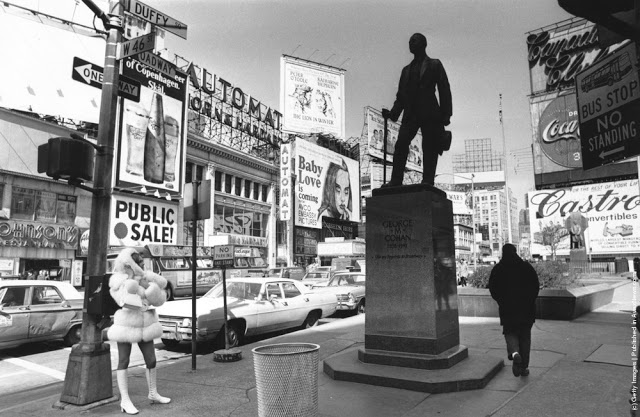 Times Square, New York with the statue of theatrical impresario, George Cohan being studied by a fur coated, mini-skirted passer-by, 1969. 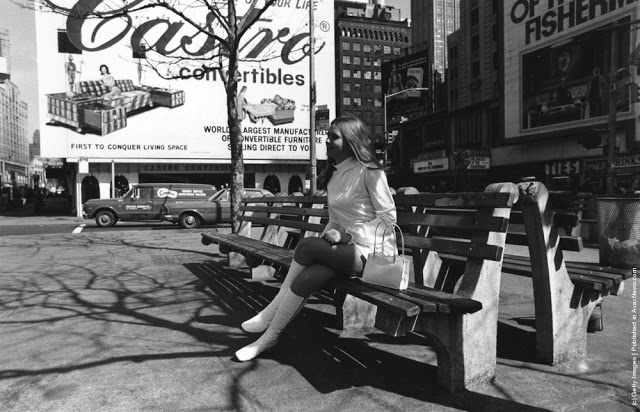 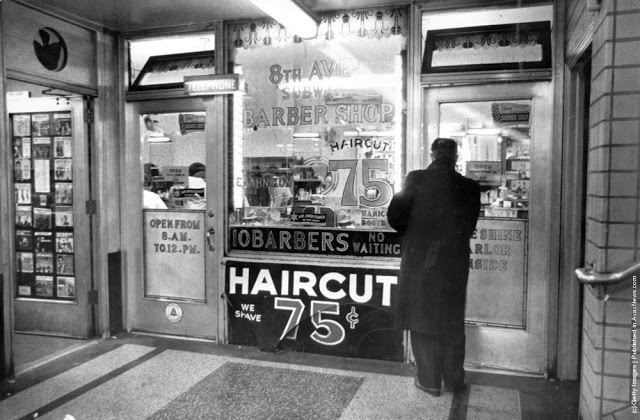 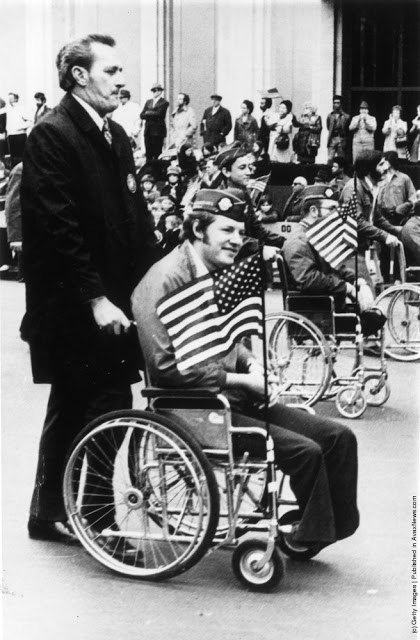 Two amputees take part in a parade through Times Square in New York City, to commemorate the end of the Vietnam War and honour those who took part in it. 6th April 1973. 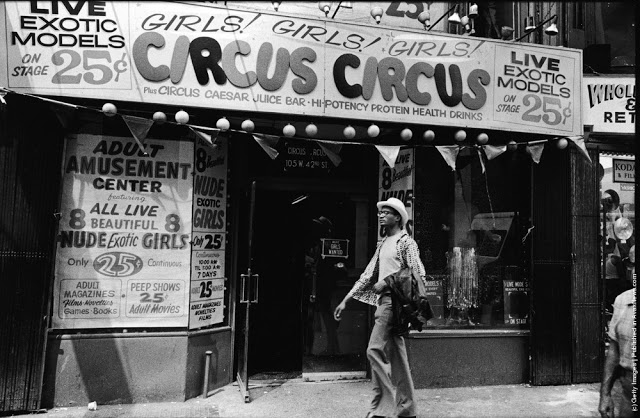 Exterior view of Circus Circus, an [adult amusement center], in Times Square as a man walks past wearing a hat and carrying his coat over his arm, New York, New York, 1975. The marquee advertises exotic models, nude girls, books, magazines, games, and peep shows, as well as a juice bar and [high-potency protein health drinks]. 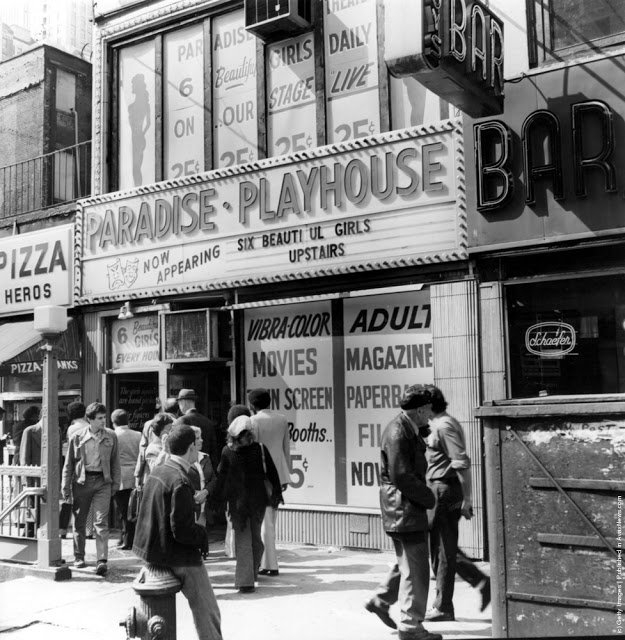 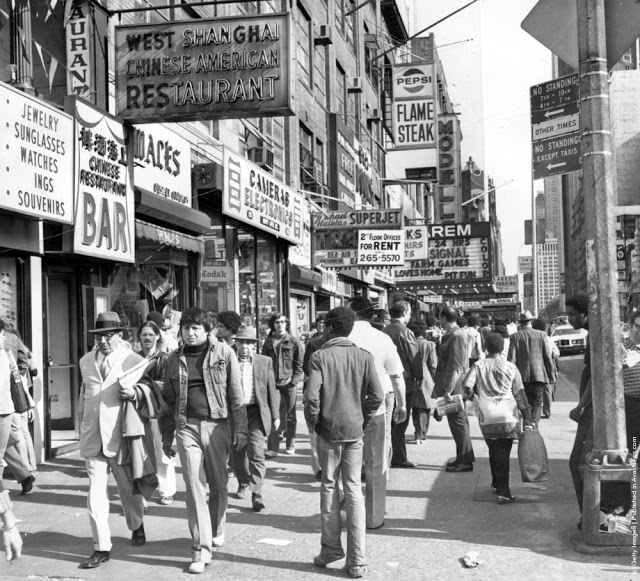 Shoppers on West 42nd Street between 7th and 8th Avenues in the Times Square area of New York. 12th October 1975. 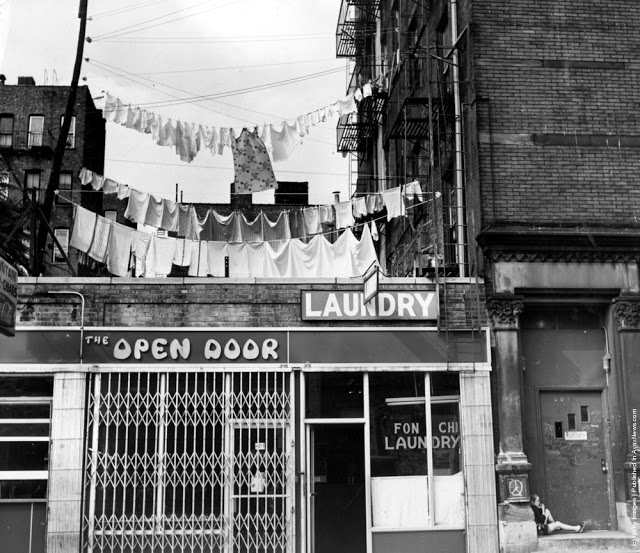 Clean washing hanging out to dry above a laundry one block west of the more glamorous Times Square, New York, 1977.