In 1901, 20-year-old William S. Harley drew up plans for a small engine with a displacement of 7.07 cubic inches (116 cc) and four-inch (102 mm) flywheels. The engine was designed for use in a regular pedal-bicycle frame. Over the next two years, Harley and his childhood friend Arthur Davidson worked on their motor-bicycle using the northside Milwaukee machine shop at the home of their friend, Henry Melk. It was finished in 1903 with the help of Arthur’s brother, Walter Davidson. Upon testing their power-cycle, Harley, and the Davidson brothers found it unable to climb the hills around Milwaukee without pedal assistance. They quickly wrote off their first motor-bicycle as a valuable learning experiment.

Work immediately began on a new and improved second-generation machine. This first “real” Harley-Davidson motorcycle had a bigger engine of 24.74 cubic inches (405 cc) with 9.75 inches (25 cm) flywheels weighing 28 lb (13 kg). The machine’s advanced loop-frame pattern was similar to the 1903 Milwaukee Merkel motorcycle (designed by Joseph Merkel, later of Flying Merkel fame). The bigger engine and loop-frame design took it out of the motorized bicycle category and marked the path to future motorcycle designs. The boys also received help with their bigger engine from outboard motor pioneer Ole Evinrude, who was then building gas engines of his own design for automotive use on Milwaukee’s Lake Street.

The prototype of the new loop-frame Harley-Davidson was assembled in a 10 ft × 15 ft (3.0 m × 4.6 m) shed in the Davidson family backyard. Most of the major parts, however, were made elsewhere, including some probably fabricated at the West Milwaukee railshops where oldest brother William A. Davidson was then toolroom foreman. This prototype machine was functional by September 8, 1904, when it competed in a Milwaukee motorcycle race held at State Fair Park. It was ridden by Edward Hildebrand and placed fourth. This is the first documented appearance of a Harley-Davidson motorcycle in the historical record.

In January 1905, small advertisements were placed in the Automobile and Cycle Trade Journal offering bare Harley-Davidson engines to the do-it-yourself trade. By April, complete motorcycles were in production on a very limited basis. That year, the first Harley-Davidson dealer, Carl H. Lang of Chicago, sold three bikes from the five built in the Davidson backyard shed. Years later the original shed was taken to the Juneau Avenue factory where it would stand for many decades as a tribute to the Motor Company’s humble origins until it was accidentally destroyed by contractors cleaning the factory yard in the early 1970s.

In 1906, Harley and the Davidson brothers built their first factory on Chestnut Street (later Juneau Avenue), at the current location of Harley-Davidson’s corporate headquarters. The first Juneau Avenue plant was a 40 ft × 60 ft (12 m × 18 m) single-story wooden structure. The company produced about 50 motorcycles that year.

Here are some rare photographs from inside the Harley motorcycle factory from the 1910s and 1920s. 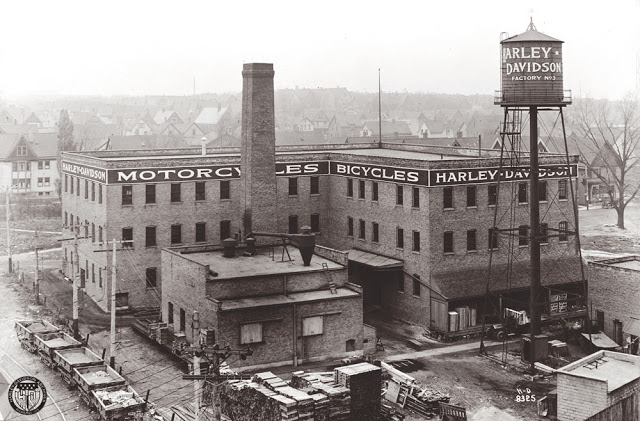 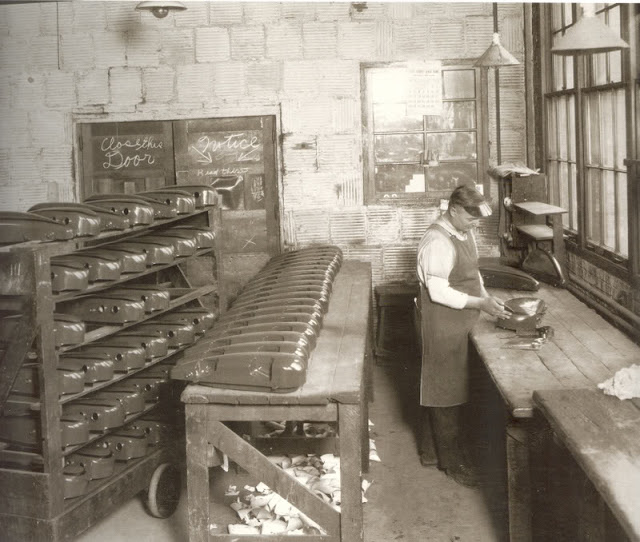 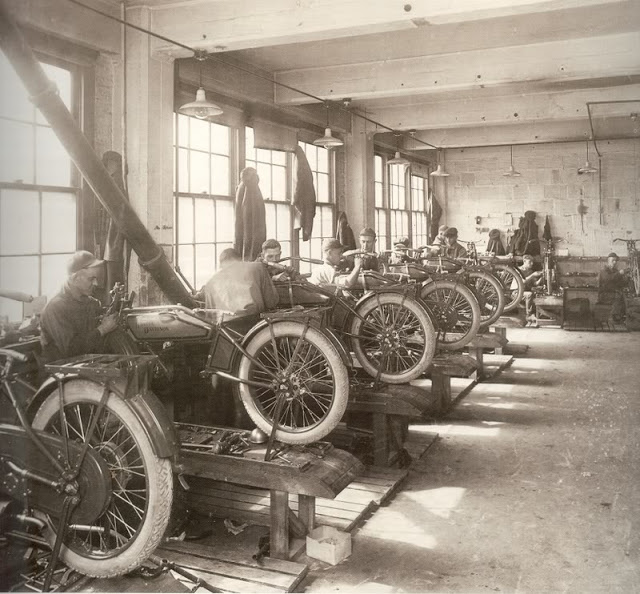 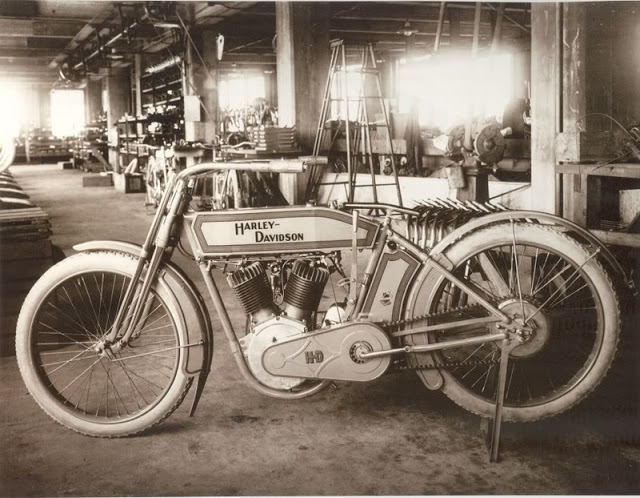 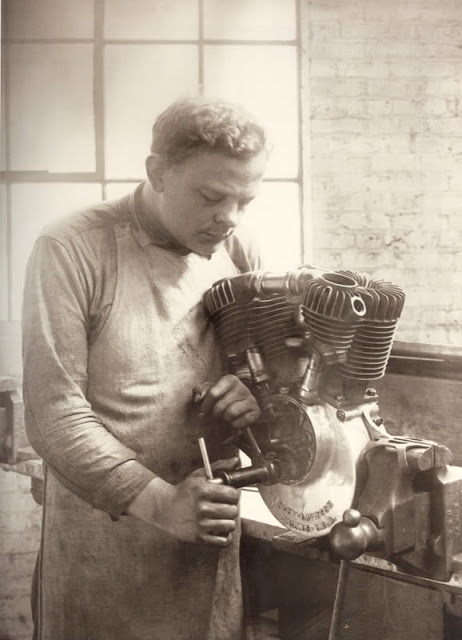 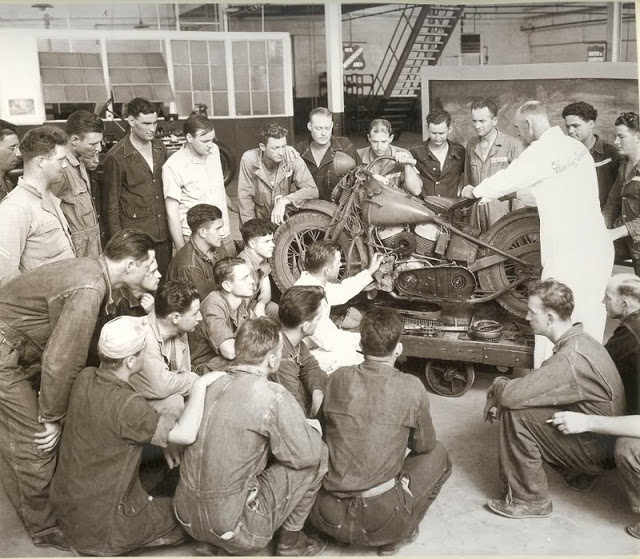 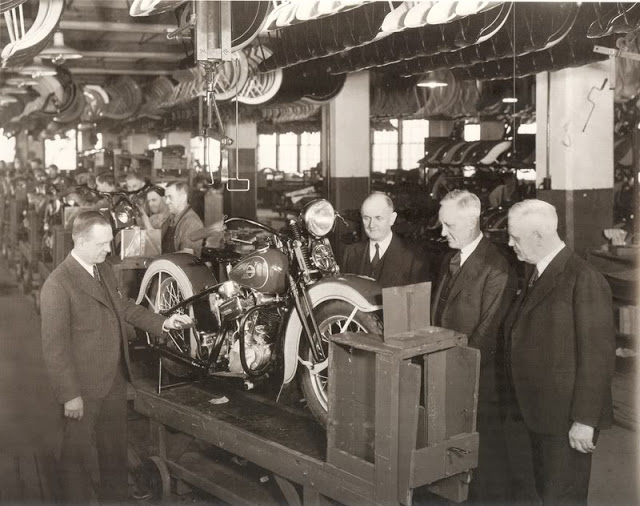 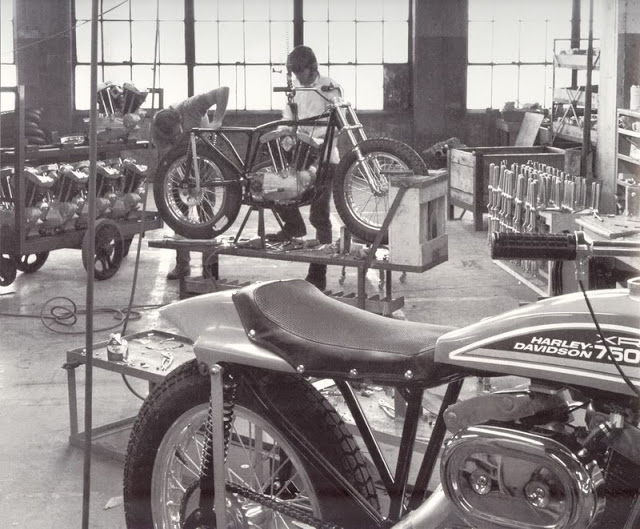 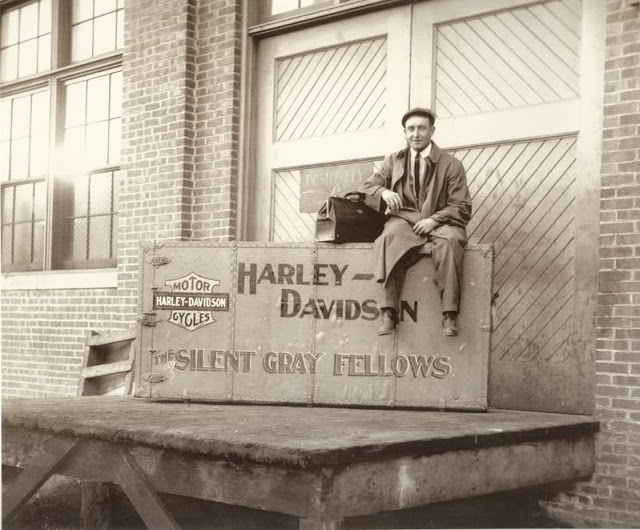