The Irish Civil War was a conflict that followed the Irish War of Independence and accompanied the establishment of the Irish Free State, an entity independent from the United Kingdom but within the British Empire.

The civil war was waged between two opposing groups, Irish republicans and Irish nationalists, over the Anglo-Irish Treaty. The forces of the Provisional Government (which became the Free State in December 1922) supported the Treaty, while the Republican opposition saw it as a betrayal of the Irish Republic (which had been proclaimed during the Easter Rising). Many of those who fought on both sides in the conflict had been members of the Irish Republican Army (IRA) during the War of Independence.

The Civil War was won by the Free State forces, who benefitted from substantial quantities of weapons provided by the British Government. The conflict may have claimed more lives than the War of Independence that preceded it, and left Irish society divided and embittered for generations.

These war-time photographs were colourized by photographer and colourist John O'Byrne from Rathangan, Kildare, Ireland that show the Irish conflict which led to thousands of deaths and prisoners of war. 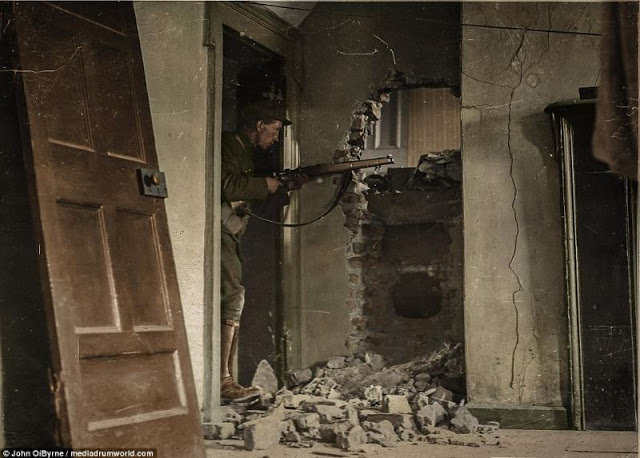 Irish Free State Army soldier in firing position inside a badly damaged house. His rifle is pointed through a hole in the wall of a room and debris is lying on the ground and a door has been kicked off its hinges. The treaty also stipulated that members of the new Irish parliament would have to take the following Oath of Allegiance: "I... do solemnly swear true faith and allegiance to the Constitution of the Irish Free State as by law established, and that I will be faithful to His Majesty King George V, his heirs and successors by law in virtue of the common citizenship of Ireland with Great Britain and her adherence to and membership of the group of nations forming the British Commonwealth of nations" 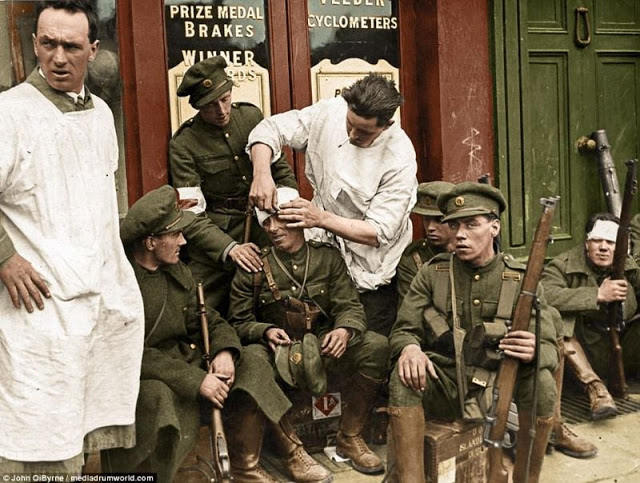 Free State Soldiers take a break from fighting on the street in Dublin possibly during the fighting of the four courts where wounded men are being tended to while others catch their breath. The Irish Civil War was a conflict that followed the Irish War of Independence and came alongside the establishment of the Irish Free State, an entity independent from the United Kingdom but within the British Empire. The civil war was waged between two opposing groups, Irish republicans and Irish nationalists, over the Anglo-Irish Treaty 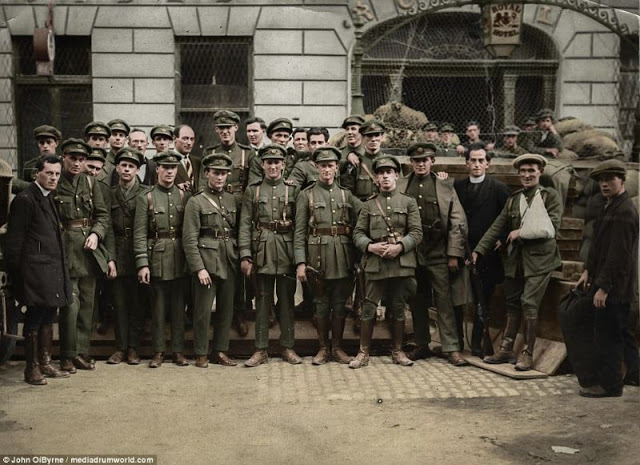 Irish Free State Army officers and men outside the Royal Hotel in Limerick. Some are smoking and one is sporting an injured arm. The group includes two clergymen and some civilians. The hotel was fortified with a barricade, wire and sandbags. The forces of the Provisional Government - which became the Free State in December 1922 - supported the Treaty, while the Republican opposition saw it as a betrayal of the Irish Republic, which had been proclaimed during the Easter Rising. Many of those who fought on both sides in the conflict had been members of the Irish Republican Army (IRA) during the War of Independence 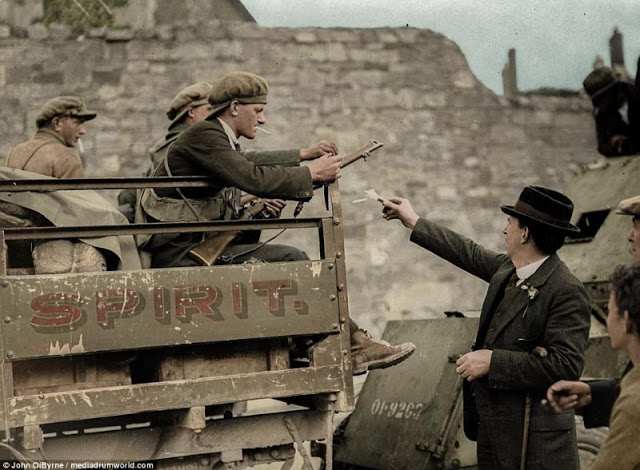 A man in civilian clothes reaching up with cigarettes to Irish Free State Army soldiers in a spirit merchant's truck as locals stand by watching. 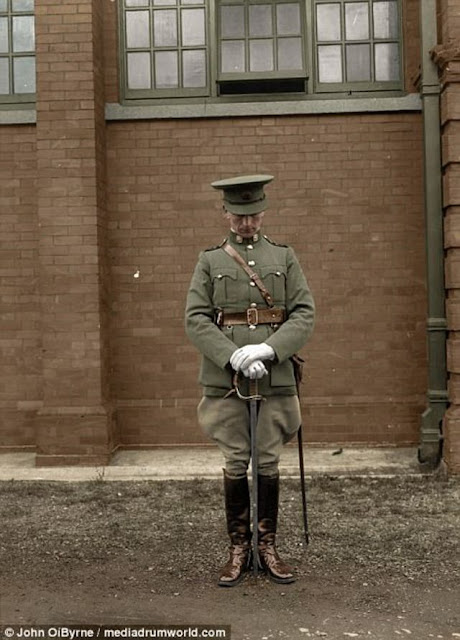 An unmounted officer stands with a drawn sword held at shoulder height in a sword drill under the supervision of Captain Flanagan and Captain Nolan at McKee Barracks Dublin. 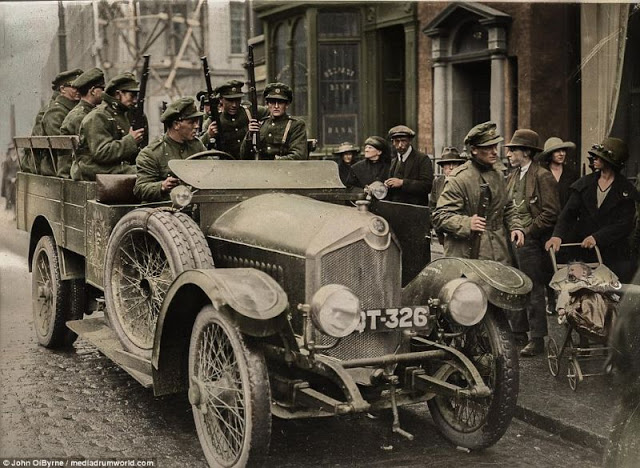 A personnel carrier containing a group of Irish Free State Army soldiers drawing up outside the Belfast Banking Company in College Green, Dublin, watched by curious onlookers, including a woman with a baby in a pram. Exact casualties numbers have been hard to determine in the aftermath of the war, but it is estimated. Around 800 pro-Treaty fighters backed by the UK fighters are thought to have been killed while up to 3,000 anti-Treaty fighters are said to have died. Although the conflict lasted less than a year - from June 28, 1922 to May, 24 1923 - it is thought up to 12,000 were taken as prisoners of war by the British-backed forces. 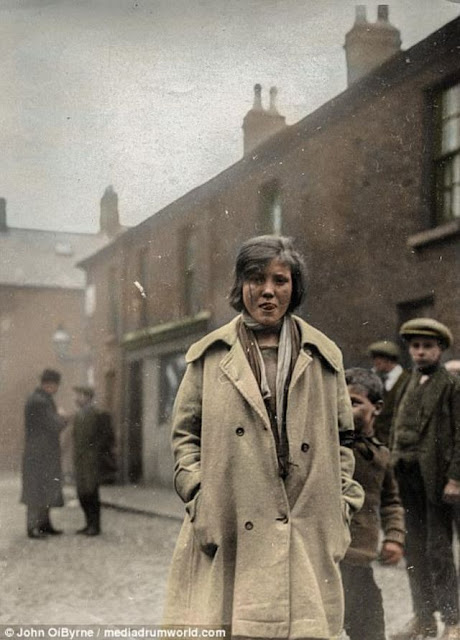 A young girl wearing an ill-fitting coat  stands in a street of terraced houses thought to be in Belfast. Some boys are looking on and two men are having a conversation in the background. 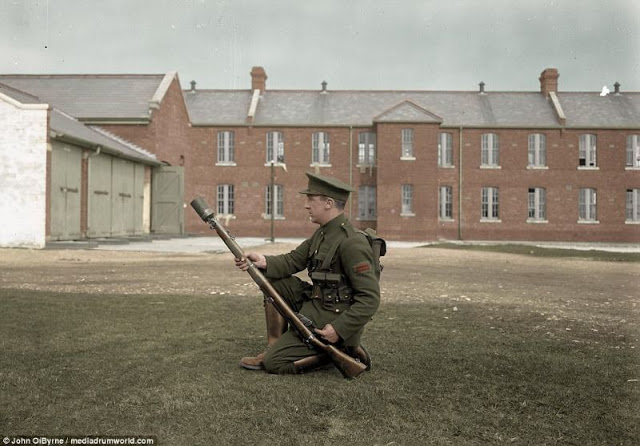 An infantry sergeant holding a grenade launcher in a glass plate negative showing an the infantry sergeant. The picture was printed to display how to fire a grenade from a Lee Enfield rifle from the kneeling position. This plate could have been used for instructional purposes and used in training manuals. The Anglo-Irish Treaty was agreed to end the 1919 to 1921 Irish War of Independence between the Irish Republic and the United Kingdom of Great Britain and Ireland. The treaty provided for a self-governing Irish state, having its own army and police and also allowed Northern Ireland's counties of Fermanagh, Antrim, Tyrone, Derry, Armagh and Down where the majority population was of the Protestant religion to opt out of the new state and return to the United Kingdom – which it did immediately. 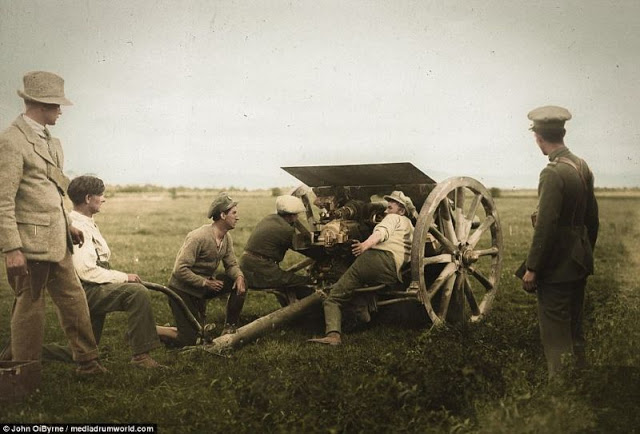 Group of Irish Free State Army soldiers grouped behind heavy field artillery. Two of the soldiers appear to be manoeuvring the gun into position watched by the others, including one wearing civilian tweeds. Rather than creating the independent republic favoured by most nationalists, the treaty meant the Irish Free State would be an autonomous dominion of the British Empire with the British monarch as head of state, similar to Canada and Australia. The British suggested this dominion in secret correspondence even before treaty negotiations began, but then Sinn Féin leader Éamon de Valera rejected it. 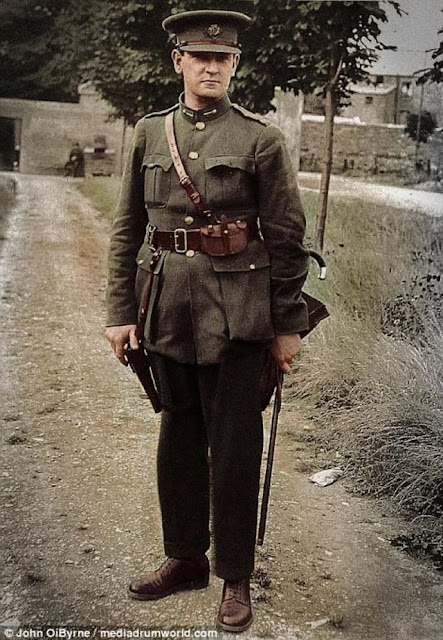 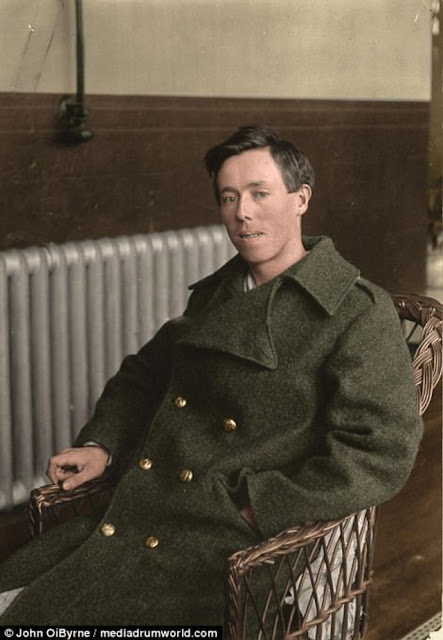 An Irish Free State Army soldier wearing his uniform coat but sitting in a wicker chair. He is identified in the caption as John Foley, third battalion, wounded in the thigh. 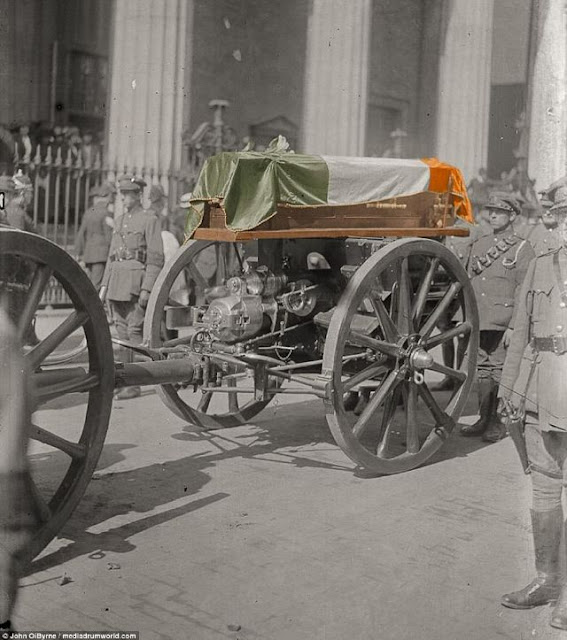 A photograph from the funeral of Michael Collins. The Irish flag is actually facing the wrong way - a mistake only noticed after it was placed on the coffin. The green should be at the head of the coffin. Michael Collins is an influential figure in the history of twentieth century Ireland. After the controversial treaty negotiations with Britain, he was appointed Chairman and Minister of Finance of the provisional government which was responsible for the establishment of the Irish Free State. He played a decisive role in devising a constitution, creating security forces and appointing a civil service. He was murdered while on an inspection tour of Munster and searching for a basis for peace with IRA leaders opposed to the Treaty.

Posted by Yesterday Today at 11:10 AM