Armless and Legless Men Riding a Tandem in the 1890s

Charles B. Tripp, the armless man and Eli Bowen, the legless man, riding a tandem. ca. 1890s. While the pair posed for promotional photographs one of them spotted a tandem bicycle. In no time at all the two gents not only mounted the bicycle-built-for-two, but rode off together laughing as boys would. The photographer quickly snapped the pair mid-ride and the resulting surreal photograph still draws perplexed smiles. 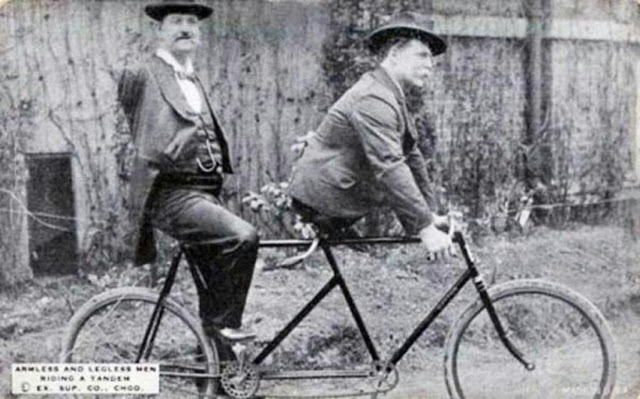 Charles B. Tripp - The Armless Wonder

Charles B. Tripp (1855-1930) was a Canadian-American artist and sideshow performer known as the "Armless Wonder".

A native of Woodstock, Ontario, Tripp was born without arms, but learned to use his legs and feet to perform everyday tasks. He was a skilled carpenter and calligrapher and started supporting his mother and sister when he was a teenager. In 1872, Tripp visited P. T. Barnum in New York City and was quickly hired to work for Barnum's Great Traveling World's Fair. He worked for Barnum (and later James Anthony Bailey) for twenty-three years, then toured for the Ringling brothers for twelve years.

On stage, Tripp cultivated a gentlemanly persona and exhibited his skills in carpentry and penmanship. He also cut paper, took photographs, shaved, and painted portraits. For extra income, he signed promotional pictures of himself with his feet. Tripp often appeared in photographs with Eli Bowen, a "legless wonder" from Ohio. In the photographs, the two rode a tandem bicycle, with Tripp pedaling and Bowen steering.

By the 1910s, Tripp was no longer drawing large crowds for the major circuses, so he joined the traveling carnival circuit. He was accompanied by his wife, Mae, who sold tickets for midway attractions. Tripp died of pneumonia (or asthma) in Salisbury, North Carolina, where he had been wintering for several years. He was buried in Olney, Illinois.

Eli Bowen (1844-1924) was an American sideshow performer known as "The Legless Wonder", or "The Legless Acrobat". He was also billed as "The Handsomest Man in Showbiz" and the "Wonder of the Wide, Wide World". He was born with his feet attached to his pelvis (without leg bones). One of ten normal children, Eli learned to use wooden blocks in his palms as ‘shoes' thus elevating his torso in order to walk on his hands.

He started his professional career at the age of 13 in various wagon shows before eventually touring independently, performing in dime museums and finally touring Europe with Barnum and Bailey Circus.

He established a reputation for being a magnificent and effortless tumbler and acrobat. He also performed phenomenal feats of strength. Bowen commanded a salary of over $100 a week and had one of the longest lasting and most popular sideshow acts of his era.

Bowen was married and had four healthy sons all of whom became successful and prosperous. Although wealthy and secure, Eli loved life in the public eye and could not give up performing. On May 2, 1924, at age eighty, Eli Bowen passed away just days before a scheduled performance for The Dreamland Circus at Coney Island.
Posted by Yesterday Today at 12:02 PM