There are hundreds of photos of Marilyn Monroe, one of Hollywood’s most iconic stars, but the most famous photo of all was shot on September 15, 1954 by photographer Sam Shaw on the set of Seven Year Itch. However, there is more to the story than that, including why she faced the photographer and posed the way she did. 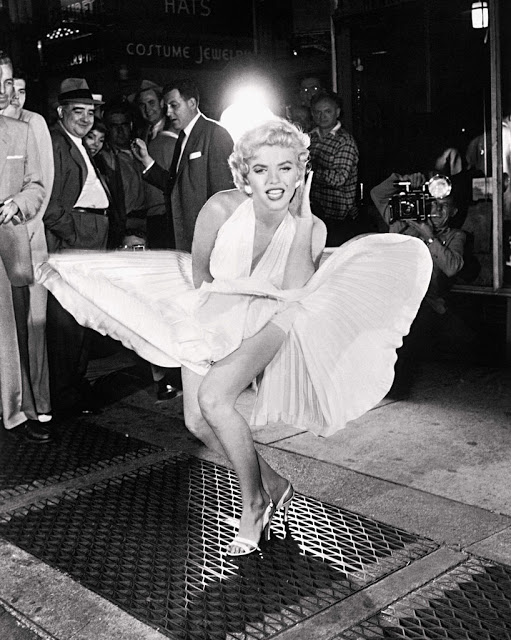 In the early 1950s, Sam Shaw was working in the film industry as a stills photographer. While on the set of biopic Viva Zapata! in 1951, he met Monroe, who at the time was a struggling actress employed on contract at the 20th Century Fox studios. Shaw couldn’t drive and Monroe, then the girlfriend of the film’s director Elia Kazan, was asked to give him a lift to the film set every day.

Shaw and Monroe developed a close friendship. She called him ‘Sam Spade’, a reference to the fictional private detective created by Dashiell Hammett. Soon he began photographing her in informal portraits that captured her playful personality. Shaw said, ‘I just want to show this fascinating woman, with her guard down, at work, at ease off-stage, during joyous moments in her life and as she ?often was – alone.’

By 1954, when Monroe was chosen for the lead role in Billy Wilder’s comedy The Seven Year Itch, she was on the way to becoming a major star. She was 28 years old and had played lead roles in films such as Gentlemen Prefer Blondes and How to Marry a Millionaire (both released in 1953). She had married her second husband, baseball star Joe DiMaggio, in January that year

In The Seven Year Itch, Monroe played the glamorous neighbour with whom middle-aged publishing executive Richard Sherman, played by Tom Ewell, becomes infatuated. At one point in the script, Monroe and Ewell stroll through a New York street and walk over a subway grate. 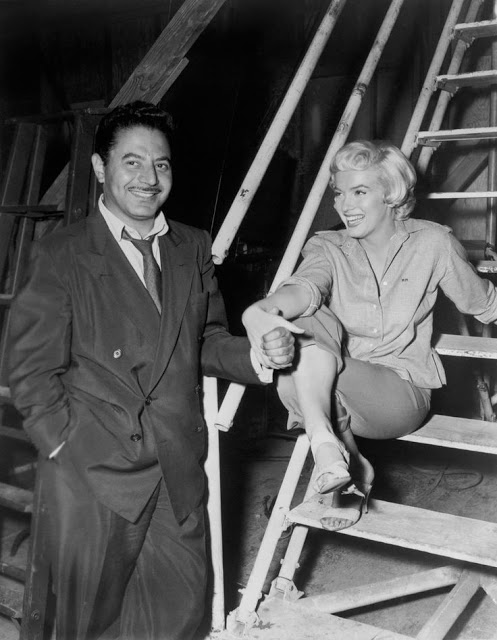 When reading the dialogue for this scene, Shaw saw the opportunity to use an idea he’d had several years earlier. He had been visiting the amusement park on Coney Island when he saw women exiting a ride and having their skirts blown upwards by a blast of air coming from below ground. He suggested to producer Charles Feldman that this scene could provide a set-piece poster image for the film, with a blast of air from the grate blowing Monroe’s dress in the air.

The movie scene was originally shot outside the Trans-Lux Theatre on Lexington Avenue, at around 2am. Despite the shoot’s timing, a crowd gathered to watch. Monroe was wearing a white pleated halterneck dress. A wind machine underneath the grate sent the dress billowing up above her waist, revealing her legs. As the scene was re-shot, the crowd became increasingly boisterous. 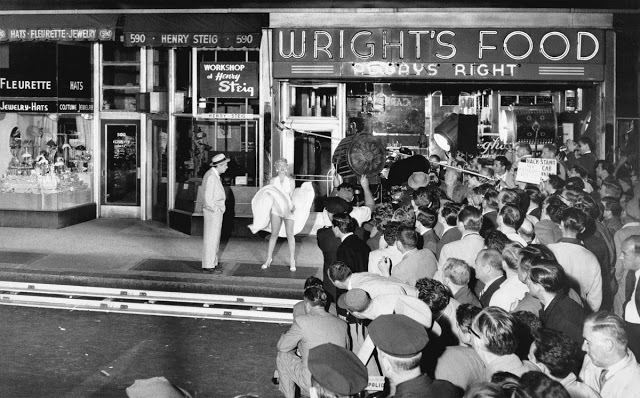 At the publicity stunt in New York, a large crowd of bystanders and press were invited to create hype around the filming. (Photo © Sam Shaw Inc.)

After the filming had finished, Shaw arranged for the moment to be recreated in a press photocall. Photographers including Magnum’s Elliott Erwitt stood around her as the dress was again blown upwards. Shaw, having organised the event, secured himself the best position to record it. As Monroe posed with her dress flying high, she turned to face him and said, ‘Hey, Sam Spade!’ He pressed the shutter on his Rolleiflex. 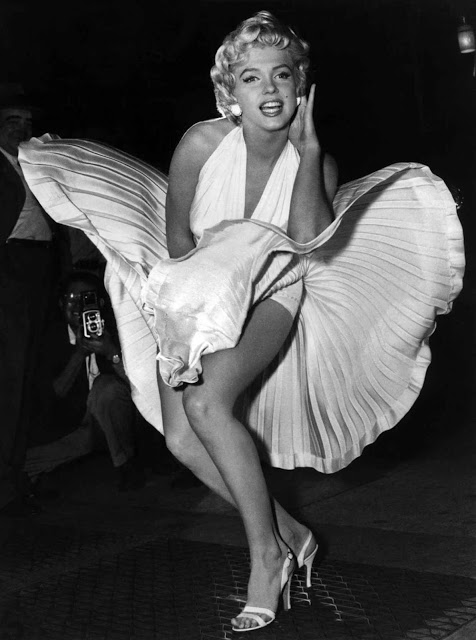 The iconic image of Marilyn Monroe was shot by photographer Sam Shaw during the filming of The Seven Year Itch. (Photo © Sam Shaw Inc.)

Shaw’s picture, with Monroe looking provocatively into his camera, is the best of the images from that shoot. The shots taken that night were published the next day in newspapers and magazines around the world. They not only brought great publicity for the film, but also cemented Monroe’s image as one of the sex symbols of the era.

However, one of the onlookers at the shoot was Joe DiMaggio, and the sight of a crowd of men ogling and whistling at his wife sent him into a jealous rage. He left the set, angrily saying, ‘I’ve had it!’ The incident led directly to the couple’s divorce in October 1954, after just nine months of marriage. 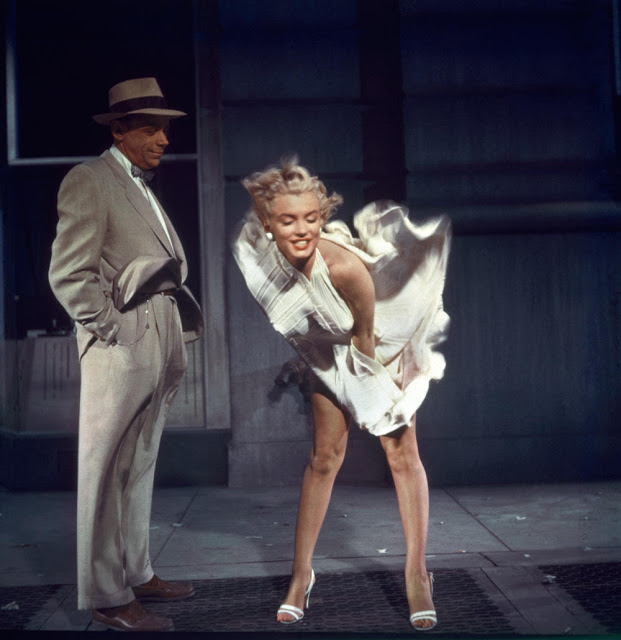 Marilyn Monroe breezes through filming with her Seven Year Itch co-star Tom Ewell in a photograph by Sam Shaw. It was Shaw's idea to orchestrate the "flying skirt" image and use it to promote the movie. (Photo © Sam Shaw Inc.) 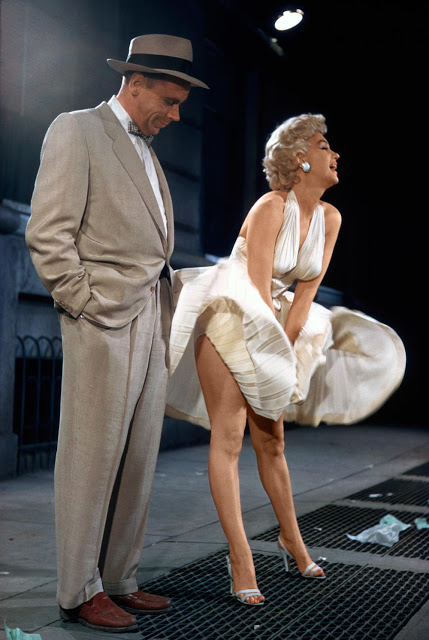 When the breeze from the subway catches her skirt, Monroe's line "Isn't it delicious" was provocative for a 1950s woman, but very apropos of the most famous sex symbol of the day. (Photo © Sam Shaw Inc.) 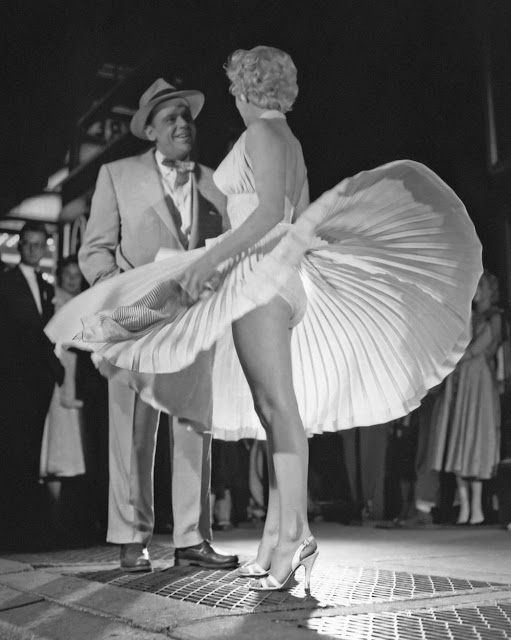 The iconic Seven Year Itch scene was shot on Lexington Avenue between 52nd and 53rd Street with an invited crowd and press. The crowd noise made the footage unusable and director Billy Wilder reshot the scene on a soundstage in Los Angeles. (Photo © Sam Shaw Inc.) 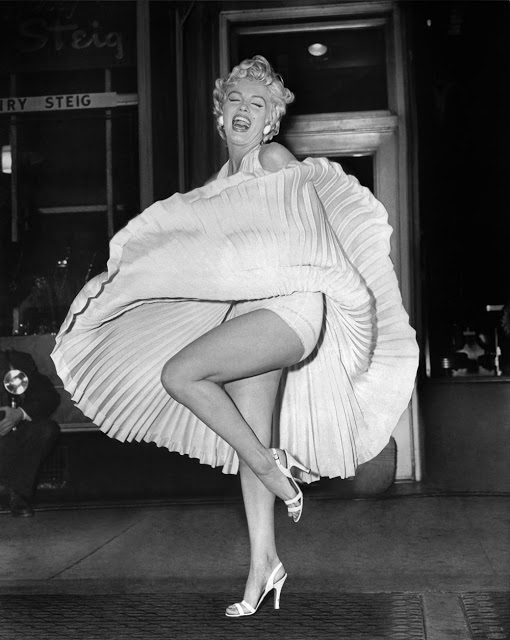 Ironically, the filming done that night couldn’t be used as there was too much noise on set. The scene was later re-shot on a closed studio set in Los Angeles, with Shaw the only photographer present.

The scene went on to become one of the most famous in cinema history. Its importance was demonstrated in 2011 when the original white dress worn by Monroe was sold at auction for $4.6 million.

Shaw and Monroe often worked together in the following years and remained close friends until she died aged 36, in August 1962. As a mark of respect, he refused to publish any of his Monroe photographs for ten years after her death.

Shaw went on to photograph many more actors, artists and musicians, and became a movie producer in the 1960s. He had a long and productive career, but the experience of knowing Monroe remained an important part of his life.

To Shaw, she always remained ‘a contemporary Aphrodite… a beautiful, almost otherworldly creature who left behind some of that beauty’.

(via Amateur Photographer and Biography.com)
Posted by Yesterday Today at 10:23 AM