Hawaii, 1890: This Is the First Known Photograph Ever Taken of a Surfer!

Dating back to 1890 this is perhaps the first photo ever taken of a surfer. The muscled Hawaiian beach man is photographed wearing a traditional loin cloth and shown standing in the shallows holding his rudimentary board. The original owner and the photographer are not known. 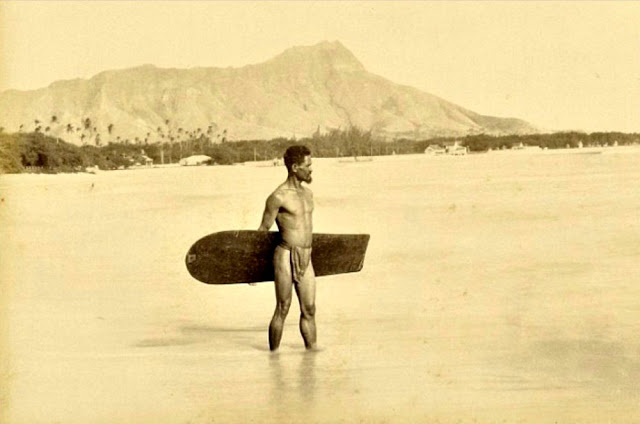 Photo of surfer wearing traditional garb with Diamond Head in the background. Oahu, 1890.

Surfing rituals and the sport itself continued in the Kapu system until missionaries from New England began arriving in 1820. The missionaries believed surfing and other Hawaiian sports to be hedonistic acts and a waste of time. They adamantly preached against the sports' existence in Hawaii.

By 1890, surfing in Hawaii was nearly extinct, with the sport practiced in only a few places. The rapidly growing agricultural empire coming into place, coupled with the immigration of foreigners, also contributed to the decline of surfing, along with many other sacred aspects of the Polynesian culture. If not for the dedication of a few Hawaiian kings like David Kalakau, an advocate of all Hawaiian sports, surfing may not have survived to see the 20th century.

Posted by Yesterday Today at 1:46 PM