In 1952, Georges Monneret Built an “Amphibious Vespa” for the Paris-London Race and Successfully Crossed the English Channel on It

In 1952, French motorcycle racing champion Georges Monneret leaving Paris, France for for Calais, where he was met with a crew who installed a pair of custom pontoons to scooter. It was an amphibious craft powered by a 1952 125cc Vespa Douglas. From there, Monneret went about crossing the famed English Channel aboard the waterborne scooter. 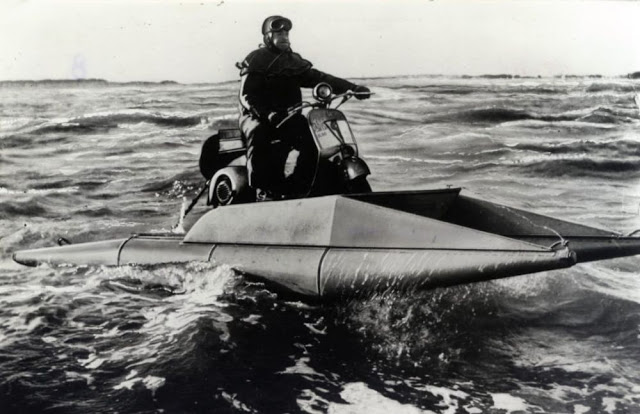 This idea came to him by reading an Italian magazine in which an Italian, whose history did not remember his name, ventured on a lake with a scooter mounted on floats.

It all started with the Paris to London race in 1952. Georges had always been into racing so of course he wanted to not just win, but to beat a record while he was at it. He decided that the fastest way to England was via the channel but to cross he would have to build a craft that allowed him to take his Vespa on, cross and ride it back off. He set about designing such a craft, working out different techniques and learning watercraft engineering till eventually, it was born. 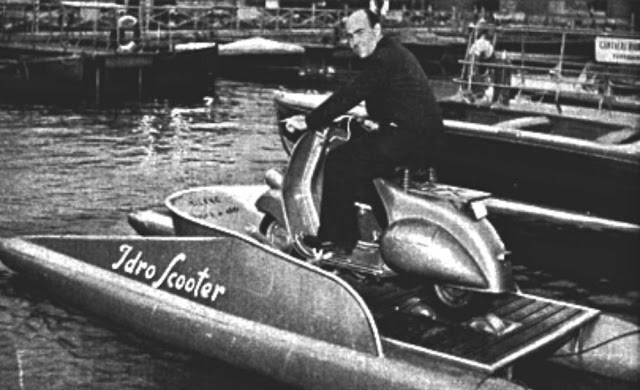 The craft consisted of two long aluminium pontoons, a wooden platform for the Vespa, a steering system that used the front wheel of the Vespa to steer the rudder and two rollers beneath the rear wheel to power the three bladed propeller via a three speed gearbox. The propeller could also be raised and lowered for beach landings. It was very simple but it worked. It was stable and the Vespa could be taken on and off to ride in a matter of minutes. It was perfect for the journey. The Vespa also had a larger fuel tank installed.

On October 8, 1952, at midnight, Georges Monneret left the Place de la Concorde in Paris with his destination set as Calais. The race had begun. All the opponents ride from Paris to Calais as fast as they could. After 4 hours and 55 minutes, Georges reached Calais, everyone else arrived later and they all went to the hotel for a drink while they waited for the next ferry. All except for one person, Georges.

He rolled out his watercraft while his opponents watched in amazement and jealousy. The craft was mechanically perfect and the Vespa was running brilliant. It seemed perfect, but of course here had to be one problem, the weather was not on his side. He strapped up the Vespa as tight as he could and set off out to the channel in good spirits. The waves were huge but he was determined to get his record. Unfortunately the heavy waves damaged the craft's drive shaft forcing him to turn back to Calais and make repairs as it was impossible to do it at sea.

At 8 am, Monneret set out again more determined than ever. He "rode" out of the harbour to find that luckily the weather had calmed down slightly making crossing the channel so much easier. He was thrown about by the remaining waves until he eventually made it to Dover at 5pm where he was greeted by the amazed and slightly shocked locals. He unstrapped the Vespa and hurried to London as quickly as he could. I'm happy to report that he did win the race and as a bonus, gained his record. Being that brave, he definitely deserved it. Overall it took him 15 hours from Paris to London. 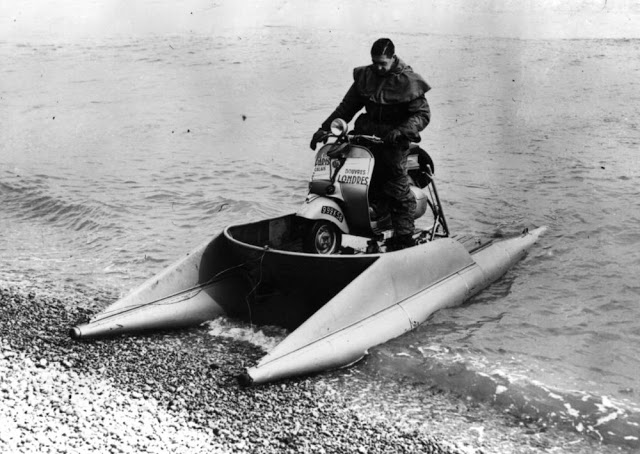 Of course, crossing the Channel was only one of Monneret’s many feats, as the French motorcycle racer won 499 wins and 183 world records during his career, including winning the Circuit of Orleans in 1935, the Motorcycle Grand Prix of France in 1936, and placing second of the 1939 24 Hours of Le Mans. 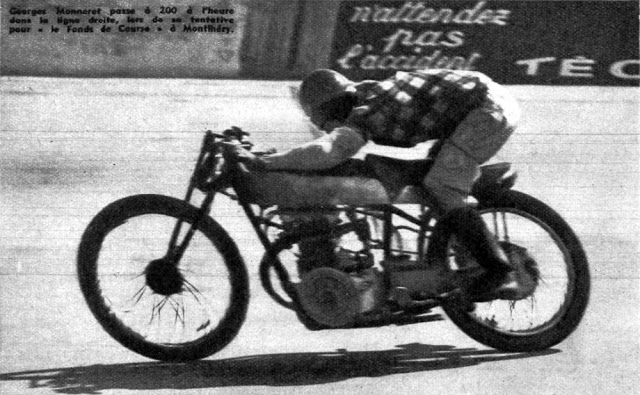 Georges Monneret during the "Fonds de Course" 1938 at Monthléry.

(via Aminoapps.com)
Posted by Yesterday Today at 9:43 AM