Interesting Photos of Computer Stores in the 1970s and 1980s

In the late 1970s and throughout the 1980s, if someone wanted to buy a personal computer, they had to make a trip down to a local computer store to physically check out what was available. Once there, customers typically encountered a dizzying array of incompatible platforms with widely varying capabilities.

Here's a small collection of interesting snapshots curated by PCMag.com that give a glimpse into what it was like to visit one of those stores back then. 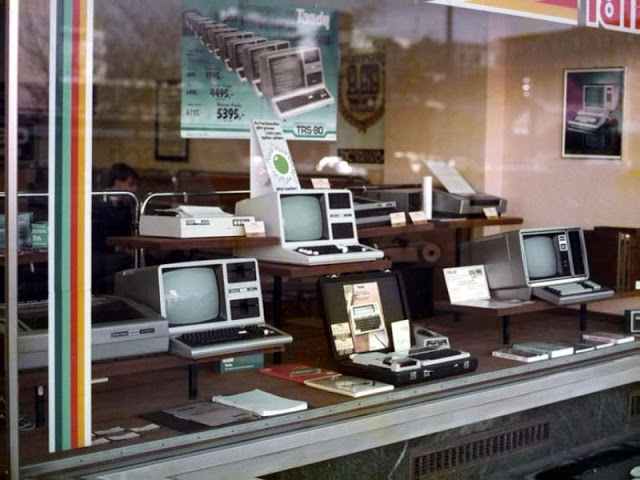 Imagine walking down the street in the 1980s and being greeted by this handsomely arranged scene of Radio Shack TRS-80 computers. That's exactly what the photographer encountered at a computer store in West Germany in 1984. From left to right, we see a TRS-80 Model III, Model 4, Model 100 (in the travel case), and a Model II -- along with various Tandy brand printers beside them. (Photo: Christopher Grabinski) 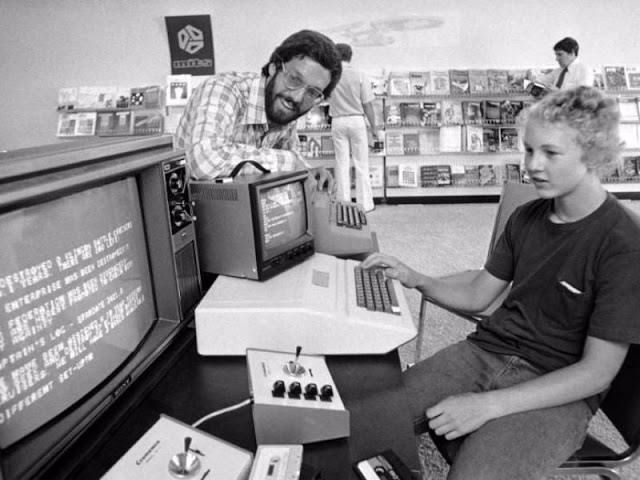 In this wonderful photo of the Los Angeles-based Computer Store from 1977, we get a rare peek at the inside of a PC shop from the dawn of the personal computer era. Here we see a teenager playing Star Trek on a then brand-new Apple II (possibly built from a kit, since it is missing its logo badge) while the store's owner, Dick Heiser, looks on. In the foreground sit a pair of Cromemco joysticks, which were used for playing Space War on S-100 bus machines. (Photo: George Birch) 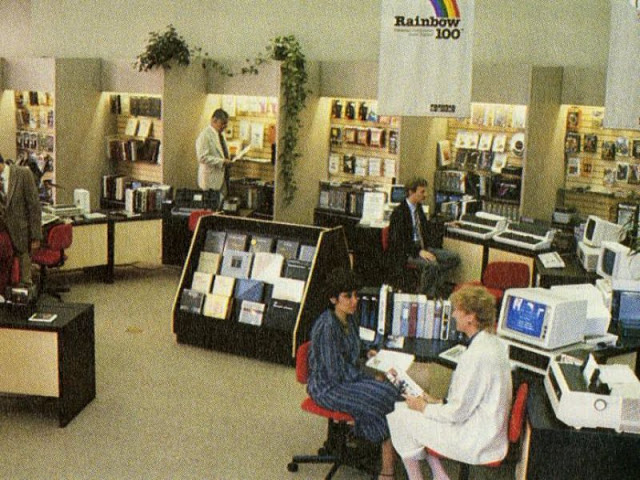 During the 1980s, ComputerLand reigned as one of the most successful computer store chains in America. Here is a rare shot of an interior of one, circa 1983, that features IBM PCs, a few DEC Rainbow 100 machines, and a wall of software and removable media for sale. There's also an Osborne 1, one of the first "portable" computers, sitting on a desk near the man standing in the back. (Photo: ComputerLand) 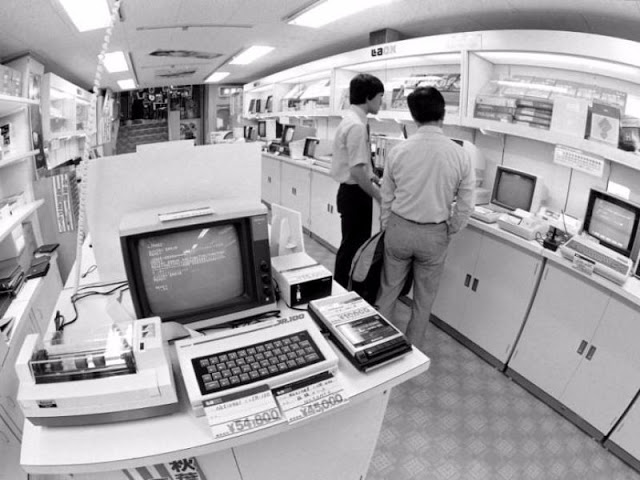 In this 1982 photo from a computer store in the Akihabara district of Tokyo, Japan, we see a cramped interior lined with uniquely Japanese computer goods. For example, the machine in the foreground is the Matsushita JR-100, an inexpensive machine with 16K of RAM and a rubber chiclet keyboard. Several other home PCs line the walls as customers look on. (Photo: Katsumi Kasahara) 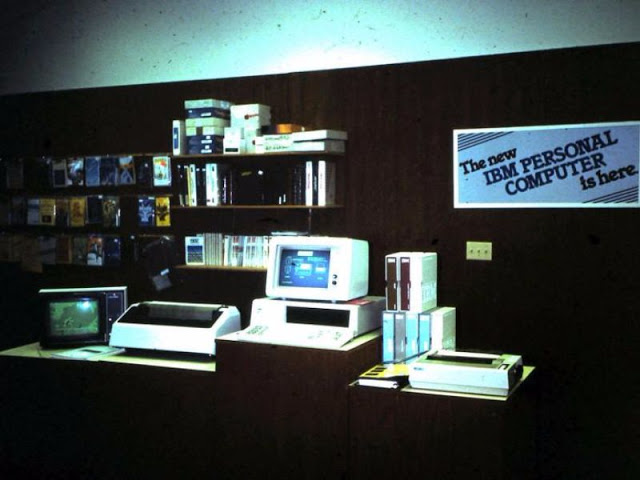 In this 1981 photo from an unknown Boston, Massachusetts area computer store, we see a display showcasing the new IBM Personal Computer 5150, which was released in August of that year in the US. Next to it we see a precarious stack of IBM PC manuals and software boxes, along with a couple of printers. (Photo: IBM) 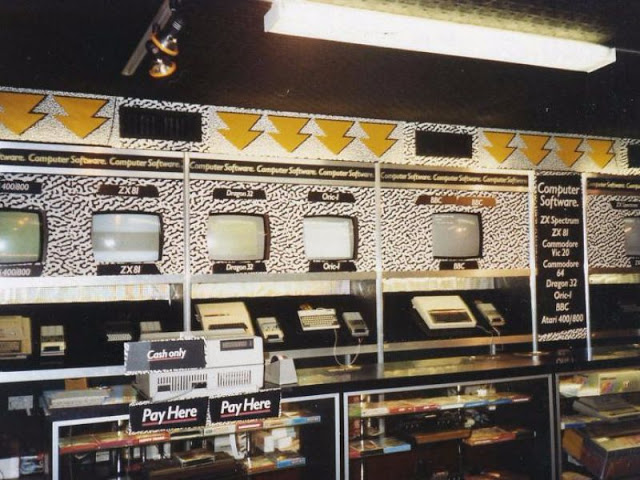 Computers hit the entertainment retail scene in a big way during the early 1980s, as can be seen in this photo of the interior of British retail giant HMV's store on Oxford Street in London. Among the movies and music you could typically buy at the shop, customers encountered a wall-filling display of home PCs such as the Atari 400/800 computers, the Sinclair ZX81, the Dragon 32, the Oric-1, and the BBC Microcomputer. (Photo: hmv) 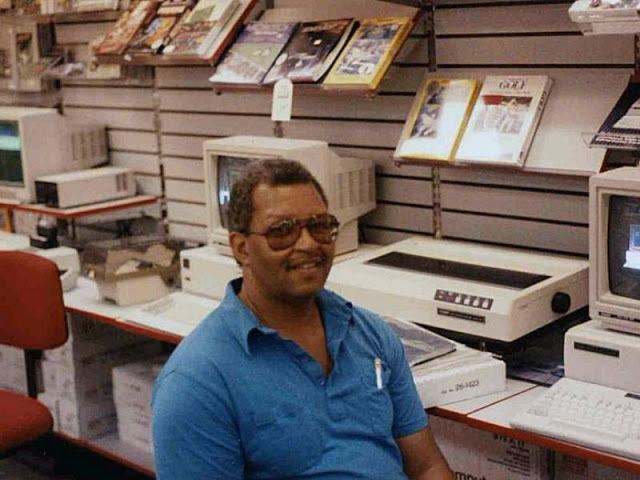 In this snapshot from the late 1980s, we see the interior of a ComputerLand store in Tallahassee, Florida. In the foreground sits Dr. Tom Mason, who was a computer science professor at University of Illinois at Champaign/Urbana. Behind Mason on the desk, we can see (from left to right) an obscured Tandy Color Computer 3, a Tandy 3000, and a Tandy 1000. ComputerLand let customers try the machines in the store to get a feel for what they would like to purchase. (Photo: George Clark)