The Amazing Story Behind the Picture of a Soldier Feeding a Tiny Kitten in Korean War, 1952

In the middle of the Korean War, this kitten found herself an orphan. Luckily, she found her way into the hands of Marine Sergeant Frank Praytor. He adopted the two-week-old kitten and gave her the name “Miss Hap” because, he explained, “she was born at the wrong place at the wrong time”. There’s a juxtaposition between the soldier and the human. He’s dressed for war but hasn’t lost the ability to care for another living creature. 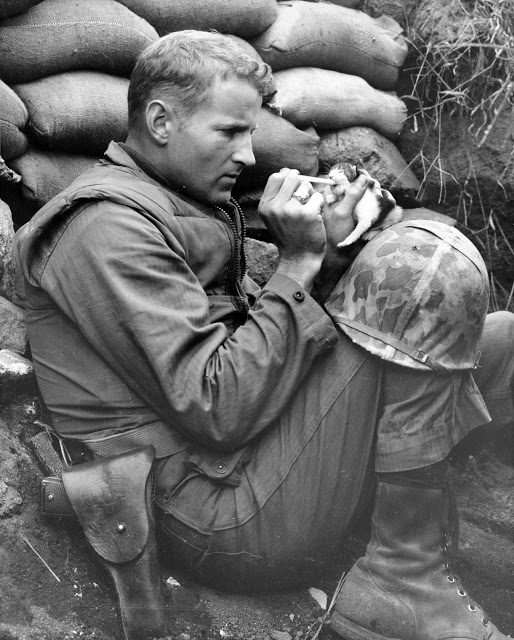 It was circulated that her mother was killed by a mortar barrage near Bunker Hill. That was not true. Sergeant Praytor, in a 2009 article in The Graybeards (the official publication of the Korean War Veteran’s Association), stated that Miss Hap’s mother was shot by a Marine up the line because of her yeowling. Since that would have caused negative reactions, Corps publicity told the mortar barrage story instead.

Miss Hap was one of two surviving kittens. Sergeant Praytor took care of her while the other was given to another man – who rolled over in his sleep and accidentally killed it. The photo above was taken by Staff Sergeant Martin Riley. Sergeant Praytor was feeding Miss Hap slightly watered-down canned milk with a medicine dropper. She was later weaned onto meat out of “C” ration cans.

Staff Sergeant Riley’s photograph was circulated and published in more than 1,700 American newspapers in 1953, including The New York Times. After Sergeant Praytor went home, Miss Hap was left behind in Korea. However, she was left in good hands and became a mascot in the Division PIO office. Sergeant Praytor saw her one more time when he returned briefly. Miss Hap’s second guardian was Cpl. Conrad Fisher of Cicero, Illinois who hoped to take her home. On whether or not Cpl Fisher was able to bring Miss Hap home, Sergeant Praytor remarked, “I like to think he did.”

In 2010, Praytor wrote, "Miss Hap was weaned on meat out of C rations and grew into a big girl who thought I was her father. When I left Korea, I left her in the care of another Marine. When I returned in '55, she was alive and well. At 83, I'm still saving orphans. Have two cats, Molly and Max. They never leave the house."