The Ideal Female Body Shape of the 1920s

In 1928, a group of Hollywood film studio artists drew “the ideal screen type.” An amalgamation of the famous disembodied parts of Hollywood stars, the ideal screen type was doe-eyed and fair, holding her willowy arms at a coy akimbo. Beside the artists’ illustration of the composite ideal appeared the remarkable photographic image of the composite ideal’s real-life double: silent film star Anita Page. 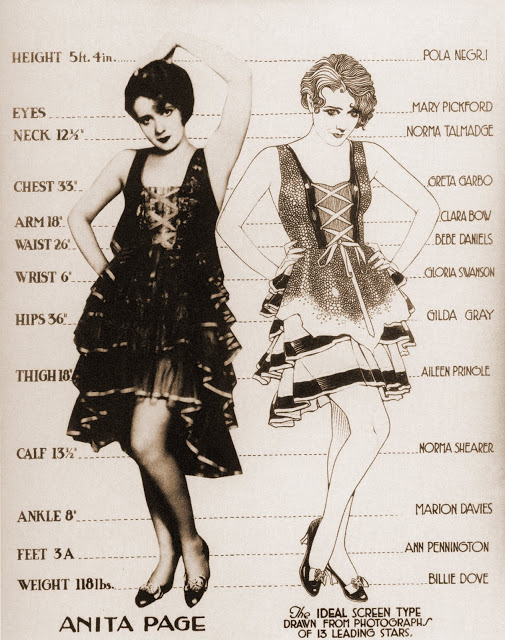 Born Anita Pomares, in Flushing, Queens, Salvadoran-American silent film star Anita Page possessed a beauty that was uncannily familiar: the eyes of Mary Pickford, the smooth white arms of Clara Bow, and the wasp-waist of Bebe Daniels. Had the camera trained its lens more closely upon Anita’s exquisite nose, this shot would have recorded her beautifully-full Latina nose as well. But beyond her composite physicality, Anita was also described as simultaneously both “a blonde, blue-eyed Latin” and “The Most Beautiful Girl in Hollywood.” No other Latina actress in Hollywood of the 1920s and 30s, aside from Anita Page, achieved star status without either effacing or caricaturing the Latin aspects of her body.

Posted by Yesterday Today at 10:05 AM