These incredible photos of the wreck at Gare Montparnasse in Paris shows a very dramatic scene of a train that has crashed through the wall and partially tumbled to the street. The cause? Both mechanical failure and human error. The train was late, so the driver had it pull into the station at a high speed. It had two different types of braking systems: handbrakes and an air brake known as a Westinghouse brake. The conductor realized that the train was going too fast and applied the Westinghouse brake, however it didn’t work. Read on for the story behind the incredible images. 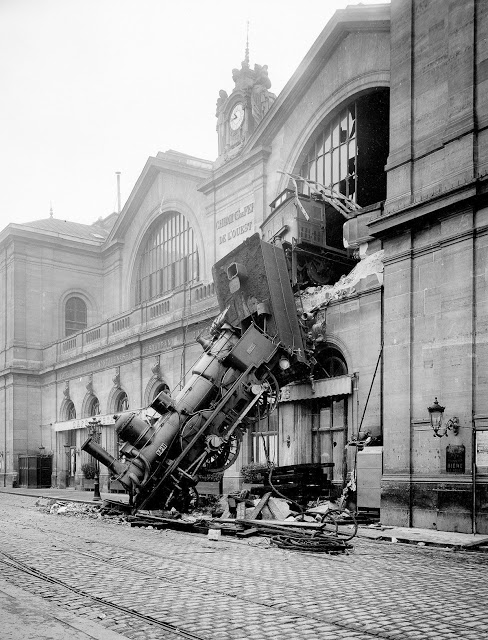 At first glance, the photos look like stills from an old disaster movie or a spectacular example of theme park scenery welcoming visitors to some wild new ride. However, these extraordinary images are actually testament to a real-life tragedy, the derailment of the Granville-Paris Express that on October 22, 1895 tore through the façade of the Gare Montparnasse, injuring a number of its conductors as well as a handful of passengers and claiming the life of a particularly unlucky mother of two.

Guillaume-Marie Pellerin had spent much of his life working the railroads. With 19 years of engineering experience behind him, the Express was in safe hands. As he fired up the engines that fateful Tuesday morning and the train pulled out of Granville station on time, there was nothing to suggest that the journey would result in one of the most infamous and instantly recognizable disasters in transportation history.

The route was a relatively simple one, roughly 400km from the seaside resort of Granville on the Lower Normandy coastline to the terminal at Paris Montparnasse. The train comprised a steam locomotive, three baggage cars, a postal car, and six passenger carriages. These days, the same journey takes around three hours, but back in 1895 it required closer to seven; despite a punctual start, Pellerin and his crew eventually realized that they were running a couple of minutes behind schedule. Keen to keep good time, the engineer made the momentous decision to approach Montparnasse at cruising speed, stoking the coals until the train was flat out at close to 60km/h.

With the station in sight, Pellerin applied the Westinghouse air brake which, unfortunately for all involved, chose that particular moment to fail. Conductor Albert Mariette, whose duty it was to apply the locomotive’s emergency handbrake, found himself temporarily indisposed, buried beneath a mountain of overdue paperwork. Failing to gauge the urgency of the situation until it was already too late, Mariette slammed on the brakes just a few feet short of the buffer and could only look on in horror as the train mounted the platform, skidded 100 feet across the station concourse before ploughing through the station facade and plummeting a final 30 feet to the Place de Rennes below.

Despite the damage to the station, the locomotive itself remained largely intact and all six passenger carriages stopped short of the obliterated façade, mercifully resulting in only a few minor injuries, a couple of squashed suitcases and some top hats knocked askew. Sadly, the sole casualty of the incident would usually have been nowhere near the scene. Marie-Augustine Aguilard, standing in for her newspaper vendor husband, was crushed by falling masonry as she stood awaiting his return.

An inquest into the disaster led to Pellerin, the engineer, being charged 50 francs for his reckless speeding while Mariette, the conductor who failed to apply brakes in a timely fashion, was also slapped with a hefty 25-franc fine. The train remained exactly where it had come to rest for two days while the investigation into its derailment was underway. An initial attempt to move it using a team of fourteen horses proved fruitless, ten men and a 250-ton winch eventually being required to lower the errant locomotive to the ground, where it was carted off for repair and found to have suffered remarkably little damage. 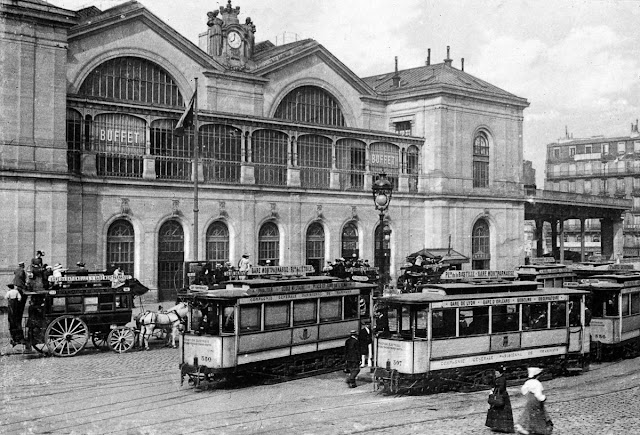 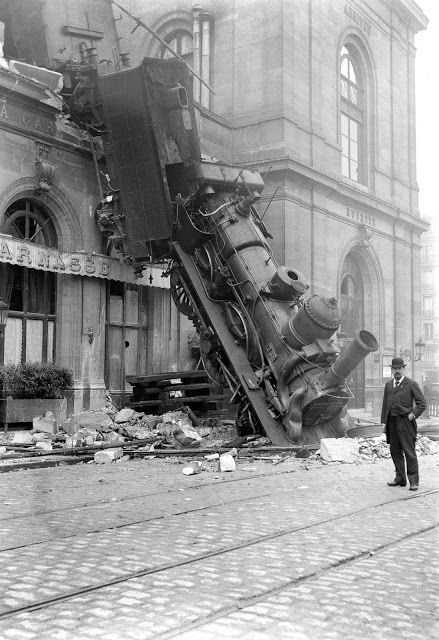 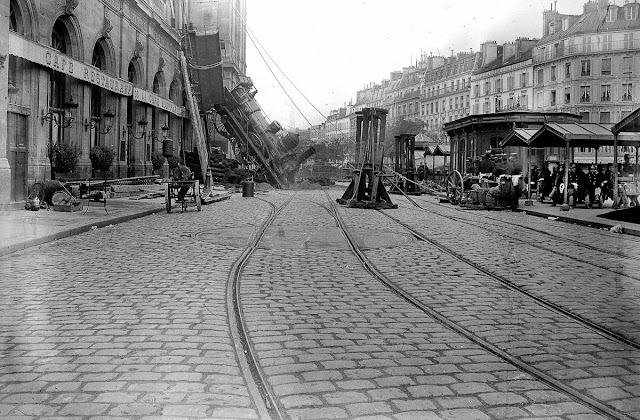 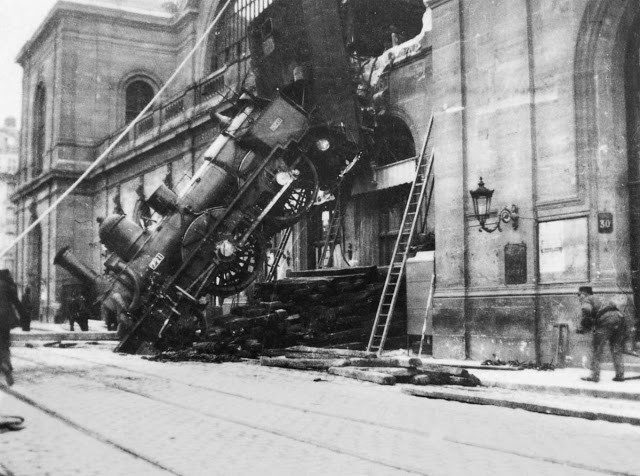 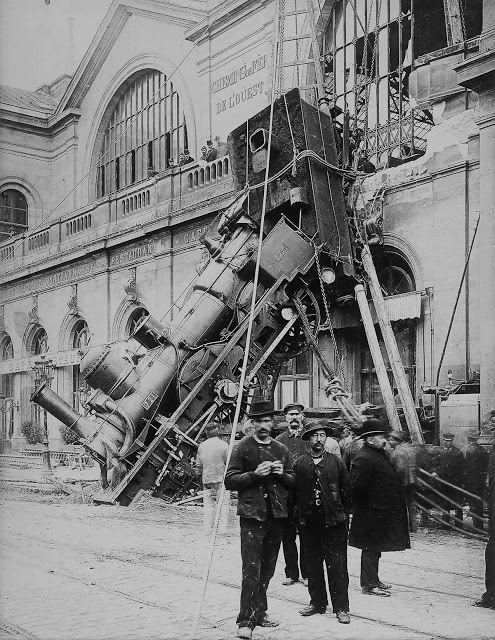 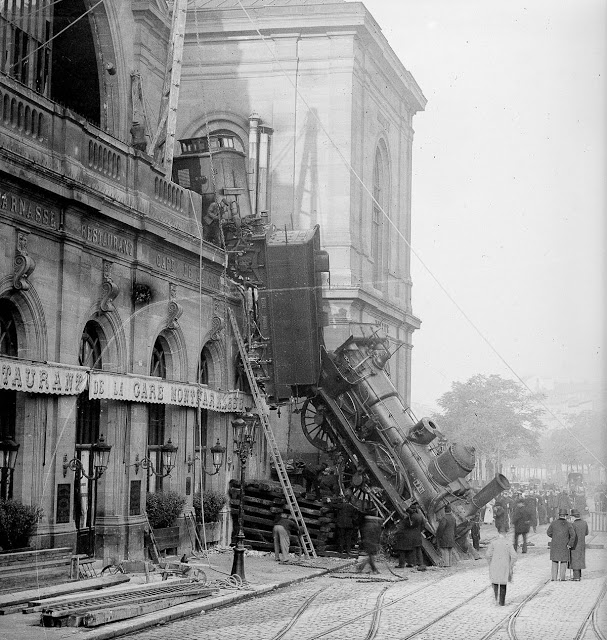 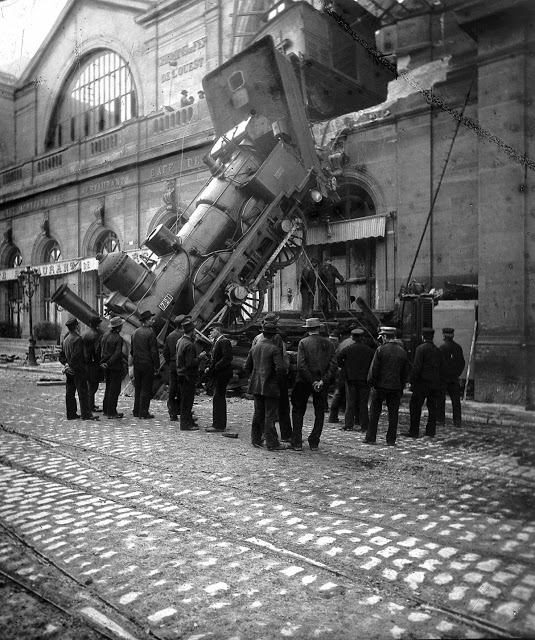 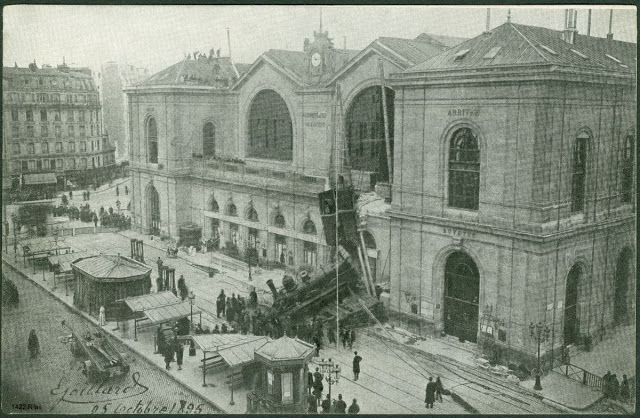 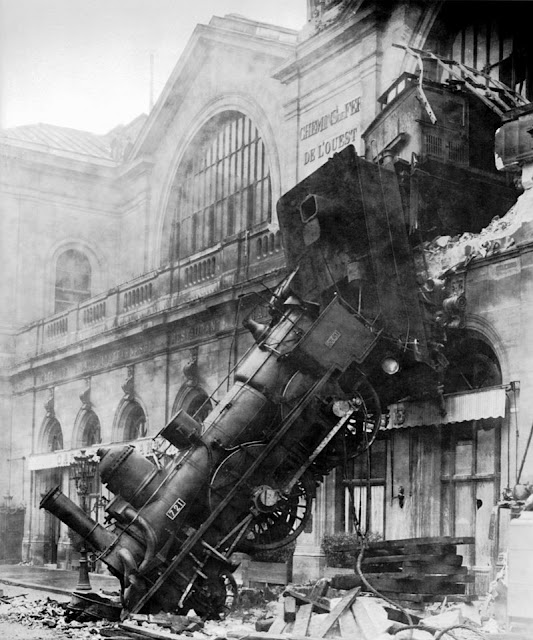 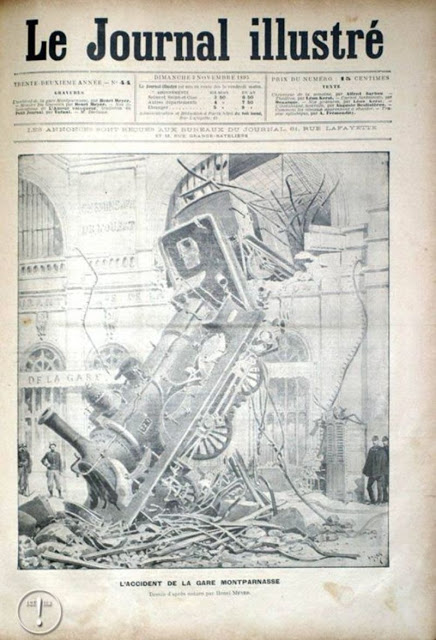 (via The Culture Trip)