The Great Escape is a 1963 American World War II epic film that depicts an escape by British Commonwealth prisoners of war from a German POW camp. The film is based on Paul Brickhill’s 1950 book of the same name, a non-fiction first-hand account of the mass escape from Stalag Luft III in Sagan (now Zagan, Poland), in the province of Lower Silesia, Nazi Germany. A heavily fictionalized version of the escape is depicted in the film.

The film was produced and directed by John Sturges. Steve McQueen stars in one of his most popular roles as American pilot Virgil Hilts aka ‘The Cooler King,’ named after the amount of time he spends in the ‘cooler’ after repeated escape attempts and run ins with the camp commandant. 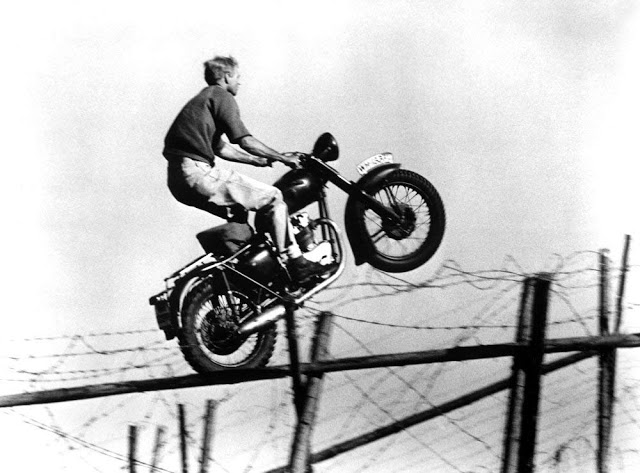 The famous Virgil Hilts motorcycle chase which is an integral part of the film’s appeal was McQueen’s idea. Initially the Hilts escape attempt was supposed to be by train, but McQueen approached Sturges with the suggestion, “John, I’ve got an idea that will put more juice into this...”

Steve McQueen performed all of his own motorcycle stunts in The Great Escape with the exception of his characters final jump over a 6ft (1.8m) barbed wire fence. The final jump was performed by his stunt double, Bud Etkins. 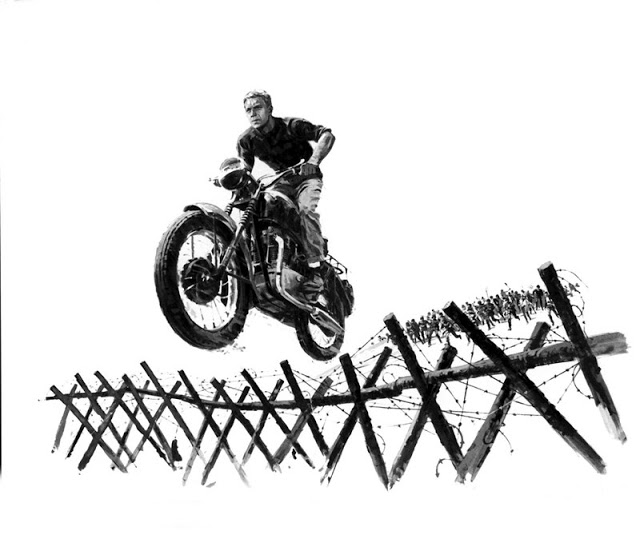 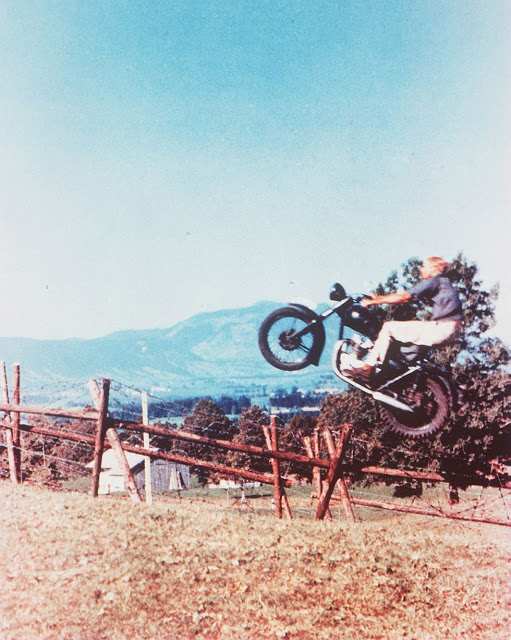 The bike used by McQueen in the film was a modified TT Special 650 Triumph which was painted olive drab and made to look like a german wartime BMW. As McQueen explained in a 1963 interview, “We had four bikes for this film. I was running a TT Special 650 Triumph. We painted it olive drab and put on a luggage rack and an old seat to make it look like a wartime BMW. We couldn’t use a real BMW, not at the speeds we were running, since those old babies were rigid-frame jobs, and couldn't take the punishment.”

As for the chase sequences, the three racers – Tim Gibbes (the Australian moto-cross champion), Bud Etkins, and Steve McQueen – took turns chasing one another as German soldiers. The special effects manager worked out the final scene, where Steve has to get through the fence to escape to Switzerland. Bud, Tim, and Steve were left to figure out how to do the jump. 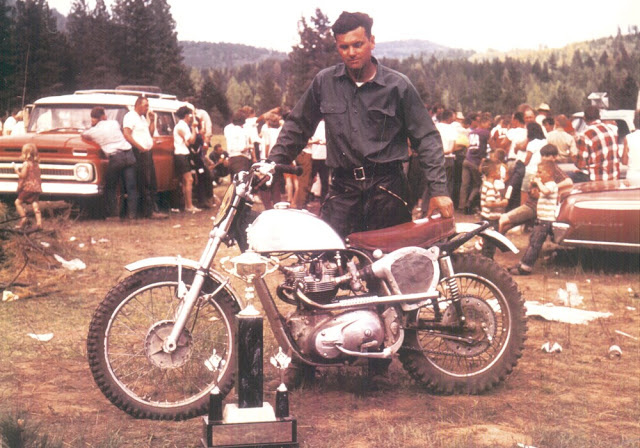 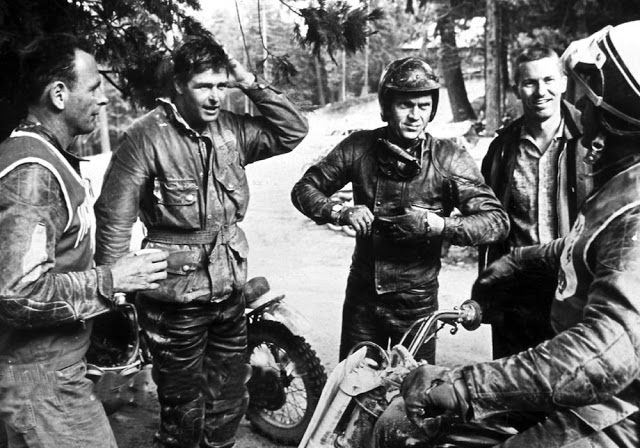 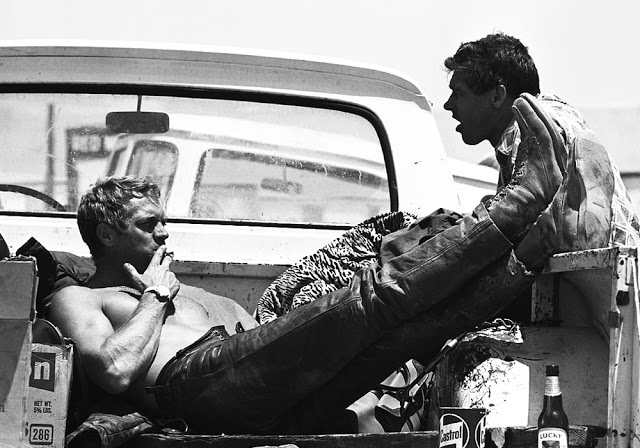 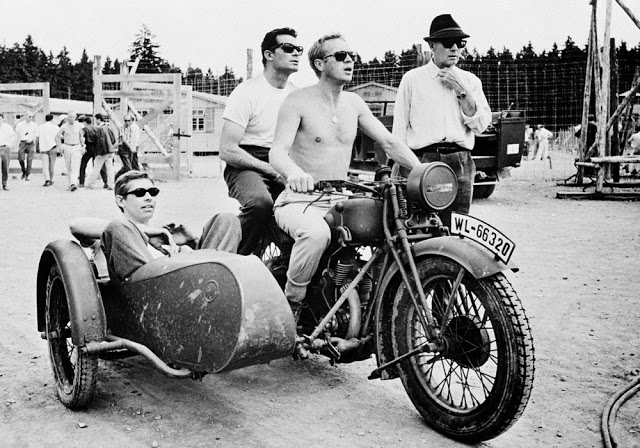 “Tim and I went out early one Sunday with the 650 Triumph we were using that was supposed to be a side-valve Wehrmacht BMW,” Bud recalled. “We laid out the fence a couple of feet high. Then we dug a ramp out with shovels, about nine or ten feet long, and I hit the ramp in third gear at about 50mph and cleared the fence. We dug it out a little more and raised the fence to eight feet and I cleared that too. Then I hit the ramp at 60mph in fourth and jumped 12 feet high and 65 feet down. Then I said to Sturgis: ‘Okay, let’sdo it!’”

“When I took off, I throttled right back and it was silent,” Bud said. “You know, everything was just silent- the whole crew and everything was just silent. And then when I landed they cheered like crazy. They did just onetake and afterwards the assistant director came to me and said, ‘Well, that’s a $1,000.00 jump if I ever saw one.’ I knew nothing about negotiating fees so I said ‘okay’ and that was that. Two days’ work, one jump, and we were finished.”

Not only did McQueen perform his own stunts during filming, but he also performed stunts for the films stuntmen themselves.

Before moving to California to pursue a career as an actor, McQueen got his start in the 1950s as a professional motorcycle racer in Long Island, NY. Due to his skill on a bike, during filming he kept outrunning the less skilled stuntmen who were supposed to be chasing him. As a result, McQueen did his own riding as Virgil and then dressed as a German soldier and shot separate chase scenes. Thusly, all of the motorcycle scenes in The Great Escape effectively show McQueen chasing himself. 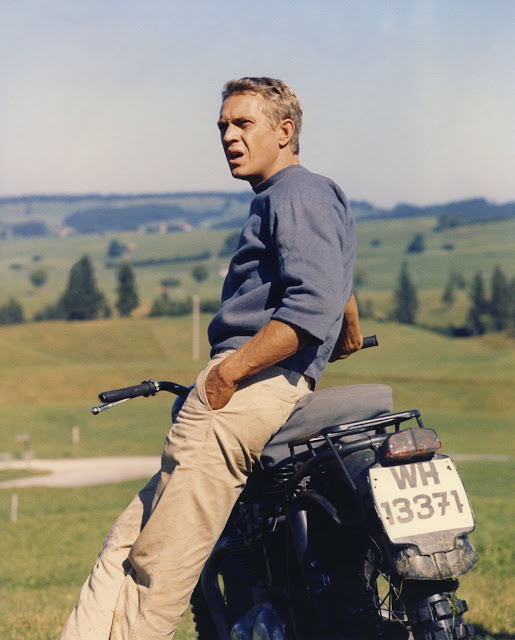 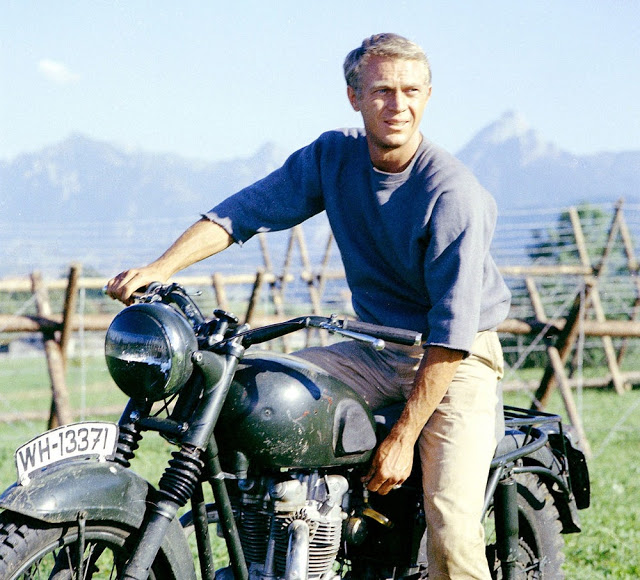 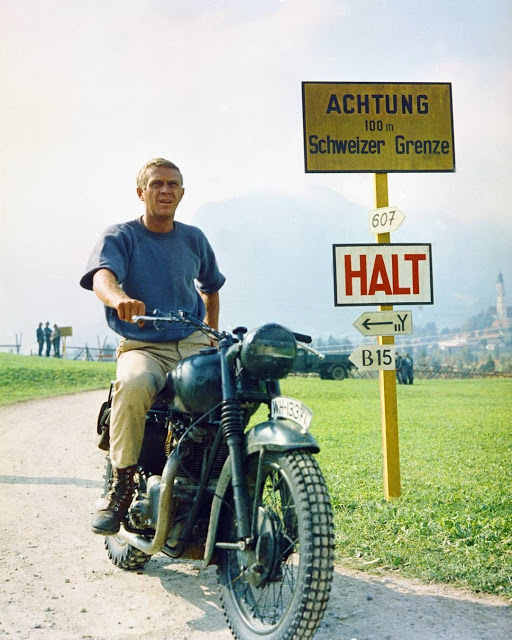 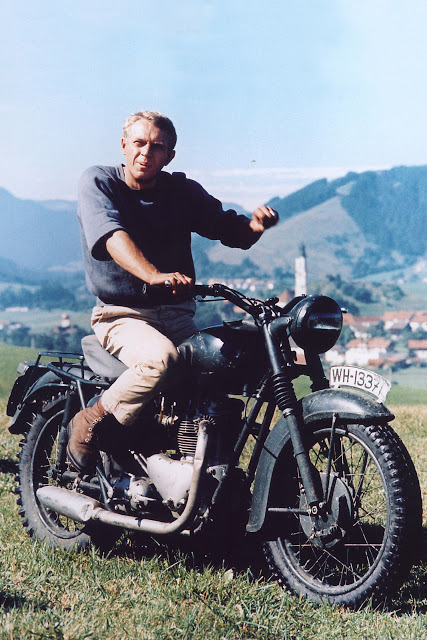 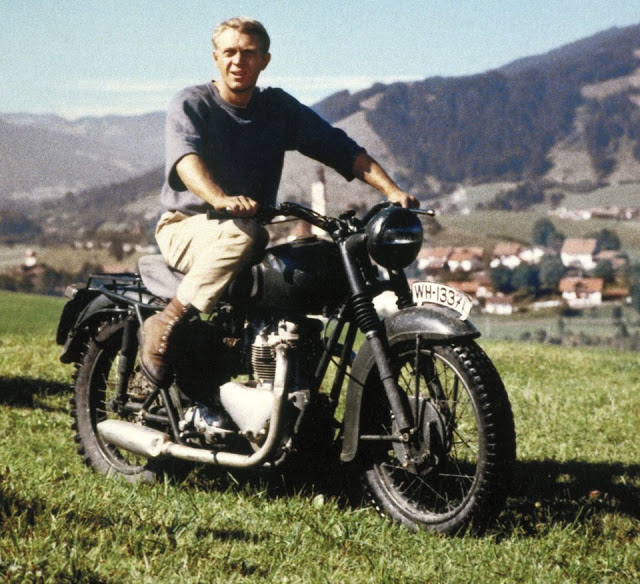 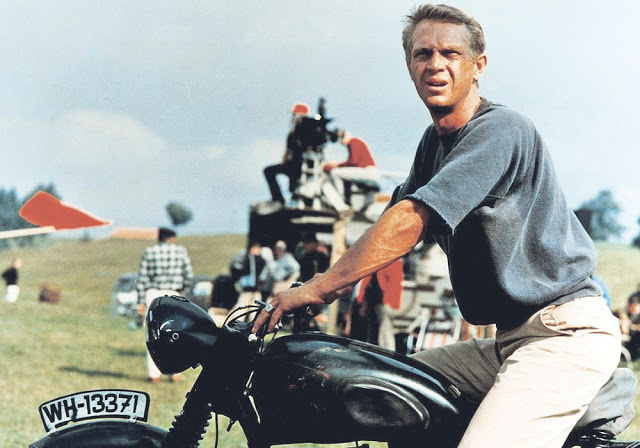 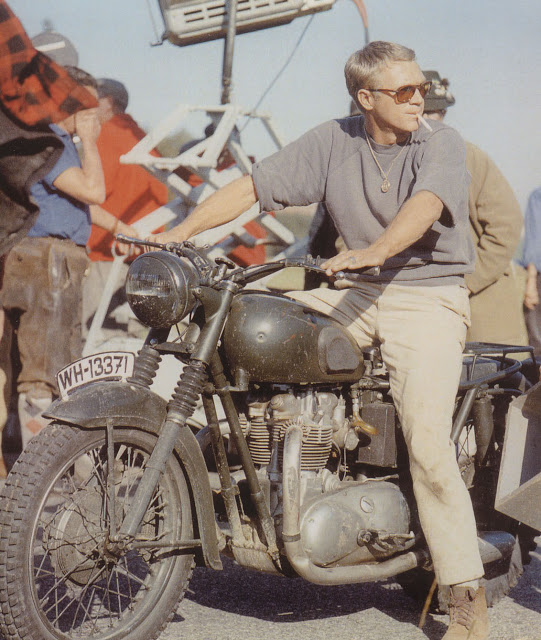 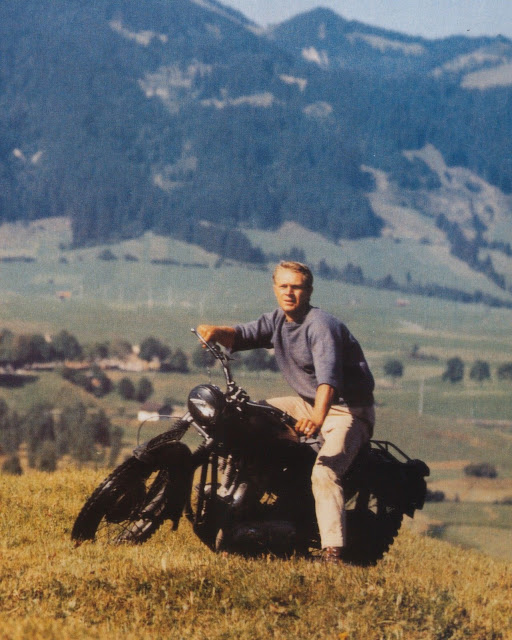 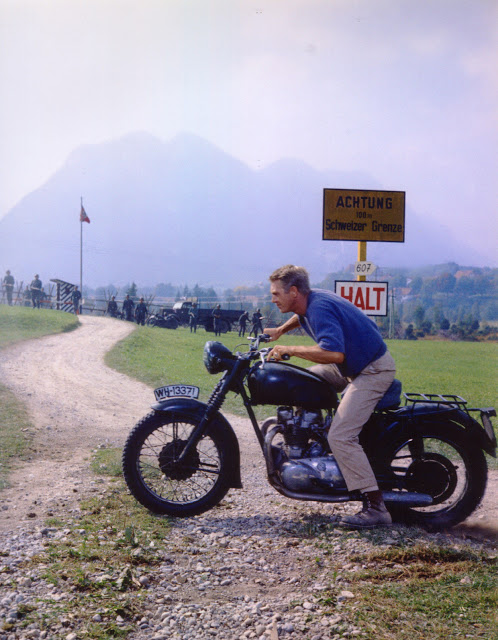 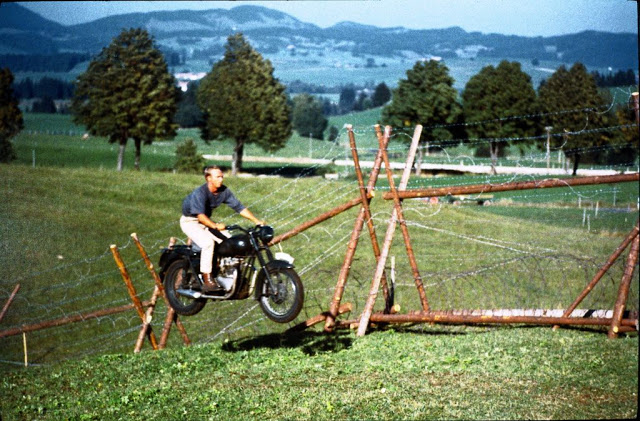 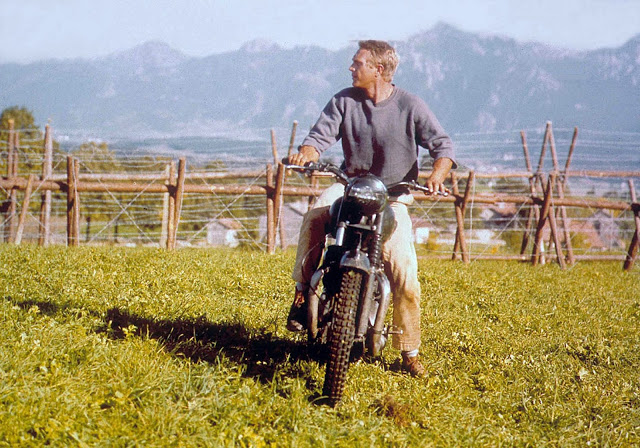 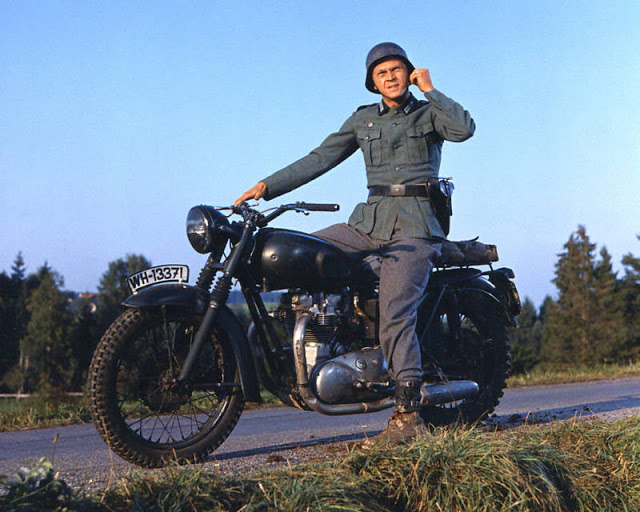 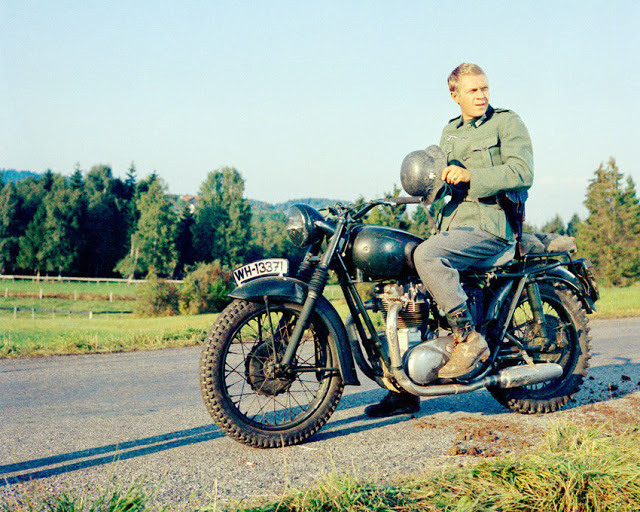