Here’s a scan of a Volkswagen advertisement from 1963. The ad features a grid of black and white photos of the VW Beetle from 1949 to 1963 in order to highlight how little the Beetle’s design changed during that period. The ad is titled “The Volkswagen Theory of Evolution.”

Can you spot the Volkswagen with the fins? Or the one that’s bigger? Or smaller? Let’s see. 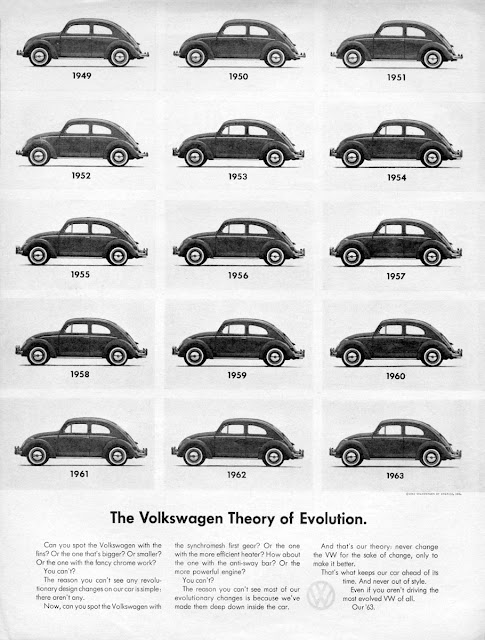 Adman Bill Bernbach played off a growing discontent with planned obsolescence by advertising the VW Beetle as cool in its anti-style; the models never changed.

According to National Museum of American History, in the late 1950s Volkswagen differentiated itself from American competitors by highlighting how little its cars’ designs changed. One of the company’s advertisements from 1959 assured customers that, although the Volkswagen Beetle “changes continually throughout each year… none of these changes you merely see. We do not believe in planned obsolescence. We don’t change a car for the sake of change… VW owners keep their cars year after year, secure in the knowledge that their used VW is worth almost as much as a new one.” Volkswagen’s promise seems to have appealed to American consumers; by 1970, Americans had bought over four million of the company’s cars.