Stunning photos of the US Army during the War in the Pacific have been brought to life through vivid colorization. The breathtaking images capture the perils of war, from men being stretchered away to hospital to soldiers fighting at Okinawa.

From December 1941 to September 1945, war raged on across Asia and the Pacific. The conflict, which led to around 36 million casualties, was a turning point in World War II. The unexpected Japanese air strike on Pearl Harbor in December 1941 triggered the USA’s involvement in the Second World War.

On December 8, America declared war on Japan, along with the other Allied nations.

Royston Leonard, from Cardiff, Wales, is the man who brought these photos to life. “The Japanese code was to not surrender and to fight to the death which was their way to die in battle with honour, almost no prisoners were taken unless they were badly injured and could no longer fight,” he said. “I’ve seen a lot of photos of the European war in color but almost nothing from the Pacific War.” 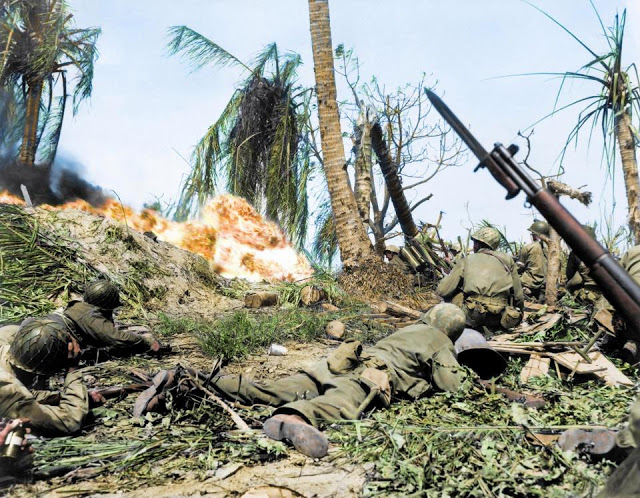 US soldiers of the 7th Infantry Division attacking a Japanese blockhouse on Kwajalein in the Marshall Islands in 1944. The troops began capturing the islands by landing their forces on the beaches. U.S. Marines firing an M1919 Browning machine gun during the fighting on the island of Peleliu. These .30 caliber weapons were typically used during World War II. 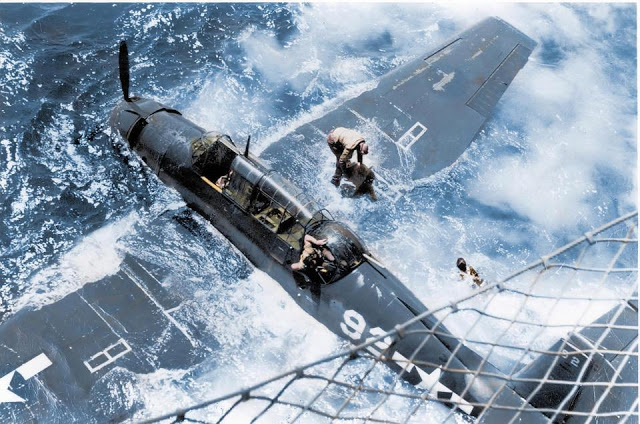 An Avenger aircraft from the squadron VT-26, after engine failure and a catapult mishap on board the aircraft carrier USS Bataan CVE-29. March 13, 1944. 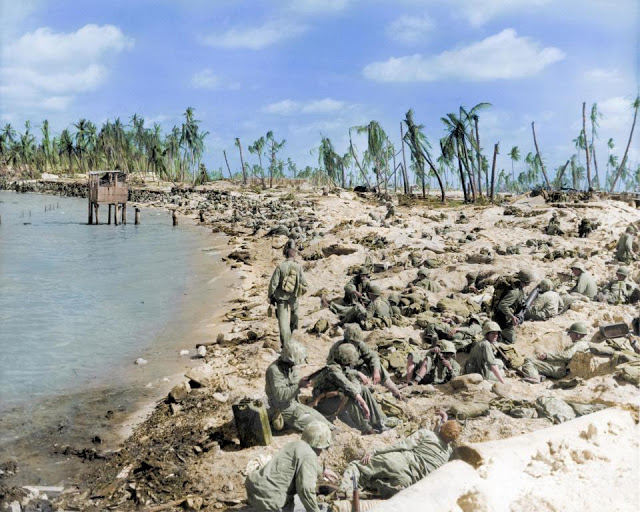 US marines huddled on the beaches during the Battle of Tarawa in World War Two, Kiribati, 1943. There were around 4,600 fatalities recorded following the bloody battle. 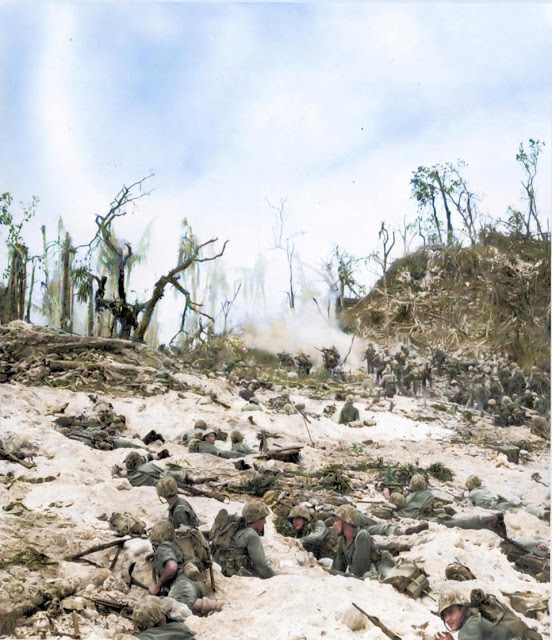 Men of the US 1st Marine Division fighting just beyond White Beach, Peleliu in September 1944. 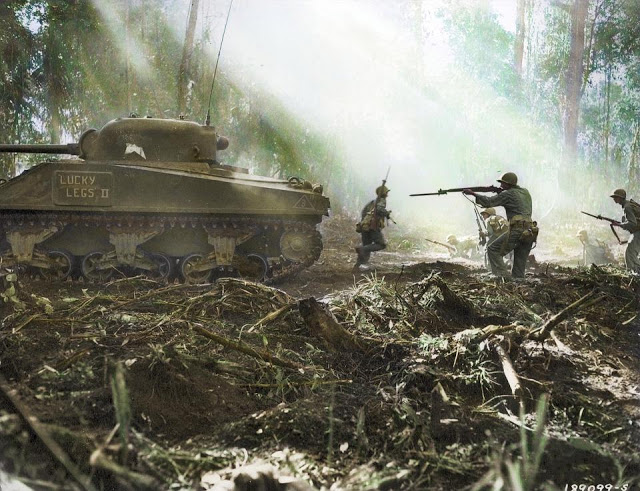 U.S. Army soldiers on Bougainville, an island in Papua New Guinea, taking cover behind an M4 Sherman tank in February 1943. 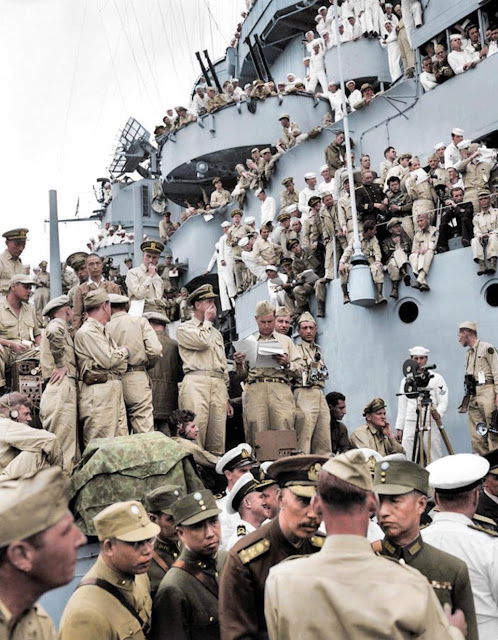 Spectators from all over the world pick vantage positions on the deck of the USS Missouri, in Tokyo Bay in September 1945, to watch the Japanese surrender ceremony marking the end of World War II. 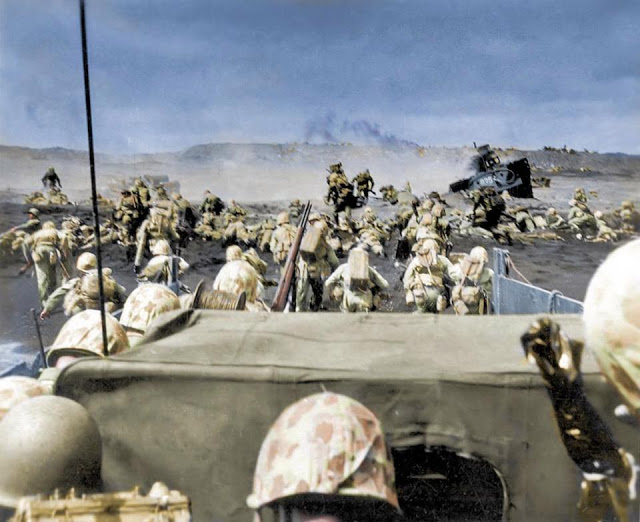 US troops make their first strike on the Japanese Home Islands at Iwo Jima in 1945. The battle lasted for five weeks and contained some of the most bloody and brutal fighting of the whole war. 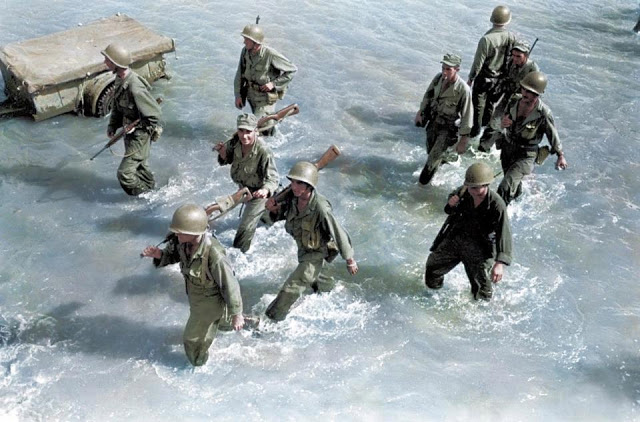 US 1st Cavalry Division crossing the Pasig River, Manilla in February 1945. Around 41,500 US troops were declared missing or dead during the Pacific War. Captured wounded Japanese soldier surrounded by Marines on Kwajalein Atoll, Marshall Islands. During World War II, it's estimated that between 19,500 and 50,000 members of the Imperial Japanese military surrendered to the Allies. 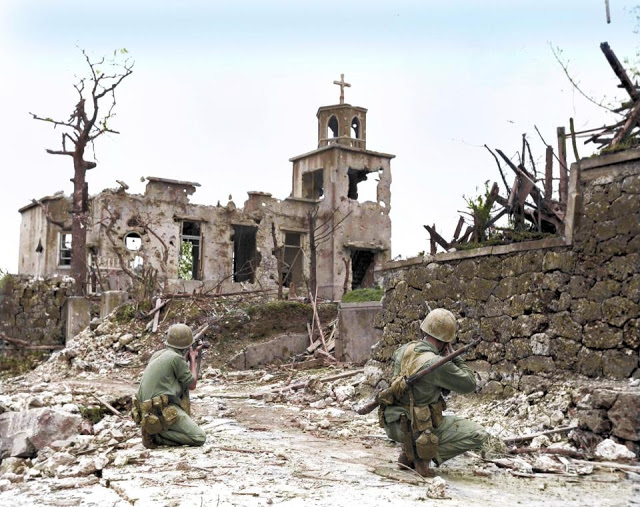 While a patrol moves in from the rear, two United States Marines cover a Japanese sniper hiding in a church, below Shuri Castle on Okinawa, 1945. 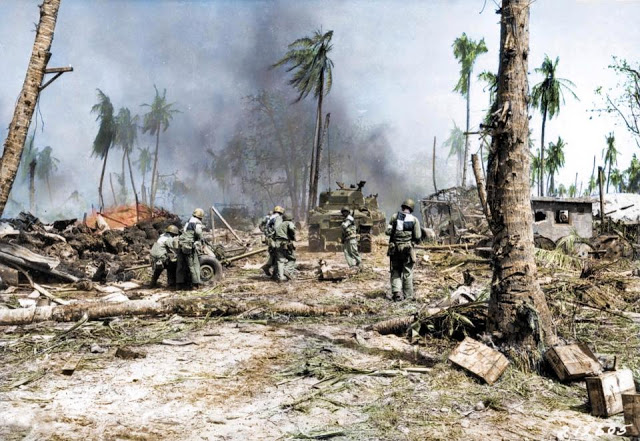 Soldiers make their way across the barren landscape in Kwajalein, Marshall Islands, 1944. 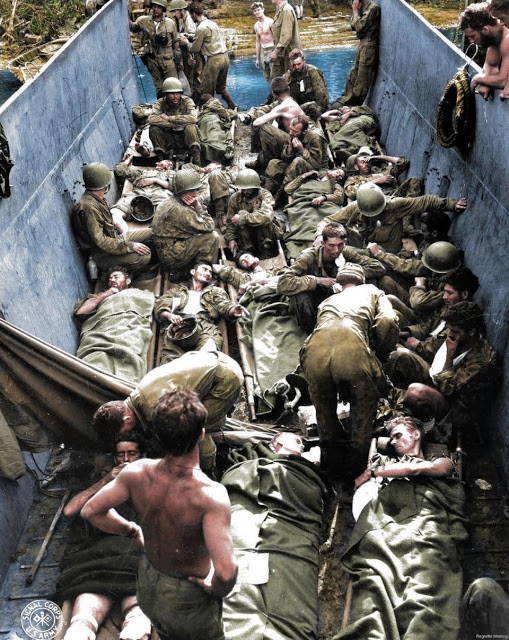 Wounded troops lying on stretchers aboard a lighter in Munda Point, New Georgia. There were more than 36 million casualties during the War in the Pacific. 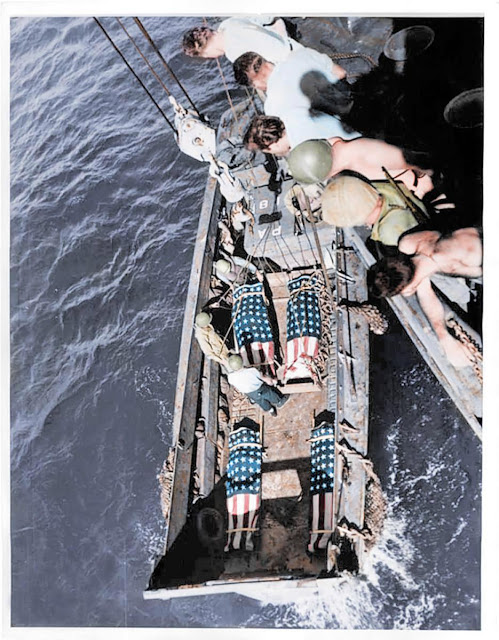 Deceased US soldiers are wrapped in their national flag and carefully lowered down onto a ship by comrades ready for burial. 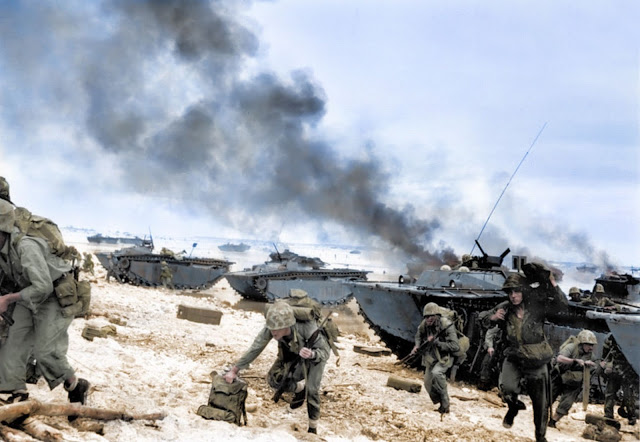 US Marines under heavy fire from enemy Japanese positions during the beginning of the Battle of Peleliu in 1944. 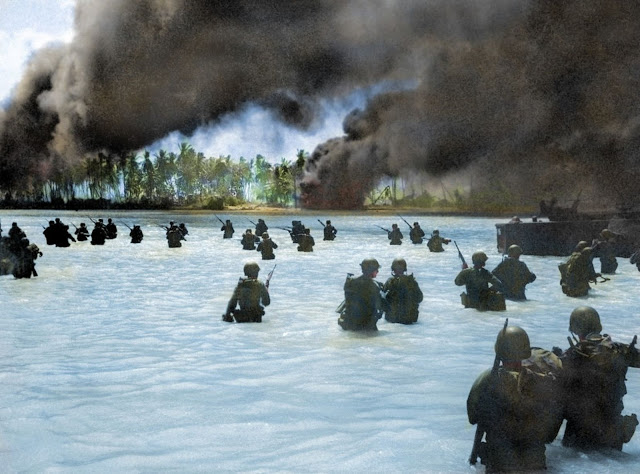 Men wade through the water near Butaritari Beach, Makin Atoll in November 1943. 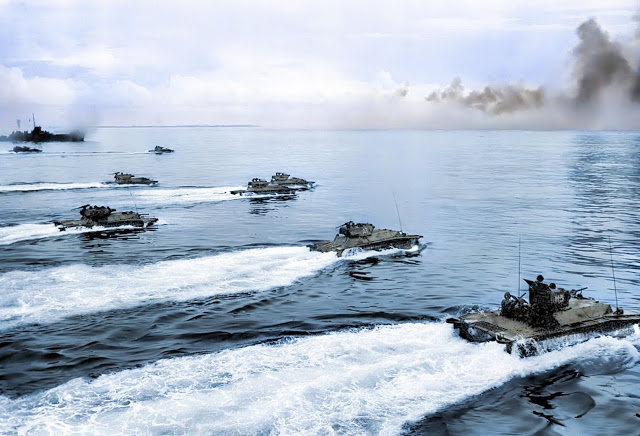 Alligator landing vehicles heading toward defences on Peleliu in September 1944. 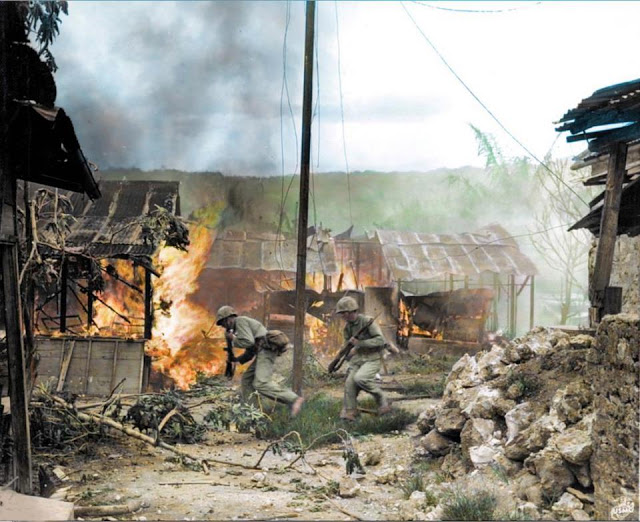 This picture was taken during The Battle of Saipan, where the Allied invasion fleet left Pearl Harbor in 1944. Tragically, 30,000 troops and Japanese civilians were declared dead following the conflict. 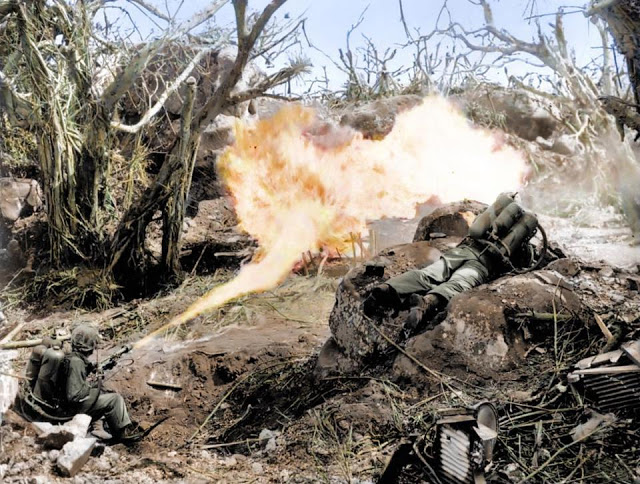 Marines torch a Japanese defensive in Iwo Jima’s Mount Suribachi by using flamethrowers in 1945. These military tools were an effective weapon for burning out entrenched fighters who would have otherwise continued to fight, costing more lives. Pictured are Pvt. Richard Klatt and PFC Wilfred Voegeli. 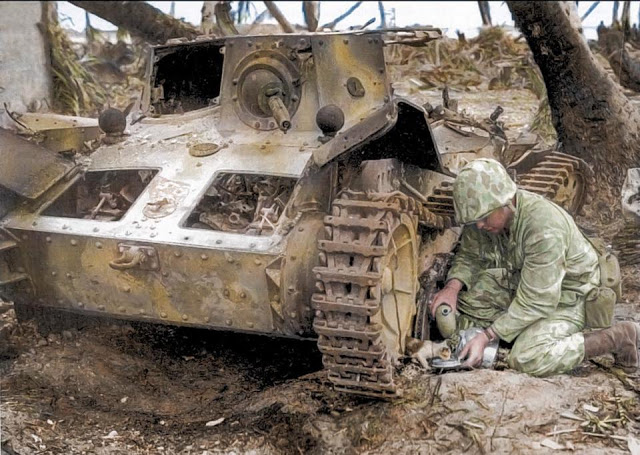 A U.S. Marine shares his water bottle with a stray kitten found under a burned-out Japanese tank on Tarawa in 1943. Survivors of USS Indianapolis en route to hospital after being rescued in August 1945. After the sailor's ship was sank by Japanese tornadoes, sharks swarmed the survivors in the wreckage. 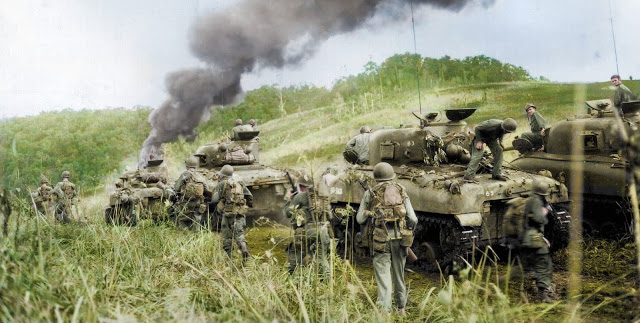 Troops and their tanks in New Guinea in April 1944. 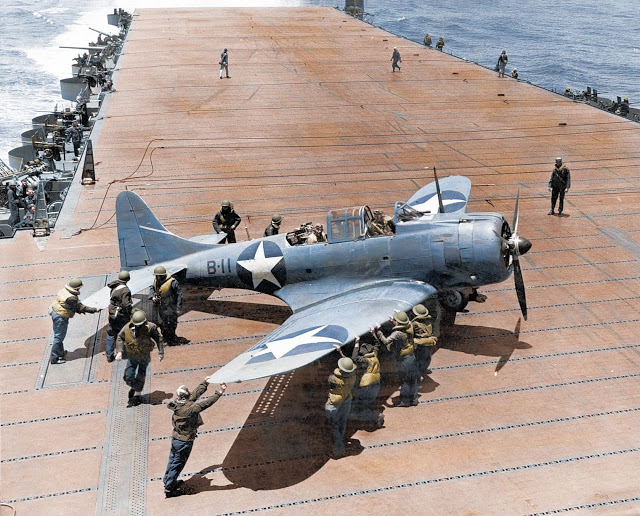 A US Navy Douglas SBD-3 Dauntless of bombing squadron VB-8 on the deck of the aircraft carrier USS Hornet (CV-8) during the Battle of Midway in 1942. 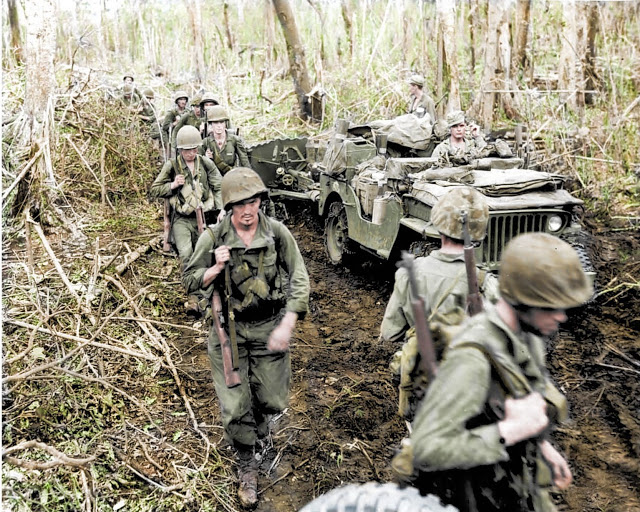 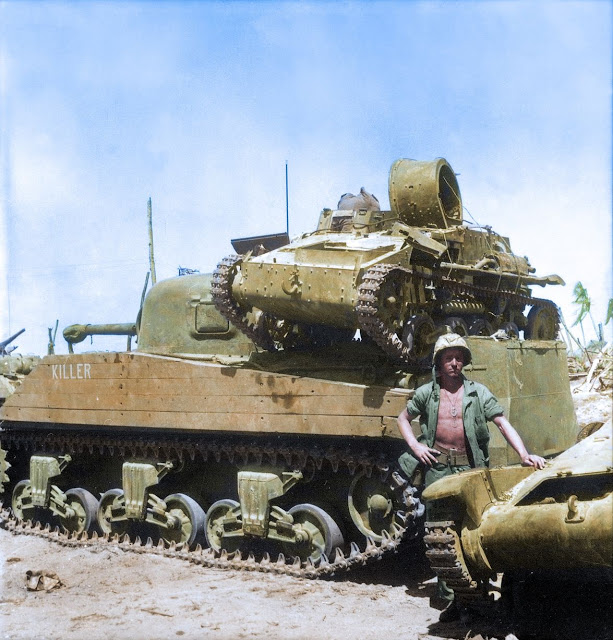 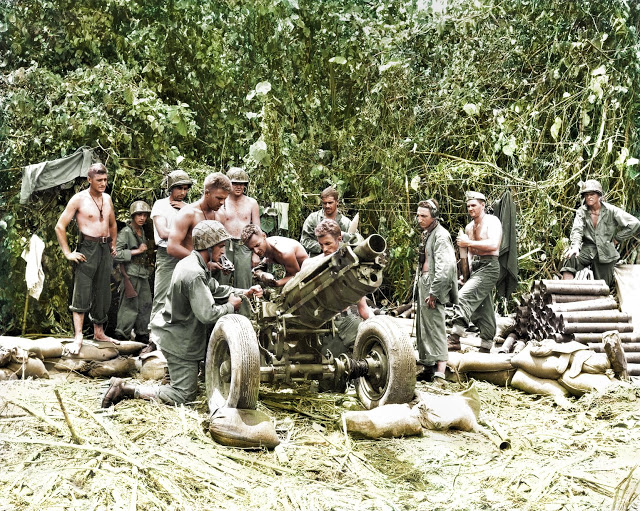 Marines from the H Battery, 3rd Battalion set up artillery in the Solomon Islands just off Blue Beach 2. 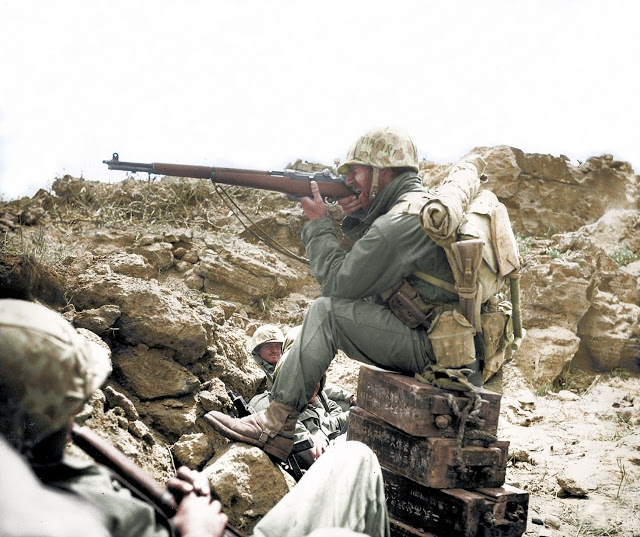 A US marine takes aim while sitting on Japanese ammunition boxes. 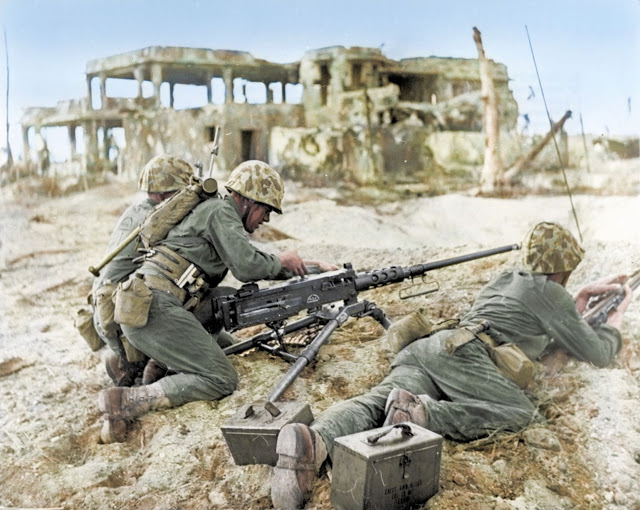 US Marines on the beach of Namur Islet, Kwajalein Atoll. 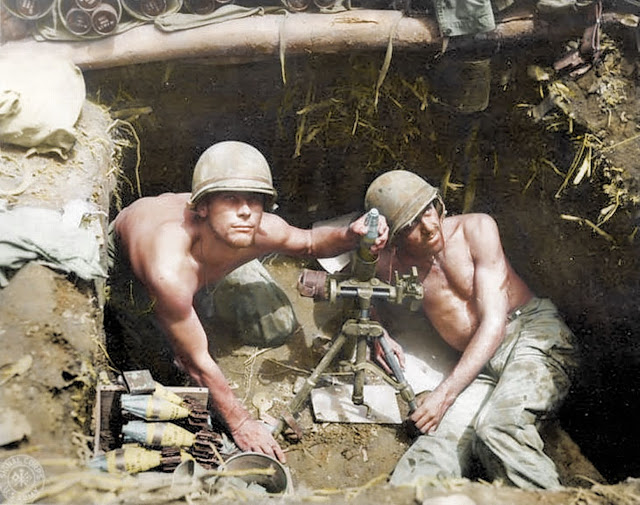 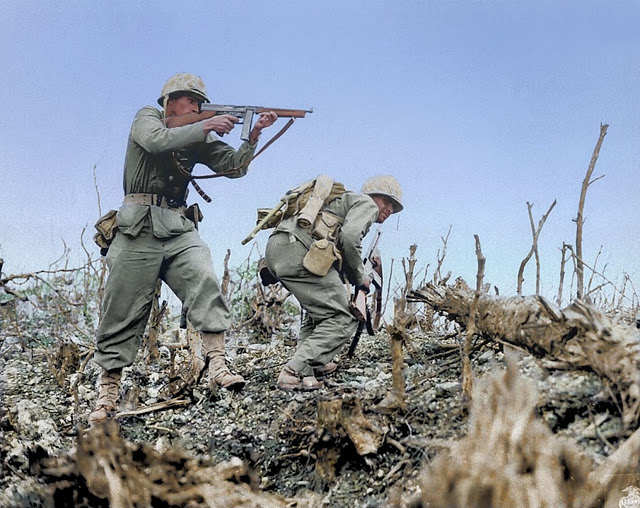 Two Marines from the 2nd Battalion, 1st Marine Regiment during fighting at Wana Ridge during the Battle of Okinawa, May 1945.

Posted by Yesterday Today at 10:03 AM