Before and After Photo Comparisons of Lobotomy Patients

Today, the word “lobotomy” is rarely mentioned. If it is, it’s usually the butt of a joke. But in the 20th century, a lobotomy became a legitimate alternative treatment for serious mental illness, such as schizophrenia and severe depression. Physicians even used it to treat chronic or severe pain and backaches. There’s a surprising history of the lobotomy for its use in mental health.

Lobotomy (from the Greek lobos, meaning lobes of the brain, and tomos, meaning cut) is a psychosurgical procedure in which the connections the prefrontal cortex and underlying structures are severed, or the frontal cortical tissue is destroyed, the theory being that this leads to the uncoupling of the brain’s emotional centers and the seat of intellect (in the subcortical structures and the frontal cortex, respectively).

The lobotomy was first performed on humans in the 1890s. About half a century later, it was being touted by some as a miracle cure for mental illness, and its use became widespread; during its heyday in the 1940s and ’50s, the lobotomy was performed on some 40,000 patients in the United States, and on around 10,000 in Western Europe. The procedure became popular because there was no alternative, and because it was seen to alleviate several social crises: overcrowding in psychiatric institutions, and the increasing cost of caring for mentally ill patients.

An excellent account of the effects of lobotomy, and of the ethical implications of the use of the procedure, can be found in Ken Kesey’s book One Flew Over the Cuckoo’s Nest. (This was made into a film in 1975, by Milos Forman, who received the Academy Award for Best Director. Jack Nicholson won the award for Best Actor in a Lead Role.)

The use of lobotomies began to decline in the mid- to late-1950s, for several reasons. Firstly, although there had always been critics of the technique, opposition to its use became very fierce. Secondly, and most importantly, phenothiazine-based neuroleptic (anti-psychotic) drugs, such as chlorpromazine, became widely available. These had much the same effect as psychosurgery gone wrong; thus, the surgical method was quickly superseded by the chemical lobotomy. 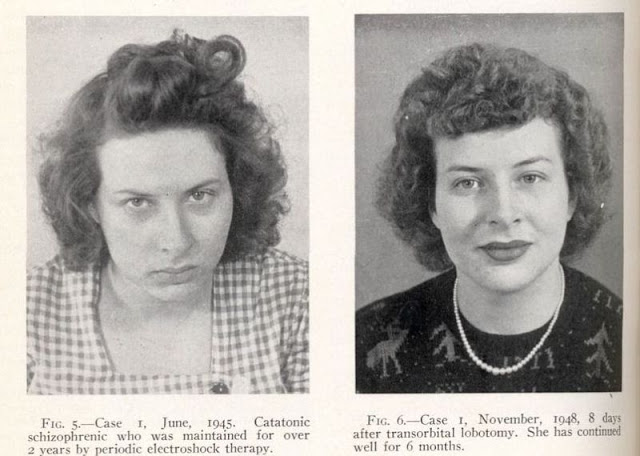 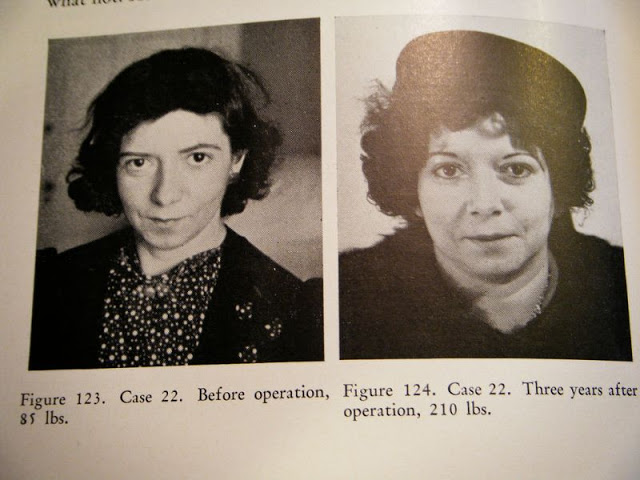 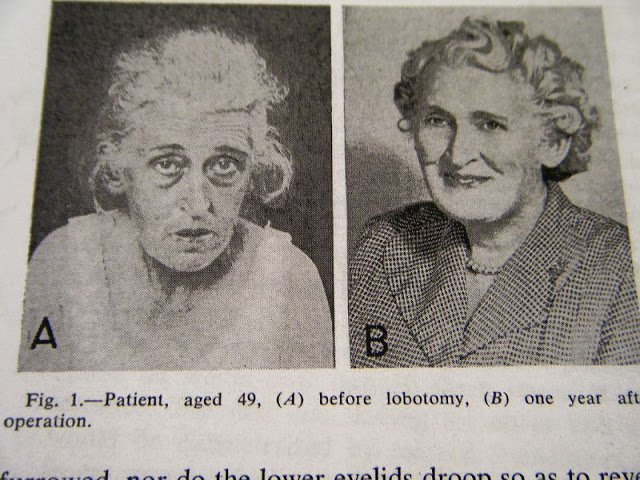 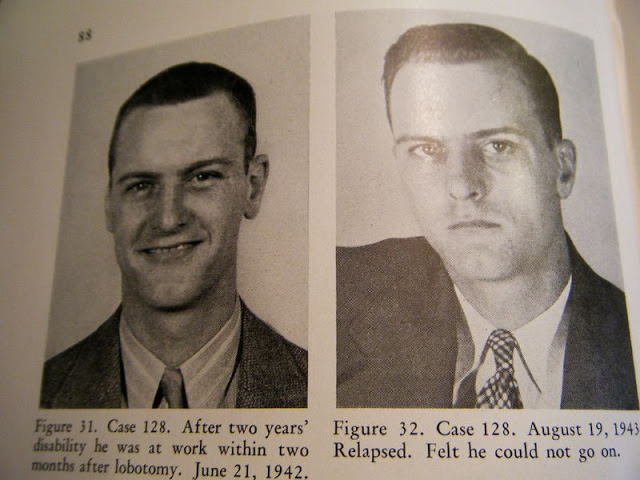 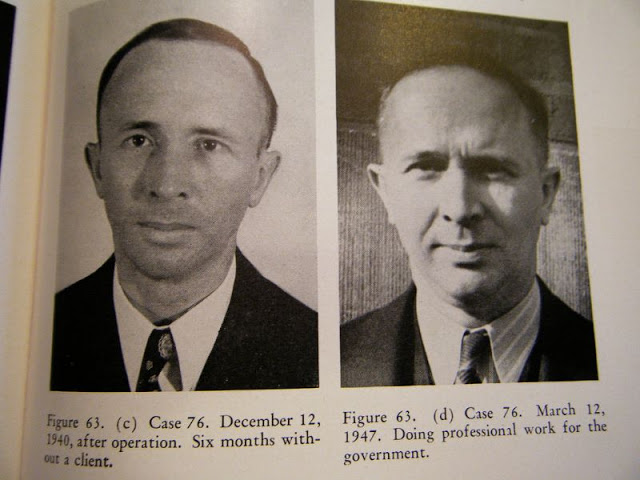 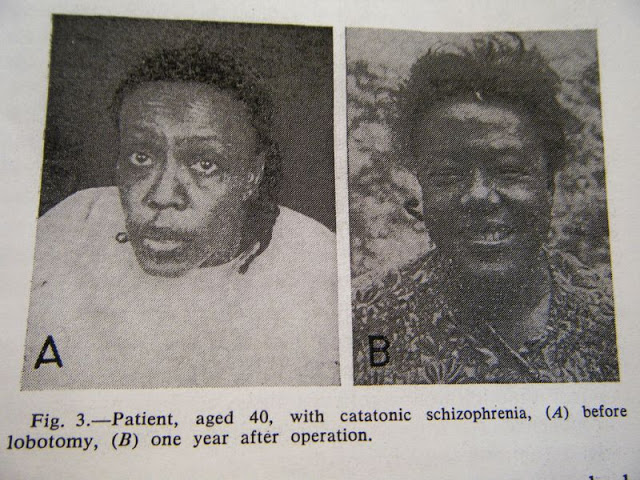 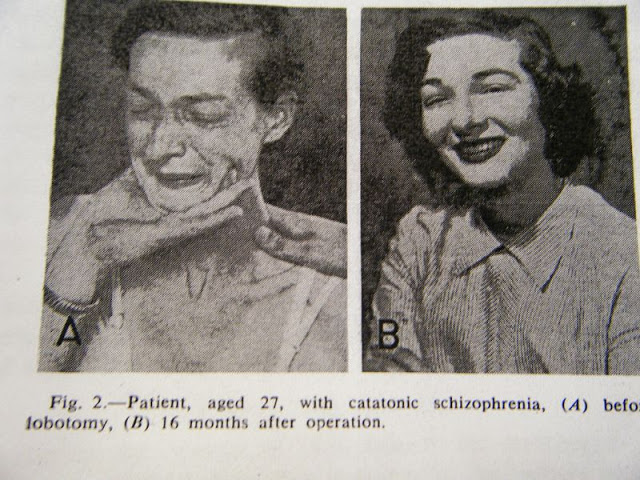 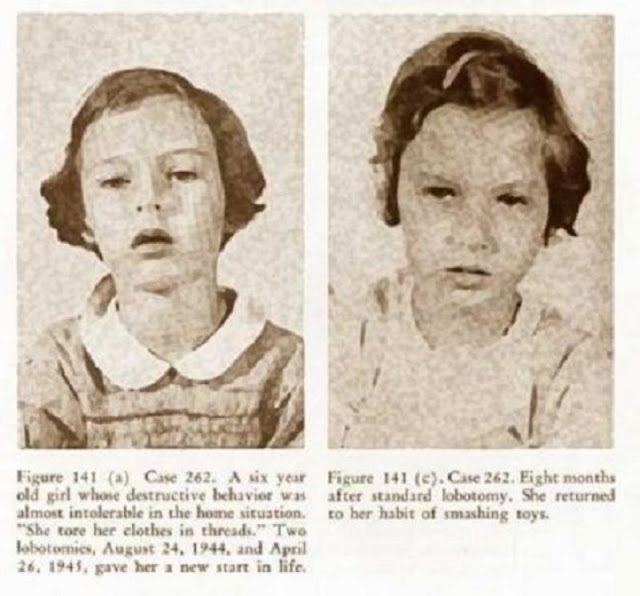 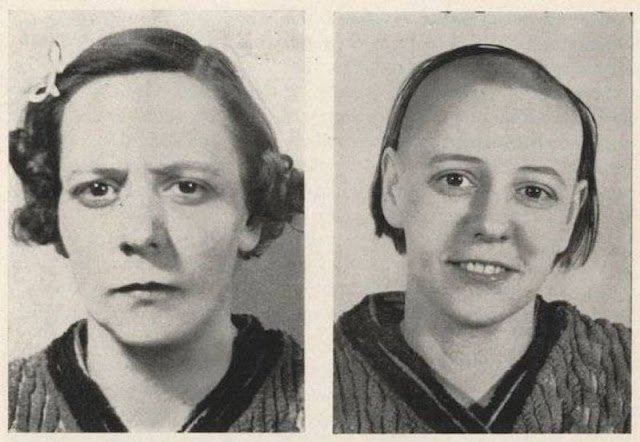 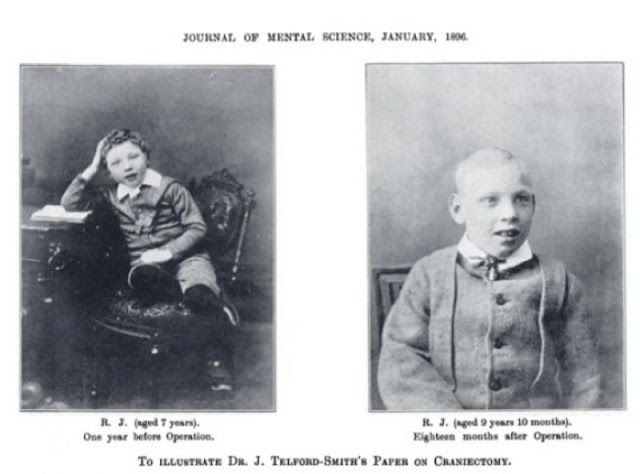 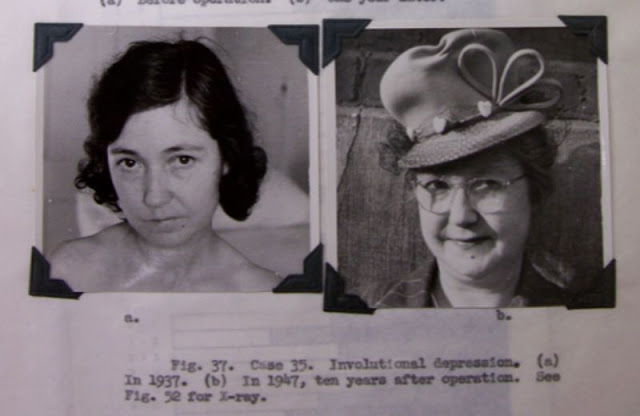 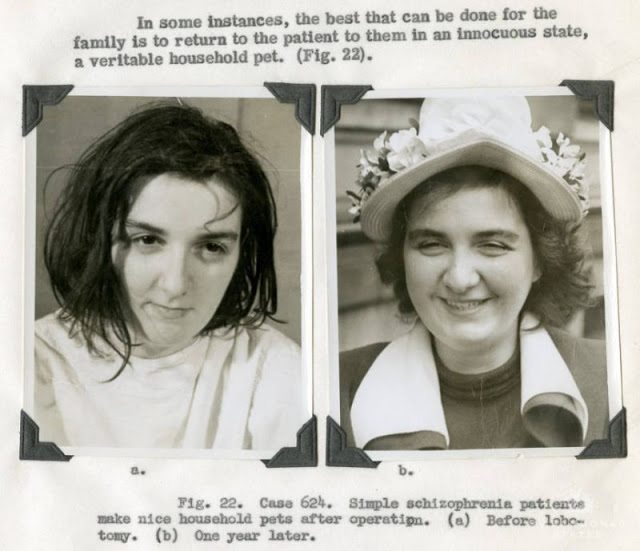 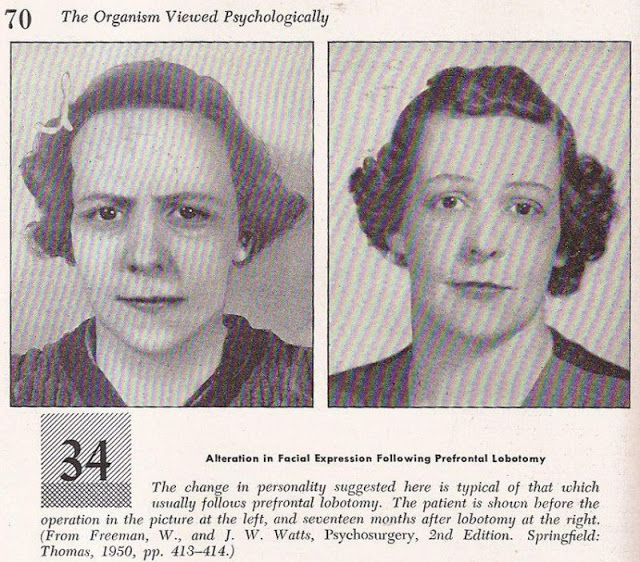 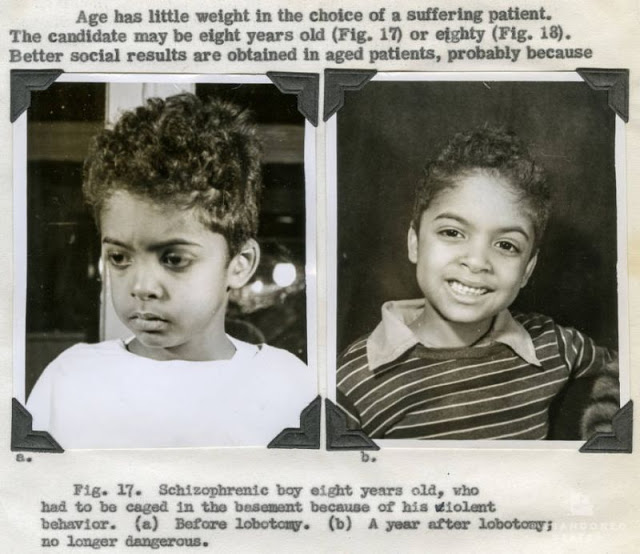 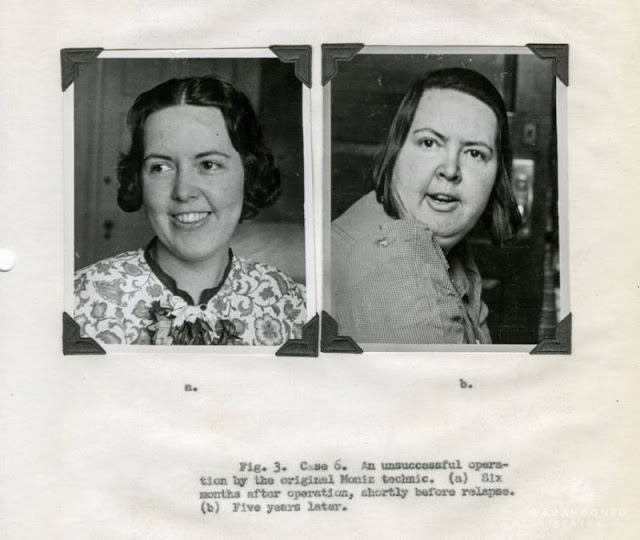 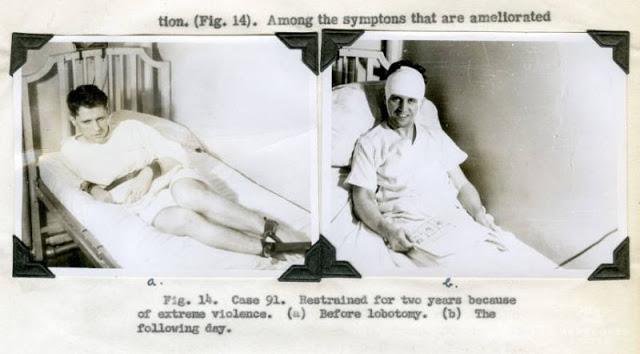 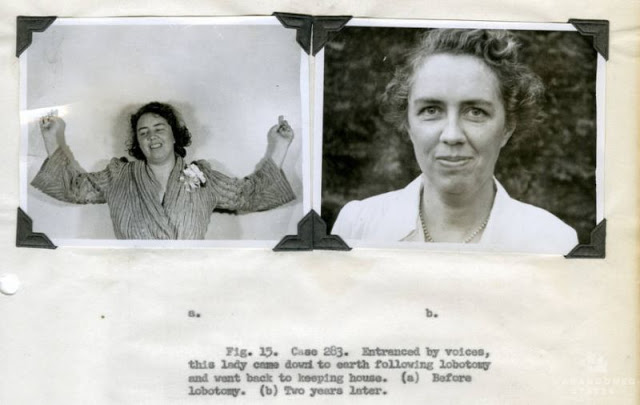 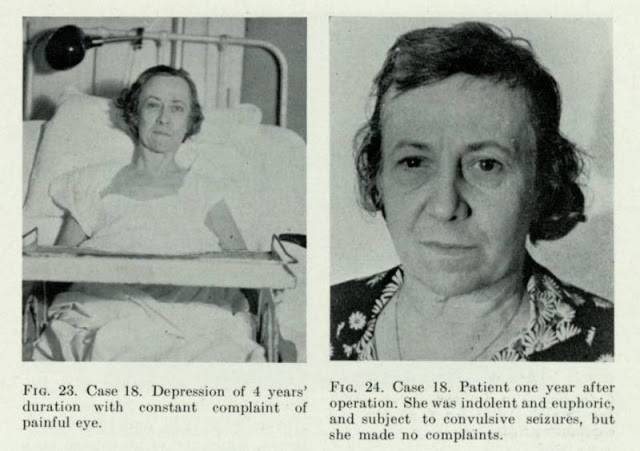 Posted by Yesterday Today at 2:03 PM