Execution by Cannon in Shiraz, Iran From the Mid-Late 19th Century

Execution by cannon was a method of execution in which the victim was typically tied to the mouth of a cannon which was then fired. The prisoner is generally tied to a gun with the upper part of the small of his back resting against the muzzle. When the gun is fired, his head is seen to go straight up into the air some forty or fifty feet; the arms fly off right and left, high up in the air, and fall at, perhaps, a hundred yards distance; the legs drop to the ground beneath the muzzle of the gun; and the body is literally blown away altogether, not a vestige being seen. 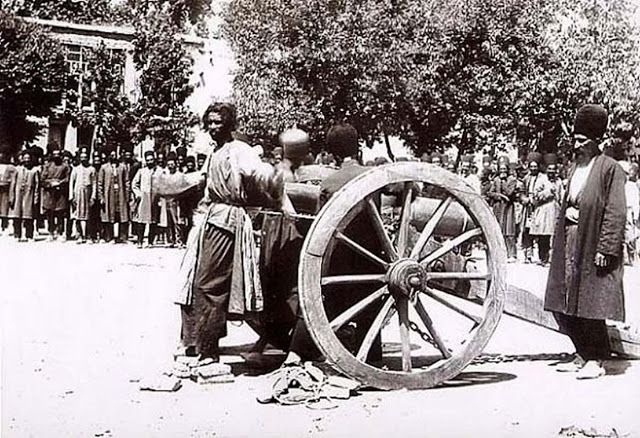 Blowing from a gun was a reported means of execution as long ago as the 16th century, by the Mughal Empire, and was used until the 20th century. The method was utilized by Portuguese colonialists in the 16th and 17th centuries, from as early as 1509 across their empire from Ceylon (modern day Sri Lanka) to Mozambique to Brazil. The Mughals used the method throughout the 17th century and into the 18th, particularly against rebels.

This method of execution is most closely associated with the colonial government of the British Raj. Following the Indian Rebellion of 1857, "blowing from a gun" was a method the British used to execute rebels as well as for those natives found guilty of desertion. Using the methods previously practised by the Mughals, the British began implementing blowing from guns in the latter half of the 18th century.

The destroying of the body and scattering the remains over a wide area had a particular religious function as a means of execution in the Indian subcontinent as it effectively prevented the necessary funeral rites of Muslims and Hindus. Thus, for believers the punishment was extended beyond death. This was well understood by foreign occupiers and the practice was not generally employed by them as concurrent foreign-occupiers of Africa, Australasia or the Americas.

Most recently there was an exceptional use of the practice in Afghanistan in 1930, against 11 Panjshiri rebels.