Fearful 16-Year-Old German Soldier Crying Tears of Defeat, After Being Captured by the US 9th Army in Germany, 1945

A sixteen-year old German anti aircraft soldier of the Hitler Youth, Hans-Georg Henke, taken prisoner in the state of Hessen, Germany. He was a member of the Luftwaffe anti-air squad who burst into tears as his world crumbled around him. His father died in 1938 but when his mother died in 1944 leaving the family destitute, Hans-Georg had to find work in order to support the family. At 15 years of age he joined the Luftwaffe. 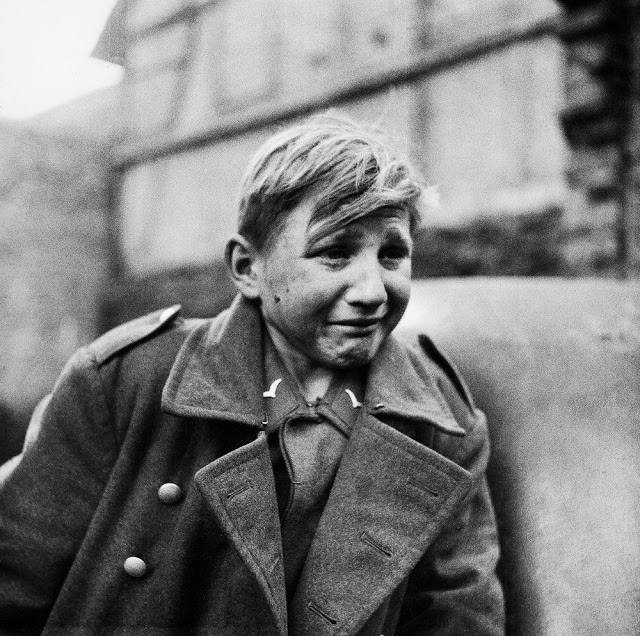 As a son of a former Communist sympathiser, Hans-Georg himself joined the Communist party and went to live in Finstewald in East Germany after the war. Unlike the hordes that crossed from East to West Germany during the period before the erection of the Berlin Wall, Hans-Georg did the exact opposite. Perhaps it is for this reason that he changed the story of why he was crying so inconsolably in these photographs.

According to the story that Henke maintained throughout his life – he died in 1997 – he was based in Stettin with a battery of 88mm guns. As the Russians advanced so the German forces were pushed back towards Rostock. It was here where the Russians finally overran their unit, that these photographs were taken. 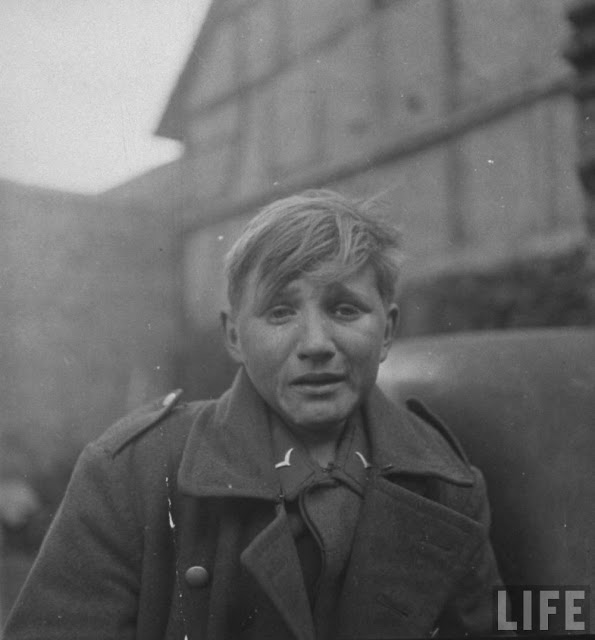 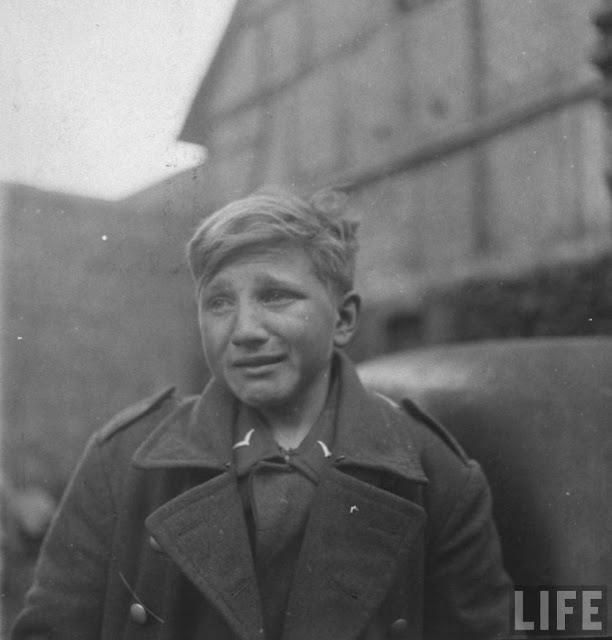 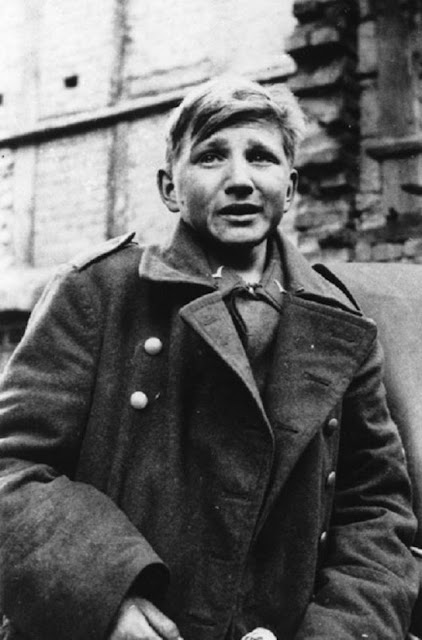 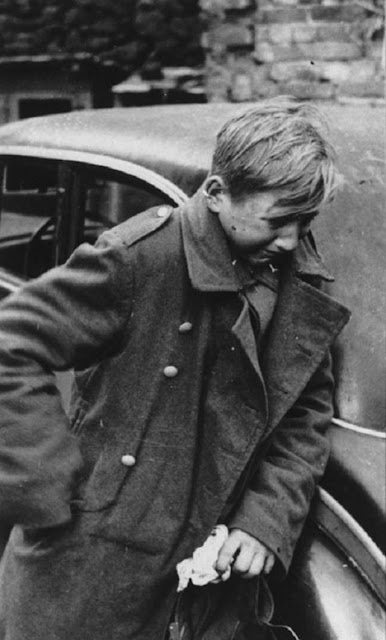 The alternative story is given by an American photo-journalist John Florea. He alleges that he took these photographs in Hessen, in the village of Hüttenberg-Rechtenbach, which is just north of Frankfurt am Main.

The area in which the photos of Hans-Georg were taken is incontrovertibly Hessen. A number of photos taken clearly show areas of the town which still exist today. Furthermore as these photos indicate, he was bearing boots when captured and not, as he alleged later, with rags on his feet. 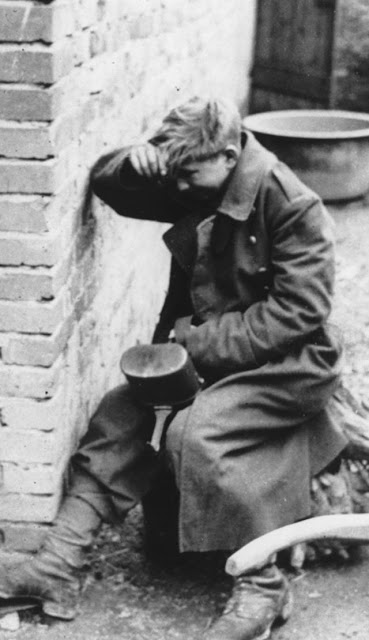 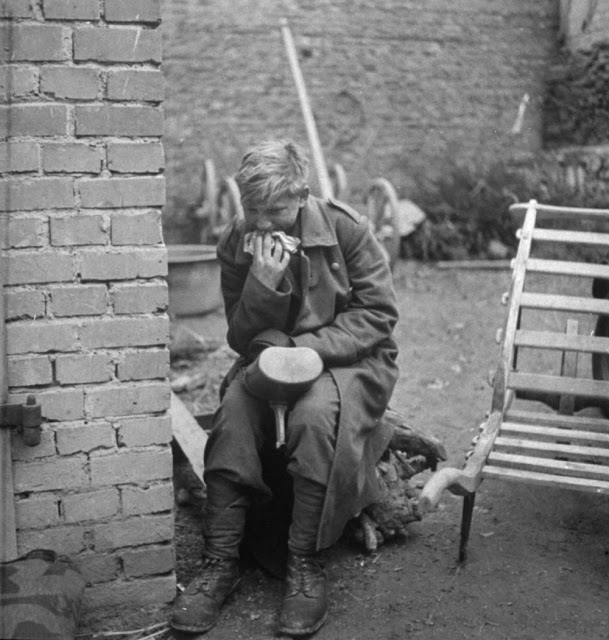 On another aspect there is also a difference of opinion. John Florea is adamant that Hans-Georg is not sobbing because his world had crumbled but rather due to combat shock after being overrun by the American forces.

The sole motive for Henke dissembling on this issue must relate to the fact that he elected to join the Communist Party and live in East Germany. The East German Communists regarded all those who had surrendered to the Americans as a potential third force. To cover his tracks, Henke changed the story from being overrun by Americans to being captured by the Russians. 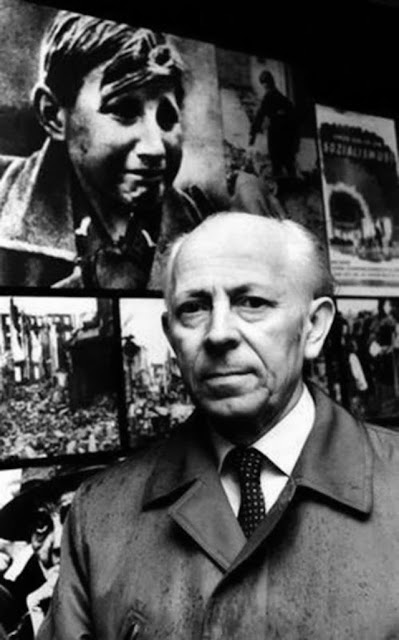 Hans-Georg Henke during an interview with the Western Press at which he presented a conflicting account of the events that led to this episode.

Notwithstanding that, these photographs have been used extensively to illustrate the effect of the world crumbling around the German populace.

The effect of the defeat on a normal youth like Hans-Georg was probably initially worse and that of a member of the Hitler Jugend but probably many members of the Hitler Youth would have been deeply embittered for the rest of their lives.

Hence they would have found it difficult to come to terms with Germany’s collapse and defeat.

Posted by Yesterday Today at 10:06 AM