How the Original Selfie Stick Was Invented in the 1980s

Before the word “selfie” was even coined, let alone in the dictionary. The first selfie stick was neither as elegant nor as successful as the latest models. The original patent was filed all the way back in 1983, before cell phones were ubiquitous.

The first selfie stick was invented by Hiroshi Ueda, at the time he worked for the Minolta camera company, and was a keen photographer. “Whenever I went overseas I took my camera with me and took loads of photos,” he told BBC.

But while traveling in Europe he encountered a problem. He was keen to get pictures of himself and his wife together - but passers-by couldn’t always be trusted.

“When I was in the Louvre Museum in Paris, I asked a child to take a photo of us, but when I stepped away, the child ran away with my camera,” he said.

After being frustrated with the photo skills of passers-by ruining his vacation memories — remember, this is in the days of film photography — Ueda decided to use his engineering skills to take things in his own hands, literally.

He ended up creating an “extender stick,” which was a metal, extendable stick with a tripod screw on which he mounted a compact camera with a mirror attached to the front.

The photo above shows Ueda holding his invention, and here’s one of the early photos he captured with his early selfie stick: 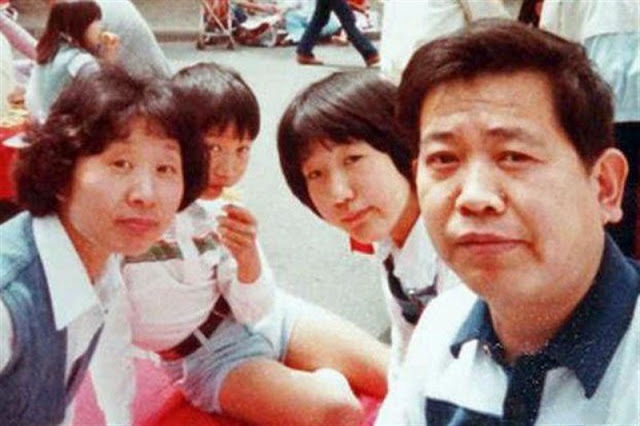 Ueda filed a patent for the invention in 1983, and it was published by the US patent office in 1985. The document was titled “Telescopic extender for supporting compact camera.” Here’s what the description said:
“A telescopic extender for supporting a compact camera includes a head member to be attached to the camera, a grip to be held and a telescopic rod member connecting the head member to the grip. A screw member is supported by the head member in a manner that the screw member is rotatable about the axis perpendicular to an extending and collapsing direction of the telescopic rod. The grip can accomodate therein the telescopic rod when the telescopic rod is completely collapsed.”
Unfortunately for Ueda, this original idea never took off. Although Minolta did bring the device to market, it didn’t have many sales and was never a commercial success.

“It didn’t sell very well,” he admitted. “The quality of the picture wasn’t very good.”

Nevertheless, he kept faith with his invention. “I always, always carried a pocket camera and extender stick with me,” he said. “It’s like an extension of my arm. Whenever I want to extend it, I pull it out, and whenever I’m just walking around, I fold it up.” 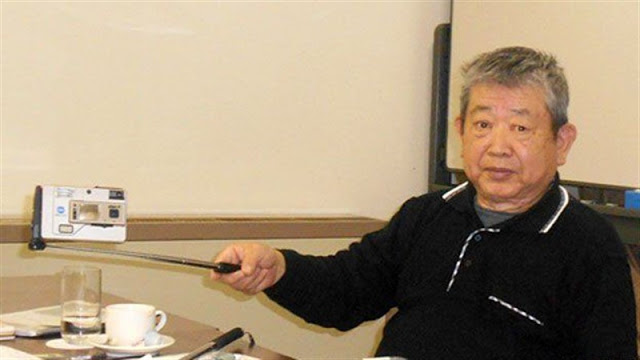 Ueda’s patent ran out in 2003, at least a decade before the recent boom in selfie sticks, but he’s philosophical about this. “My idea came too early, but that’s just one of those things. I patented about 300 ideas, so that was just one of them. We call it a 3am invention - it arrived too early.”

Ueda’s device may not have made a splash in the world of photo-taking, but it did make him the godfather of the selfie stick.

Posted by Yesterday Today at 8:40 AM