The London Milkman: The Story Behind One of the Most Iconic Images of the Blitz

As photography had become part of people's daily lives during the inter-war period, numerous iconic images were taken of the Second World War, creating an album of hope and horror, of atrocities and valor. The one that perhaps represented the fighting spirit of well-mannered Great Britain most clearly was the famous picture taken by a photographer called Fred Morley on October 9, 1940, depicting a milkman going about with his daily business amidst the rubble in London. 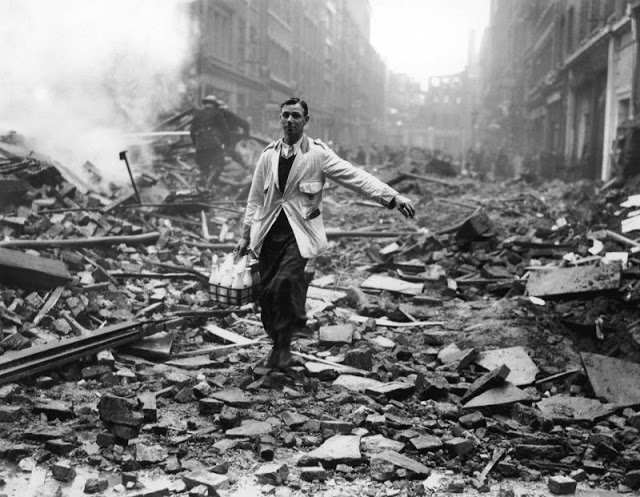 A milkman delivering milk in a London street devastated during a German bombing raid. Firemen are dampening down the ruins behind him.

The raid that took place that night was the 32nd in a row, the United Kingdom being mercilessly bombed night after night. The raid was also the one that saw a bomb make a direct hit on St Pauls Cathedral in London, one of the city’s most recognizable buildings, and with God's help perhaps, it failed to detonate.

Prior to this attack, the Cathedral had been bombed on December 29, 1940, when yet another famous photograph was created by a Daily Mail reporter, one which was soon dubbed the “War's greatest picture”. It depicts St. Paul's Cathedral, surrounded in smoke, just after a bombing raid. The monumental building stands tall and proud and, most importantly, undamaged. This was the sort of story and image, desperately needed in those times, that the press was urged to create. 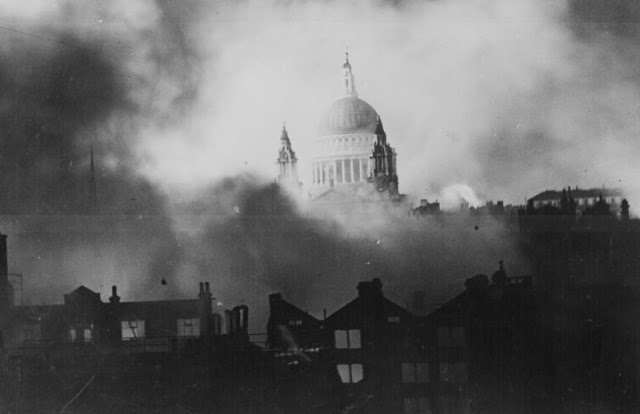 St Paul's Cathedral, rising above the bombed London skyline, is shrouded in smoke during the Blitz. The photograph was taken from the roof of the Daily Mail offices in Fleet Street.

On the other hand, the image was also used by the German propaganda machine, but this time to stress the level of destruction the Luftwaffe had caused to the enemy.

The Battle of Britain, which was one of the early turning points in the war, relied heavily on the defiance and morale of both the British soldiers and its citizens, who gave their best to withstand the terrifying bombing raids and rapidly deteriorating living conditions.

Thus the photograph of a milkman casually strolling through the ruins as he delivers milk became an unofficial symbol of the defiant British character.

At the time, the photograph helped boost the morale of the millions of British citizens who became ever more prepared to repel the Nazi war machine.  However, decades later it was revealed that the image was actually staged.

During the bombing raids, the British censors were working desperately to keep the nation calm by forbidding to authorize images depicting the scale of destruction which was being caused by the Luftwaffe. Since most of the photos taken by reporters were rejected, Morley had to figure out how to please the censors, but again to show the truth of what was happening in London.

On the October morning, he arrived at the scene to witness firefighters struggling to contain the fire caused by the bombing. The rubble was all around him. Since he couldn’t bear to let this go unnoticed by the press, Fred Morley devised a plan to override the censorship. 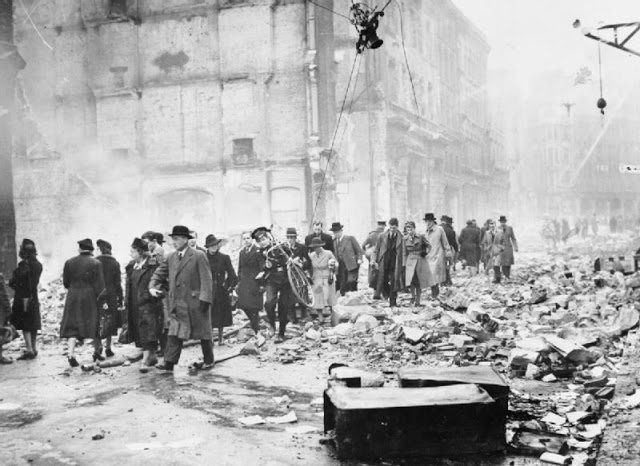 He had seen a milkman in the area and asked him if he could borrow his coat and a crate full of milk bottles. Morley’s assistant then took the recognizable white coat and posed with the crate as his boss took pictures.

The result was an image that became a part of the collective memory of the war. The image appeared spontaneous while depicting the stoicism of the British working man who casually continues with his day job, undisturbed by the threat of destruction from above. The power of the message the photo conveyed was recognized by the British censors, who decided to print it in the newspapers.

Even though the photo was staged, its role in raising the spirit of the British people during a time when it was uncertain whether or not the island would be able to deter the enemy was priceless and its timing was perfect.