Twain in Tesla's Lab: The Friendship Between Nikola Tesla and Mark Twain

Nikola Tesla and Mark Twain were friends and mutual admirers. Tesla – recognized as a scientist, inventor and discoverer, Twain – famous writer, travel writer and a satirist – both of them were real dreamers. 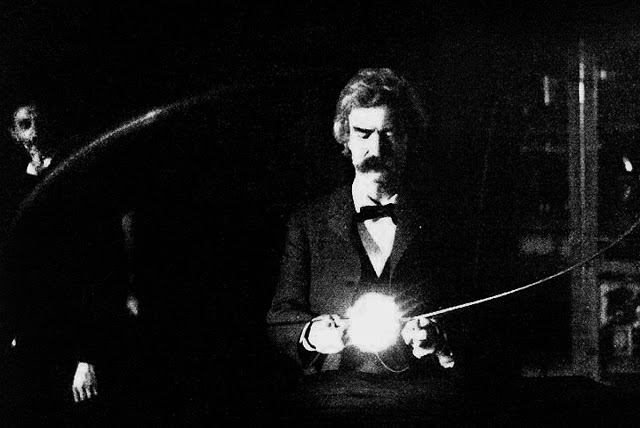 Mark Twain (penname of Samuel Langhorne Clemens) in the lab of Nikola Tesla, spring of 1894. Clemens is holding Tesla's experimental vacuum lamp, which is powered by a loop of wire which is receiving electromagnetic energy from a Tesla coil (not visible). Tesla's face is visible in the background.

As well as being a gifted writer, Samuel Clemens (Mark Twain) was fascinated with technology. When he was born in 1835, sailing was the usual means of crossing the Atlantic, and burning oil or gas the usual means of lighting the night. When he died in 1910 steamships carried him across the Atlantic (and Pacific) in record time and electricity was becoming a household amenity.

One of the scientists seeking applications for electricity was Nikola Tesla (1856-1943), who was born in Serbia before emigrating to the US. Most of his scientific work focused on electricity, and he made a number of important inventions, including the Tesla coil and the polyphase motor. Tesla used the coil to conduct experiments, but because the coil can produce enormous electrical sparks it is still used in electricity demonstrations.

Tesla and Clemens seem to have established a friendship in the 1890s. Tesla later recalled how he had read some of Clemens’s early works while recovering from an illness in Serbia during the 1870s.

Clemens had long been fascinated by electricity and had invested in the development of an electrical motor during the 1880s. His particular interest in Tesla began after hearing about a motor that Tesla had invented under the company Westinghouse. He recognised that Tesla’s motor, which used alternating current, was superior to that of his inventor partner, James W Paige, which used direct current. Tesla apparently advised Clemens against investing in Paige’s motor, although Clemens still lost a large sum on Paige’s mechanical typesetter.

During the 1890s Clemens and his family were living in Europe, partly to escape from financial troubles and partly with a view to improving the health of his wife and daughter. However, Clemens returned frequently to New York. He was involved in the foundation of the Players Club in 1888, and in 1894 invited Tesla join it. He also visited Tesla in his laboratory, where he took part in experiments.

There is very little surviving correspondence between the two, but there are some striking photographs taken in Tesla’s laboratory using phosphorescent light. 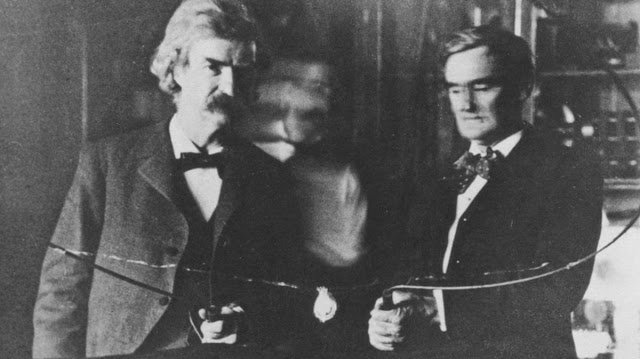 The most famous account of Clemens’s participation in an experiment is when he spent too long on an electromechanical oscillator ( a vibrating plate) that Tesla thought might be medically therapeutic. The plate acted as a strong laxative and Clemens had to rush for the toilet.

Tesla’s profile had risen in the very public debates over the appropriate way to supply electricity to households. Thomas Edison advocated the use of direct current and this was initially installed in many homes. Alternating current was considered dangerous. Edison used it to electrocute animals in an attempt to permanently associate AC with destruction and preserve his preferred DC system.

Clemens was one of America’s most celebrated writers and no stranger to controversy. He was outspoken and critical of fellow writers. He commented on political and social issues such as race, imperialism, trade unions and feminism.

The friendship of Tesla and Clemens was established at a time when professional categories were more fluid. The line between scientist and entrepreneur was hard to draw. Interesting the wider public in your research was still an important component of developing a career. Tesla saw nothing odd about inviting friends into his laboratory to view experiments.

Although most scientists today still see the importance of engaging the public, the laboratory has became a space for scientists only.

(This original article was written by Juliana Adelman and published on The Irish Times)
Posted by Yesterday Today at 11:03 AM