20 Rare Color Photographs of Nazi Germany During the 1930s

These photos are as fascinating as they are chilling. It’s crazy to see all of those images in color… but also pretty scary, too.

Nazi Party was not just a political organization, it was a psychological propaganda machine. The Nazis had an incredible sense of aesthetics and fully understood the power of iconography and branding. Enter inside the Nazi world through these amazing color photos and be thrilled. The symbols and colors of Nazism were all carefully orchestrated to have maximum psychological effect. There was nothing accidental about the structure of the crooked cross or the usage of dramatic colors such as red, white and black. Long, draping banners and standards with Roman eagles and gilded leaves all were designed to evoke images of strength, power, and a connection to history.

Nazi symbols are alluring. They look good. They are sharp, carefully tailored to catch the eye and made to inspire passions. The armbands worn on black uniforms are a striking statement of virility and supreme confidence. On the SS uniforms, the addition of the skull and crossed bones, the totenkopf, was a deliberate move to instill fear and terror in the hearts of anyone who faced the uniform. The men wearing it felt empowered by the menacing appearance of the uniform.

The ceremonial was considered as art. There was nothing accidental or incidental about Nazi pageantry. Everything was carefully staged and orchestrated. Nighttime processions lit by fire and bonfires upon which books were burned were all choreographed for effect. They reveled in tales of heroism and glorified war. Images from the Nuremburg rallies still impress us today with the absolute precision and dramatic scale of the stage set by the Hitler regime on the Zeppelin fields.

The black-white-red color scheme is based upon the colors of the flag of the German Empire, the black-white-red colors were commonly associated with anti-Weimar Republic German nationalists after the fall of the German Empire. In Mein Kampf Adolf Hitler defined the symbolism of the swastika flag: the red represents the social idea of the Nazi movement, the white disk represents the national idea, and the black swastika, used in Aryan cultures for millennia, represents “the mission of the struggle for the victory of the Aryan man, and, by the same token, the victory of creative work”. Hitler knew that the colors red, white and black combined create a psychological sense of intimidation and power, which is why a lot of propaganda like these banners use the same color combination.

The photos were taken by Hugo Jager, a former personal photographer of Adolf Hitler. He traveled with Hitler in the years leading up to power and throughout World War II. He was one of the few photographers who were using color photography techniques at the time. As the war was drawing to a close in 1945, Jaeger hid the photographs in a leather suitcase. He then encountered American soldiers prompting fears of potential arrest and prosecution for carrying around so many images of such a wanted man. When the soldiers opened the case however, their attention was distracted by a bottle of cognac they found there, which they opened and shared with Jaeger. Jaeger buried the photographs inside 12 glass jars outside Munich. The photographer returned to the burial place over several years to ensure they were safe. He dug up all of the photographs ten years later in 1955, storing them in a bank vault. In 1965, Jaeger sold them to LIFE magazine. 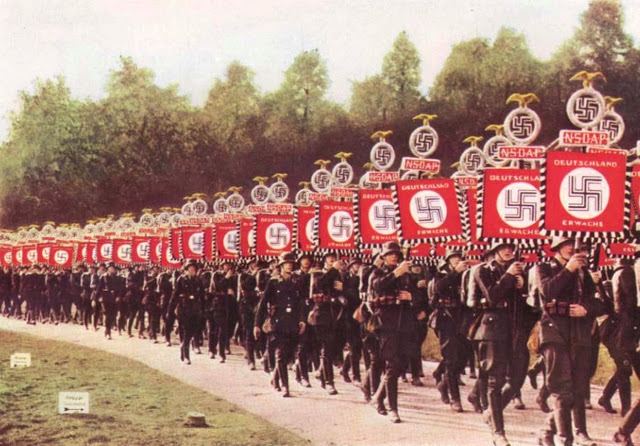 The ceremonial was considered as art. 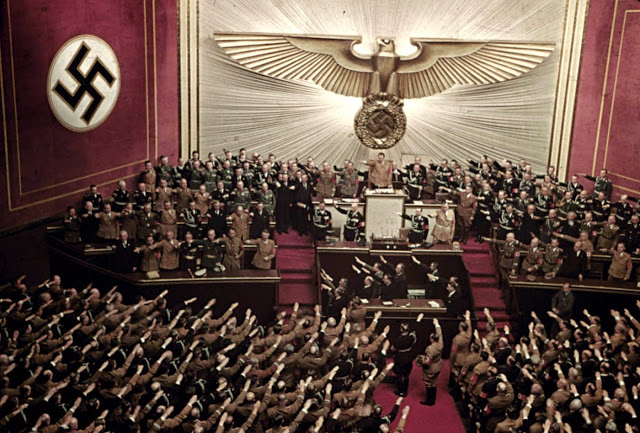 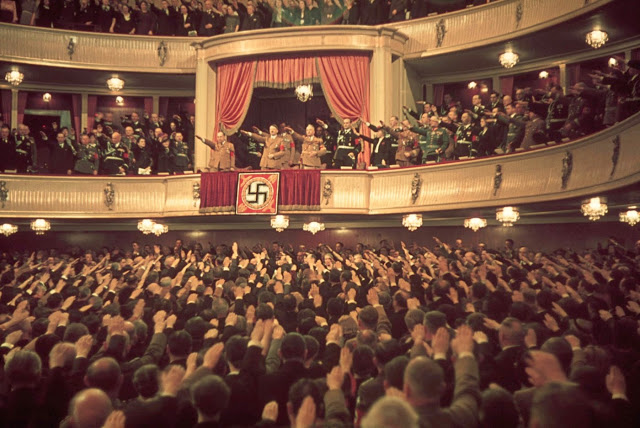 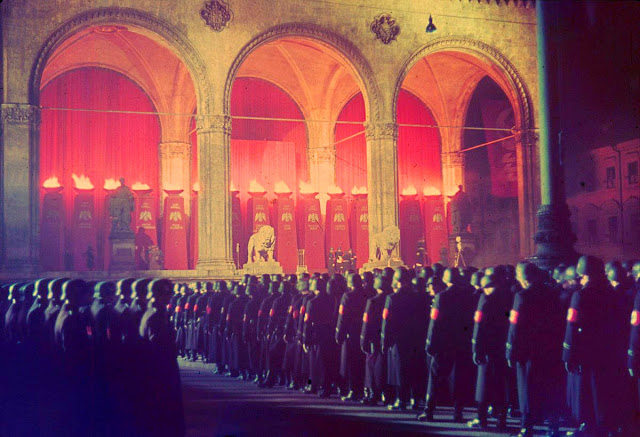 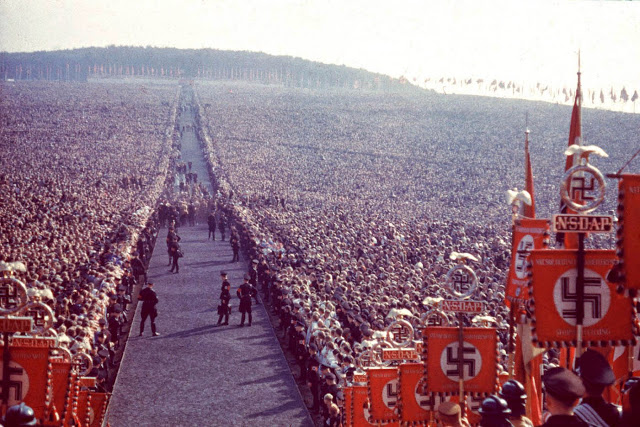 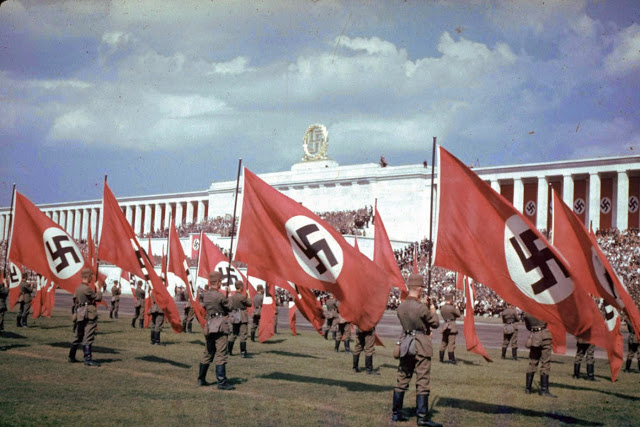 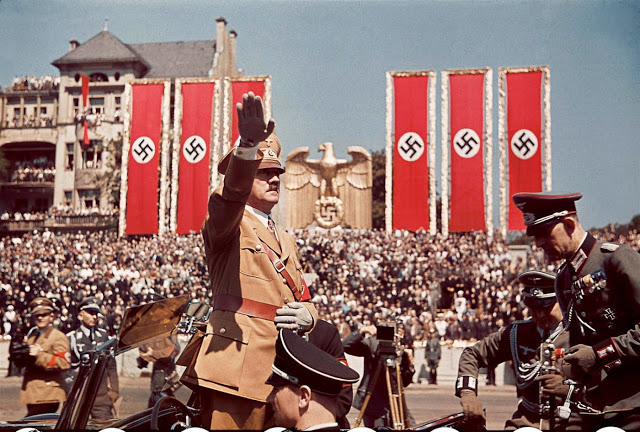 Adolf Hitler salutes troops of the Condor Legion who fought alongside Spanish Nationalists in the Spanish Civil War, during a rally upon their return to Germany, 1939. 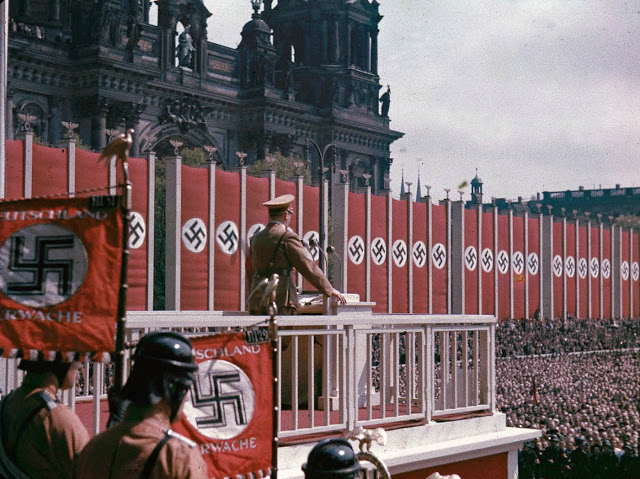 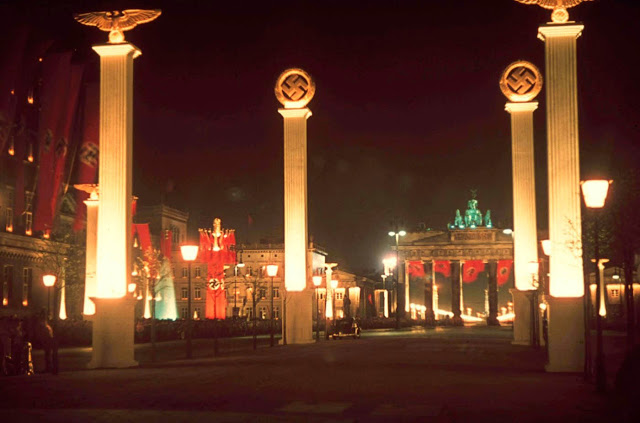 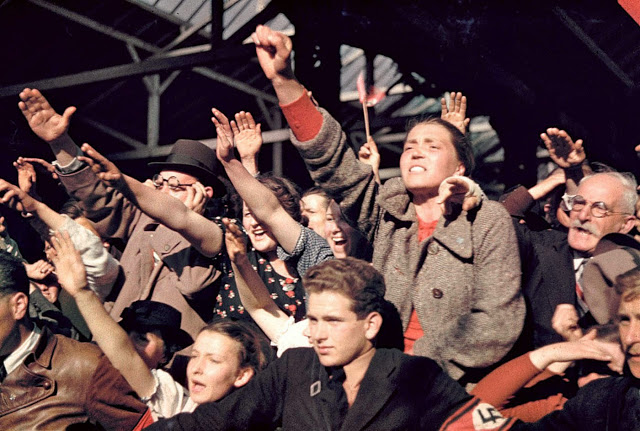 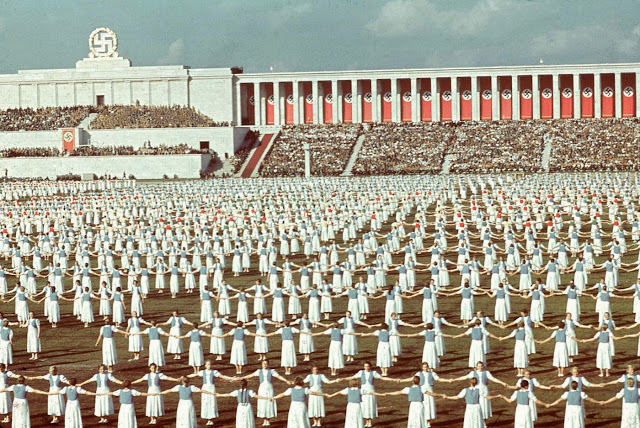 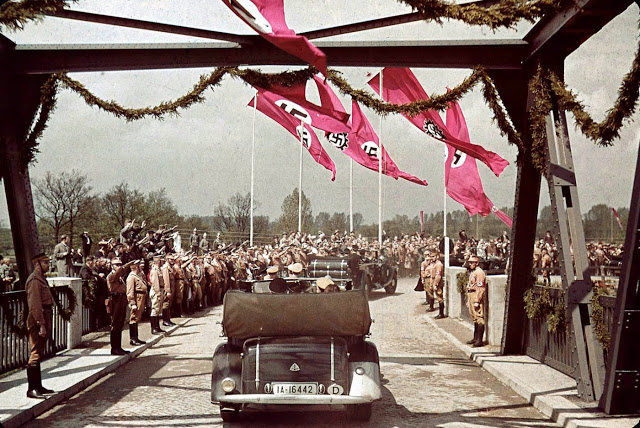 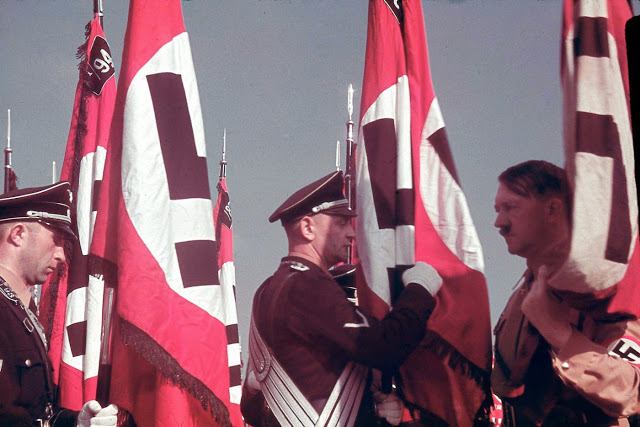 Adolf Hitler at the swearing-in of SS standard bearers at the Reich Party Congress, Nuremberg, 1938. 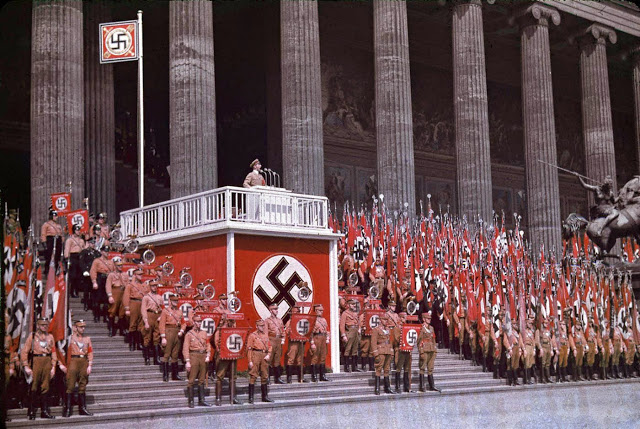 Reich Minister of Propaganda Joseph Goebbels speaking at the Lustgarten in Berlin, 1938. 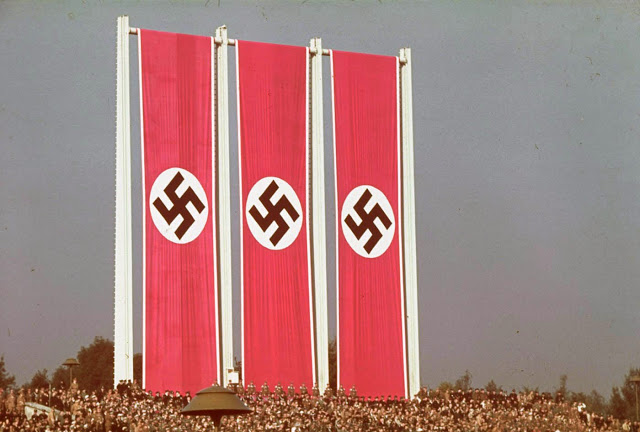 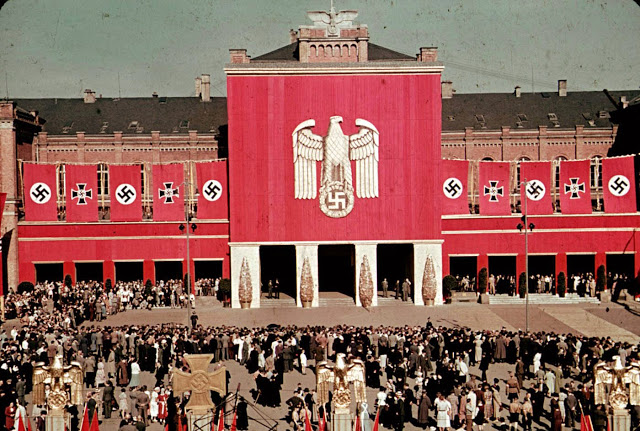 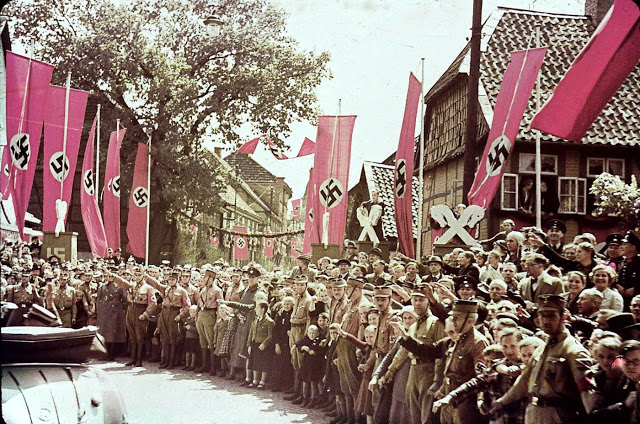 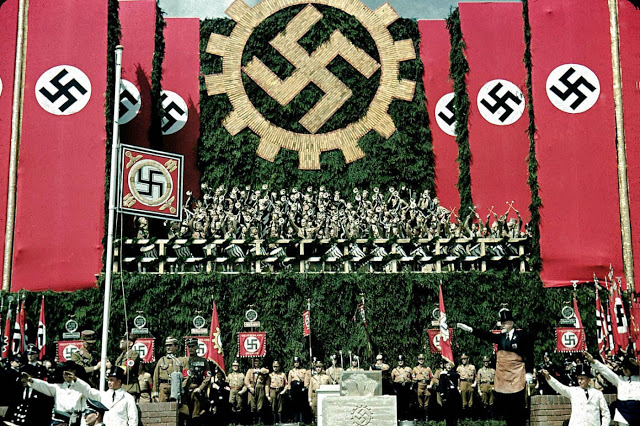 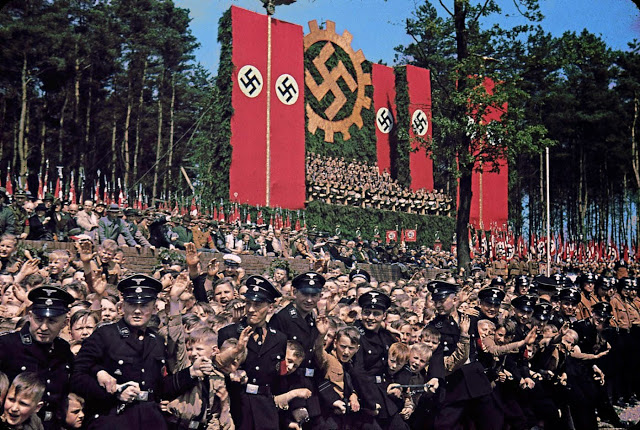 Another image from Volkswagen Works cornerstone ceremony, near Wolfsburg, 1938.

Posted by Yesterday Today at 11:01 AM