During World War II, Many Items Were Rationed in the United States, Including Shoes!

During the Second World War, you couldn't just walk into a shop and buy as much sugar or butter or meat as you wanted, nor could you fill up your car with gasoline whenever you liked. All these things were rationed, which meant you were only allowed to buy a small amount (even if you could afford more). The government introduced rationing because certain things were in short supply during the war, and rationing was the only way to make sure everyone got their fair share.

The Japanese attack on Pearl Harbor dramatically ended the debate over America's entrance into the war that raged around the world. As eager volunteers flooded local draft board offices ordinary citizens soon felt the impact of the war. Shoes were rationed because leather and rubber were in short supply. (Rubber especially, as Japan controlled Southeast Asia, where the bulk of the world's rubber was produced.) 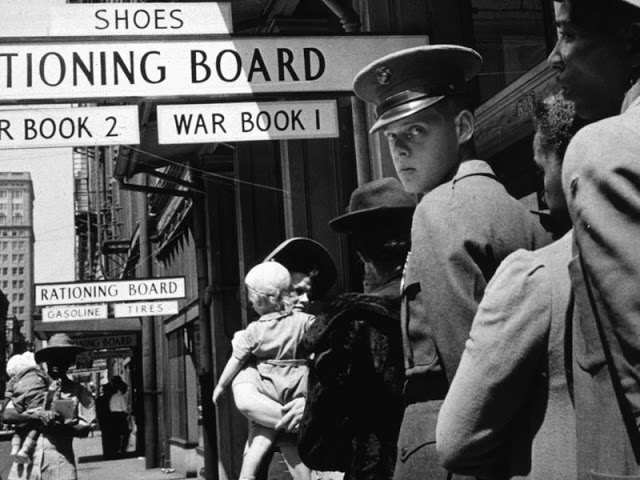 Line for the Rationing Board on Gravier Street, New Orleans. 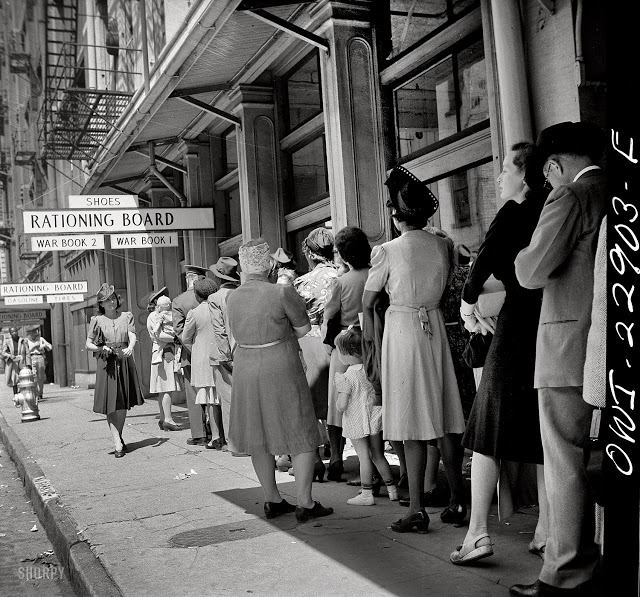 Starting September 30, 1942, men's rubber boots and rubber work shoes were placed under rationing. To obtain a new pair, a man had to apply to the local ration board, prove he needed the shoes for essential industry—not for sport—and turn in the old pair. Galoshes and overshoes were not rationed because they used less crude rubber, but sportsmen couldn't get boots, and sneakers were no longer produced.

The strict rule that the ration stamp had to be torn from the book in the presence of the retailer was lifted for catalog purchases. If you wanted an extra pair of shoes, you had to fill out a long application at the ration board, listing every pair of footwear you owned, and explaining why another pair was essential for your occupation and why another pair was required to prevent serious hardship. 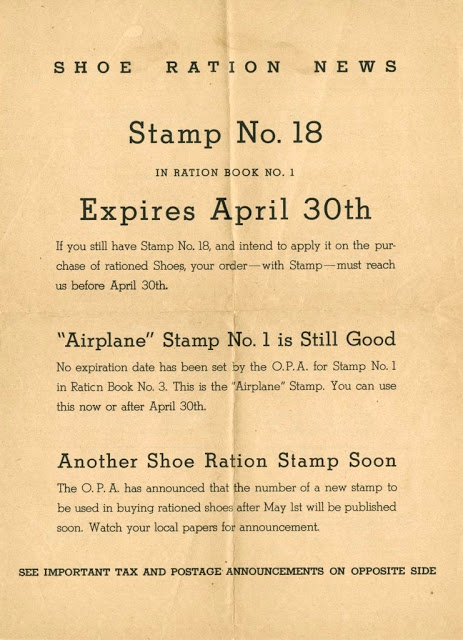 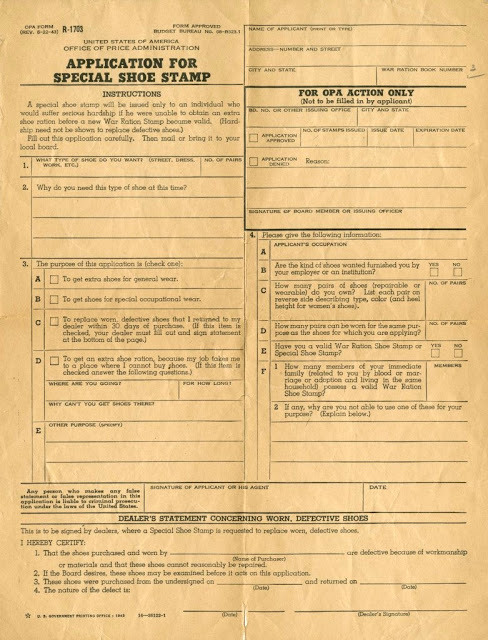 No exceptions were made for children and their rapidly growing feet. Families pooled their stamps, and adults made do with fewer shoes to provide for their children’s needs. However, pediatricians and podiatrists complained publicly that shoe rationing would produce a generation of “foot cripples.”

To make do with less, people took care of the footwear they already owned, keeping rubber boots clean, dry, and away from excess heat or cold, and repairing shoes and boots whenever possible. Shoes made of fabric, such as espadrilles, were not rationed and became fashionable. Women also turned to fabric purses and belts. 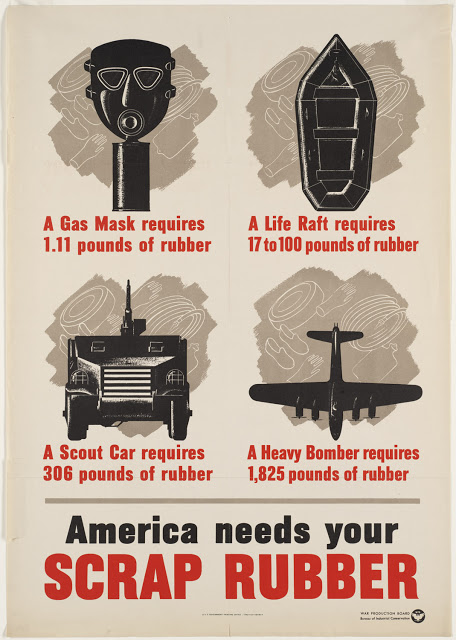 Some people did not make do. Theft and black market profiteering were a continuing problem. For example, on May 3, 1944, a man was arrested in Pittsburg, California for stealing seven pairs of shoes from a shipment. The June 8, 1944 issue of the Antioch Ledger reported his sentence—six months or $500.

All told, shoe rationing lasted more than three years. When it concluded in late October 1945, more than a month after the war ended, OPA chief Chester Bowles called it “one of our most successful programs.” “By giving everyone a little less,” Bowles said, distilling the sense of shared sacrifice that defined the effort, the OPA ensured that there was enough “to go around.” 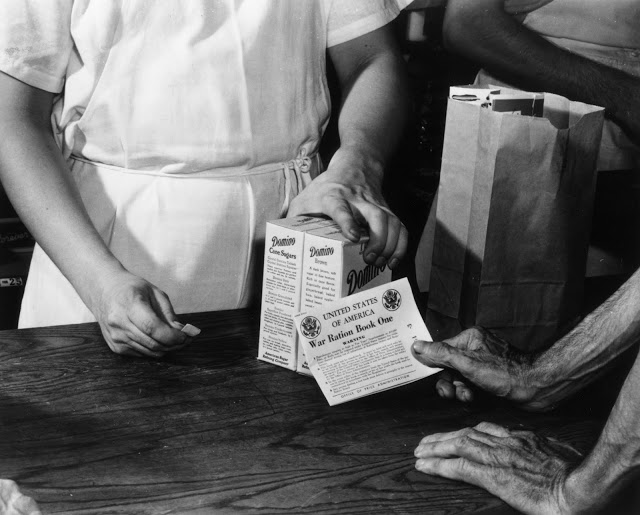 July 1942: Close-up of a man behind a counter handing over two boxes of Domino sugar to a man handing over a War Ration Book. In an effort to ration sugar, coupons from the War Ration Books assured a just distribution of the nation's sugar supply to all. 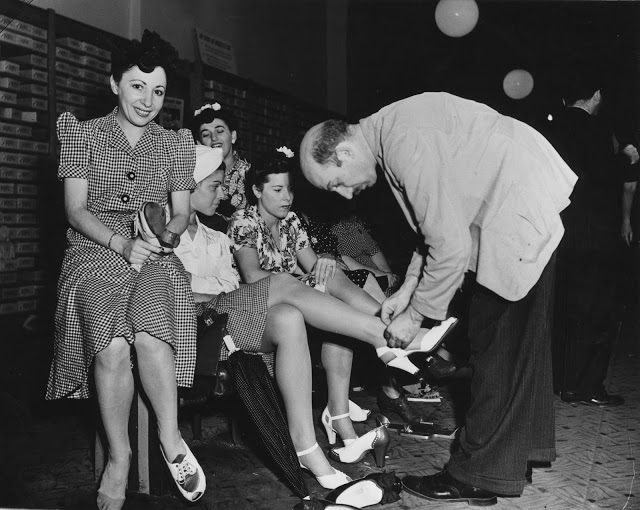 June 14, 1943: With the all important No. 17 coupon expiring Tuesday, New York shoe stores were jammed even on Sunday. These young ladies are trying on some white models at a store on Delancey St., on lower East Side, New York, 1943. 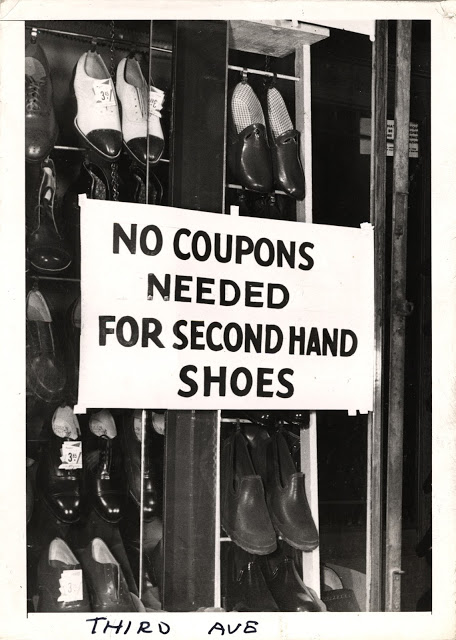 View of shoes with a sign that reads 'No Coupons Needed for Second Hand Shoes', New York, February 1943. Business doubled recently at a store on 92 Third Avenue that sells factory rejects and second hand shoes not affected by rationing. General sales of shoes increased on the first day of rationing; most are bought by working men. 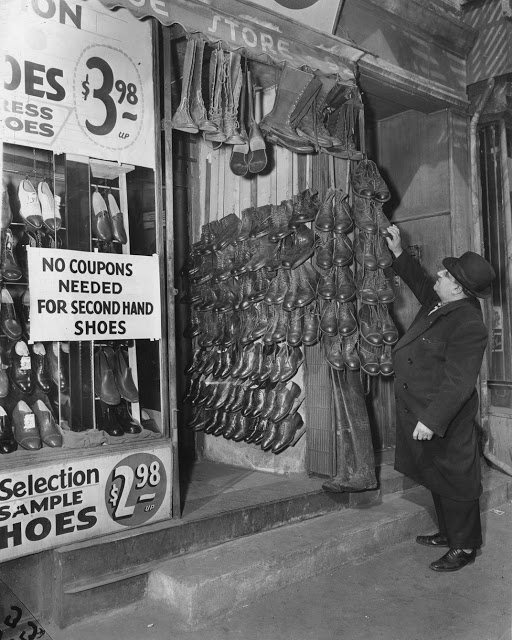 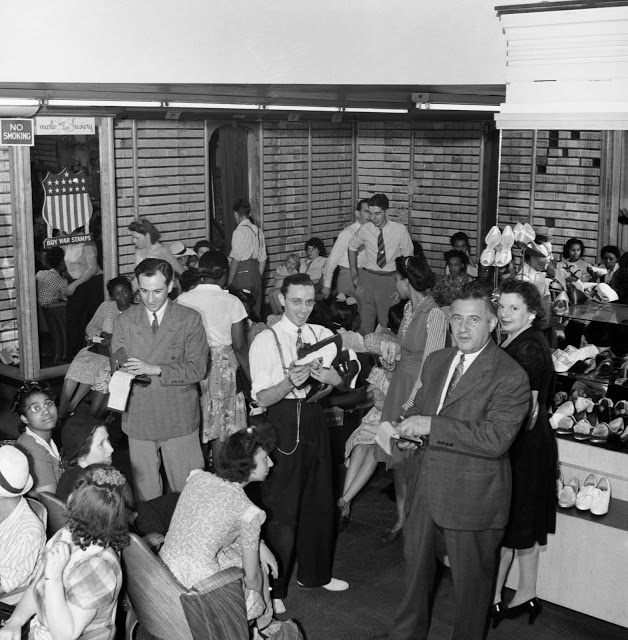 A number of people crowd into a shoe store on the last day for War Ration shoe coupon 17. Washington, DC, June 1943. 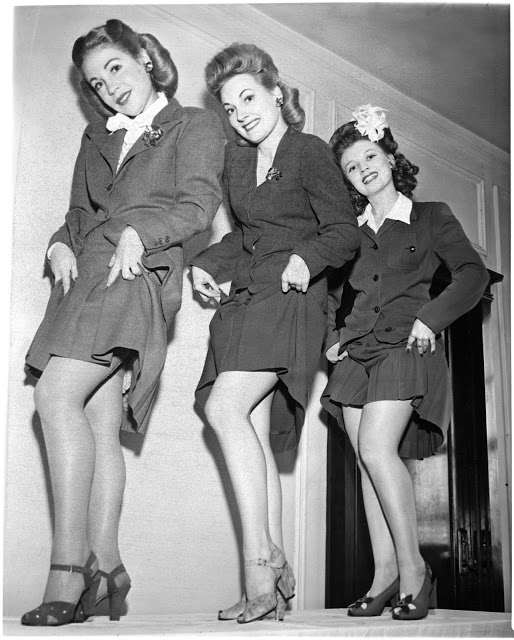 Three Models Showcasing Shoes made from Material that is not being Rationed during WWII, Chicago, Illinois, USA, 1944.