Liepaja Massacres: Shocking Photos Taken by Nazi Perpetrators of Jewish Women Moments Before Their Execution in Skede, Latvia on December 15-17, 1941

The murders in the dunes at Skede on the Baltic shore, some fifteen kilometers north of the city and about a kilometer from the road towards the sea, began as early as July 1941. Some 200 Jews were murdered there.

During a three-day massacre on December 15-17, 1941, German and Latvian units killed 2,749 Jews, more than half of Liepaja’s Jewish population. Preparations for the operation began some days before. On December 13, 1941, Liepaja Police Chief Obersturmbannfuehrer Fritz Diedrich placed an announcement in the Latvian newspaper Kurzemes Vards stating that Jews were forbidden to leave their living quarters on Monday, December 15, and Tuesday, December 16.

On the night of December 13, Latvian police forces began to arrest Liepaja’s Jews not yet concentrated in the ghetto. The victims were brought to the Women’s Prison, where Jews of all ages were crammed into the courtyard. The Jews were ordered to stand with their faces towards the wall, and warned not to move or look around for relatives or at the watchmen. Some were transported to Skede on the evening of the following day and crowded into a barn (a wooden structure, described also as a garage).

In the early morning of December 15, a column of victims was driven from Liepaja by Latvian policemen, under the supervision of the German SD, to the same barn in Skede where Jews from the prison had been taken. They were taken in groups of twenty to a site forty to fifty meters from a deep ditch dug in the dunes nearby, parallel to the shore. The ditch was about three meters wide and 100 meters long. There they were forced to lie face down on the ground. Groups of ten were then ordered to stand up and, apart from the children, to undress, at first to their underwear and then, when taken near the ditch, completely. They were shot by a German unit, the Latvian SD Platoon headed by Lt. Peteris Galins, and a Latvian Schutzmannschaften team.

During the murder operation, the Jews were placed along the side of the ditch nearest the sea, facing the water. The killing squad was positioned across the ditch, with two marksmen shooting at the same victim. Children who could walk were treated as adults, but babies were held by their mothers and killed with them. A “kicker” rolled in those corpses that did not fall directly into the ditch. After each volley, a German SD man stepped into the ditch to inspect the bodies and finish off anyone who showed signs of life.

The clothes were piled up in heaps and taken away by German military trucks. During the murder operation, Carl Strott and another officer, Erich Handke, took pictures with a Minox, and senior Wehrmacht and navy officers visited the site.

These photos were found by a Jewish man named David Zivcon, who worked as an electrician at the SD headquarters in Liepaja. A few weeks or months after the execution, he was sent to fix something at Strott’s residence, and notices four negative reels in a partially open drawer. He took them, made copies with the help of a friend, and smuggled them back to the apartment after making up an electricity problem. He put the copies in a box and buried them in a stable. After liberation, he took the photos and handed them to Soviet Intelligence officers. The photos were eventually presented as evidences at the Nuremberg trials. 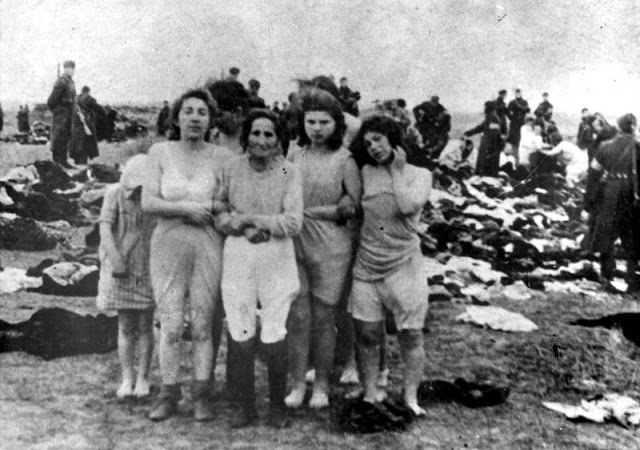 These women had been forced to disrobe and then pose for the camera, December 15, 1941. Scholarly work has led to the identification of some of the women shown. From left to right: (1) Sorella Epstein; (2) believed to be Rosa Epstein, mother of Sorella; (3) unknown; (4) Mia Epstein; (5) unknown. Alternatively, (2) may be Paula Goldman, and Mia Epstein may be (5) instead of (4). 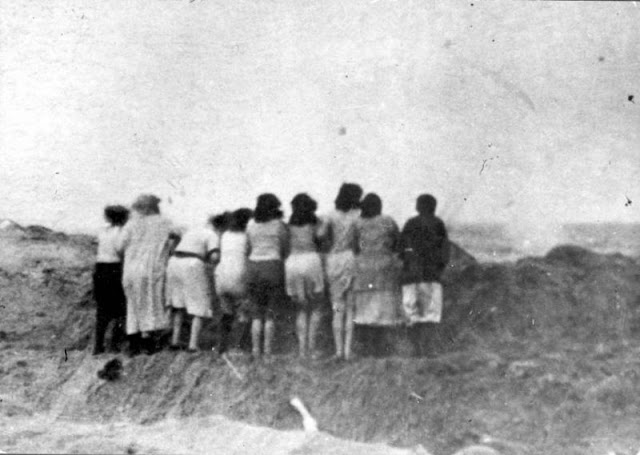 Jewish women about to be shot by Nazis, on the beach at Libau, Latvia. 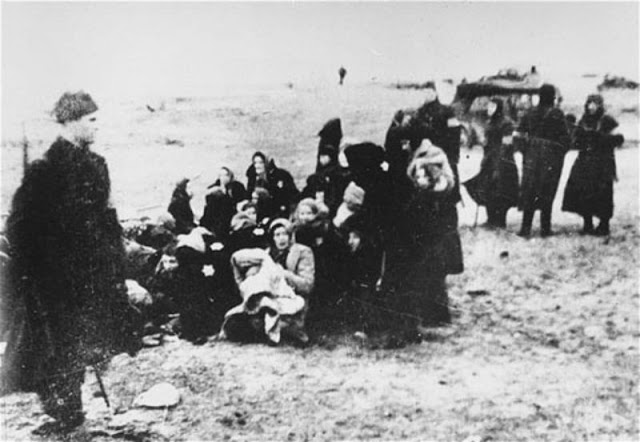 Members of a Latvian militia unit assemble a group of Jewish women for murder on a beach near Liepaja, December 15, 1941. 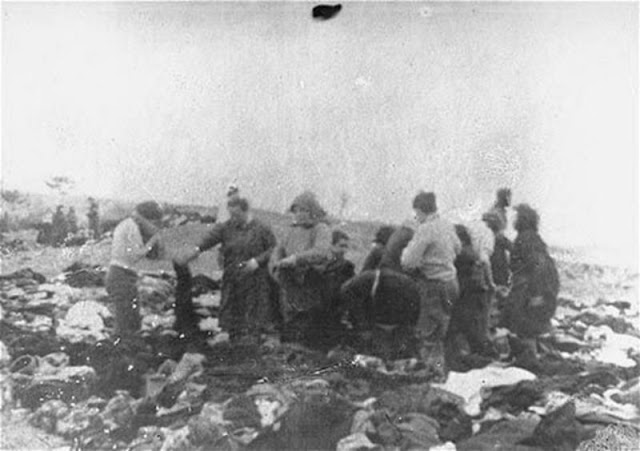 Women and children forced to undress prior to shooting in Libau, Latvia. 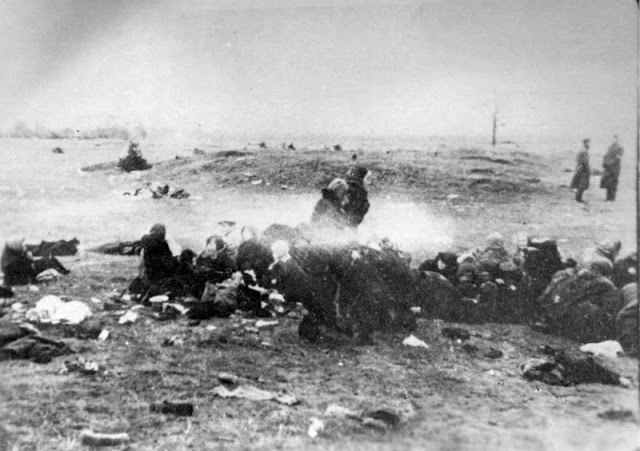 A group of Jewish women huddled together, waiting to be shot on the beach. 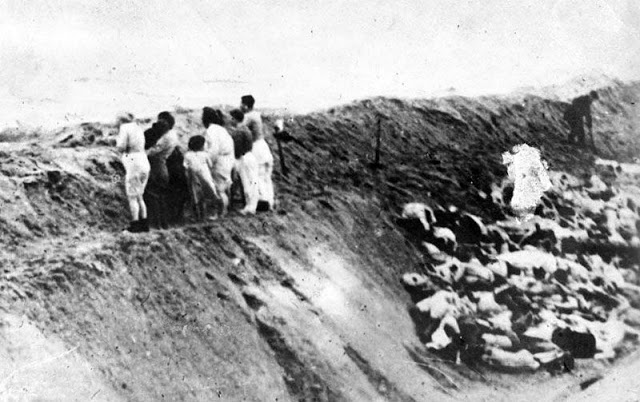 Jewish women and children from Liepaja stand on the edge of a pit before being murdered, December 15, 1941. 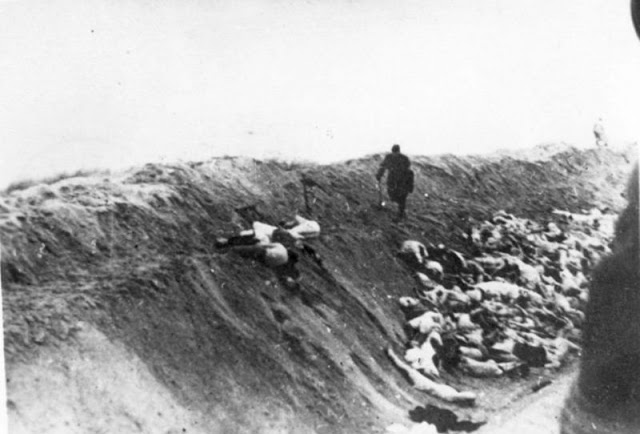 A Latvian policeman known as a 'kicker' walks along the edge of a mass grave filled with the bodies of women and children who had just been shot, December 15-17, 1941. It was the kicker's job to push in the bodies that did not fall into the mass grave during the shooting. 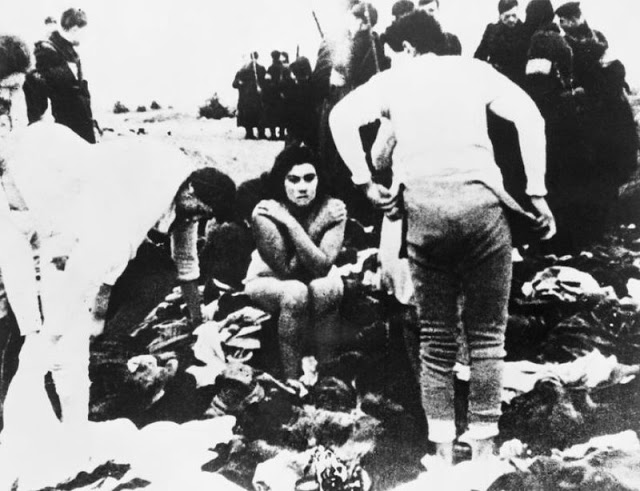 Members of a SS Einsatzgruppe (Special Task Forces) are forcing Jews to undress for execution. 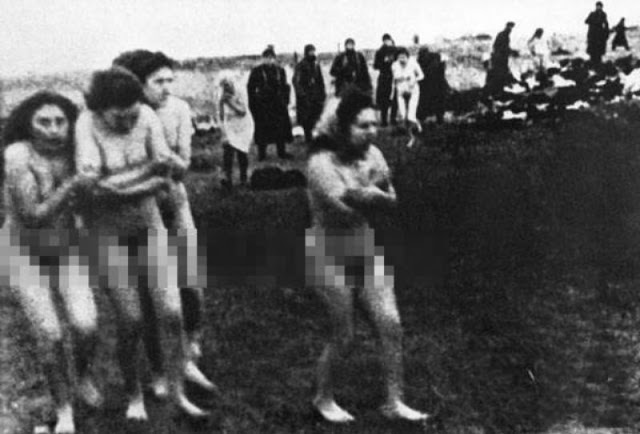 Jewish women were forced to strip off their clothes. 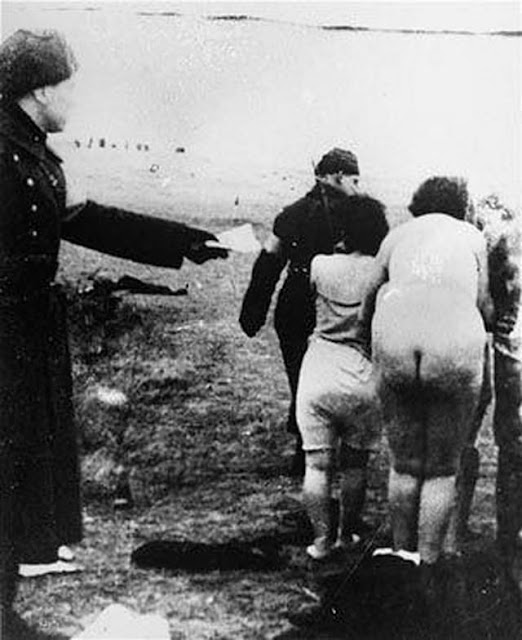 A Latvian guard leads Jewish women to the execution site, on the beach at Libau, Latvia.