The Mysterious Hasanlu Lovers and Their 2800-Year Old Kiss

The Hasanlu Lovers are human remains found by a team from the University of Pennsylvania led by Robert Dyson at the Teppe Hasanlu archaeological site, located in the Solduz Valley in the West Azerbaijan Province of Iran, in 1972. The image depicts two human skeletons, seemingly in an embrace, which earned the photograph its title Hasanlu Lovers or The 2800 Years Old Kiss. 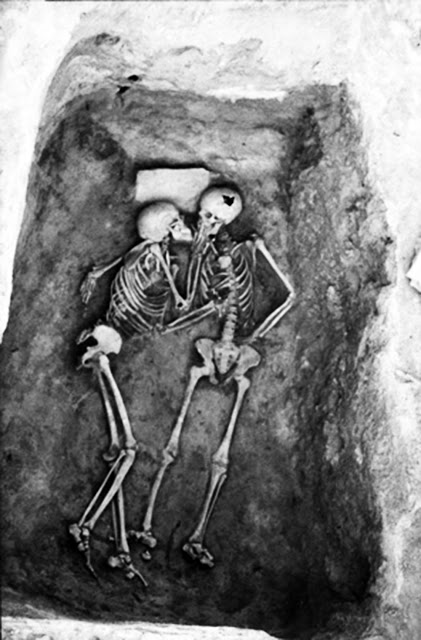 Found together in a bin of plaster covered mudbrick during excavations in 1972, these intertwined skeletons date to the destruction of Hasanlu (ca. 800 BCE). The evocative position in which they were found has led to speculation about their identities and relationship to each other. The two are close together facing each other. The skeleton on the left appears to be reaching out its right hand to touch the face of the skeleton on the right. They both have their arms around each other. Curiously, there were no objects found with these individuals with the exception of a stone slab in the bin that is under their heads. Both skeletons have evidence of trauma on their bodies sustained at or around the time of their death.

How the two came to be in the bin is unknown, but perhaps they were hiding there as a place of refuge during the final sacking of Hasanlu. They along with the other individuals at the site represent poignant tales of the darker side of human behavior: destruction, warfare, and interpersonal violence.

To this day, nobody knows the real story of the Hasanlu Lovers. Only that they once lived and loved each other and that even death cannot keep them part. The Hasanlu skeletal material is the subject of many research questions. Dozens of scholars and students from all over the world come to the Penn Museum to study the collection.

(via Penn Museum)
Posted by Yesterday Today at 11:01 AM