20 Disturbing Pictures That Show What Life in the U.S Looked Like Under Jim Crow Laws

Jim Crow laws were state and local laws that enforced racial segregation in the Southern United States. Enacted by white Democrat-dominated state legislatures after the Reconstruction period, in the late 19th century, the laws were enforced until 1965.

In practice, Jim Crow laws mandated racial segregation in all public facilities in the states of the former Confederate States of America, starting in the 1870s and 1880s, and were upheld in 1896, by the U.S. Supreme Court's "separate but equal" legal doctrine for African Americans, established with the court's decision in the case of Plessy vs. Ferguson. Moreover, public education had essentially been segregated since its establishment in most of the South, after the Civil War (1861–65).

The legal principle of "separate, but equal" racial segregation was extended to public facilities and transportation, including the coaches of interstate trains and buses. Facilities for African Americans were consistently inferior and underfunded, compared to the facilities for white Americans; sometimes there were no black facilities. As a body of law, Jim Crow institutionalized economic, educational, and social disadvantages for African Americans. Legalized racial segregation principally existed in the Southern states, while Northern racial segregation generally was a matter of fact — enforced in housing with private covenants in leases, bank lending-practices, and employment-preference discrimination, including labor-union practices.

Here in pictures are many of the common sights during what became known as the Jim Crow era. 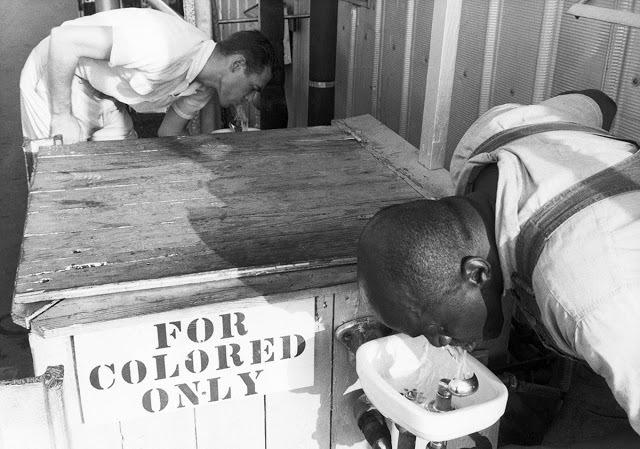 In this undated picture, men drink from segregated water fountains. 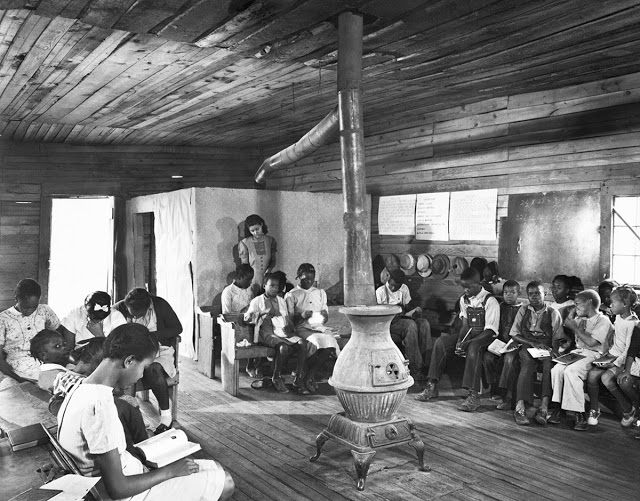 A teacher instructs a segregated class of black students at a poorly funded, one-room school in the backwoods of Georgia in 1941. 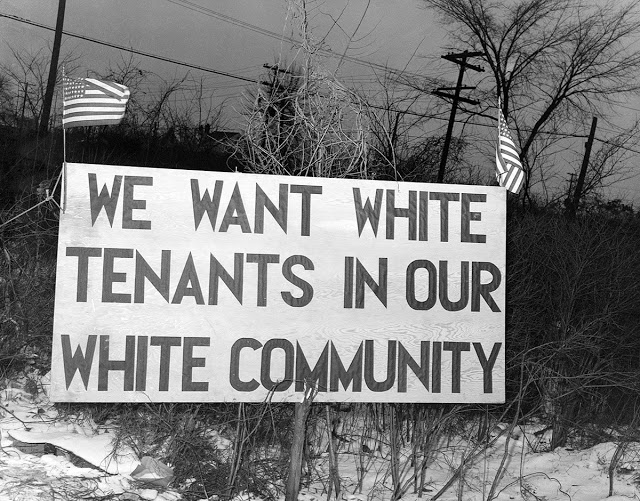 White tenants seeking to prevent black Americans from moving into the Sojourner Truth Homes, a federal governmental housing project, erected this sign in Detroit in 1942. 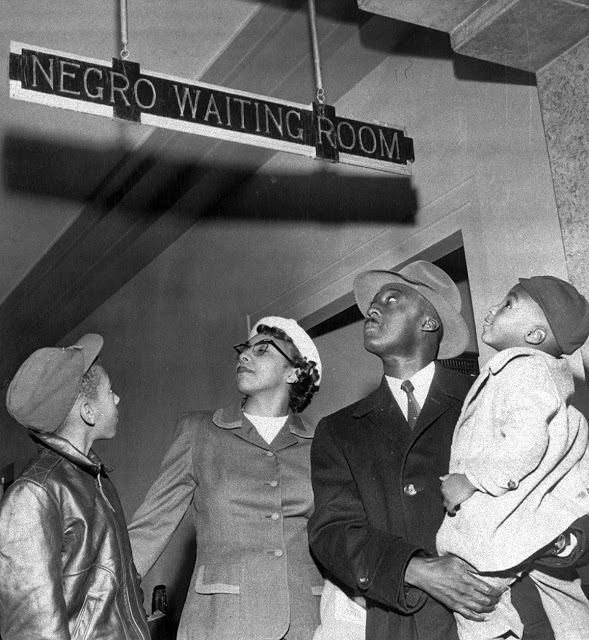 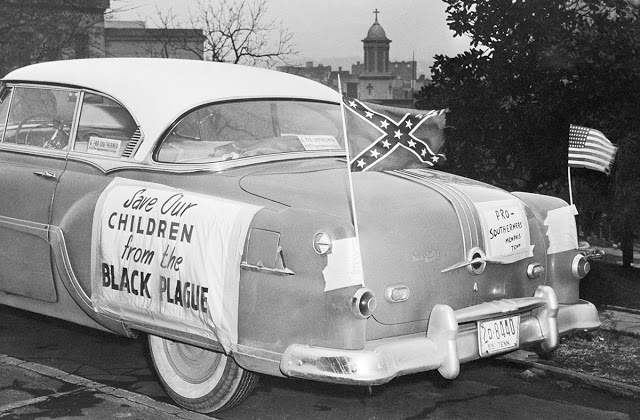 US and Confederate flags fly from a car parked on Tennessee's Capitol Hill in Nashville, where Gov. Frank Clement met with a delegation of pro-segregationists on Jan. 24, 1956. Clement turned down a bid to lead a fight for continued racial segregation, saying he did not plan to interfere with local authorities and their decisions on such matters. 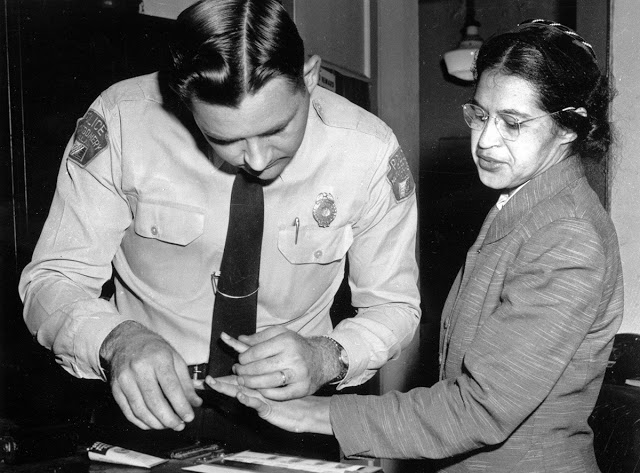 Rosa Parks is fingerprinted by a police officer in Montgomery, Alabama, on Feb. 22, 1956, two months after refusing to give up her seat on a bus for a white passenger on Dec. 1, 1955. She was arrested with several others who violated segregation laws. Parks' refusal to give up her seat led to a boycott of buses in December 1955, a tactic organized by the Rev. Martin Luther King Jr. 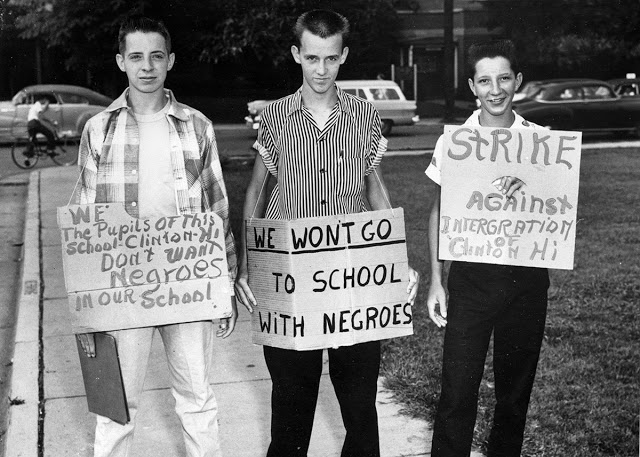 From left: Buddy Trammell, Max Stiles, and Tommy Sanders, students at Clinton High School in Clinton, Tennessee, picket their school when it becomes the first state-supported school to integrate, on Aug. 27, 1956. 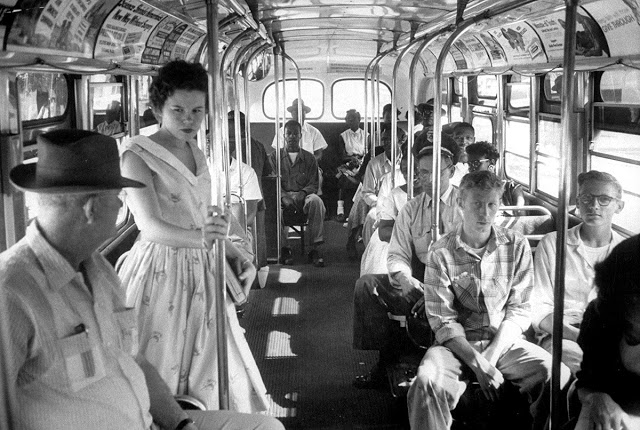 Black citizens sit in the rear of the bus in compliance with South Carolina segregation law in April 1956. 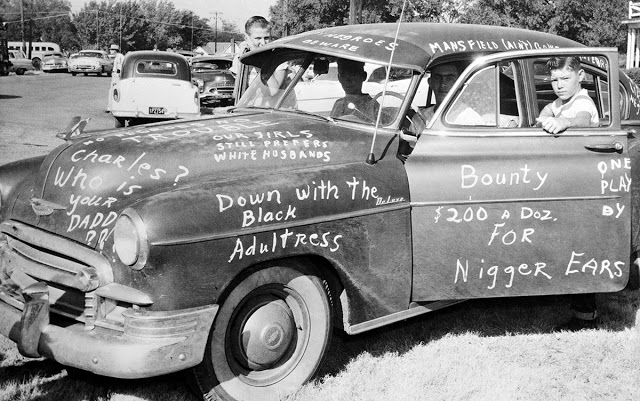 Roy Lee Howlett, 14, stands beside a car painted with signs protesting the desegregation of Mansfield High School in Dallas on Aug. 31, 1956. 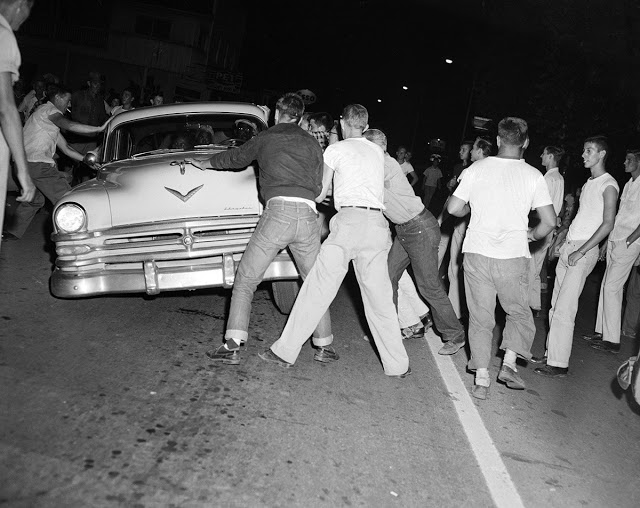 An unruly mob protesting integration of the Clinton High School attacks a car full of black people who just happened to be passing through on Aug. 31, 1956. 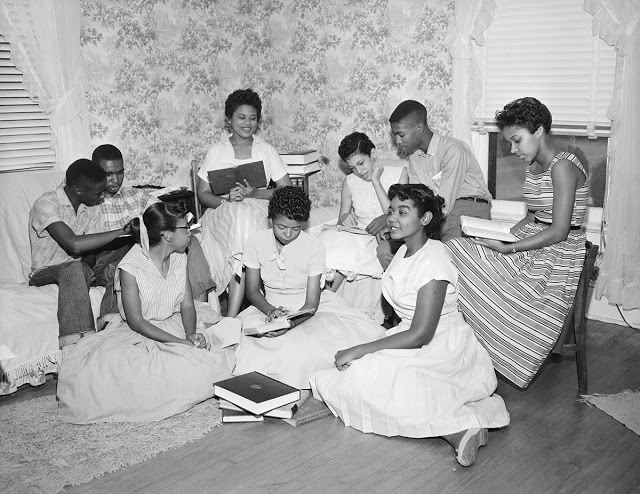 A group of students known as the Little Rock Nine form a study group after being prevented from entering Little Rock's newly integrated Central High School on Sept. 13, 1957. 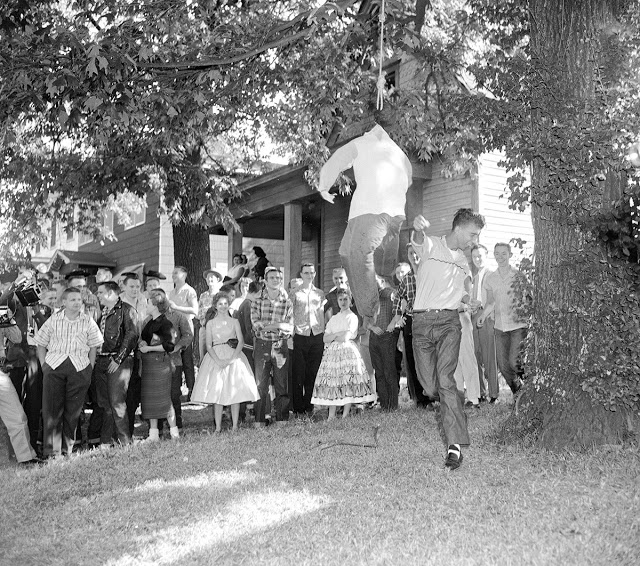 An unidentified white student slugs an effigy of a hanging black student outside Central High School in Little Rock, Arkansas, on Oct. 3, 1957, as nearly 75 students of the school walked out to protest integration. 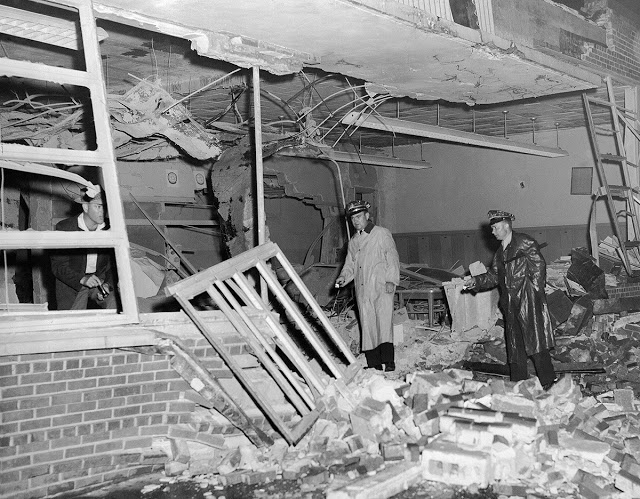 Police examine the wreckage of the newly desegregated Hattie Cotton grammar school, which was dynamited in Nashville, Tennessee, on Sept. 10, 1957. The entire east wall and four classrooms were demolished. The attack occurred after a single six-year-old black child was admitted at this school to the first grade. 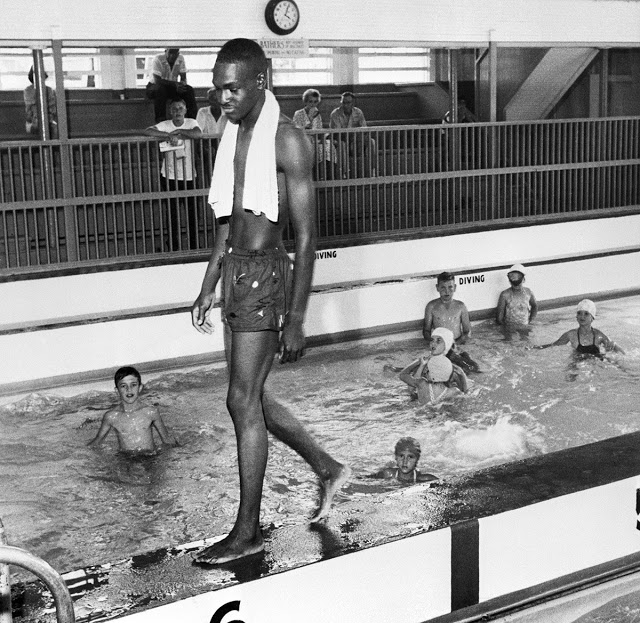 David Isom, 19, broke the color line in one of this city's segregated public pools on June 8, 1958, which resulted in officials closing the facility. 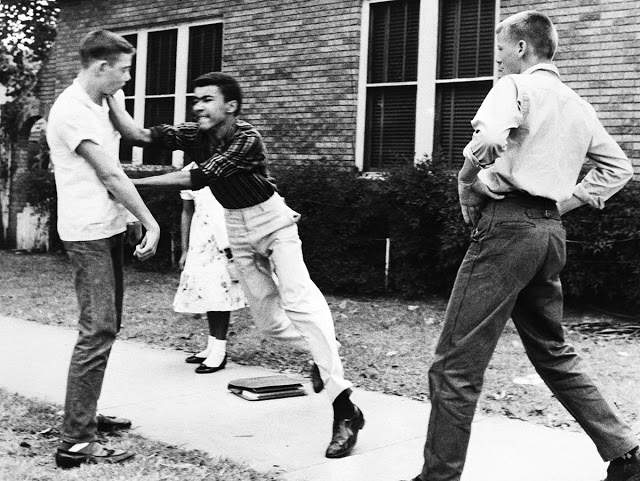 Johnny Gray, 15, punches a white student during a scuffle in Little Rock, Arkansas, on June 16, 1958. Johnny and his sister, Mary (standing behind him), were en route to their segregated school when the two white boys in the photo ordered them to get off the sidewalk. 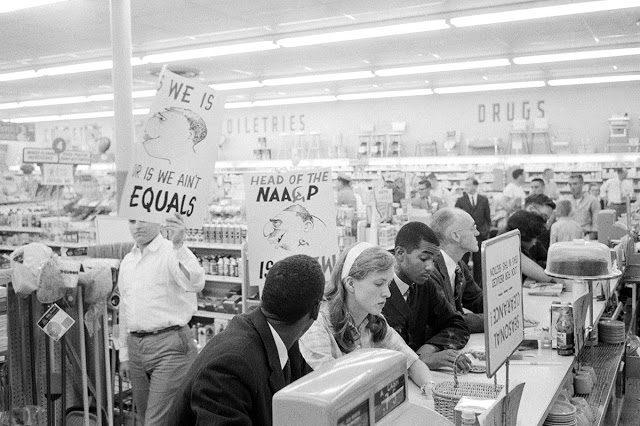 Demonstrators staging a sit-in at a drugstore lunch counter in Arlington, Virginia, are picketed by members of the American Nazi Party in 1960. 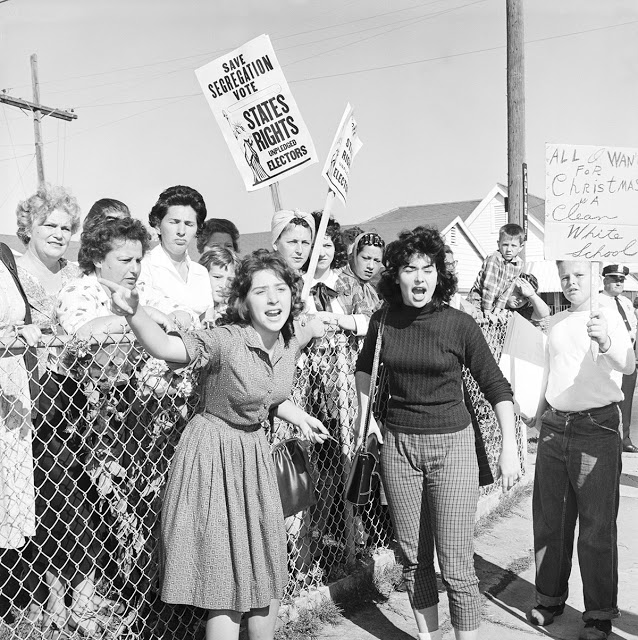 Women and teenagers at William Franz Elementary School yell at police officers during a protest against the desegregation of the school, as three black youngsters attended classes at the school for the second day on Nov. 15, 1960. The sign on the far right reads: "All I Want for Christmas Is a Clean White School." 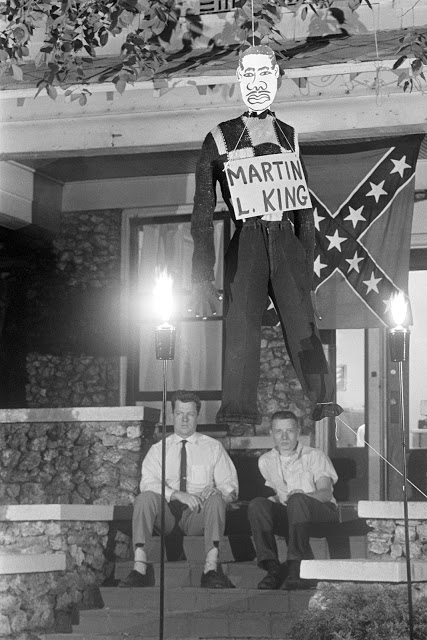 Counter-protesting against civil rights demonstrations, Edward R. Fields and James Murray, members of the National States Rights Party, hang an effigy of Martin Luther King Jr. outside the party's headquarters in Birmingham, Alabama, on May 6, 1963. 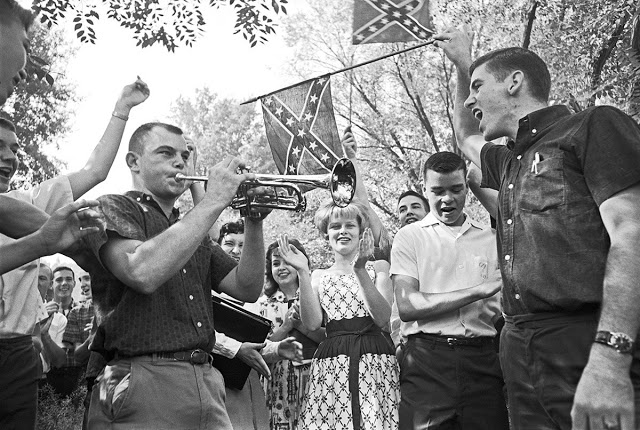 Demonstrators outside of West End High School in Birmingham, Alabama, sing songs and cheer during an anti-desegregation protest on Sept. 10, 1963. 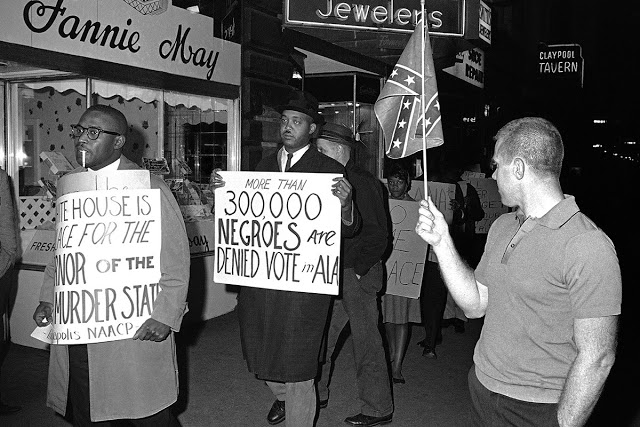 A man waves a Confederate flag before a group of demonstrators in front of an Indianapolis hotel where then-Gov. George Wallace of Alabama was staying on April 14, 1964.