30 Color Photographs of Anti-Vietnam War Protests in the U.S From the 1960s and Early 1970s

The movement against the involvement of the United States in the Vietnam War began in the U.S. with demonstrations in 1964 and grew in strength in later years. The U.S. became polarized between those who advocated continued involvement in Vietnam and those who wanted peace. Many in the peace movement were students, mothers, or anti-establishment hippies. Opposition grew with participation by the African-American civil rights, women's liberation, and Chicano movements, and sectors of organized labor.


The reasons behind American opposition to the Vietnam War fell into several main categories: opposition to the draft; moral, legal, and pragmatic arguments against U.S. intervention; and reaction to the media portrayal of the devastation in Southeast Asia. 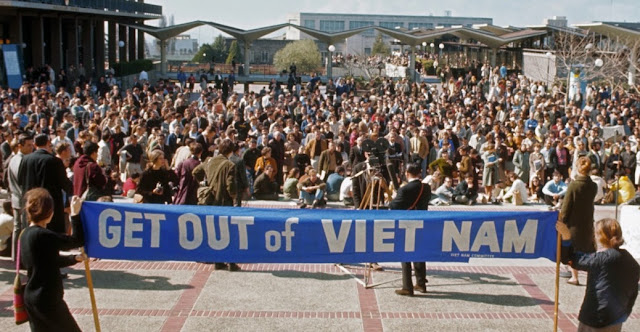 A group of female students at U.C. Berkeley demonstrate their opposition to the war, ca. 1968. The majority of the anti-war movement began on college campuses with organizations such as SDS, Students for a Democratic Society. 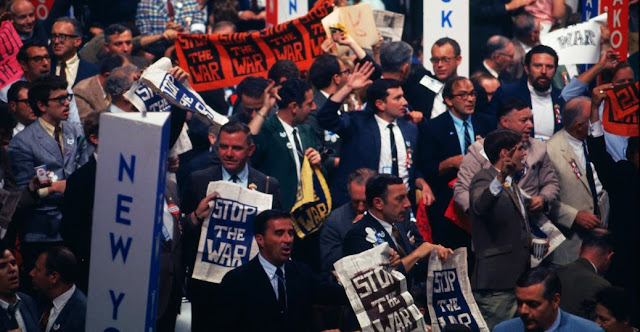 Anti-war protests rocked the 1968 Democratic Convention in Chicago, Illinois, as more than 10,000 demonstrators took to the city’s streets. Opposition to the policies of President Lyndon Johnson’s administration even spilled over to the convention hall itself, where Vice President Hubert Humphrey accepted his party’s nomination. 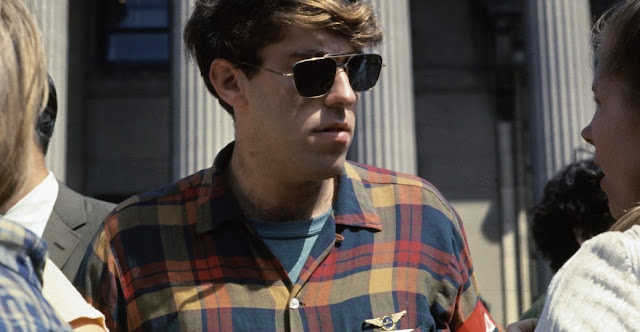 Mark Rudd, leader of Columbia University’s Students for a Democratic Society, organized the 1968 student protest that led to the occupation of the five administration buildings and the temporary shut down of the university. 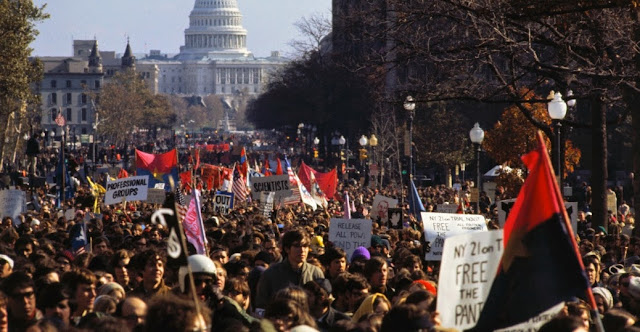 On November 15, 1969, more than 500,000 protestors flooded into Washington, D.C., for the Moratorium March—one of the largest anit-war demonstrations in U.S. history. 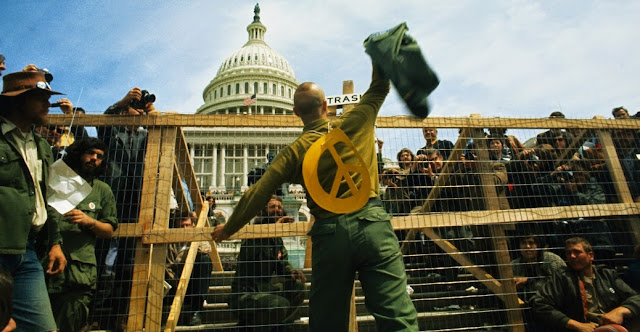 In Washington D.C., veterans protest the fighting in Indochina by discarding their medals and uniforms over the fence at the U.S. Capitol. 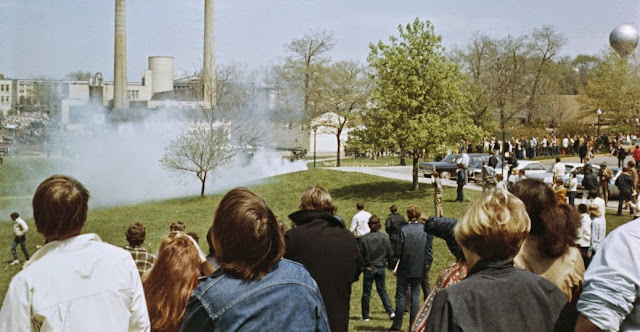 On April 30, 1970, Nixon announced an expansion of the war effort and the need to draft 150, 000 more soldiers. This resulted in massive protests on college campuses around the country 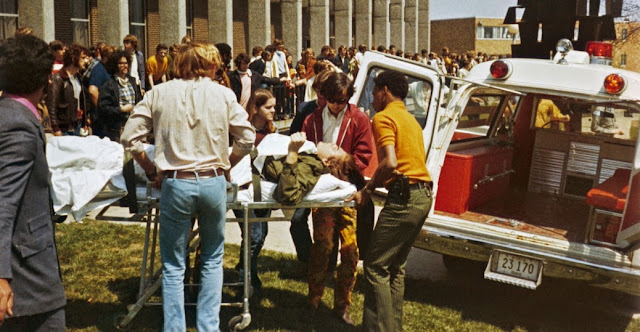 At Kent State University in Ohio the National Guard confronts protestors, after an ROTC building was set on fire. The National Guard opened fire on the students killing four and wounding eight. 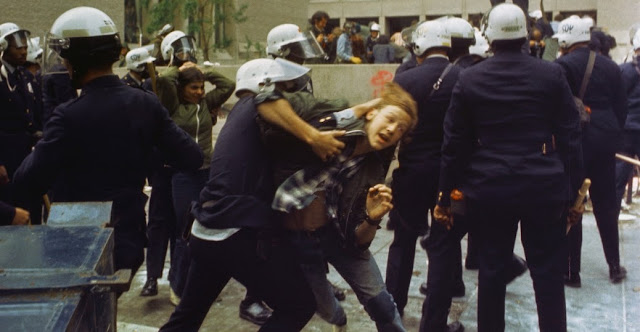 The Civil Disturbance Unit of the Washington Metropolitan police department responds to anti-war demonstrators at George Washington University in 1971. 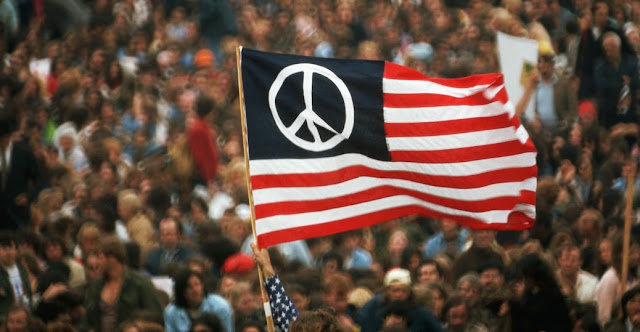 A peace sign printed on the American Flag is raised during an anti-war protest in Washington, D.C. Due, in part, to the strong anti-war sentiments, Nixon announced the end of U.S. involvement in Southeast Asia in January 1973. 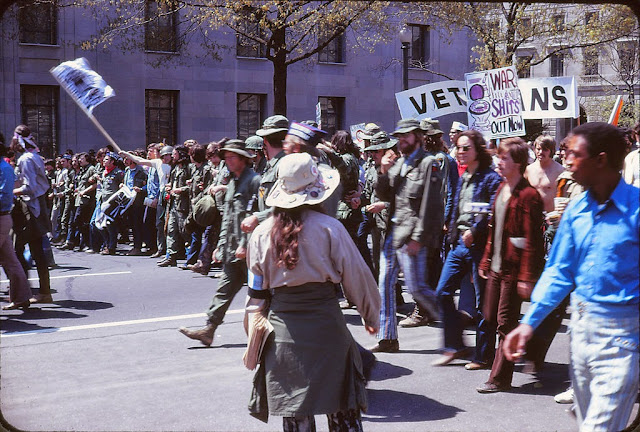 Anti-war protest against the Vietnam War in Washington, D.C. on April 24, 1971 – at the corner of Pennsylvania Avenue and 10th Street NW. 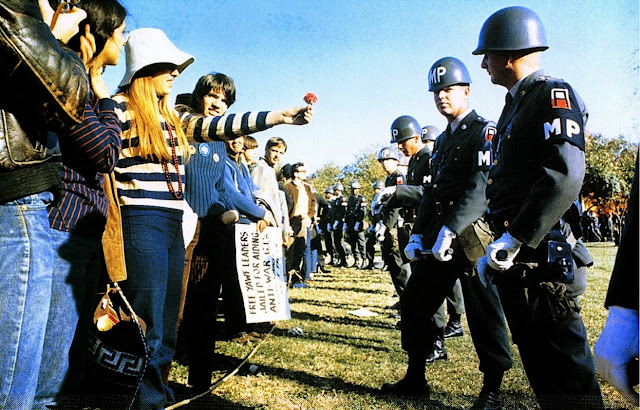 A female demonstrator offers a flower to military police on guard at the Pentagon during an anti-Vietnam demonstration. Arlington, Virginia, USA. 21 October 1967. 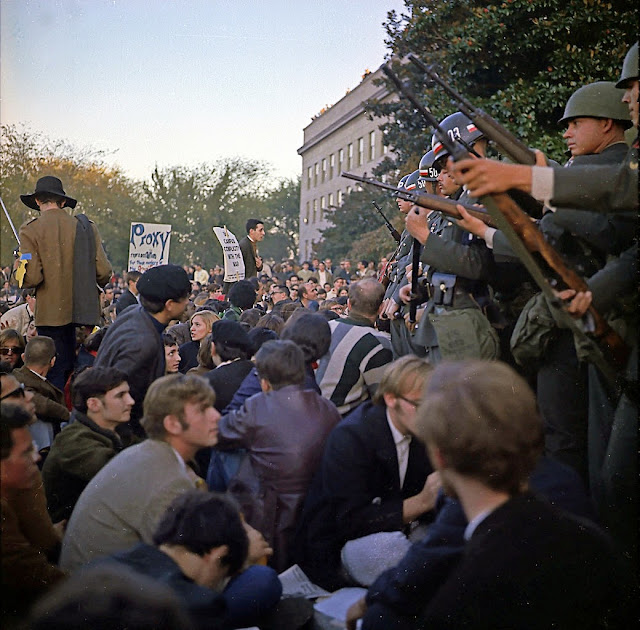 Members of the military police keep back protesters during their sit-in at the Mall Entrance to the Pentagon, on 21 October 1967. 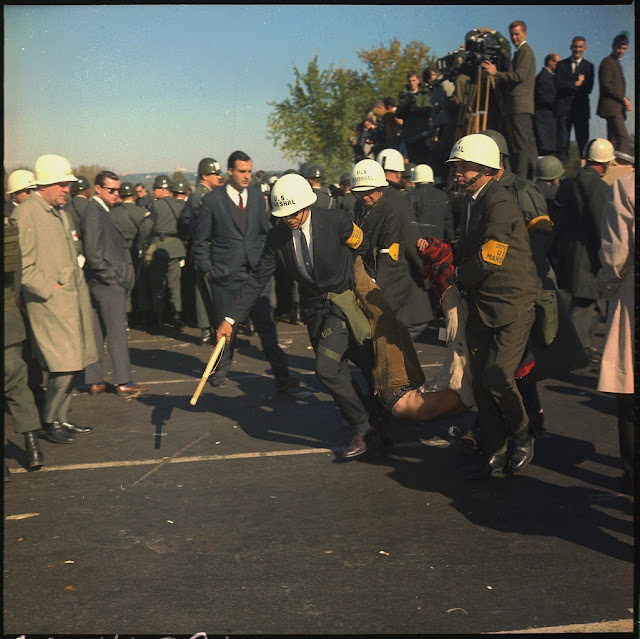 Washington D.C. Anti-Vietnam Demonstration. U.S. Marshals bodily remove one of the protesters during the outbreak of violence at the Pentagon Building, on 22 October 1967. 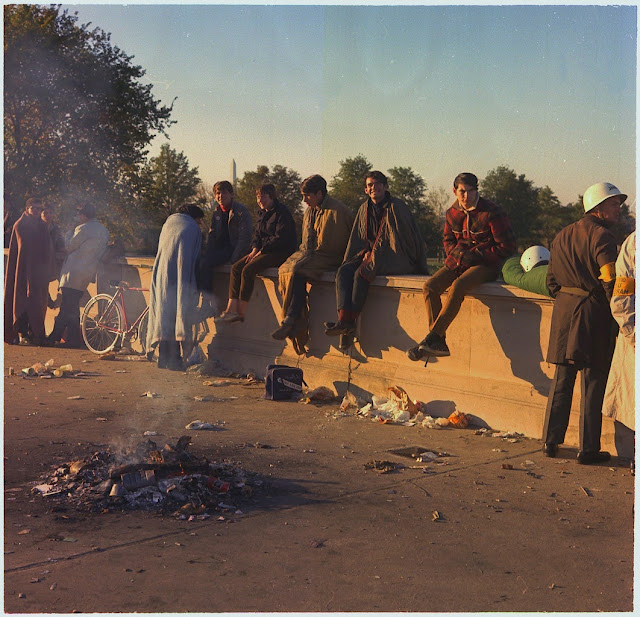 Washington, D.C. Anti-Vietnam Demonstration. Protesters sit on the wall around their bonfire after spending the night at the Pentagon's mall entrance, on 22 October 1967. 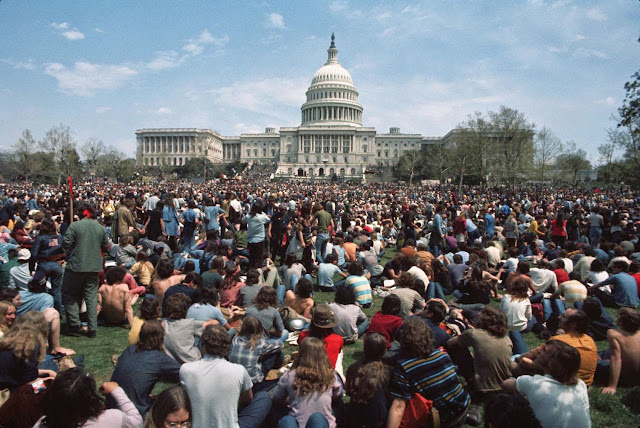 Demonstrators gather in front of Capital building for the 1971 Vietnam War Out Now protest in Washinton D.C. 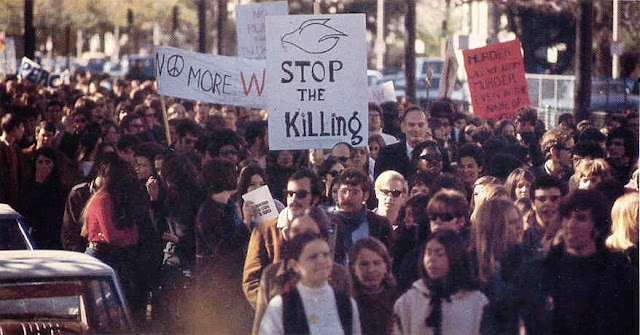 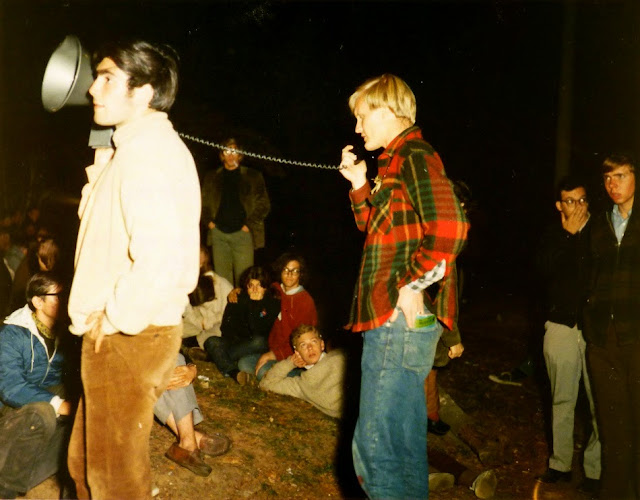 On October 21, 1967, some 35,000 anti-war protesters organized by the National Mobilization Committee to End the War in Vietnam, gathered for a demonstration at the Pentagon (the "March on the Pentagon"), where they were confronted by some 2,500 armed soldiers. The march concluded with an attempt to "exorcise" the building. 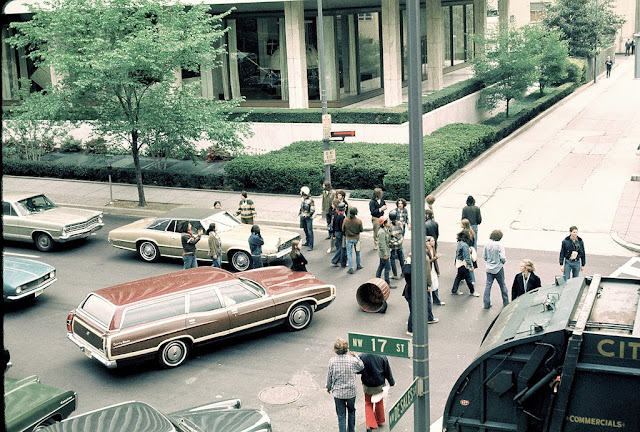 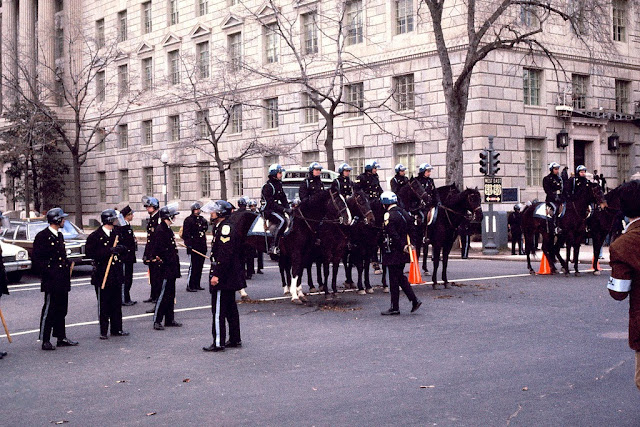 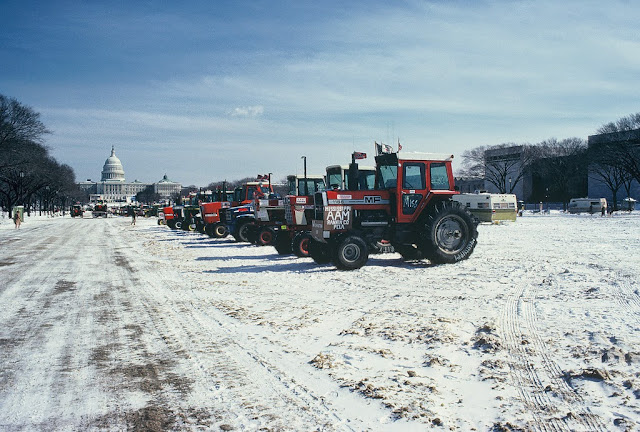 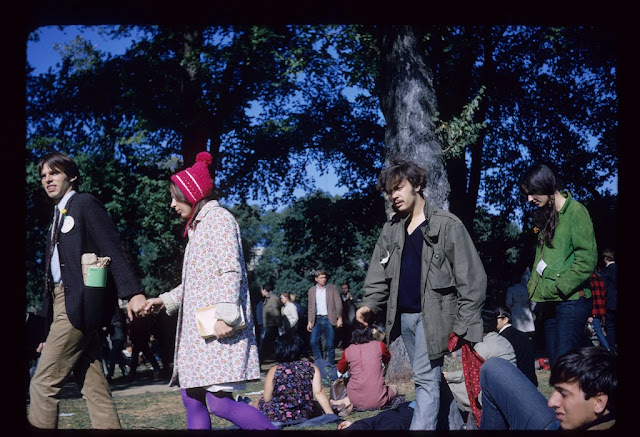 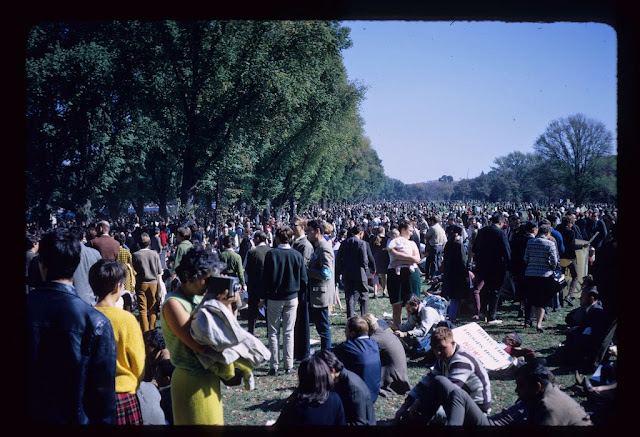 Bring the troops home now: March on Washington against the war in Vietnam, 21-22 October, 1967. 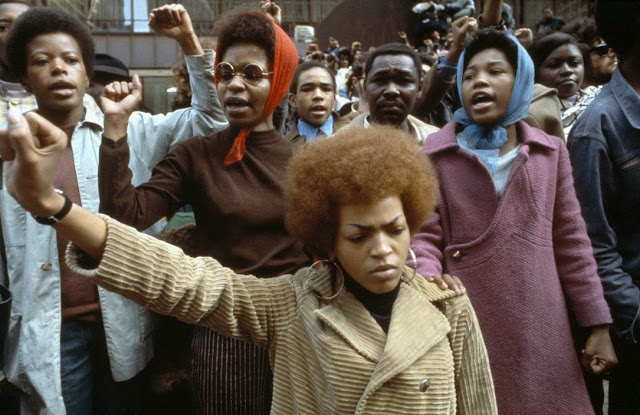 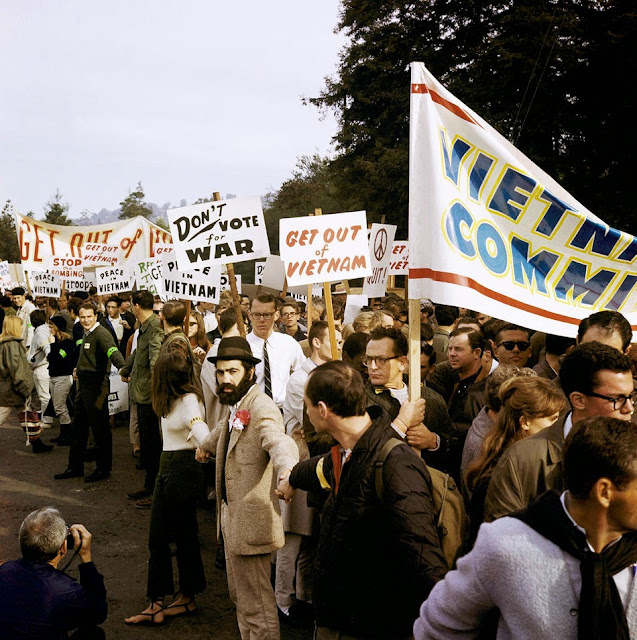 Demonstrators in Berkeley, California march against the war in Vietnam in December of 1965 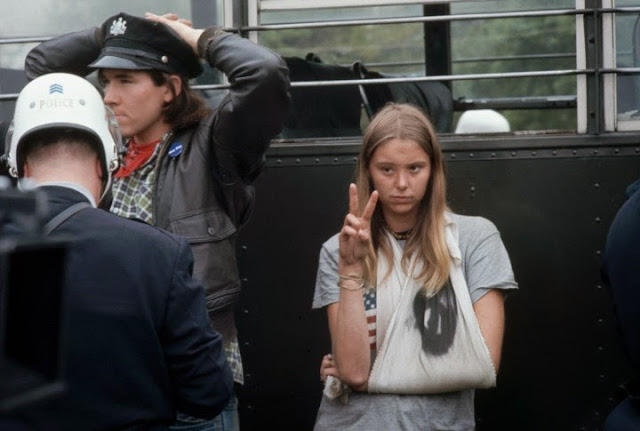 Arrest of Vietnam War protesters, May 1971. 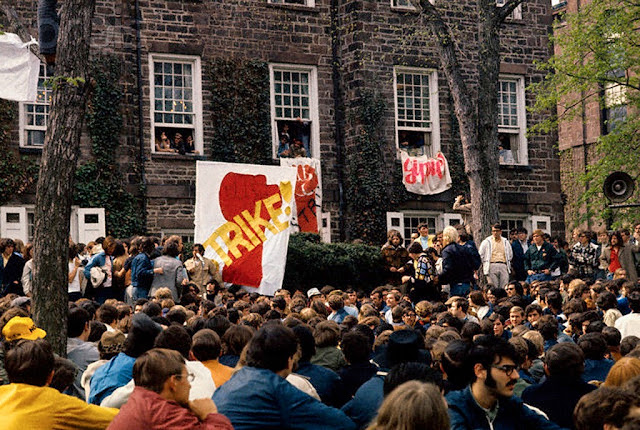 May 4, 1970 New Brunswick, NJ: Students demonstrate at Rutgers University protesting the Nixon Administration's Cambodian policy. The Rutgers demonstration is one of many being staged on university campuses across the nation and the remainder of the week. They're gathered in front of the Administration Building. 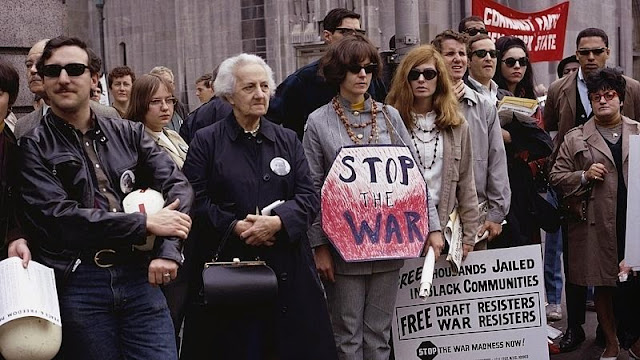 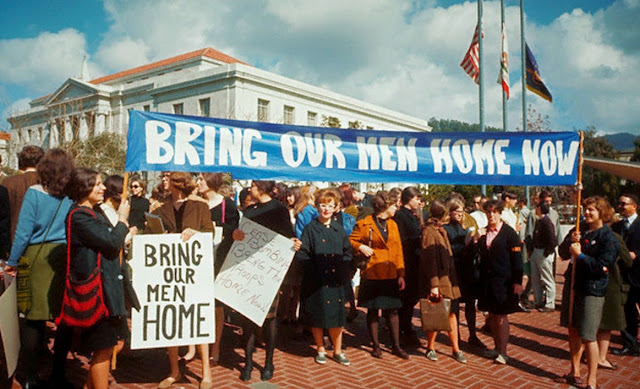 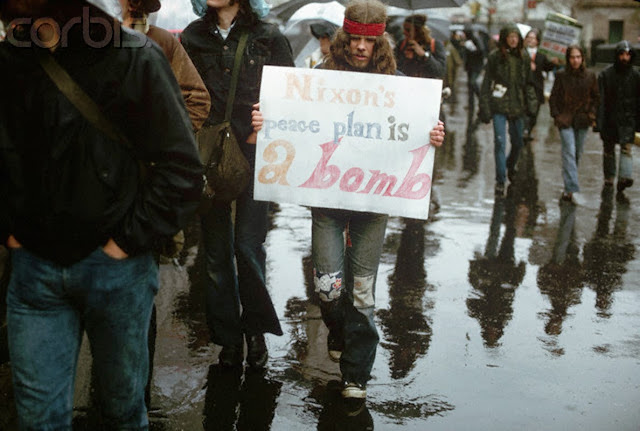 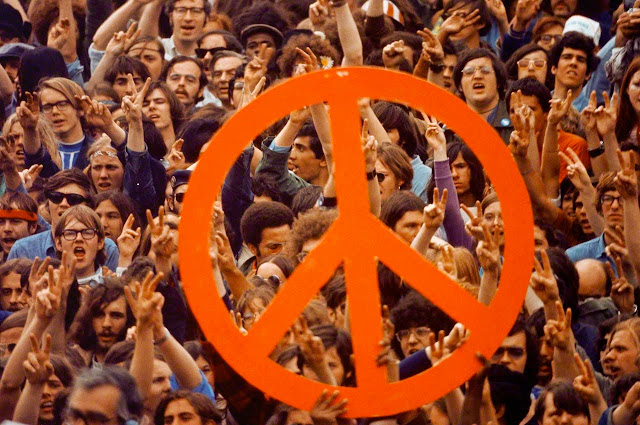 Posted by Yesterday Today at 11:09 AM