Why would a young woman leave her family, and her home – likely never seeing them again in this earthly life – to travel in sub-par quarters to become a mail-order bride? Why would a bachelor agree to marry someone he had come to know only through her letters?

The phenomenon of a courtship correspondence is a stark contrast to today’s culture of dating. Modern parallels, such as online dating, exist, but they usually facilitate an in-person meeting well before a marriage proposal The prospect of leaving one’s family, friends, and livelihood, and traveling to a different part of the country to tie the knot with someone whom they had never met in-person seems outlandish to many today. What would possess a person to take such a risk? 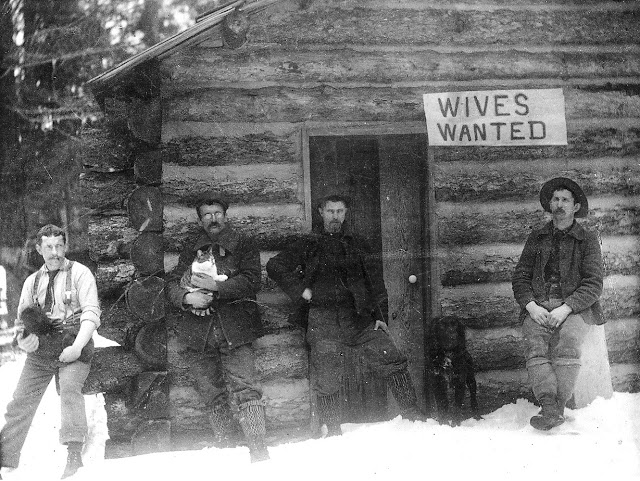 These four men in Montana (near Lake McDonald in Glacier National Park) at the turn of the 20th century advertised their want for wives on the side of a cabin. From left-to-right they were: Bill Daucks, Frank Geduhn, Esli Apgar, and Dimon Apgar. Frank, and Dimon eventually married, but not mail-order brides.

During the initial American settling of the western part of North America, it was mainly men who went out there. They went to look for gold, to start homestead farms and ranches, and to begin new lives where resources were plentiful, spaces were wide and open, and there was a lot more freedom than back east. However the many single men who went west soon found themselves to be lonely. They may have had male friends nearby, or maybe they didn’t. Either way, it was no substitute for having female companionship. Only a small number of men brought wives and/or families with them. The number of single women in the west was negligible (there were a few, but far from enough to go around compared to the men who went there on their own). It wasn’t long before men started to think of creative ways to get wives without having to travel away from their land and risk it being claimed or taken over by someone else while they were gone. 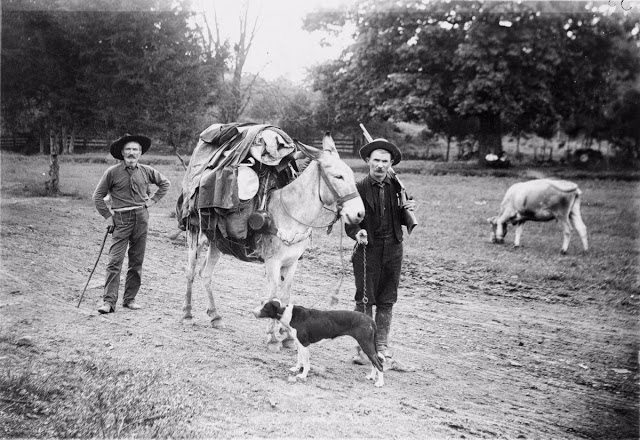 Some men wrote home asking friends and family for recommendations for single women they knew who would make good wives, and the courtship was by correspondence, until the couple decided to marry, when the woman would go west for the ceremony and to start her new life. However, a much more common scenario was the mail order bride. Men in the west advertised in eastern newspapers for wives. In the ads, they would tell a bit about themselves and what they were looking for in a wife. Interested women who met the qualifications of a particular advertiser would write back. From there, the process from first letter to marriage was much the same as for men who got wives through their social networks back home. Once in a while, a woman would advertise in a western newspaper looking for a husband, usually if she wasn’t finding anyone who was interested in her (or vice versa) at home, and the courtship process was the same as if she was answering an ad rather than writing one.

Women who answered the ads for wives in the west were those who weren’t finding men, or men of quality, at home, or those who wanted to get away from home for some reason. Reasons included having strict parents, being the subject of a scandal that was ruining their reputation, or simply wanting adventure and/or a new start after something bad happening at home. These women needed to find husbands elsewhere, in places far away from where they lived. Surprisingly, there was no shortage of women who answered these mail order bride ads. Many Old West marriages were made this way.

Other women chose to answer bachelors’ calls for correspondence simply for the fun of it. Not all of them hoped that the correspondence would lead to wedding bells, and were surprised when their pen-pal thought otherwise.Others started out with a lark and ended up with a husband. 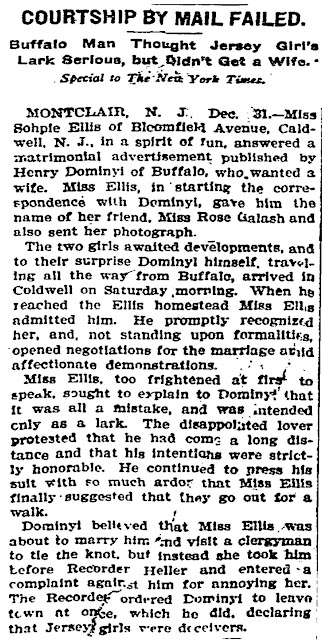 Note that this tale of an almost mail-order bride comes from New Jersey in 1907. Certainly, it defies the stereotype of women of the mid 19th century traveling to the West Coast. (“Courtship by Mail Failed.” New York Times (New York, NY), January 1, 1907) 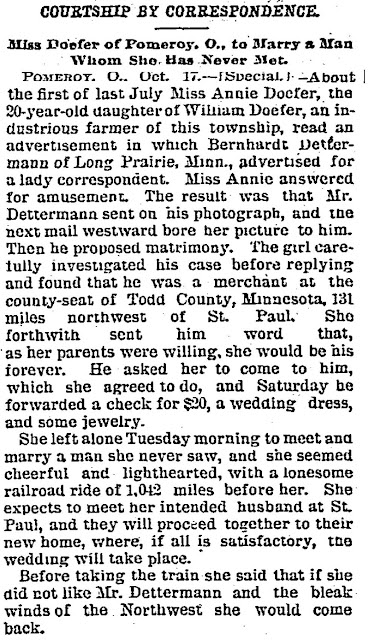 Finally, some women sought husbands by letter simply because they were lonely and found their local surroundings lacking suitable candidates for marriage. Such was the case of Ethel Moore, a 22 year old resident of Southport Maine. 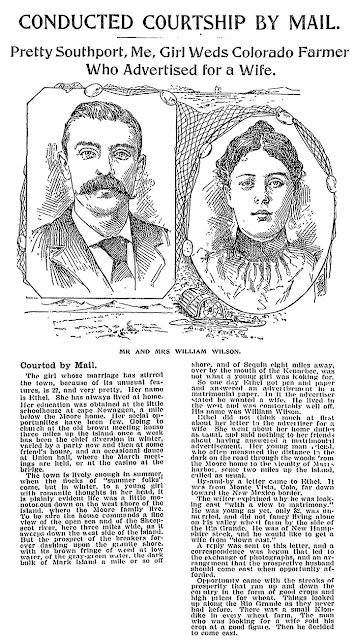 This is an excerpt from a larger article profiling Ethel Moore and William Wilson. Ethel was a member of a twelve-person fishing family on the coast of Maine. In describing the landscape, the author of this article hints that the quietness of the town contributed to Ethel's decision to respond to William's ad: 'The town is lively enough in summer when the flocks of "summer folks" come, but in winter, to a young girl with romantic thoughts in her head, it is plainly evident life was a little monotonous down on the west shore of the Island, where the Moore family live.” (“Conducted Courtship by Mail: Pretty Southport, Me, Girl Weds Colorado Farmer Who Advertised for a Wife,” Boston Daily Globe (Boston, MA), January 7, 1898)

In most cases, the marriages went smoothly, as both parties represented themselves accurately. No one wanted to travel a thousand miles or more across the continent (or wait for someone to travel that far to get to them), only to find there were lies involved that would make the marriage an unpleasant one for one or both of them. However, there were the occasional stories of mail order bride ventures gone awry.

One notable example, though by all means not the only one, is that of 22-year-old school mistress Elizabeth Berry and bachelor miner Louis Dreibelbis. Louis described himself as a lonely miner in his ad. Elizabeth was concerned about becoming a spinster, since she was still unmarried at 22, which was approaching old age in the Old West marriage market. Elizabeth packed up her things after a short correspondence with Louis and went to California to marry him. On the way, her stagecoach was robbed, but one of the three robbers allowed her to keep her luggage, which had her wedding dress and all her other belongings for her new life in it. She noticed the man had a ragged scar on one hand.

Later that day, she reached Louis’s house, and they went to the justice of the peace to get married after she got dressed for the ceremony. After they exchanged vows, and were pronounced man and wife, Elizabeth thought she recognized Louis’s voice, and saw the same ragged scar on his hand as she’d seen on the robber when he signed the marriage license. Realizing he was one of the robbers, she fled, and history does not record what became of her. It turns out Louis was indeed a miner, but he neglected to say in his ad that he supplemented his income robbing stagecoaches with a couple of his friends.

If one of your ancestors was a mail order bride, researching her history may give you an interesting story as to why she decided to become one. Learning about her life after moving to marry her new husband will also provide a really interesting family tale from a unique Old West institution.

(via Smithsonian Institution and Ancestral Findings)