In 1896 Workers Attempted to Eradicate Moth Larvae From a Large Elm Tree in Malden, Massachusetts

Medford, being one of the oldest towns in the State, had many very large elms. This was also true of Malden. It was believed by some of the residents that it would be impossible to clear the moths from these trees except by the aid of a balloon. The largest tree in the infested region was selected for trial of the possibility of extermination. This tree is situated on the property of the Messrs. Dexter of Malden, and stands in front of the old Dexter mansion. The tree has been owned by this family for more than two hundred years. If not the largest tree in the State, it is one of the largest. 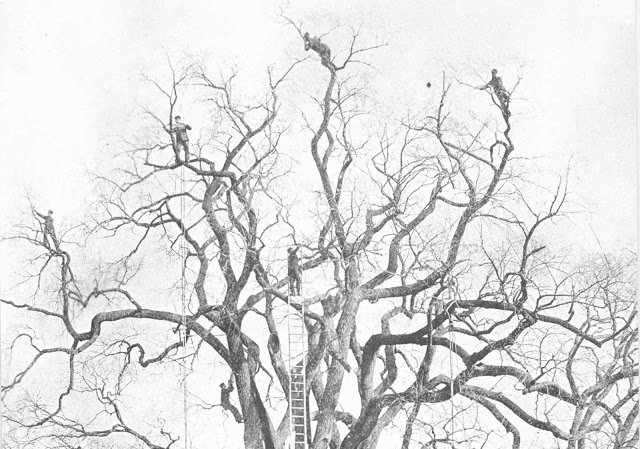 Early in 1891 an attempt was made to clear the moths from the tree, and a gang of four men, who had had some experience, went to work upon it to destroy the eggs of the moth. After working for several days upon the tree they reported it cleared. Another gang of men was put at work upon the tree, and six hundred additional egg clusters were discovered. Notwithstanding this, caterpillars appeared in the spring upon the tree. It was then sprayed thoroughly, an extension ladder sixty-five feet in length being used, together with several additional ladders placed in various parts of the tree. Later in the season all the holes in the limbs were covered or filled, and the few egg-clusters found were treated with creosote oil.

In 1892 the tree was banded with tarred paper, which was kept constantly moist with a mixture of tree ink, tar and oil. A few caterpillars were found, however, on the tree, having hatched probably from scattered eggs left in the crevices in the bark.

In 1893 no caterpillars appeared, and no form of the moth has been found since 1892 upon the tree. In the inspections of the tree every care has been taken to go over it thoroughly, from its highest branches to the base of the trunk. The dead limbs have been removed and holes have been covered, but no other work has been necessary at the regular inspections. Plate XXXVI shows men at work in the inspection of the tree. 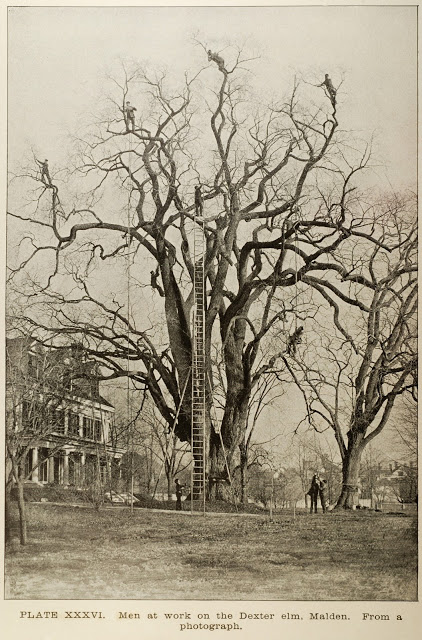 The Dexter elm has the following dimensions: circumference at base, 29 feet; circumference six feet from the ground, 21 feet; height, 110 feet; spread from north-east to south-west, 104 feet. Some of the branches of the tree are 3 feet in diameter.