The Forgotten Story of Audrey Munson, America’s First Supermodel Who Ended Up Living in Psychiatric Asylum for 65 Years

You may never have heard of Audrey Munson, but you’ve probably seen her face if you’ve spent any time in New York. Its similarity can be seen across the city, from Adolph Weinman’s golden figure on top of the Manhattan Municipal Building to the New York Public Library’s carved stone façade on Fifth Avenue. 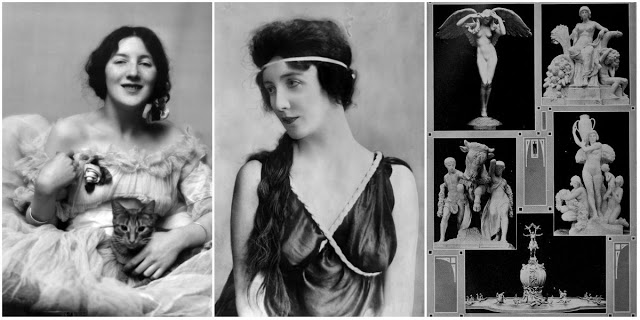 Munson posed for all these Panama-Pacific International Exhibition sculptures. 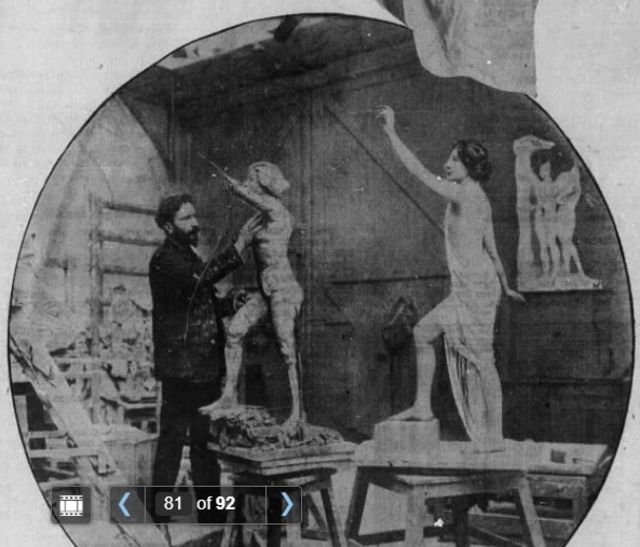 The distinguished sculptor, Karl Bitter, working in his studio upon his famous statue Peace, with Miss Munson as his model. 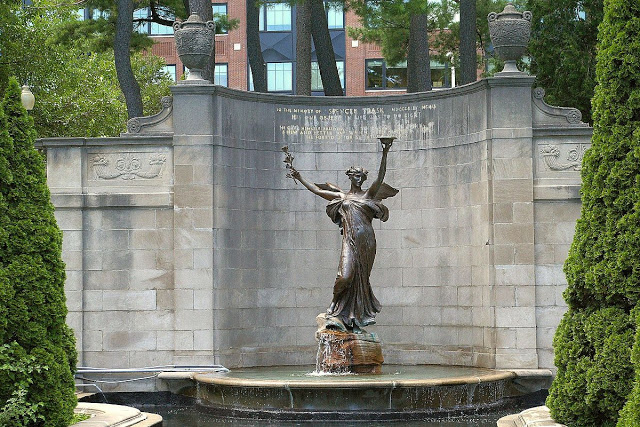 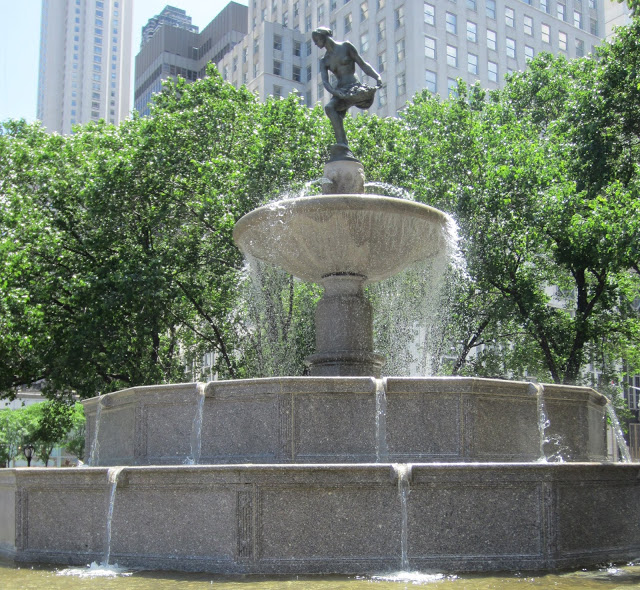 Plaza Hotel Fountain: Pomona. Pomona was a 24 in (61 cm) plaster maquette at the time of Bitter’s April 9, 1915 death. Bitter’s widow asked Isidore Konti to complete the work, which was dedicated in May 1916. Munson was publicly credited as the model for Pomona as early as August 1916. Actress Doris Doscher later claimed to have been the model for Pomona. (Bitter may have used more than one model, or Konti may have used a different model.) 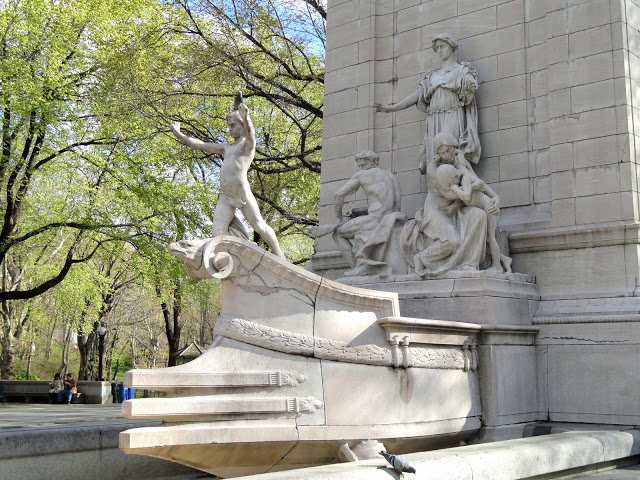 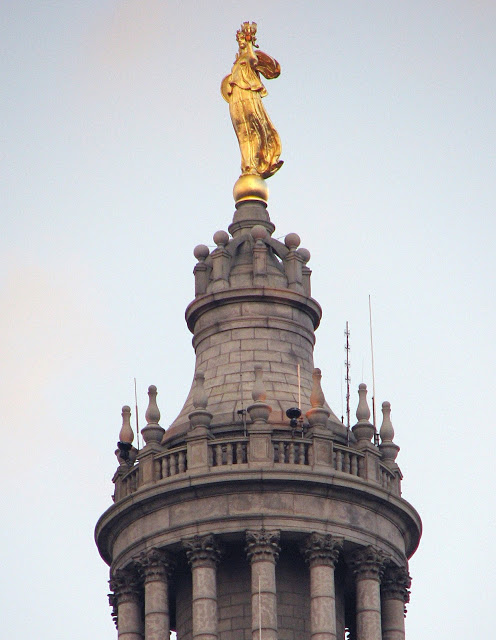 Civic Fame Statue, on the top of the Municipal Bulding, Manhattan, New York.

Born in 1891, in Rochester, Audrey Munson is regarded as “America’s First Supermodel.” In her time, she was variously known as “Miss Manhattan”, the “Panama–Pacific Girl”, the “Exposition Girl” and “American Venus.” She was the model or inspiration for more than twelve statues in New York City, and many others elsewhere. Munson was also the first American actress to appear fully nude in film, in Inspiration (1915), the first of her four silent films.

Munson’s career as an artist’s muse began when she moved to New York with her recently divorced mother in 1909. She was 17 and enrolled in music school with the hope of becoming an actress, but Munson was spotted on the street by photographer Felix Benedict Herzog.

Identifying her classic beauty and ease in front of the camera, the photographer introduced Munson to sculptor Isidore Conti who said he would only work with her if she posed in the “altogether” or, in other words, nude. 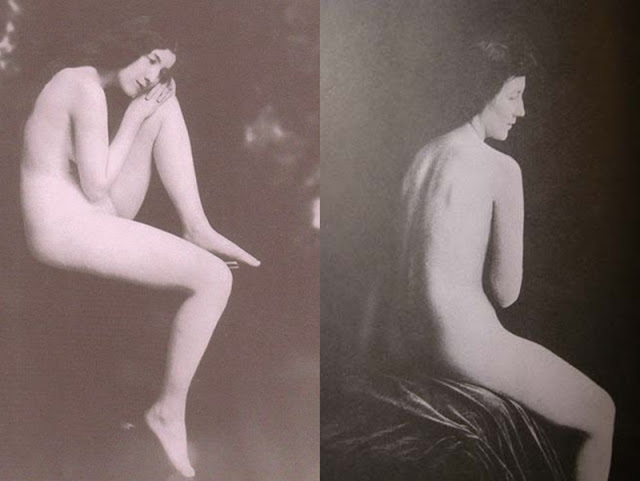 It was this partnership that acted as the launchpad for Munson’s career as she went on to meet more artists, sitting for them and gaining more popularity as a model from studio to studio. Gradually her likeness started appearing all around New York, earning her the status of ‘Miss Manhattan’.

From sculpture to sculpture, her form differs; certain artists perceived Munson as slender whereas others reimagined her as a slightly fuller figure. What remains, however, is her apparent poise and identifiable facial expressions. Munson also could hold poses for hours at a time, and while doing so, would get to know the temperament and technique of each artist she modeled for.

Despite having to stay still for most of the day, Munson was by no means passive in her approach to work, and she saw her role as collaborative – taking an active interest in the previous creations of artists to inform the way she modeled. As Munson said: “Every model who is a real success must study the work of the person she is with.”

Following the 1915 International Exposition in San Francisco, Munson decided to become an actress. Her on-screen career was short-lived, however: she was repeatedly cast as a still-life model and was even given an acting double in some films to ensure she remained in non-moving roles. Rather tellingly, and unfairly, she became best known for being the first actress to appear nude in a movie (1915’s Inspiration), rather than for her essential role in the creative process, and her work as an advocate for the rights of creative women. 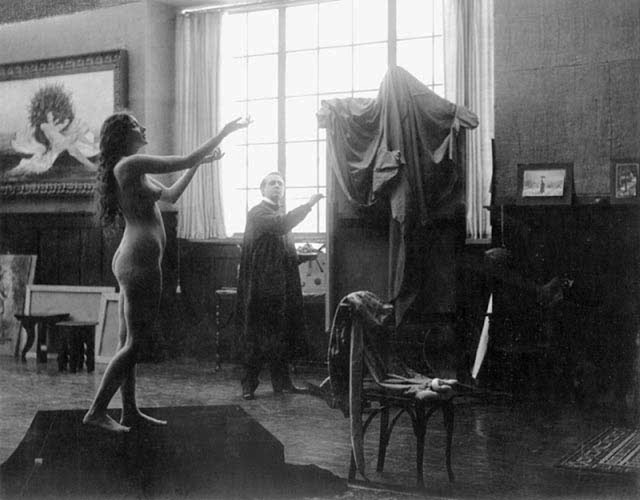 Audrey Munson and Thomas A. Curran in Inspiration (1915). 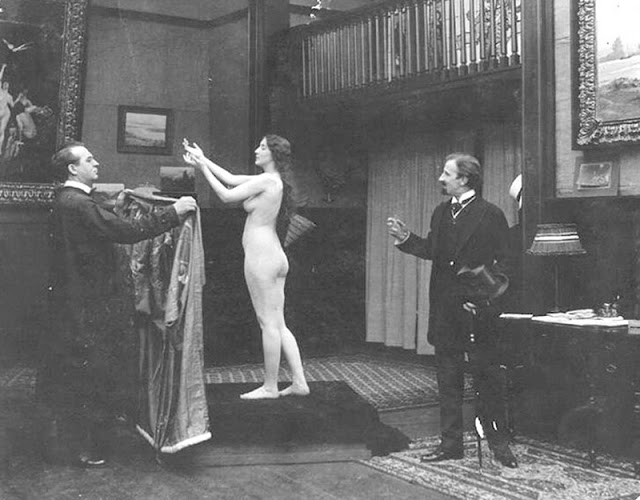 Audrey Munson as The Model, with Thomas A. Curran (left) as The Artist in Inspiration (1915).

Her second film, Purity (1916), made in Santa Barbara, California, is the only one of her films to survive, being rediscovered in 1993 in a “pornography” collection in France and acquired by the French national cinema archive. Her third film, The Girl o’ Dreams, also made in Santa Barbara, was completed by the fall of 1916 and copyrighted on December 31, 1918, but appears never to have been released.

Munson returned to the East Coast by train via Syracuse in December 1916 and became involved with high society in New York and Newport, Rhode Island. There are accounts her mother insisted she marry “Comstock Lode” silver heir Hermann Oelrichs Jr., then the richest bachelor in America, but there is no record of Audrey Munson’s making this claim herself. On January 27, 1919, she wrote a rambling letter to the US State Department denouncing Oelrichs as part of a pro-German network that had driven her out of the movie business. She said she planned to abandon the United States to restart her movie career in England.

In 1919 Audrey Munson was living with her mother in a boarding house at 164 West 65th Street, Manhattan, owned by Dr. Walter Wilkins. Wilkins fell in love with Munson, and on February 27 murdered his wife, Julia, so he could be available for marriage. Munson and her mother left New York, and the police sought them for questioning. After a nationwide hunt, they were located. They refused to return to New York, but were questioned by agents from the Burns Detective Agency in Toronto, Ontario, Canada. The contents of the affidavits they supplied have never been revealed, but Audrey Munson strongly denied she had any romantic relationship with Dr. Wilkins. Wilkins was tried, found guilty, and sentenced to the electric chair. He hanged himself in his prison cell before the sentence could be carried out.

As a direct consequence or not, the Wilkins killing marked the end of Munson’s ten-year modeling career. She continued to seek regular newspaper coverage. By 1920 Munson, unable to find work anywhere, was reported as living in Syracuse, New York, supported by her mother, who sold kitchen utensils door to door. In November 1920 she was said to be working as a ticket-taker in a dime museum.

From January through May 1921 a series of twenty serialized articles ran in Hearst’s Sunday Magazine in dozens of Sunday newspaper supplements, under Munson’s name, the whole series entitled By the ‘Queen of the Artists’ Studios’. The twenty articles relate anecdotes from her career, with warnings about the fates of other models. In one she asked the reader to imagine her future:
What becomes of the artists’ models? I am wondering if many of my readers have not stood before a masterpiece of lovely sculpture or a remarkable painting of a young girl, her very abandonment of draperies accentuating rather than diminishing her modesty and purity, and asked themselves the question, “Where is she now, this model who was so beautiful?”
In February that year, agent-producer Allen Rock took out advertisements showing a $27,500 check he said he had paid Munson to star in a fourth film titled Heedless Moths based on these writings. She later said the $27,500 check was just a “publicity stunt,” and she filed suit against Allen Rock. Those proceedings revealed that the twenty articles had been ghostwritten by journalist Henry Leyford Gates.

In the summer of 1921 Munson conducted a nationwide search, carried by the United Press, for the perfect man to marry. She ended the search in August claiming she didn’t want to get married anyway. On October 3, 1921 she was arrested at the Royal Theater (later the Towne Theater) in St. Louis on a morals charge related to her personal appearance with the film Innocence, in which she had a leading role. She and her manager, independent film producer Ben Judell, were both acquitted. Weeks later she was still appearing in St. Louis, along with screenings of Innocence, enacting “a series of new poses from famous paintings”.

On May 27, 1922, Munson attempted suicide by swallowing a solution of bichloride of mercury.

On June 8, 1931, her mother petitioned a judge to commit her to a lunatic asylum. The Oswego County judge ordered Munson be admitted into a psychiatric facility for treatment. She remained in the St. Lawrence State Hospital for the Insane in Ogdensburg, where she was treated for depression and schizophrenia, for 65 years, until her death.

For decades she had no visitors at the asylum, but she was rediscovered there by a half-niece, Darlene Bradley, in 1984, when Munson was 93. Munson died February 20, 1996, at the age of 104. She was buried without a gravestone of her own in the Munson family plot in New Haven Cemetery, New Haven, New York. In 2016, 20 years after her death, her family decided to add a simple tombstone for what would have been her 125th birthday. 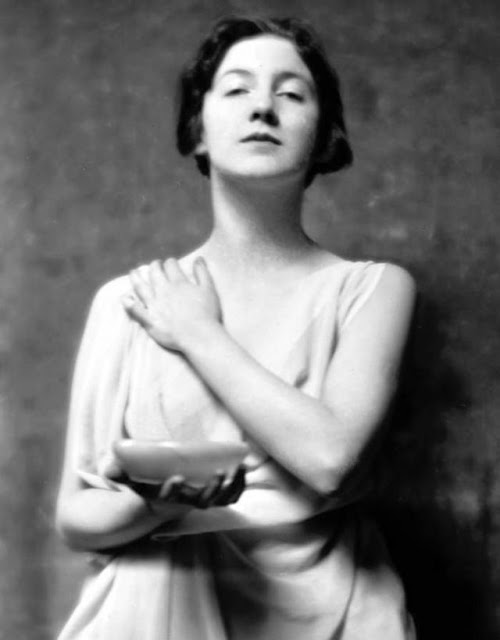 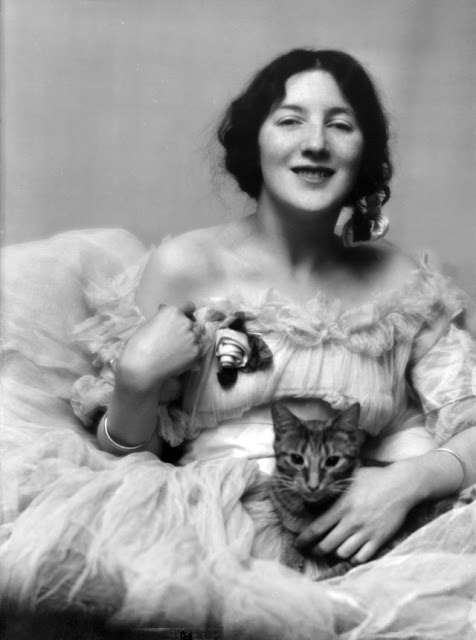 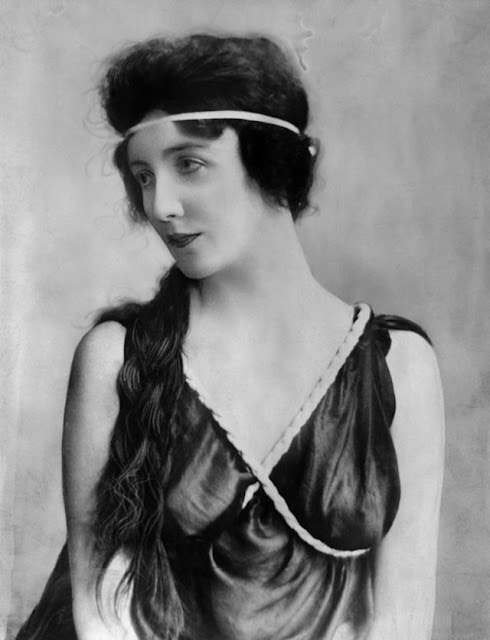 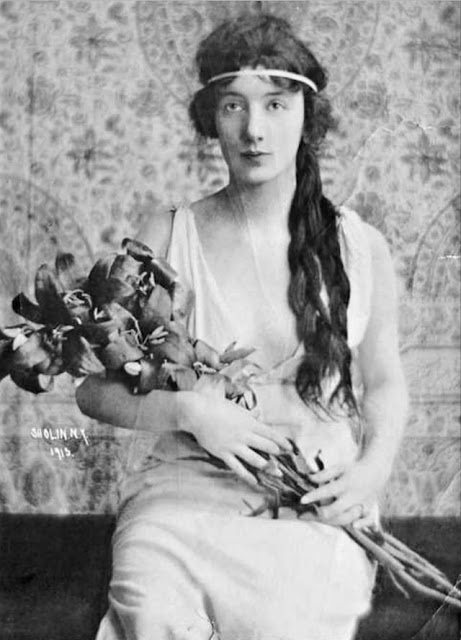 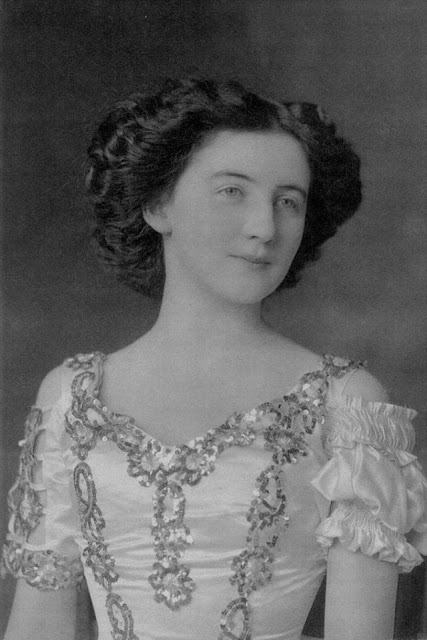 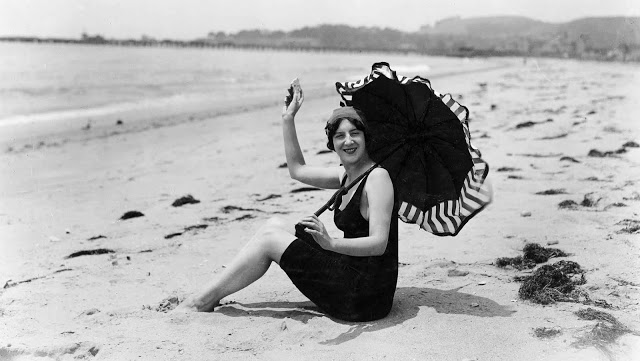 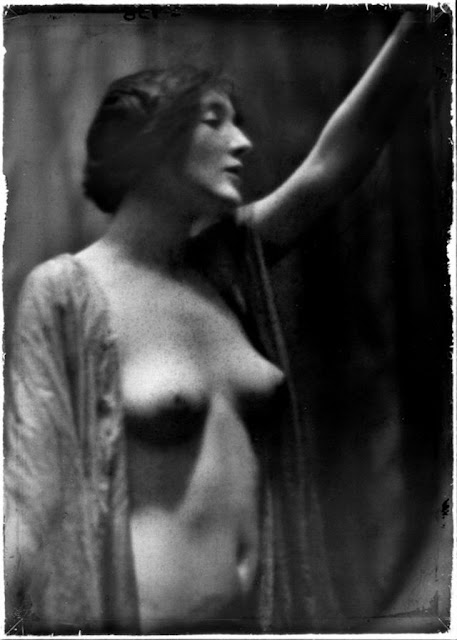 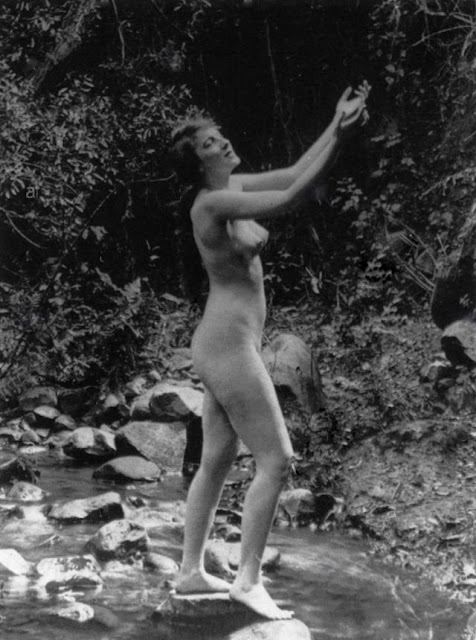 Posted by Yesterday Today at 3:02 PM