The Story Behind the Only Known Photograph of Marilyn Monroe and John F. Kennedy Together

Fifty-seven years ago, on Aug. 5, 1962, Marilyn Monroe died at the age of 36 of an overdose in her Los Angeles home. Just three months prior to her death, Monroe, dressed in a skin-tight, nude-colored dress, sang “Happy Birthday” to President John F. Kennedy at Madison Square Garden ten days before his 45th birthday.

That now legendary performance on May 19, 1962 led to what is believed to be the only known photograph of Monroe and Kennedy together. 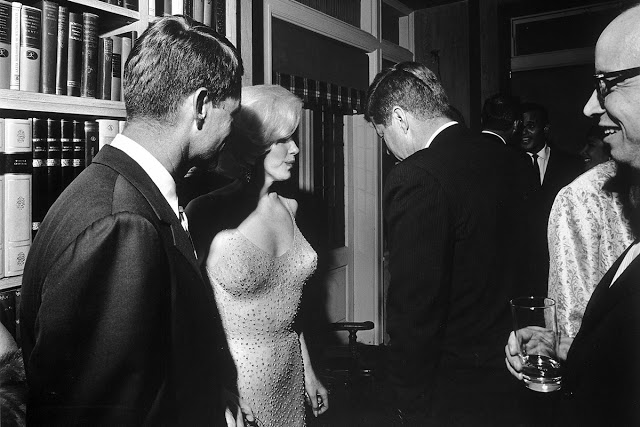 The image, shown here, was taken that night at an after-party at the Manhattan townhouse of Hollywood exec Arthur Krim, by official White House photographer Cecil Stoughton.

Also seen in the photo are Attorney General Robert F. Kennedy, on the left; Harry Belafonte, who also sang that night, standing in the back, and historian Arthur Schlesinger, Jr., the smiling man wearing glass on the right.

“It was Marilyn who was the hit of the evening,” according to TIME’s recap of the concert in 1962. “Kennedy plainly meant it when he said, ‘I can now retire from politics after having had Happy Birthday sung to me in such a sweet, wholesome way.'”

Stoughton had been instructed not photograph Monroe with the president, but he managed to sneak this shot. Out of respect for Jackie Kennedy, he kept the photograph secret.

Schlesinger later wrote: “The image of this exquisite, beguiling and desperate girl will always stay with me. I do not think I have seen anyone so beautiful; I was enchanted by her manner and her wit, at once so masked, so ingenuous and so penetrating. But one felt a terrible unreality about her - as if talking to someone under water. Bobby and I engaged in mock competition for her.”

That night’s performance added fuel to the rumors that Monroe was having affairs with both Kennedy brothers.

“It was pretty clear that Marilyn had had sexual relations with both Bobby and Jack,” James Spada, one of her biographers, told People on the 50th anniversary of her death.

According to another biographer, Donald Spoto, Monroe and JFK met four times between October 1961 and August 1962.

Her masseur Ralph Roberts claimed their only “sexual encounter” took place in a bedroom at Bing Crosby’s home on March 24, 1962, just two months before Monroe’s performance at MSG. “Marilyn gave me the impression that it was not a major event for either of them: it happened once, that weekend, and that was that,” said Roberts.

And yet, especially given Monroe’s death and Kennedy’s assassination not too long after, the idea of their relationship still holds its grip on many Americans’ imaginations.

A print of the famous photo was sold for $32,512.80 at an auction at Lelands on August 17, 2018. It is the only surviving version of the photo that Stoughton printed himself from the original negative. (A copy of the photo is part of the Life Images Collection.)