Shown with Grant Wood’s American Gothic (1930), one of the most famed U.S. paintings of its generation, were the models who posed for it, Nan Wood Graham, the painter’s sister, wife of an oil-station operator, and Dr. B. H. McKeeby, a dentist. 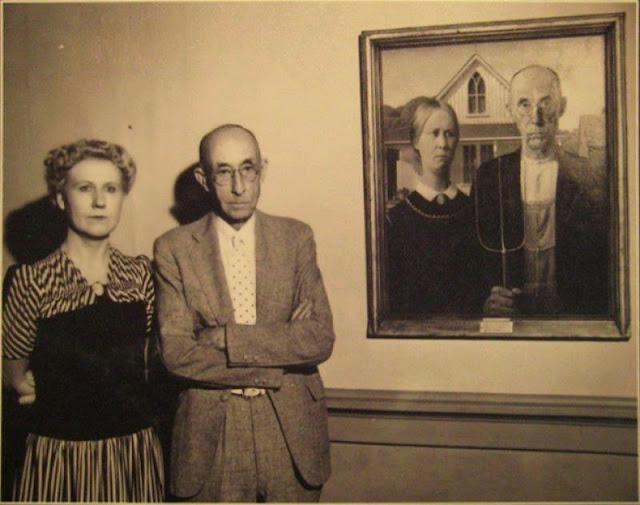 American Gothic is a painting by Grant Wood currently in the collection of the Art Institute of Chicago. Wood’s inspiration came from what is now known as the American Gothic House in Eldon, Iowa, and a decision to show the house along with “the kind of people I fancied should live in that house.”

The painting shows a farmer standing beside his daughter. The figures were modeled after the artist’s sister and their dentist. The woman is dressed in a colonial print apron evoking 19th-century Americana, and the couple are in the traditional roles of men and women, the man’s pitchfork symbolizing hard labor, and the flowers over the woman’s right shoulder suggesting domesticity.

American Gothic is one of the most familiar images in 20th-century American art and has been widely parodied in American popular culture.