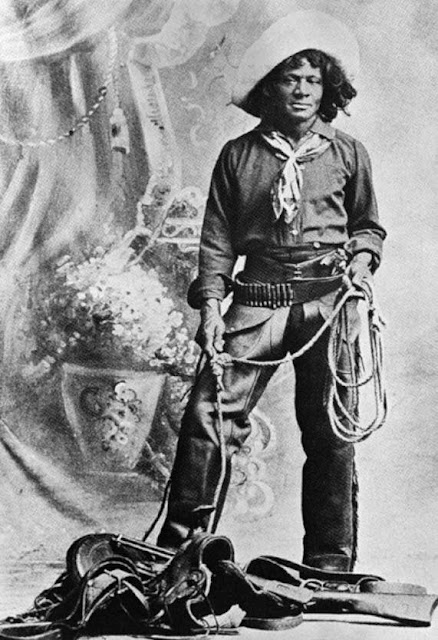 Mounted on my favorite horse, my … lariat near my hand, and my trusty guns in my belt … I
felt I could defy the world.

Thousands of black cowboys drove cattle up the Chisholm Trail after the Civil War, but only
Nat (pronounced Nate) Love wrote about his experiences. Due to this, Love's exploits would
make him one of the most famous black cowboys in post-Civil War America.

Nat Love was born in June 1854 as a slave on Robert Love’s plantation in Davidson County,
Tennessee. His father was a slave foreman on the plantation's fields, and his mother the
head of its kitchen. He was looked after primarily by an older sister when he was young,
but she, like her mother, worked in the kitchen so Nat basically looked after himself.
Despite the fact that black literacy was banned by law, Nat learned to read and write as a
child with the help of his father, Sampson.

When slavery ended, Love's parents stayed on the Love plantation as sharecroppers,
attempting to raise tobacco and corn on about 20 acres, but Sampson died shortly after the
second crop was planted. In order to keep the farm going for his family, young Nat took
another job on a neighboring farms to help out. During this time he developed a keen skill
for breaking horses which would soon come in handy to him. After a period of working extra
odd jobs in the area Nat won a horse in a raffle, and then promptly sold the beast back to
its original owner for $50. He would use this money to leave town and, at the age of 16,
after leaving his family in an uncle's care, he headed West.

Nat's first stop was Dodge City, Kansas where he came across the crew of the Texas Duval
Ranch (located on the Palo Duro River in the Texas Panhandle). Having just brought a herd
to the Kansas railhead, the Cowboys were having a leisurely breakfast when Nat decided to
join them. In the range-cattle industry 25 percent of cowboys were black. Usually former
slaves many black men had gained experience in cattle handling and horse-breaking. While
discrimination was still prevalent, it was not as bad as other industries and a black man
was able to generally be treated equal to white men in terms of pay and responsibilities.
So it was a not un-toward of Nat to present himself to the trail boss asking for a job. The
trail boss agreed to give the young man a job if he was able to break a tough horse called
"Good Eye". The wildest horse in the outfit, Nat would later say it was the toughest ride
he’d ever had. But ride the horse he did and was given the job with the Duval Ranch at $30
a month. 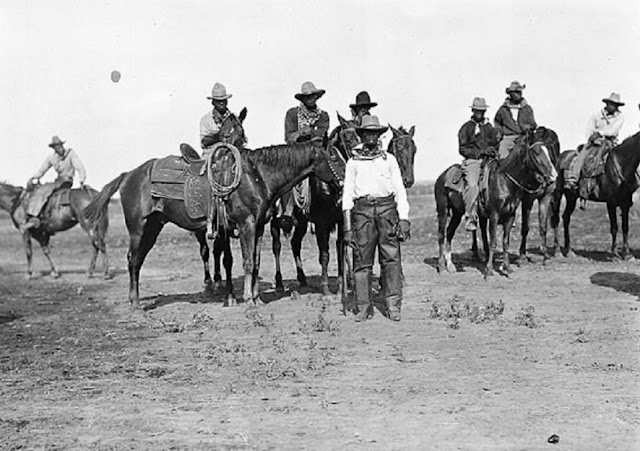 Black Cowboys of the Wild West

According to his autobiography, Love fought cattle rustlers and endured inclement weather.
He trained himself to become an expert marksman and cowboy, for which he earned from his
co-workers the moniker "Red River Dick." He soon became known as one of the best all-around
cowboys in the Duval outfit. Eventually he became a buyer and their chief brand reader. In
this capacity, he was sent to Mexico on several occasion and soon learned to speak Spanish
fluently.

By 1872, After three years with the Duval Ranch, Love decided to head off to Arizona, where
he went to work for the Gallinger Ranch on the Gila River. There he traveled many of the
the major western trails, sometimes working in dangerous situations in Indian battles and
fighting off rustlers and bandits. He wrote in his autobiography that while working the
cattle drives in Arizona he met Pat Garrett, Bat Masterson, Billy the Kid, and others as
well as seeing a soon-after view of the Custer battlefield in 1876.

In the spring of 1876, the Gallinger outfit were given a herd of three thousand steers to
deliver to Deadwood, South Dakota. When they arrived there on July 3rd, the locals were
busy preparing for a 4th of July celebrations. One of the many organized events included a
“cowboy” contest with a $200 cash prize to the winner. Love entered the contest and he
subsequently won the rope, throw, tie, bridle, saddle, and bronco riding contests, thus
taking with him the grand prize. It was at this rodeo that he claims friends and fans gave
him the nickname "Deadwood Dick." He became known as DD all over the West, “entering into
dime novels as a mysteriously dark and heroic presence”, says his autobiography.

Love writes that in October 1877 he was captured by a band of Pima Indians while rounding
up stray cattle near the Gila River in Arizona. He claimed in his autobiography: “I carry
the marks of fourteen bullet wounds on different parts of my body, most any one of which
would be sufficient to kill an ordinary man, but I am not even crippled.”  Several of the
aforementioned bullet wounds were received in his fight with the Native Americans while
trying to avoid capture. Love wrote that his life was spared because the Indians respected
his heritage, a large portion of the band themselves being of mixed blood. The Pima nursed
him back to health, wishing to adopt him into the tribe. In spite of the warmth shown to
him, Love writes, he stole a pony and escaped into west Texas.

By 1889 Nat had decided to leave the cowboy life and settle down and get married. The next
year he took a job in Denver, Colorado as a Pullman porter on the Denver and Rio Grande
Railroad. As such, he worked on the routes west of Denver and moved his family several
times to Wyoming, Utah, and Nevada before finally settling down in southern California. 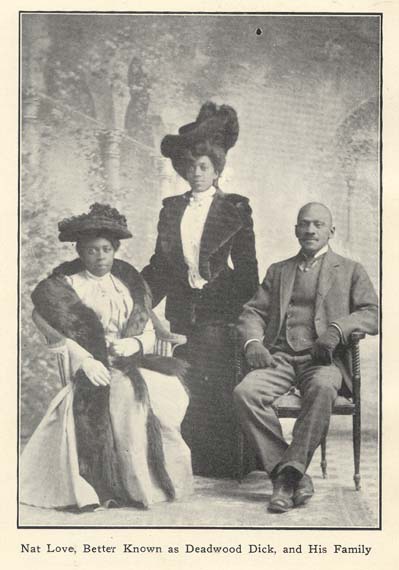 In 1907, Nat Love published his autobiography, The Life and Adventures of Nat Love, Better
Known in the Cattle Country as “Deadwood Dick.”  “Written with an air of braggadocio,
Love’s story is, in places, of questionable veracity. Nevertheless, it is a charming
first-hand account of the life of one cowboy that emphasizes the necessity of cooperation
and camaraderie in the performance of work on the trails, ranges, and ranches of the cattle
kingdom,” writes American Black History. Love spent the last part of his life as a courier
and guard for a Los Angeles securities company. 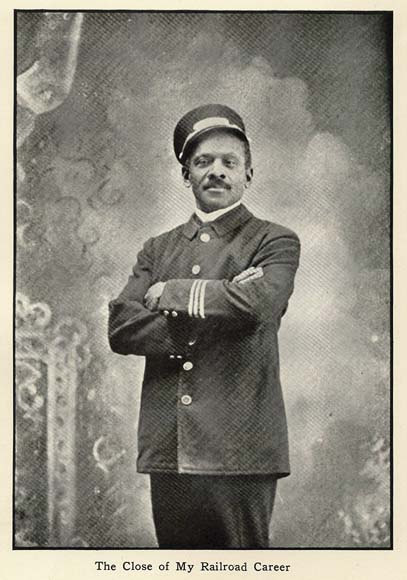 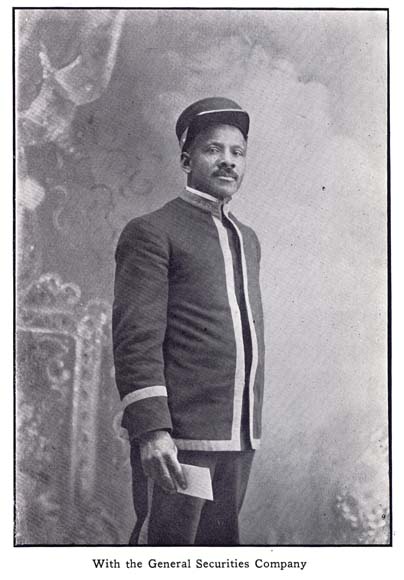 Nat Love, America’s most famous black cowboy, passed away at age 67 in 1921 in Los Angeles,
California. 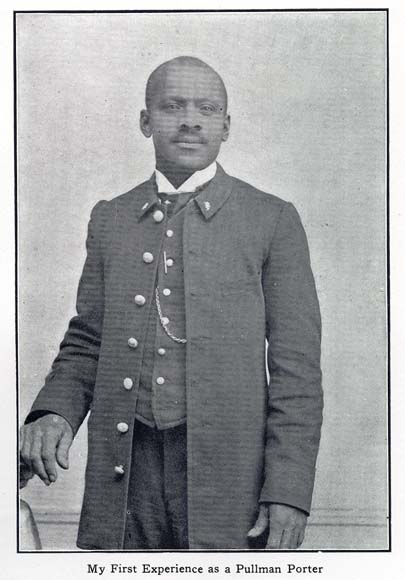 Posted by Yesterday Today at 9:56 AM