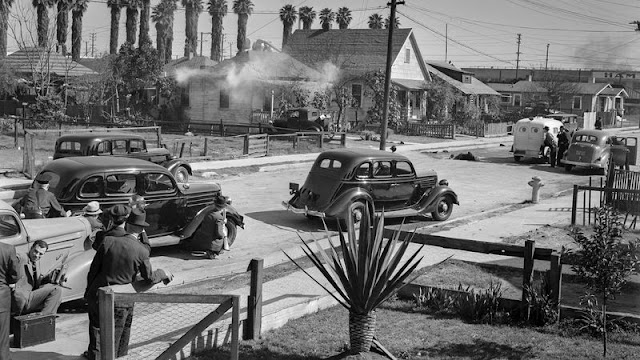 The bodies of a deputy city marshal and his helper -- shot and killed by George Farley as they tried to serve an eviction notice on him -- lie in front of a barricaded home. They were Deputy Marshal T. Dwight Crittenden and Leon W. Romer, both 60.

Farley, 55, was wounded five times and captured after police stormed the house. He was later convicted of two counts of manslaughter and ordered to serve 10 to 20 years in San Quentin State Prison. 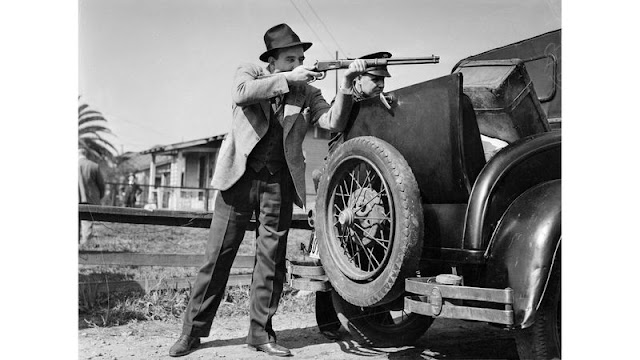 Feb. 17, 1938: Det. Lt. Robert Underwood, shielded by an automobile, fires into the home in which suspect George Farley had barricaded himself. (Los Angeles Times Archive/UCLA)

According to an April 21, 1939, L.A. Times article announcing the contest results, this photo, entitled "Tragedy," was "a remarkable shot taken at great personal risk during the siege of George Farley, who slew two deputy marshals as they tried to serve an eviction notice on him."

The second image could also have been taken by McCrory, but there was at least one other photographer at the scene. Look at the man in the background on the left, holding what looks like a Speed Graphic. 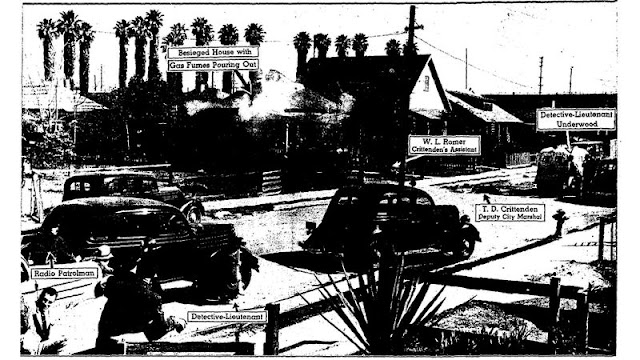 A digitized copy of a page from a Feb. 18, 1938 edition of the Los Angeles Times showing the published photo with labels added identifying police, bodies and Farley's rented home.

(via Los Angeles Times)
Posted by Yesterday Today at 1:47 PM