1940s War Fashion: A Young Woman Demonstrating How to Achieve the Full Leg Effect With Liquid Stockings in 1941


Until the end of the 1930s the best women’s stockings were made from silk. This changed in the United States when DuPont began manufacturing nylon in 1939. Nylon stockings went on limited sale in October of that year followed by a national launch at selected stores in 1940. DuPont struggled to keep up with demand and American women were still complaining of shortages in 1942 when the United States joined the war. Commercial quantities of nylon stockings would not reach the rest of the world until after 1945.

Although most nylon was used to make stockings, some was bought by the American military to replace silk in the manufacture of parachutes. When the United States entered the war, DuPont shifted nylon production to a war footing and production was channeled into national defense uses, including parachutes and bomber tyres, and supplies of nylon for stockings dried up. Silk stockings were also unavailable, as trade with Japan ceased and the American army requisitioned all stores of silk for parachutes, munitions and other military uses.

Women were asked to collect silk and nylon stockings and hand them in to help the war effort.

As silk and nylon stockings vanished from the shelves, women looked to alternatives. Depending on the occasion, what was available, their degree of patriotism and their economic situation, they substituted with stockings made from other fibres, wore socks, covered their legs with trousers, went bare-legged or used leg make-up – also known as cosmetic stockings, liquid stockings, bottled stockings and phantom hose – to give the appearance of stockings.

In England, wartime austerity led some women to try their hand at making their own cosmetic stockings from published recipes.

Applying the cosmetic stocking liquid, lotion, cream or stick evenly so that there were no streaks would also have taken practice. Fortunately, help on how to achieve the best results was available from the place of purchase and from articles in newspapers and magazines.

The end of the war saw nylon stockings return to the shelves followed by a corresponding decline in the use of substitutes. DuPont began producing nylon for stockings within two-weeks of the Japanese surrender and this produced what reporters of the time called the ‘nylon riots’ of 1945 and 1946 as women scrambled to buy them in the United States. In those parts of the world where things remained economically depressed and/or clothes remained rationed, cosmetic stockings lingered longer and were still being sold in the 1950s, well after the war was over. 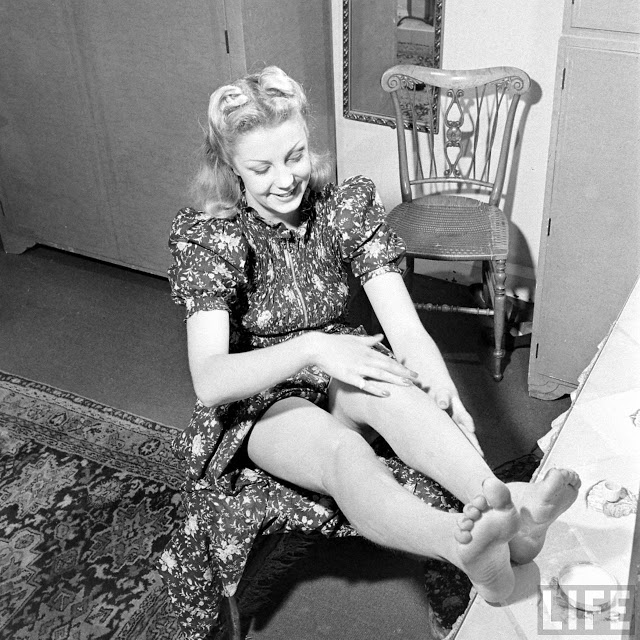 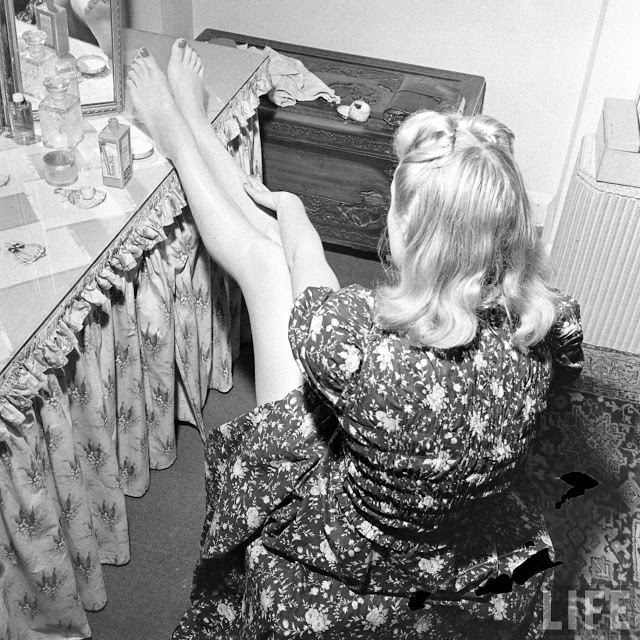 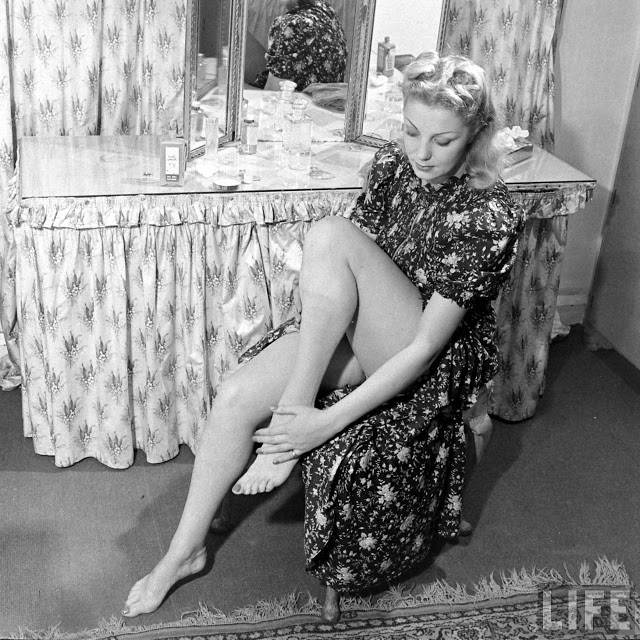 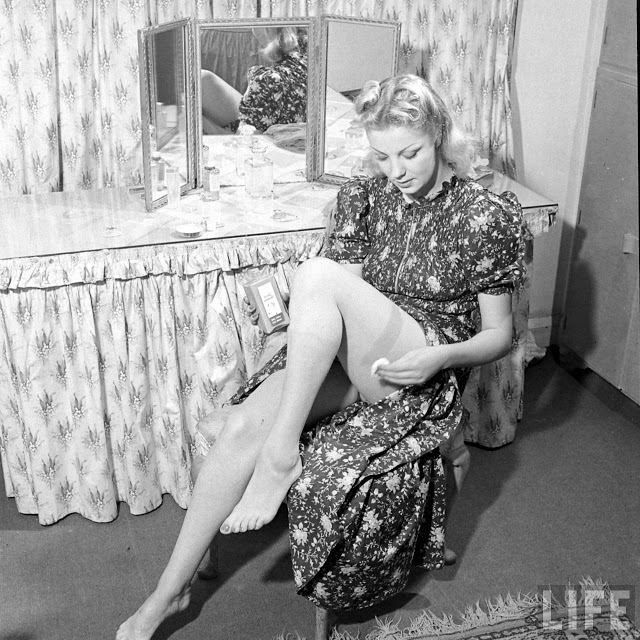 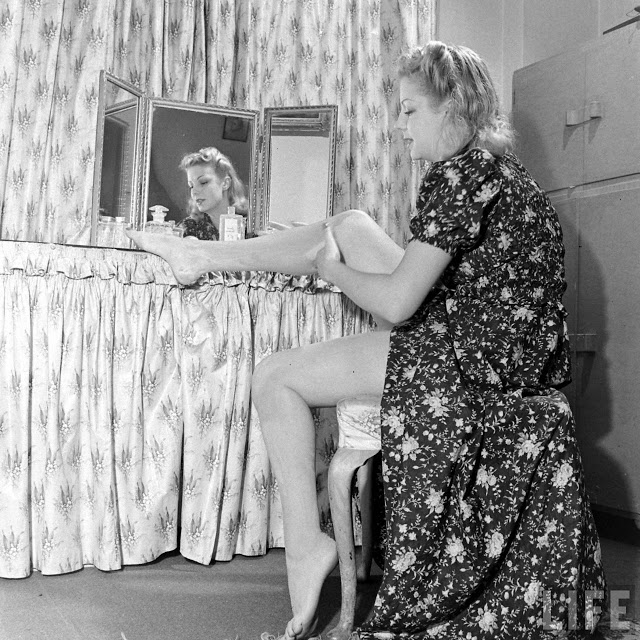 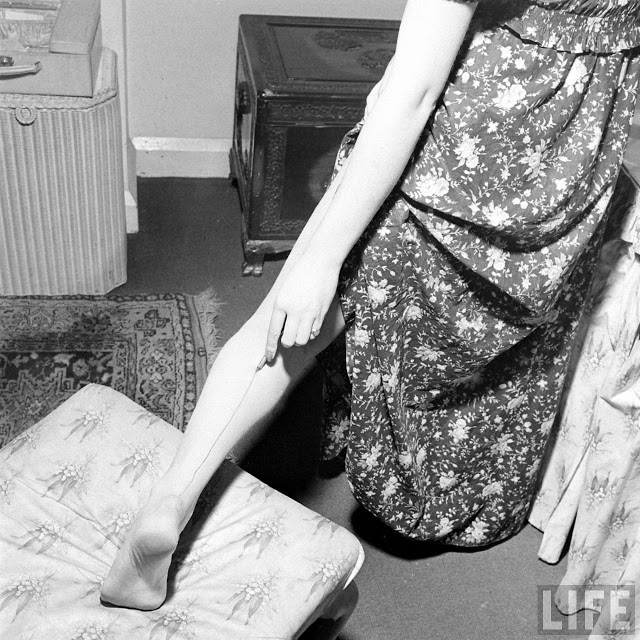 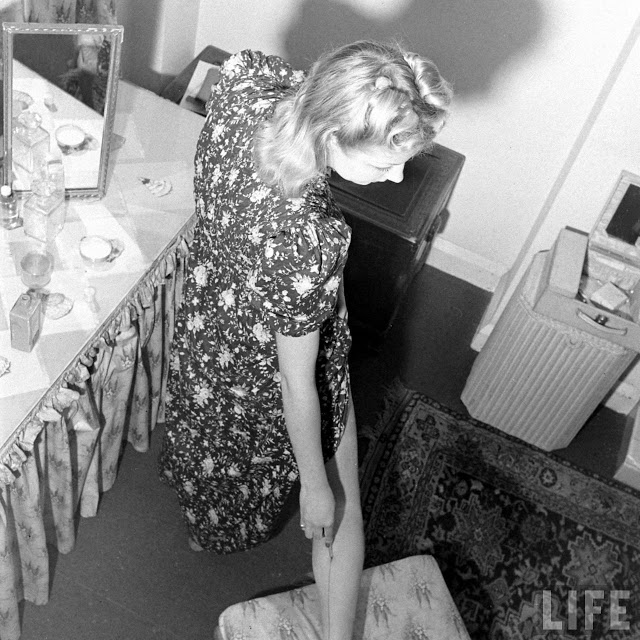 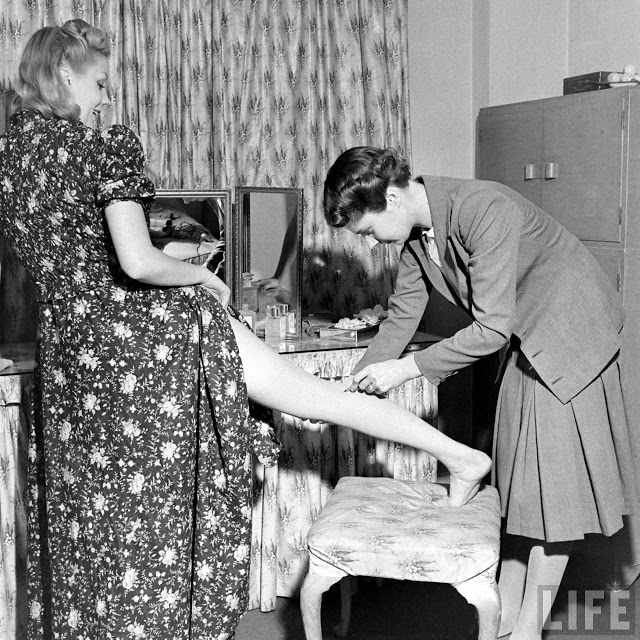 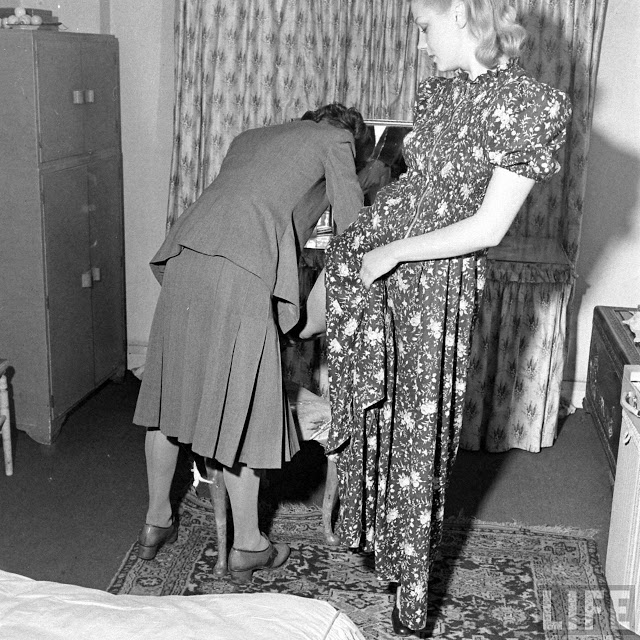 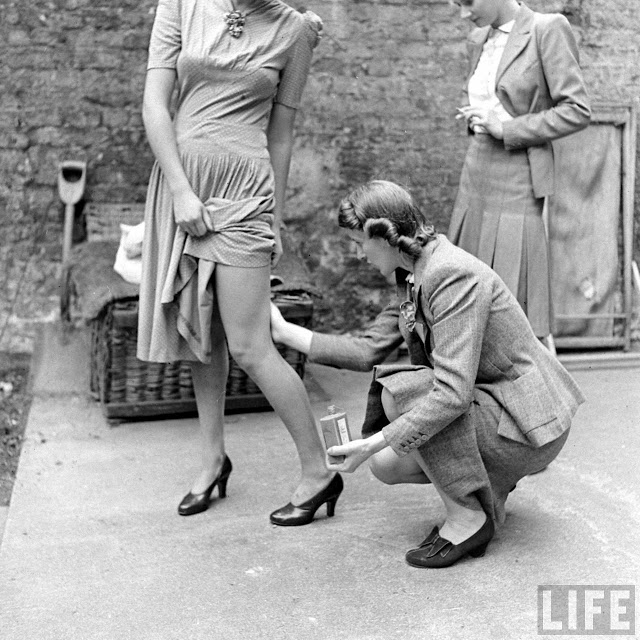 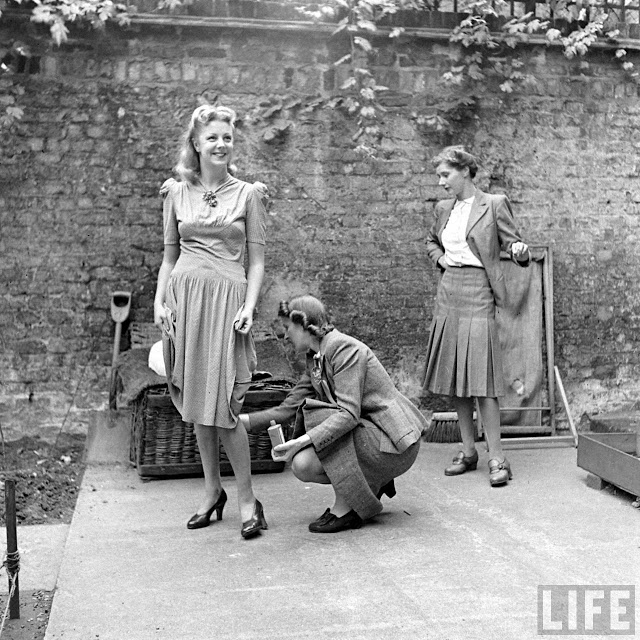 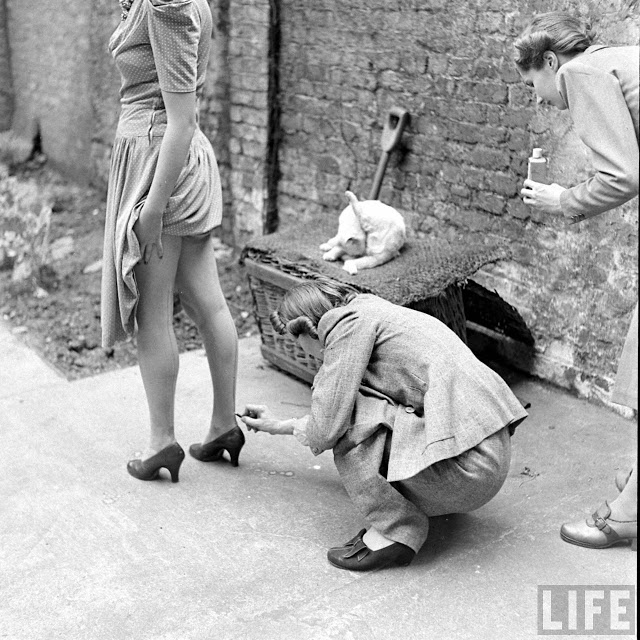 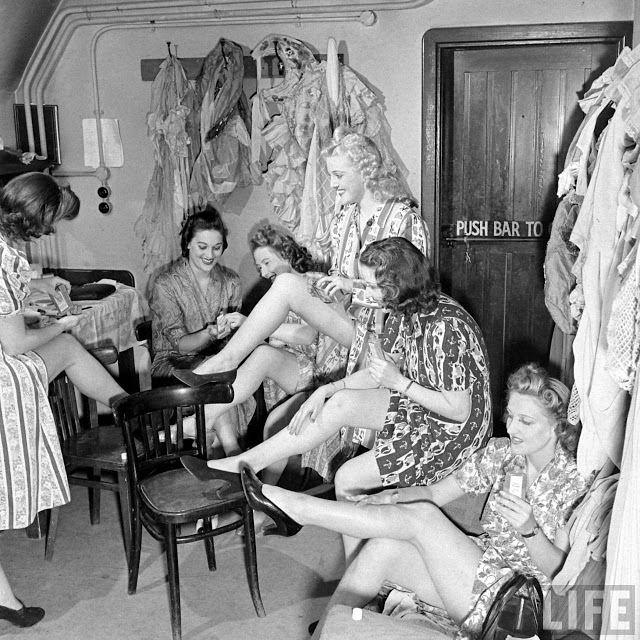 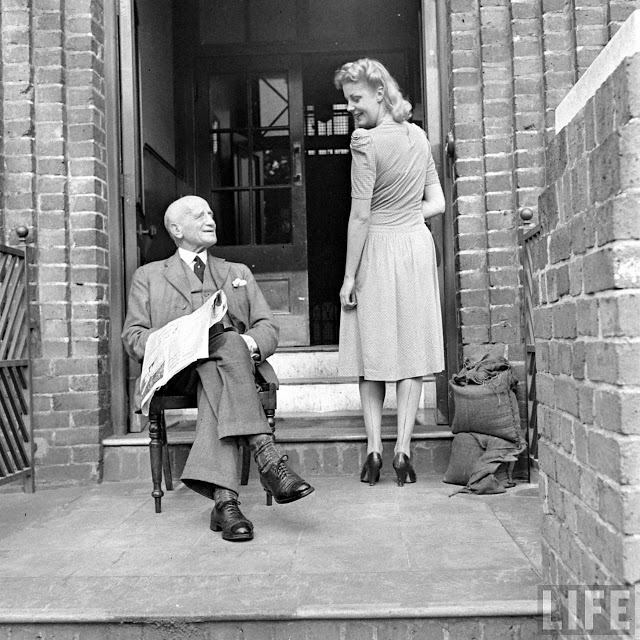 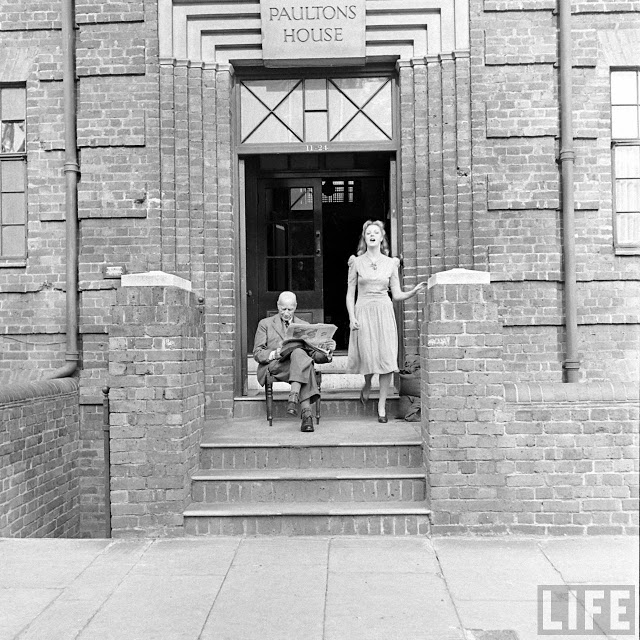 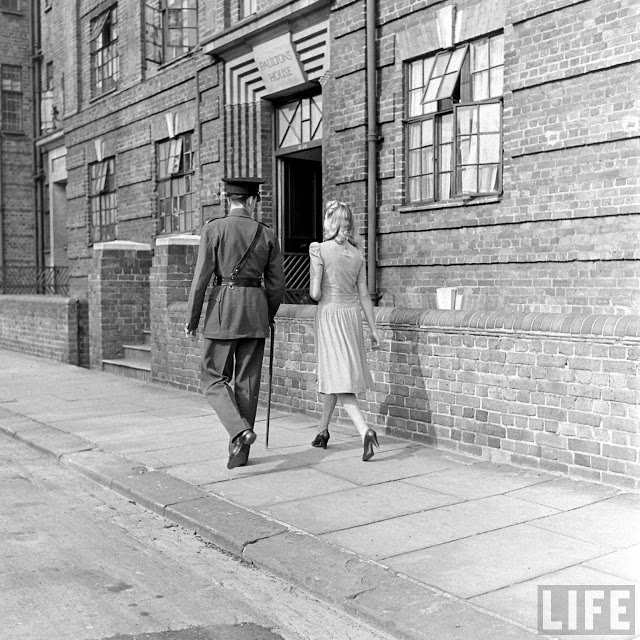 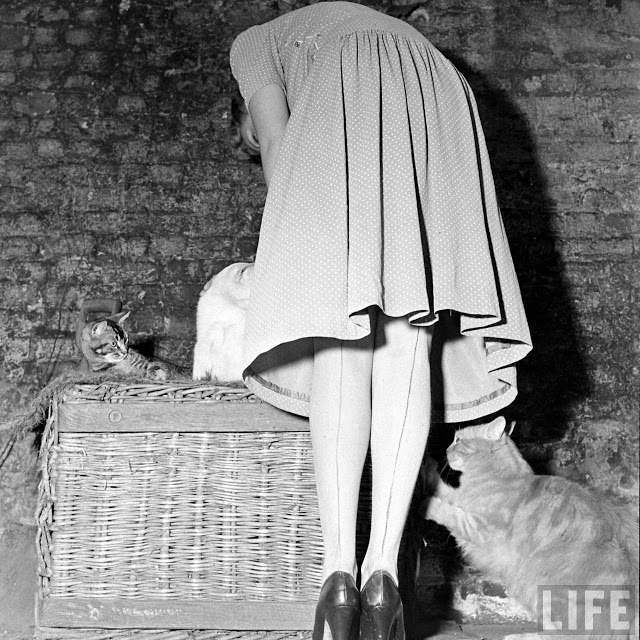 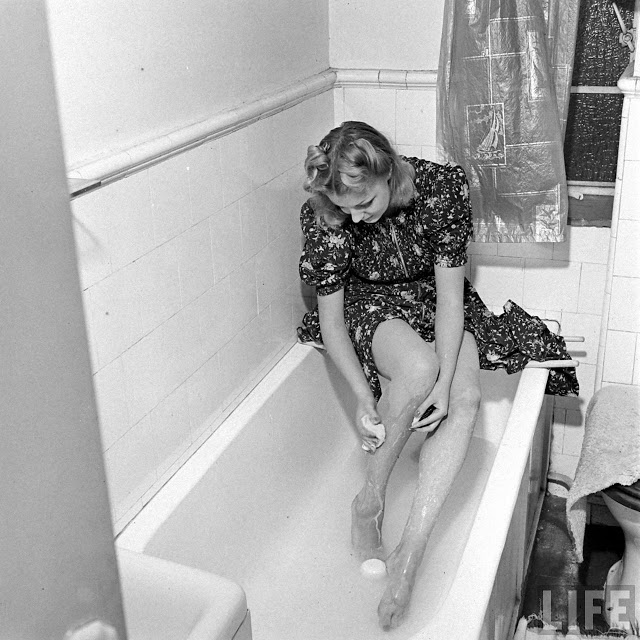 (Photos by David E Scherman/ LIFE archive, via CosmeticsandSkin.com)
Posted by Yesterday Today at 11:10 AM