These photographs from Eva Braun's personal picture albums reveal new dimensions of the woman who was Adolf Hitler's longtime girlfriend and, in their last, frantic hours together, his wife. Braun became the central woman in Hitler's life after the 1931 suicide of Geli Raubal, the future Führer's 23-year-old niece (and rumored lover). 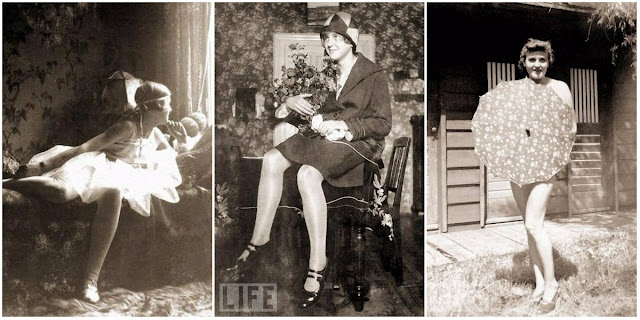 By all accounts, Eva was an unpretentious companion for the Nazi leader, but also a woman at once frivolous and vain -- unsurprising characteristics, perhaps, in a former teenage model, but striking in a figure long associated with the darkest chapters of the 20th century.

Showing Eva Braun relaxing with friends at home and posing glamorously in a swimsuit while on vacation, this collection of rare and previously unseen photos comes from a cache of images confiscated by the U.S. Army in 1945 and brought to light by collector and curator Reinhard Schulz exclusively for LIFE. 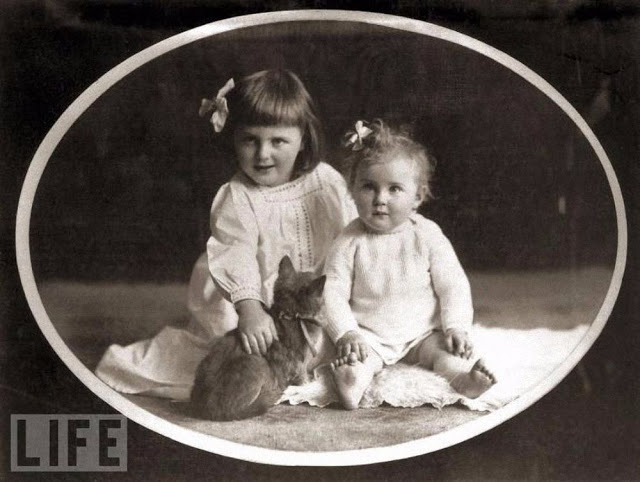 Eva and her sister Ilse in a childhood photo, 1913. In later life, Ilse worked for -- and had a relationship with -- a Jewish surgeon, Dr. Martin Levy Marx, until he emigrated to the United States in 1938. 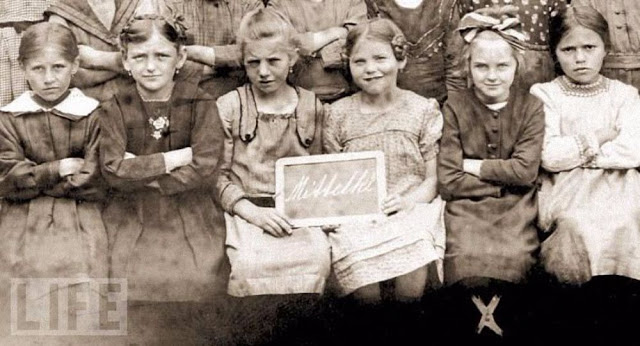 Nine-year-old Eva Braun (second from right), with some of her classmates at the Beilngries convent school Beilngries, Germany, 1922. 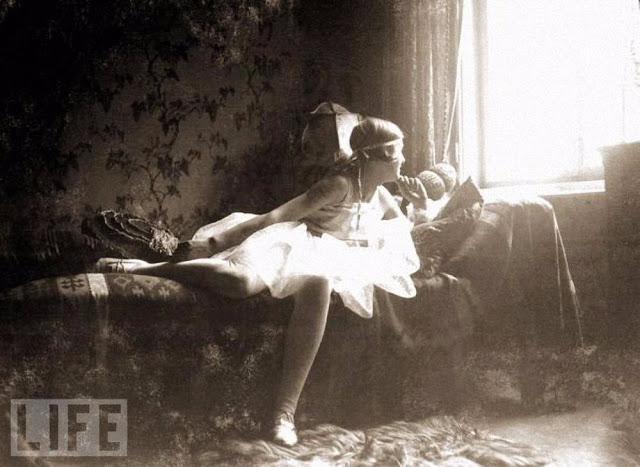 "My first carnival costume" wrote Braun underneath this 1928 photo. 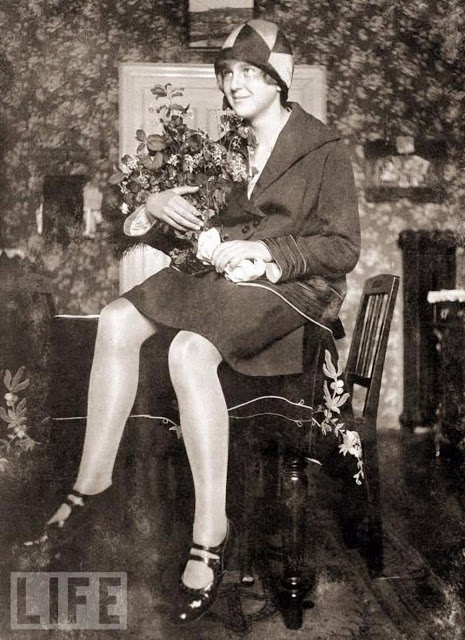 Eva Braun sitting on a table in the living room at her parent's house in Munich, Germany, 1929. She was staying with her family after finishing her education at a trade school; later that year, she met Hitler at Hoffmann's photo studio. 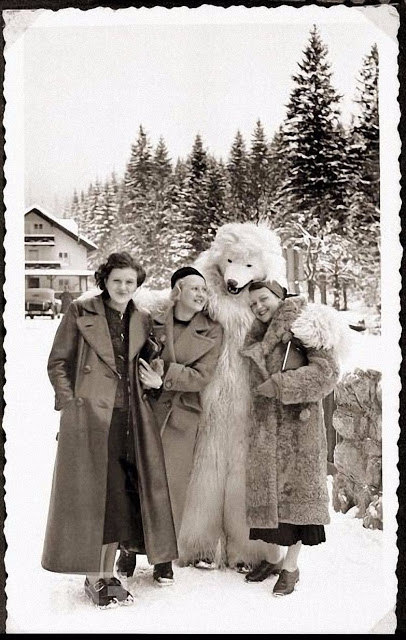 Eva Braun and friends in the Bavarian Alps, Germany, 1935. 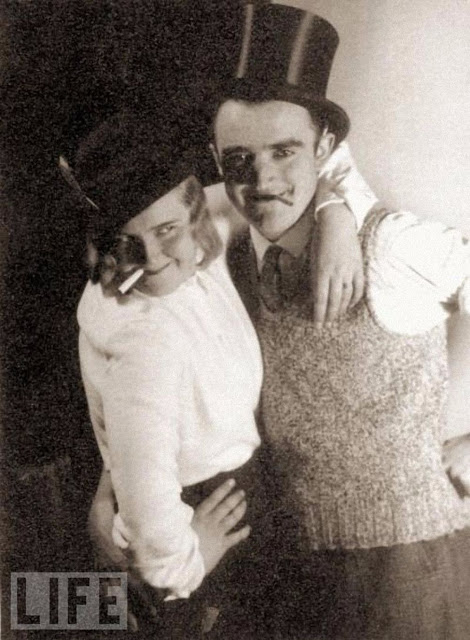 Eva Braun and an unidentified friend at a house party in Munich, 1935. By all accounts Braun enjoyed these parties and frequently dressed up for them during carnival. She also liked to smoke but only when Hitler was not around. 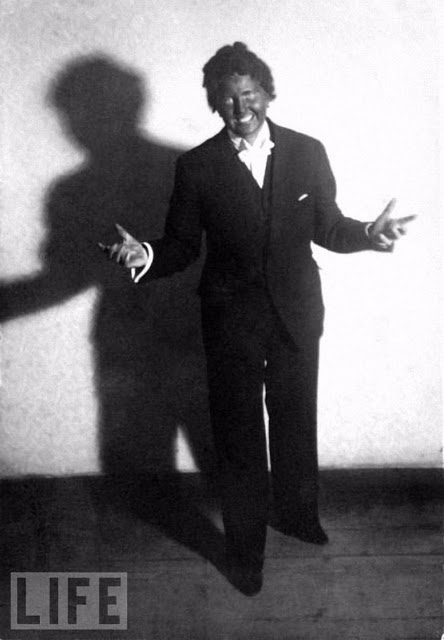 This 1937 photo of Braun was titled "Me as Al Jolson" and depicts her in blackface as the American actor and singer in his role in The Jazz Singer. Braun was a fan of American movies, including Gone with the Wind. 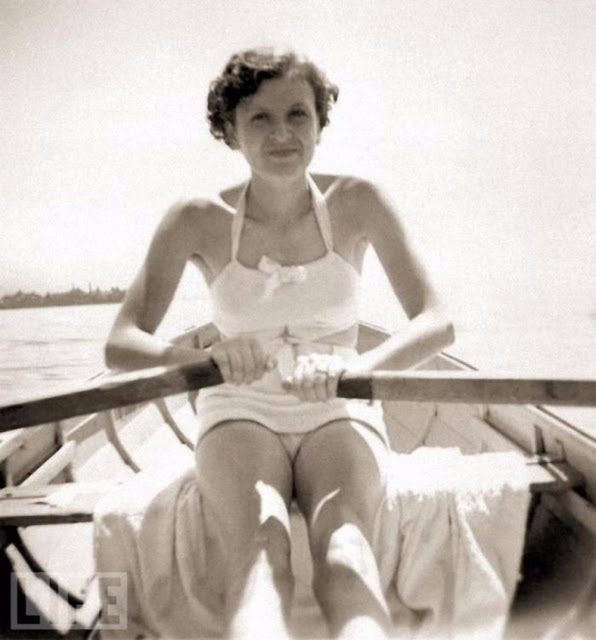 Eva Braun in a rowboat on Lake Worthsee near Munich in 1937. 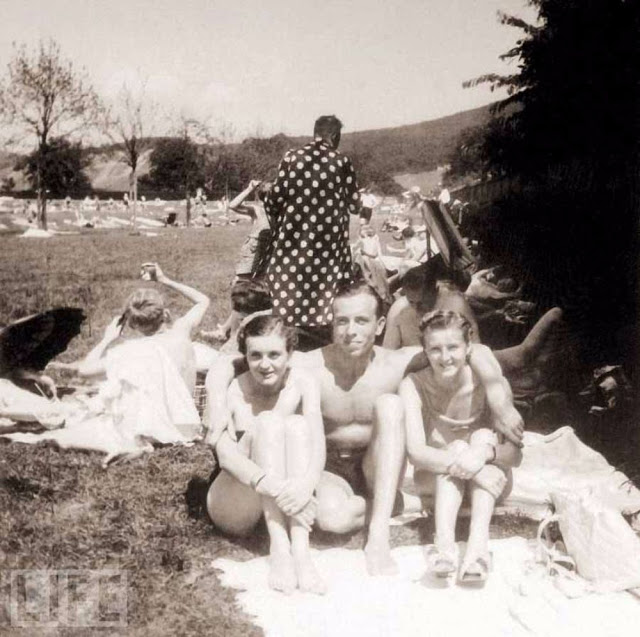 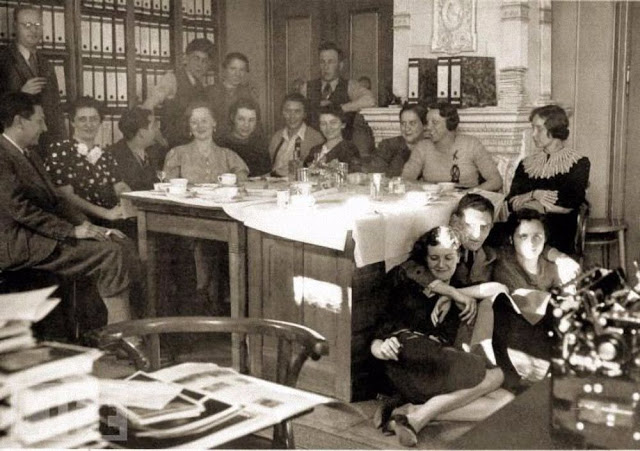 Eva Braun (on floor, at left) and colleagues at the office of Heinrich Hoffmann's photo agency, Munich, Germany, 1938. 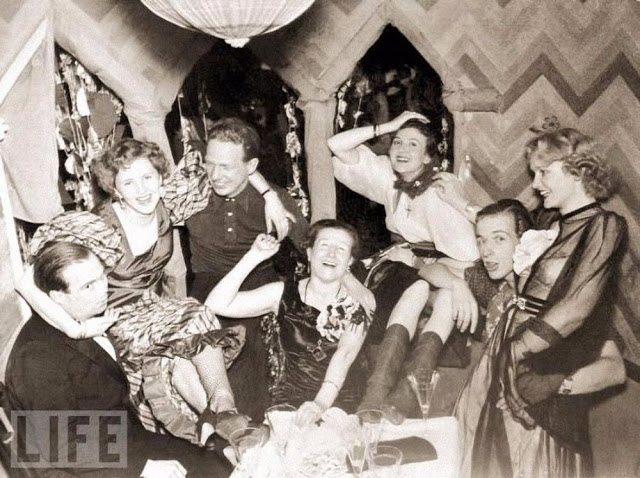 Eva Braun (far right) celebrates carnival time at her parents house in Munich, Germany, 1938. Among the group are her mother Franziska Katharina (center) and her sisters Ilse and Margarethe. 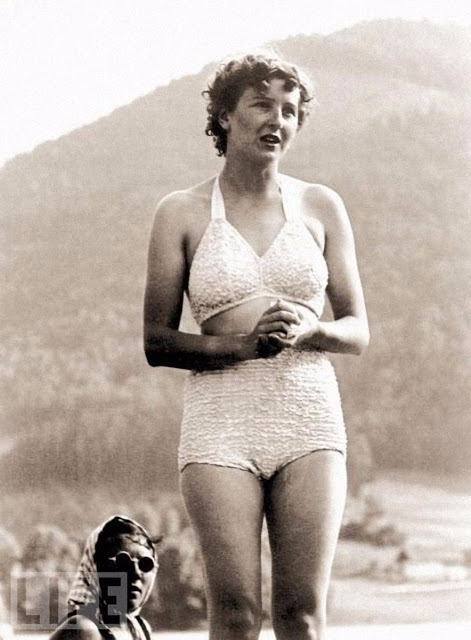 Braun in her bathing suit near Berchtesgaden, Germany, 1940. 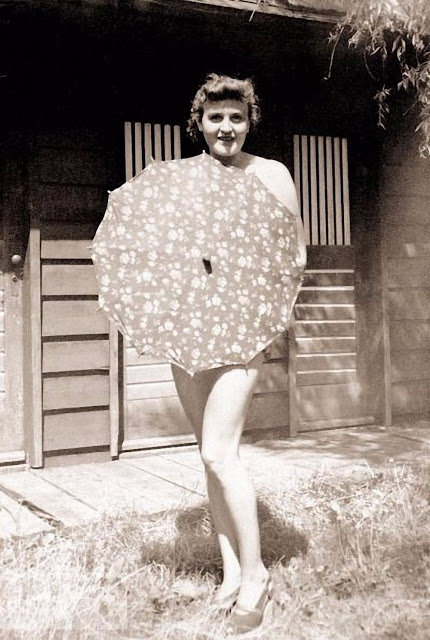 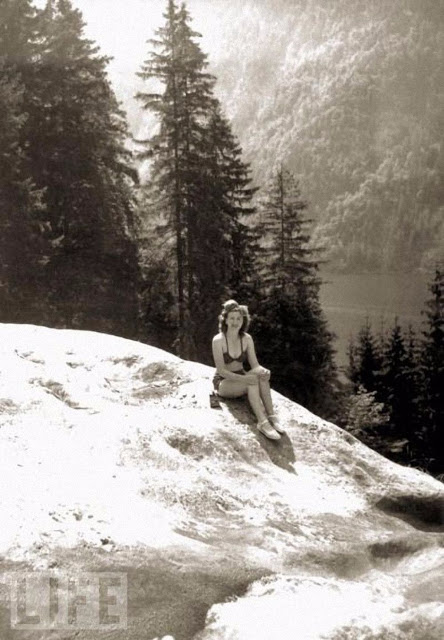 Hitler disapproved of some of Braun's habits such as smoking, wearing makeup, skinny dipping, and nude sunbathing. Here, Braun, in a bathing suit, relaxes by Konigssee lake in 1940. 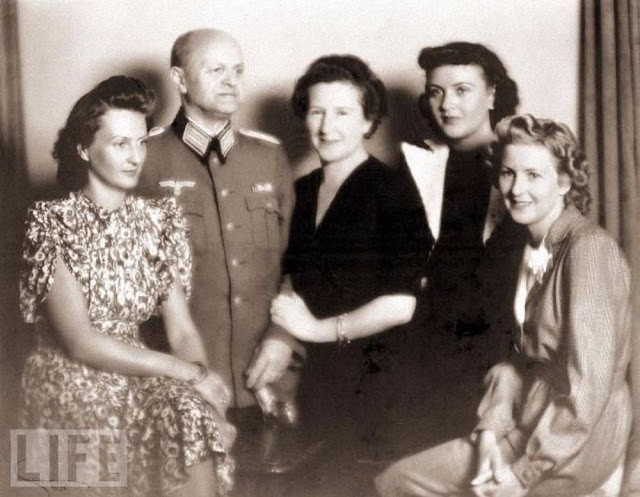 Eva Braun (far right) with her parents, Friedrich "Fritz" and Franziska, and her sisters Ilse (left) and Gretl, 1940. 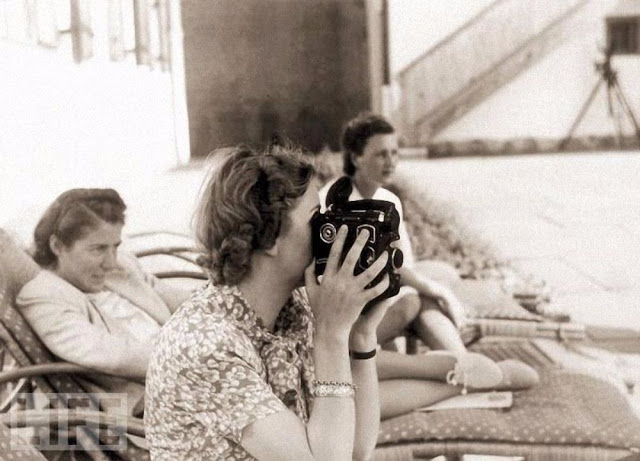 Braun filming with her 16mm camera in 1942. Occasionally, she shot with color film which, years later, proved invaluable to historians as it offered an inside view of Hitler and his entourage. 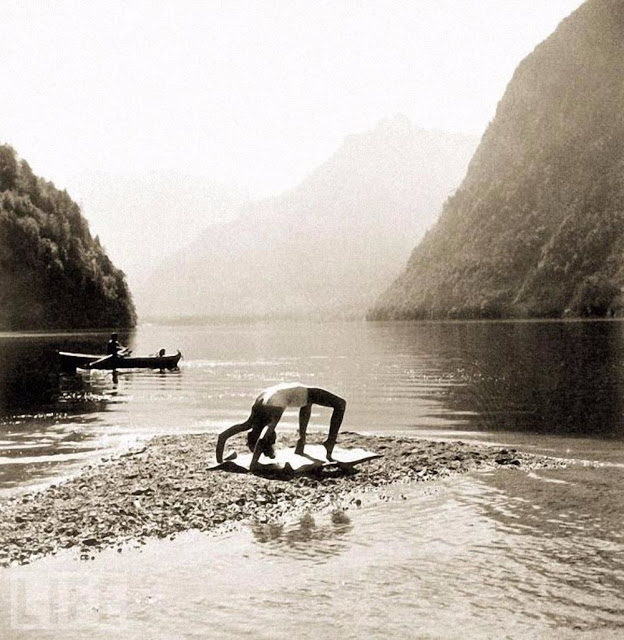 Braun exercising in her bathing suit at Konigssee lake, a few miles from Hitler's mountaintop retreat, in 1942. 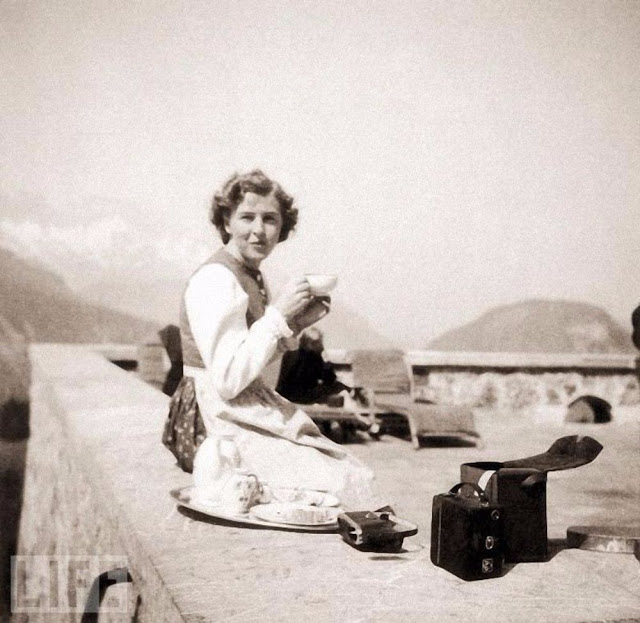 Eva Braun sits on the terrace at Berghof, Hitler's home in the Alps, 1942. A photography buff, she took many photos of daily life at Berghof; note the camera by her side. But her life would not long remain so idyllic. 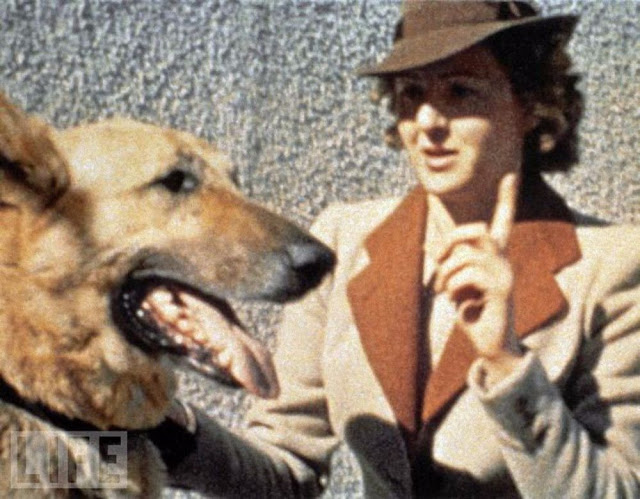 Braun and Hitler's German shepherd in 1942. 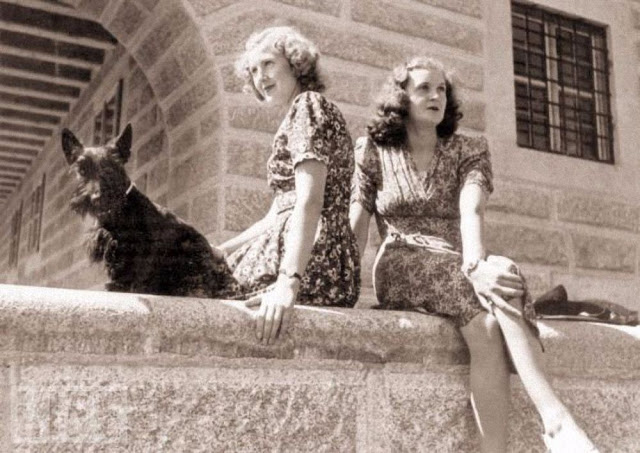