Facing death –– This group of men show a wide range of emotions: the first from the
left looks anguished, the next one looks defiant, the last one looks resigned... but the
man third from the left is smiling at his executioners. He knows he is sure to die as
others had been executed before him, but he faces his end with a smile. 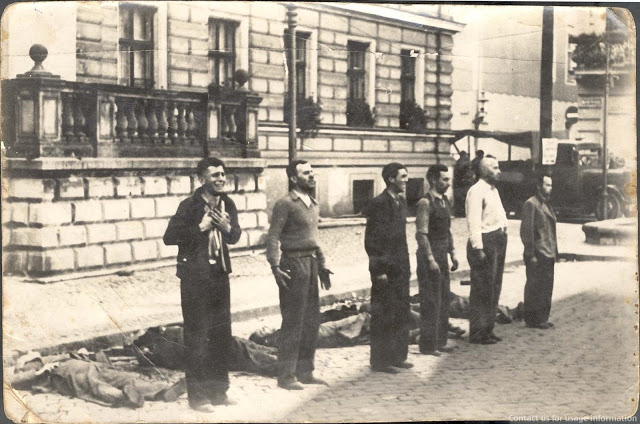 The different expressions of six Polish civilians moments before death by firing
squad, after the Nazi invasion of Poland at the outset of World War II, Bydgoszcz, Poland,
1939.

On September 3, 1939, two days after the start of the German invasion of Poland, a series
of killings occurred in and around the Polish town of Bydgoszcz (German: Bromberg), where
a sizable German minority lived. These killings were termed ‘Bloody Sunday’.

The Nazis exploited the deaths as grounds for a massacre of Polish inhabitants after the
Wehrmacht captured the town. In an act of retaliation for the killings on Bloody Sunday, a
number of Polish civilians were executed by German military units of the Einsatzgruppen,
Waffen SS, and Wehrmacht.

According to German historian Christian Raitz von Frentz, 876 Poles were tried by German
tribunal for involvement in the events of Bloody Sunday before the end of 1939. 87 men and
13 women were sentenced without the right to appeal. Polish historian Czesław Madajczyk
notes 120 executions in relation to Bloody Sunday, and the execution of 20 hostages after
a German soldier was allegedly attacked by a Polish sniper.

(via Rare Historical Photos)
Posted by Yesterday Today at 10:19 AM