John McCain's capture and subsequent imprisonment occurred on October 26, 1967. He was flying his 23rd bombing mission over North Vietnam when his A-4E Skyhawk was shot down by a missile over Hanoi. McCain fractured both arms and a leg when he ejected from the aircraft, and nearly drowned after he parachuted into Trúc B?ch Lake. Some North Vietnamese pulled him ashore, then others crushed his shoulder with a rifle butt and bayoneted him. McCain was then transported to Hanoi's main Hoa Lò Prison, nicknamed the "Hanoi Hilton".

Although McCain was seriously wounded and injured, his captors refused to treat him. They beat and interrogated him to get information, and he was given medical care only when the North Vietnamese discovered that his father was a high-ranking admiral. His status as a prisoner of war (POW) made the front pages of major newspapers.

McCain spent six weeks in the hospital, where he received marginal care. He had lost 50 pounds (23 kg), was in a chest cast, and his gray hair had turned as white as snow. McCain was sent to a different camp on the outskirts of Hanoi. In December 1967, McCain was placed in a cell with two other Americans who did not expect him to live more than a week. In March 1968, McCain was placed into solitary confinement, where he would remain for two years.

In mid-1968, his father John S. McCain Jr. was named commander of all U.S. forces in the Vietnam theater, and the North Vietnamese offered McCain early release because they wanted to appear merciful for propaganda purposes, and also to show other POWs that elite prisoners were willing to be treated preferentially. McCain refused repatriation unless every man taken in before him was also released. Such early release was prohibited by the POWs' interpretation of the military Code of Conduct which states in Article III: “I will accept neither parole nor special favors from the enemy”. To prevent the enemy from using prisoners for propaganda, officers were to agree to be released in the order in which they were captured.

Beginning in August 1968, McCain was subjected to a program of severe torture. He was bound and beaten every two hours; this punishment occurred at the same time that he was suffering from dysentery. Further injuries brought McCain to “the point of suicide,” but his preparations were interrupted by guards. Eventually, McCain made an anti-U.S. propaganda "confession". He has always felt that his statement was dishonorable, but as he later wrote, “I had learned what we all learned over there: every man has his breaking point. I had reached mine.” Many U.S. POWs were tortured and maltreated in order to extract "confessions" and propaganda statements; virtually all of them eventually yielded something to their captors. McCain received two to three beatings weekly because of his continued refusal to sign additional statements.

McCain refused to meet various anti-war groups seeking peace in Hanoi, wanting to give neither them nor the North Vietnamese a propaganda victory. From late 1969, treatment of McCain and many of the other POWs became more tolerable, while McCain continued actively to resist the camp authorities. McCain and other prisoners cheered the U.S. "Christmas Bombing" campaign of December 1972, viewing it as a forceful measure to push North Vietnam to terms.

McCain was a prisoner of war in North Vietnam for five and a half years until his release on March 14, 1973. His wartime injuries left him permanently incapable of raising his arms above his head. 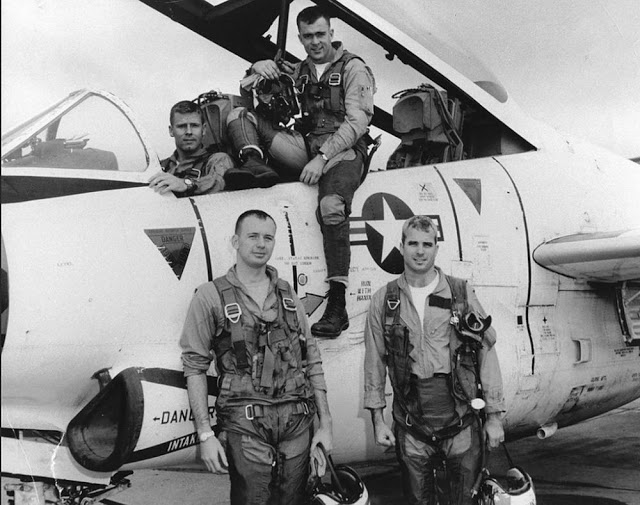 John McCain (front right) with his squadron and T-2 Buckeye trainer, in 1965. 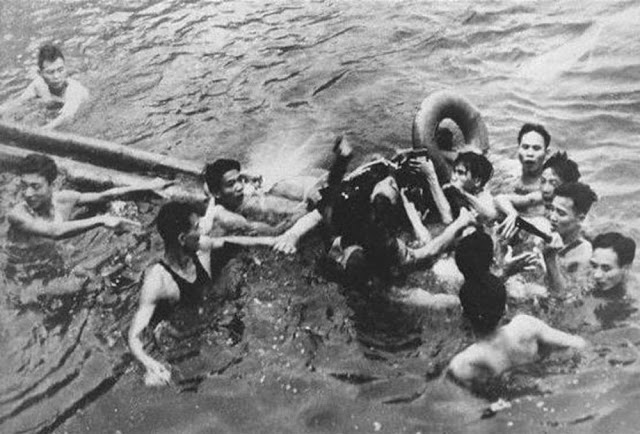 John McCain being pulled out of Trúc Buch Lake in Hanoi and about to become a prisoner of war, on October 26, 1967. 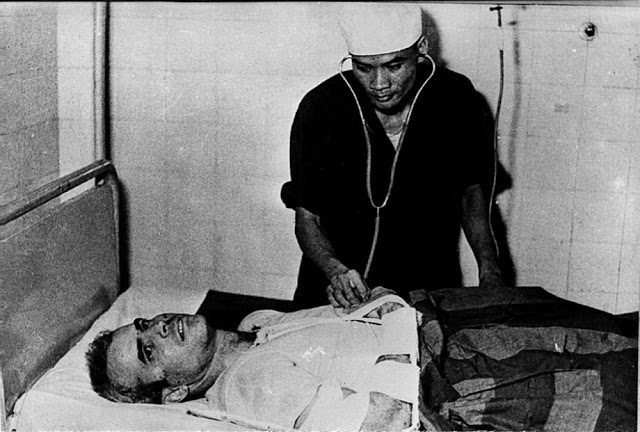 John McCain is administered to in a Hanoi, Vietnam hospital as a prisoner of war in the fall of 1967. 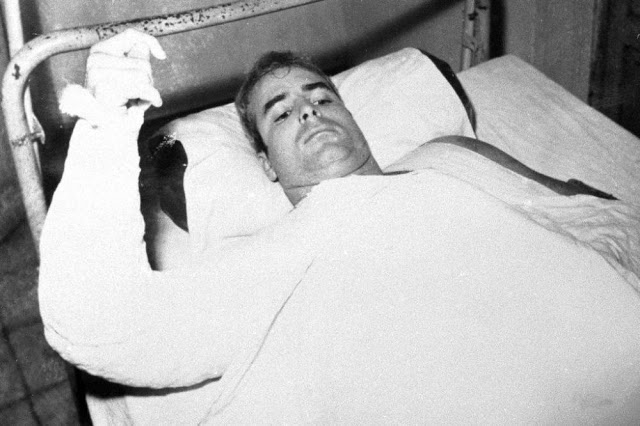 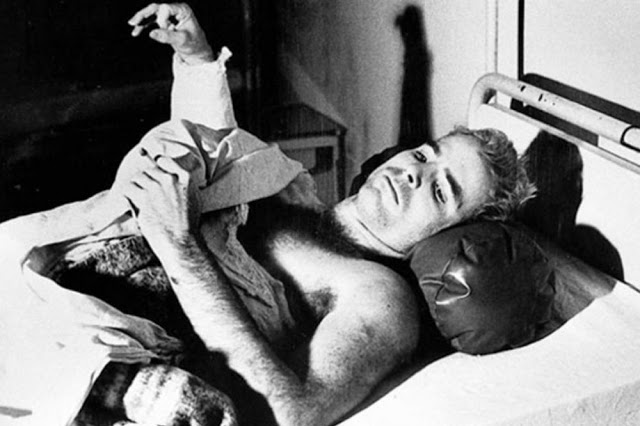 John McCain lies in a hospital bed in Hanoi, North Vietnam, after being taken prisoner of war. 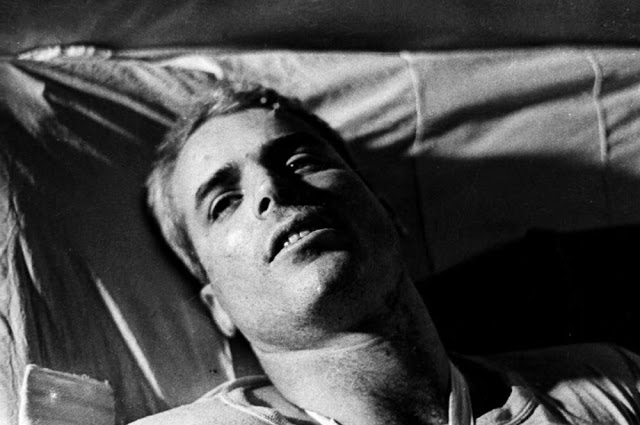 This file picture taken in 1967 shows US Navy Air Force Major John McCain lying on a bed in a Hanoi hospital as he was being given medical care for his injuries. The A-4E (BuNo 149959) six days before McCain was shot down with it, landed by another pilot aboard Oriskany. 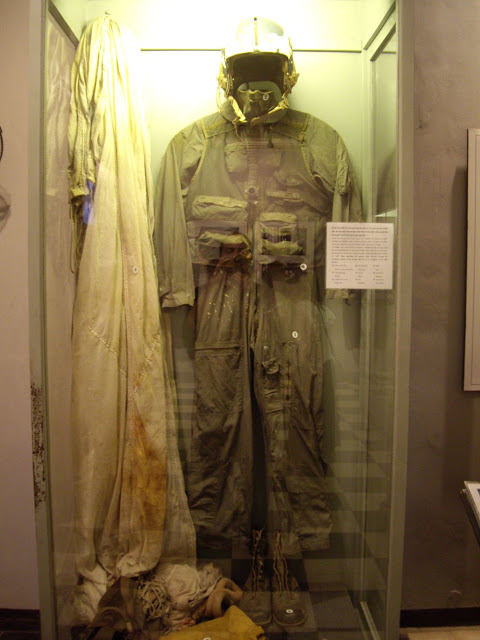 Decades later, McCain's flight suit and gear were put on display at a museum in the remaining portion of Hoa Lò Prison. 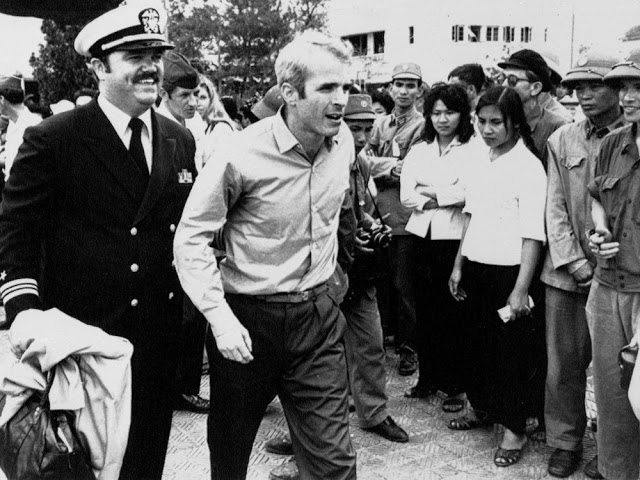 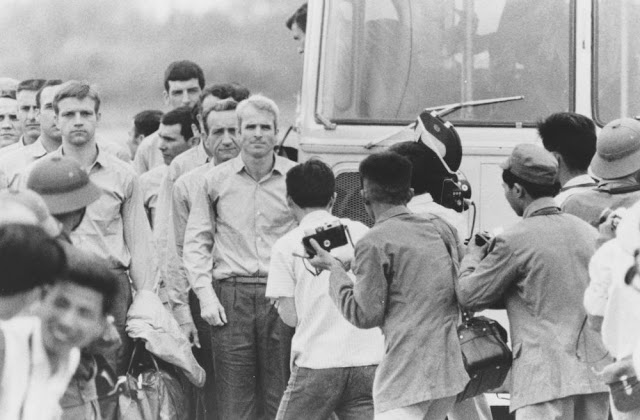 John McCain during his release as a POW in March 1973. 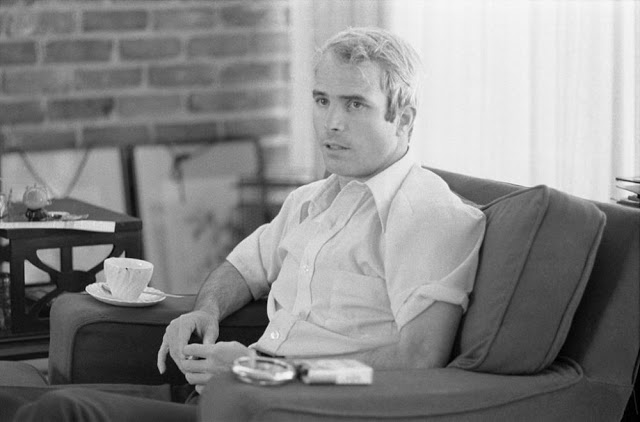 McCain giving an interview to the press on April 24, 1973, after his return from Vietnam. 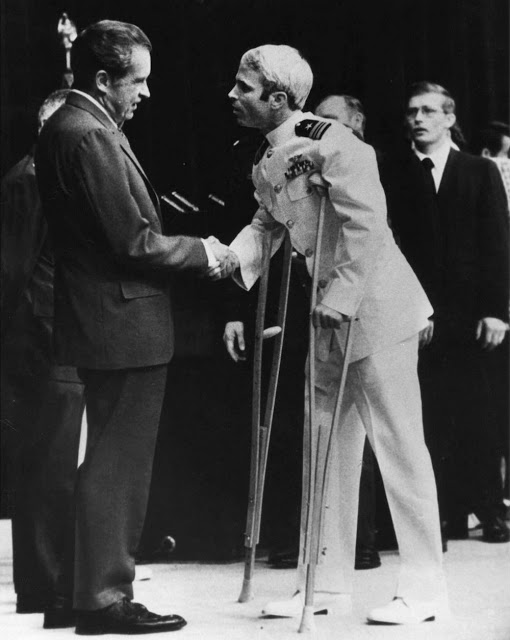 John McCain is welcomed by U.S. President Richard Nixon upon Mccain's release from five and one-half years as a POW during the Vietnam War. Washington, D.C., May 24, 1973.

Posted by Yesterday Today at 11:59 AM