Starting in 1942, the U.S. government began quietly acquiring more than 60,000 acres in Eastern Tennessee for the Manhattan Project -- the secret World War II program that developed the atomic bomb.

The government needed land to build massive facilities to refine and develop nuclear materials for these new weapons, without attracting the attention of enemy spies. The result was a secret town named Oak Ridge that housed tens of thousands of workers and their families.

The entire town and facility were fenced in, with armed guards posted at all entries. Workers were sworn to secrecy and only informed of the specific tasks they needed to perform. Most were unaware of the exact nature of their final product until the nuclear bombs were dropped on Japan in 1945.

Photographer Ed Westcott (the only authorized photographer on the facility) took many photos of Oak Ridge during the war years and afterwards, capturing construction, scientific experiments, military maneuvers, and everyday life in a 1940s company town (where the company happens to be the U.S. government). 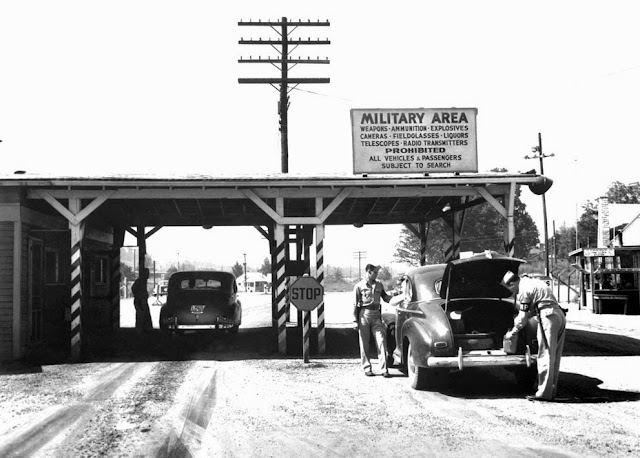 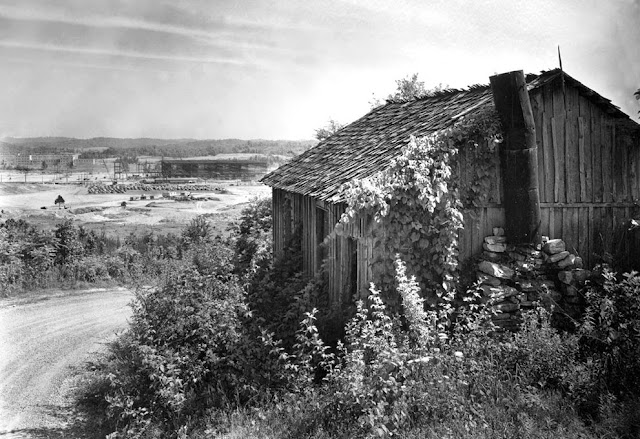 Early Construction of the K-25 uranium enrichment facility (background), with one of original houses of Oak Ridge, Tennessee in the foreground, in 1942. That year, the United States Army Corps of Engineers began quickly acquiring land in the Oak Ridge area, at the request of the U.S. government, to build production facilities for the Manhattan Project. The K-25 plant, when completed, was the largest building in the world for a time. 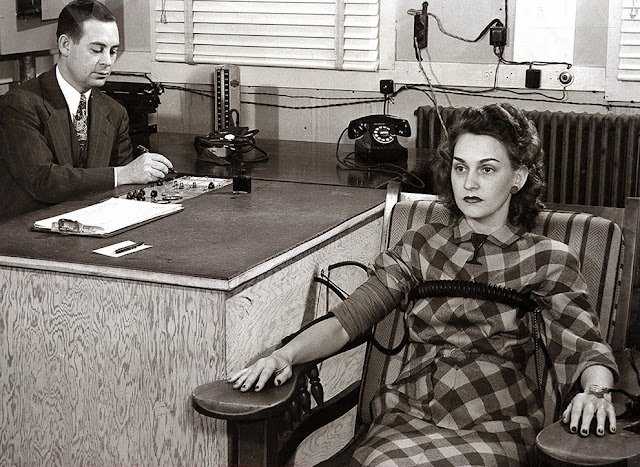 Lie detection tests were administered as part of security screening. 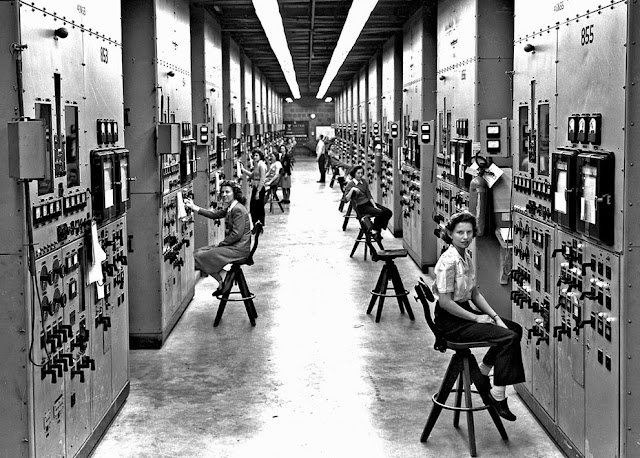 Calutron operators at their panels, in the Y-12 plant at Oak Ridge, Tennessee, during World War II. The calutrons were used to refine uranium ore into fissile material. During the Manhattan Project effort to construct an atomic explosive, workers toiled in secrecy, with no idea to what end their labors were directed. Gladys Owens, the woman seated in the foreground, did not realize what she had been doing until seeing this photo in a public tour of the facility fifty years later. 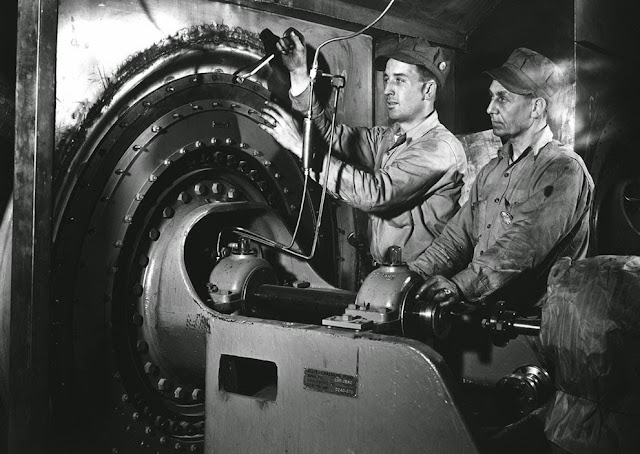 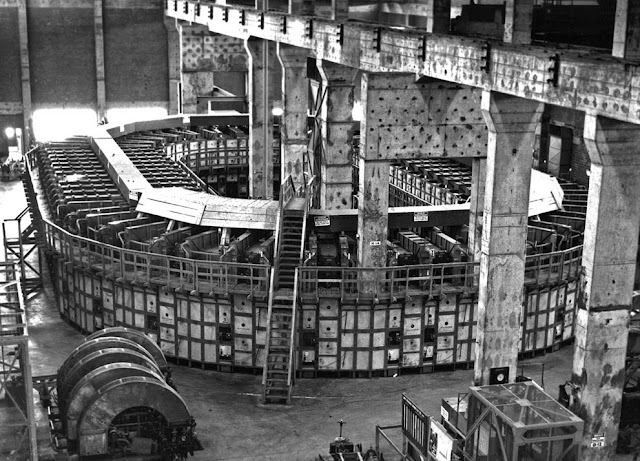 A caultron "racetrack" uranium refinery at the Y-12 plant in Oak Ridge, Tennessee, during the Manhattan Project. The light-colored bars along the top are solid silver. 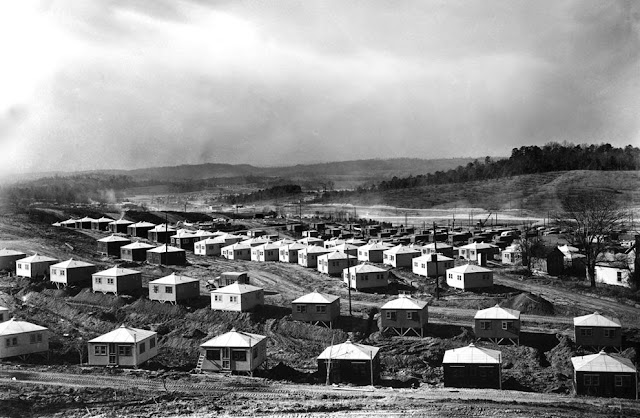 Temporary Housing (Hutments) fill the formerly empty valleys of Oak Ridge in 1945. The sudden growth of the military's facilities caused the local population to grow from about 3,000 in 1942 to about 75,000 in 1945. 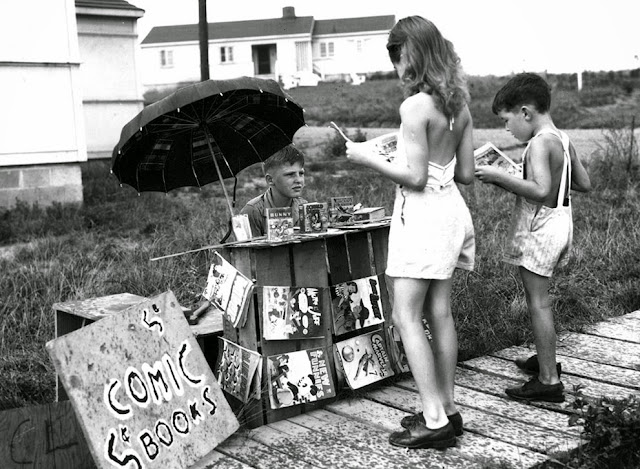 A young entrepreneur during the days of the Manhattan Project, in Oak Ridge, Tennesee. 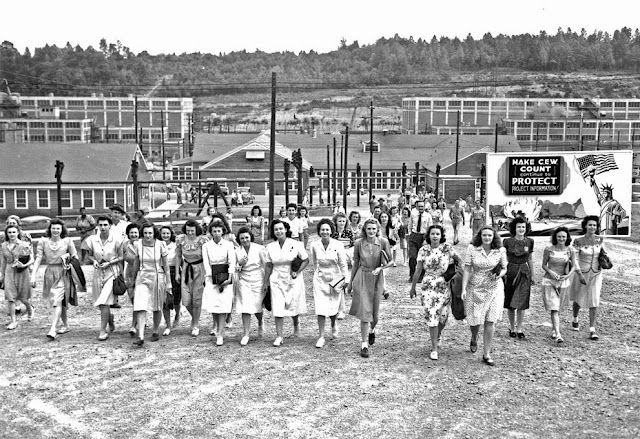 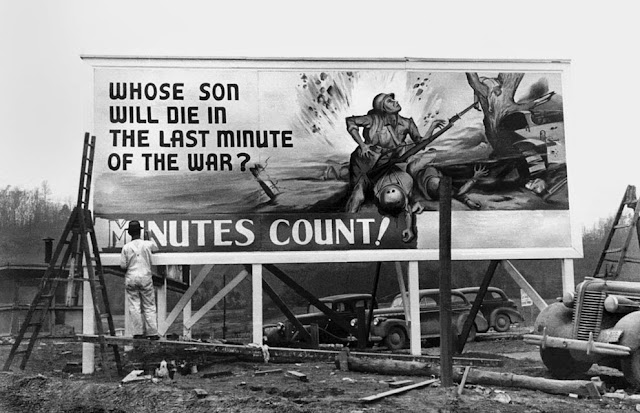 A billboard in Oak Ridge, photographed during WWII, on January 21, 1944. 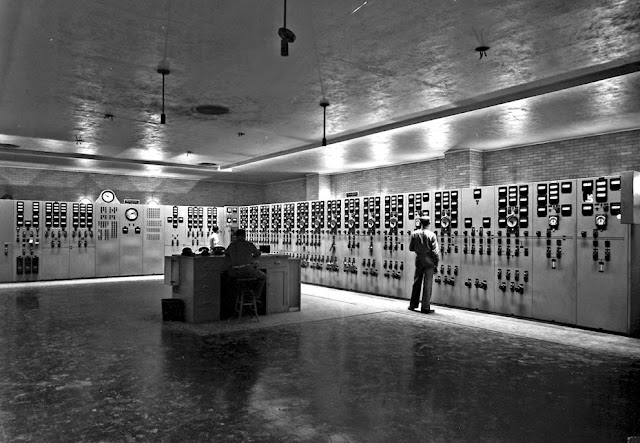 The main control room at the K-25 uranium enrichment plant in Oak Ridge. 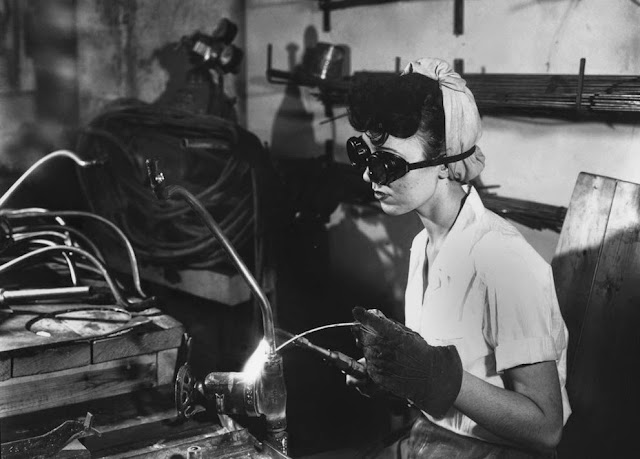 Welding at the K-25 facility in Oak Ridge, in February of 1945. At the height of production, nearly 100,000 workers were employed by the government in the secret city. 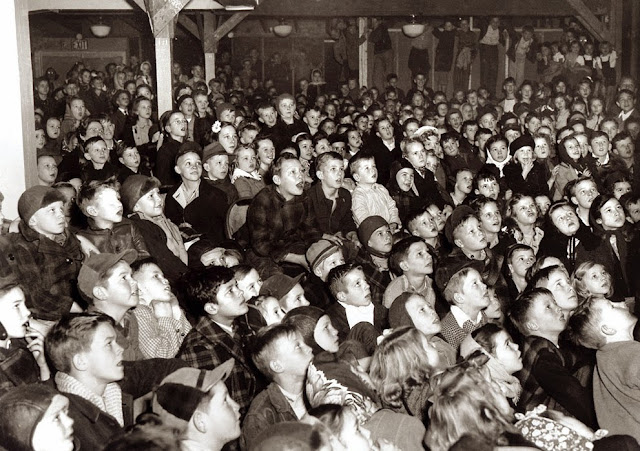 Kiddy Club at the Midtown Recreation Hall in Oak Ridge, on January 6, 1945. 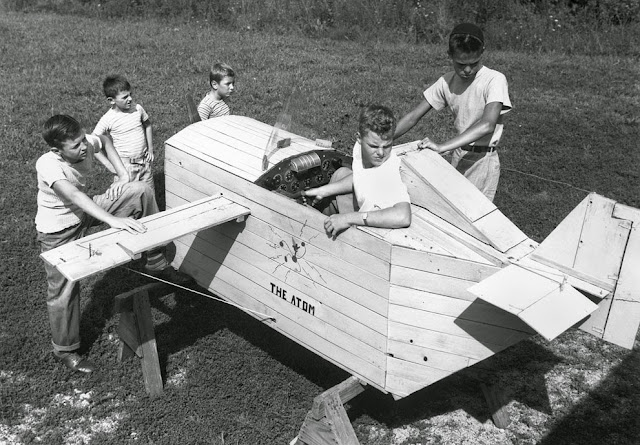 A Link Trainer, a type of flight simulator produced between the early 1930s and early 1950s, in Oak Ridge, in September of 1945. 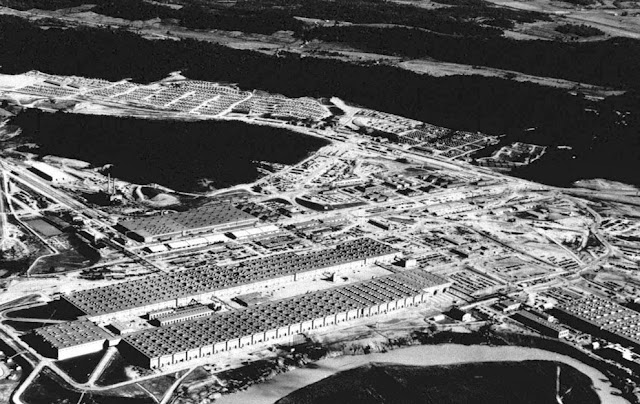 This 1945 photograph shows the giant 44 acre K-25 plant in Oak Ridge, Tennessee, where the uranium for the first atomic weapon was produced. 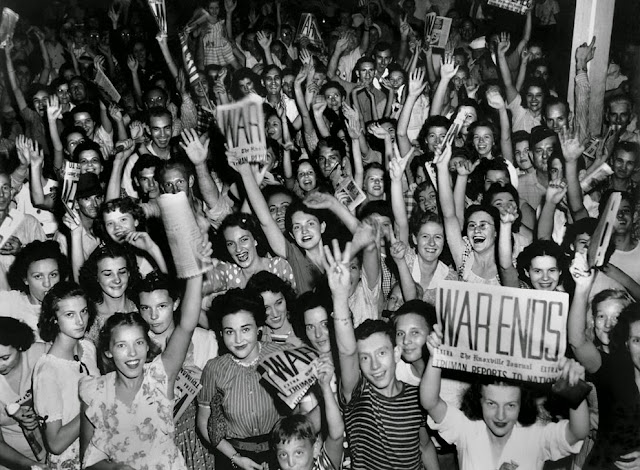 V-J day celebration in Jackson Square in downtown Oak Ridge in August of 1945. When the first atomic bomb was dropped on Japan on August 6, 1945, the news reports revealed to the people at Oak Ridge what they had been working on all along. 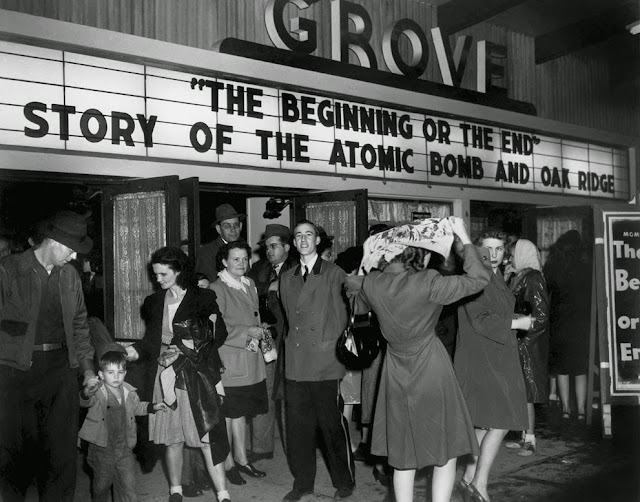 Oak Ridge's Grove Theater shows "The Beginning or The End" in March of 1947. 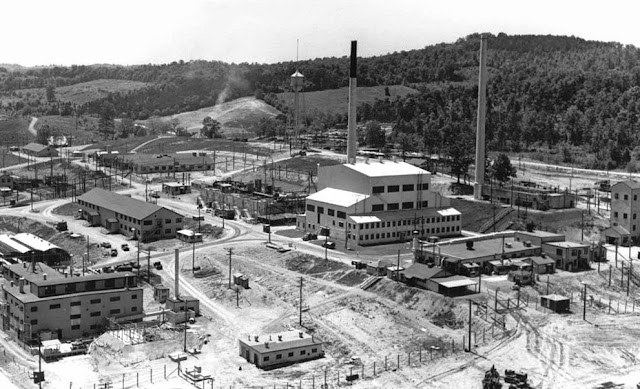 Oak Ridge's X-10 graphite reactor, in 1947. X-10 was the world's second artificial nuclear reactor (after Enrico Fermi's Chicago Pile) and was the first reactor designed and built for continuous operation. 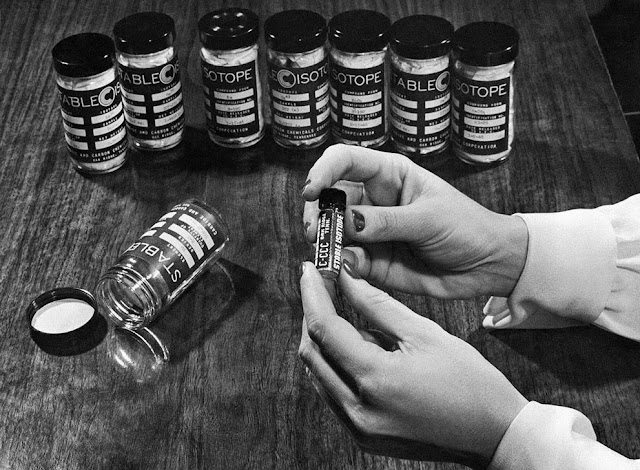 An employee at the Oak Ridge electromagnetic process plant, where stable isotopes are concentrated, holds a vial containing the stable isotope Molybdenum 92, on January 22, 1948. Stable isotopes can be handled without risk to the person. In contrast to radioactive isotopes, they do not emit radiation and can therefore be safely handled.

(Photos from doe-oakridge on Flickr, via The Atlantic)
Posted by Yesterday Today at 10:21 AM