This is the last known photo of the Space Shuttle Challenger crew boarding the space shuttle on January 28, 1986. Tragedy would strike 73 seconds into launch as the shuttle’s O-ring on it’s right booster failed leading to the separation of the Solid Rocket Booster. Extreme aerodynamic forces then broke up the orbiter. The crew compartment survived the break but the impact with the ocean surface was too violent to be survivable. 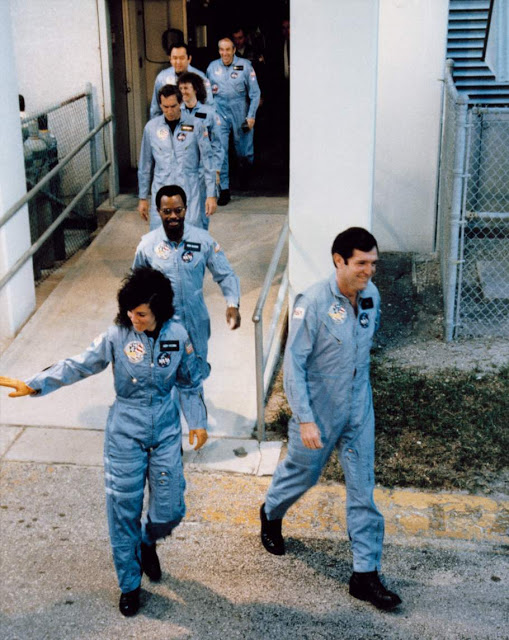 Crew members of STS-51L mission walk out of the Operations and Checkout Building on their way to Pad 39B where they will board the Space Shuttle Challenger. From front to back: Commander Francis R. “Dick” Scobee; Mission Specialists Judith A. Resnik and Ronald E. McNair; Pilot Michael J. Smith; Payload specialist Christa McAuliffe; Mission Specialist Ellison Onizuka; and Payload specialist Gregory Jarvis. (NASA)

On January 28, 1986, the NASA shuttle orbiter mission STS-51-L and the tenth flight of Space Shuttle Challenger (OV-99) broke apart 73 seconds into its flight, killing all seven crew members, which consisted of five NASA astronauts, one payload specialist and a civilian school teacher. The spacecraft disintegrated over the Atlantic Ocean, off the coast of Cape Canaveral, Florida, at 11:39 a.m. EST. The disintegration of the vehicle began after a joint in its right solid rocket booster (SRB) failed at liftoff. The failure was caused by the failure of O-ring seals used in the joint that were not designed to handle the unusually cold conditions that existed at this launch. The seals' failure caused a breach in the SRB joint, allowing pressurized burning gas from within the solid rocket motor to reach the outside and impinge upon the adjacent SRB aft field joint attachment hardware and external fuel tank. This led to the separation of the right-hand SRB’s aft field joint attachment and the structural failure of the external tank. Aerodynamic forces broke up the orbiter.

The crew compartment and many other vehicle fragments were eventually recovered from the ocean floor after a lengthy search and recovery operation. The exact timing of the death of the crew is unknown; several crew members are known to have survived the initial breakup of the spacecraft. The shuttle had no escape system, and the impact of the crew compartment at terminal velocity with the ocean surface was too violent to be survivable.

“The whole country and the whole world were in shock when that happened, because that was the first time the United States had actually lost a space vehicle with crew on board,” said former NASA astronaut Leroy Chiao, who flew three space shuttle missions during his career (in 1994, 1996 and 2000), and also served as commander of the International Space Station from October 2004 through April 2005. 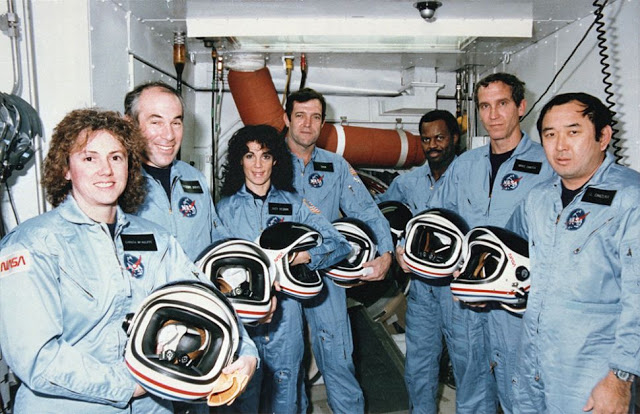 The disaster resulted in a 32-month hiatus in the shuttle program and the formation of the Rogers Commission, a special commission appointed by United States President Ronald Reagan to investigate the accident. The Rogers Commission found NASA's organizational culture and decision-making processes had been key contributing factors to the accident, with the agency violating its own safety rules. NASA managers had known since 1977 that contractor Morton-Thiokol’s design of the SRBs contained a potentially catastrophic flaw in the O-rings, but they had failed to address this problem properly. NASA managers also disregarded warnings from engineers about the dangers of launching posed by the low temperatures of that morning, and failed to adequately report these technical concerns to their superiors.

Approximately 17 percent of Americans witnessed the launch live because of the presence of high school teacher Christa McAuliffe, who would have been the first teacher in space. Media coverage of the accident was extensive: one study reported that 85 percent of Americans surveyed had heard the news within an hour of the accident. The Challenger disaster has been used as a case study in many discussions of engineering safety and workplace ethics. 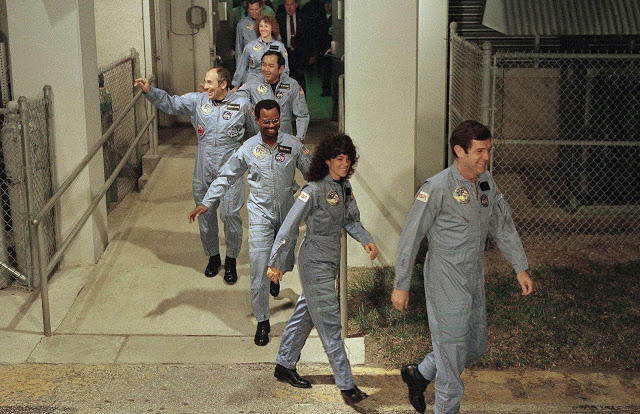 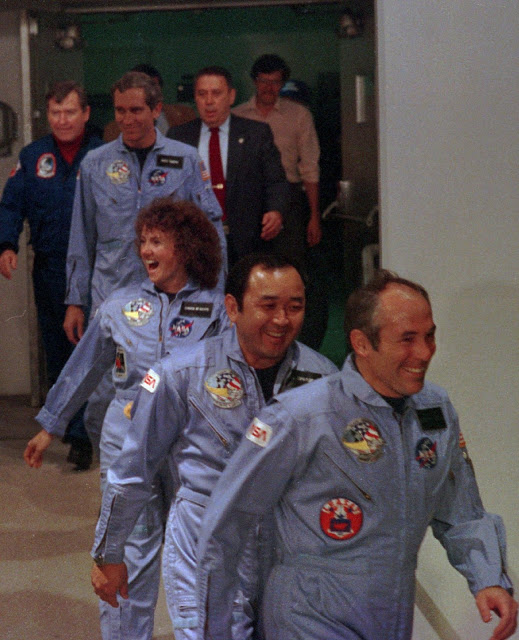 Four crew members of the space shuttle Challenger leave their quarters Jan. 27, 1986, en route to the launch pad at Kennedy Space Center. The launch was put off until the next day, when faulty O-rings in one of the booster rockets caused the Challenger to explode, killing the full crew of seven. From front are: Payload specialist Greg Jarvis, mission specialist Ellison Onizuka, school teacher Christa McAuliffe and pilot Mike Smith. (AP Photo) 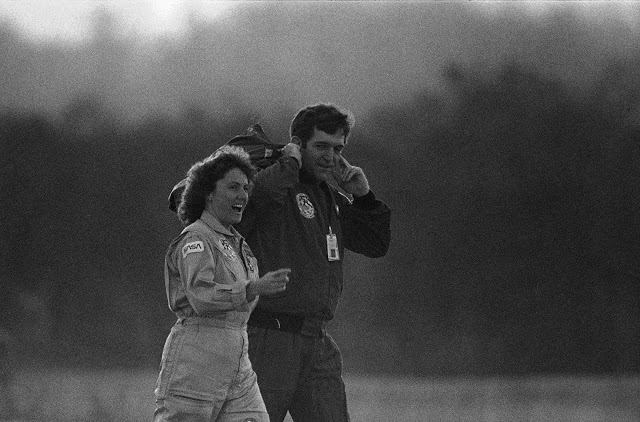 Christa McAuliffe and Commander Francis Scobee walk to a jet for a test flight at the Kennedy Space Center, Florida, Jan. 24, 1986. Scobee is holding his ears as protection against the noise of a jet engine. McAuliffe and Scobee are members of the crew for the Space Shuttle Challenger scheduled for launch on Sunday. (AP Photo/Phil Sandlin) 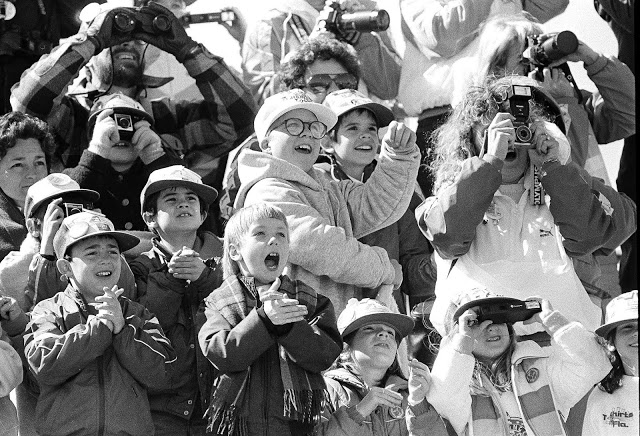 Classmates of the son of America’s first school teacher astronaut cheer as the space shuttle Challenger lifts skyward from Pad 39B, Jan. 28, 1986. Their delight soon turned into horror as the shuttle exploded about 70 seconds into flight. The boy in the white hat and glasses at center is not a schoolmate but is Peter Billingsley, spokesman for the young astronaut program. (AP Photo/Jim Cole) 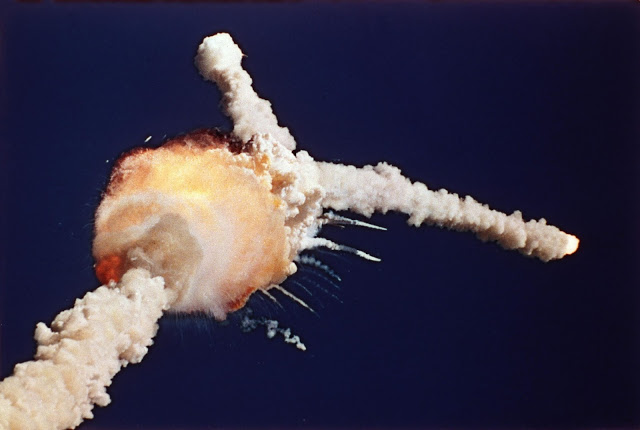 The Space Shuttle Challenger explodes shortly after lifting off from Kennedy Space Center, Fla., Tuesday, Jan. 28, 1986. All seven crew members died in the explosion, which was blamed on faulty o-rings in the shuttle’s booster rockets. The Challenger’s crew was honored with burials at Arlington National Cemetery. (AP Photo/Bruce Weaver) 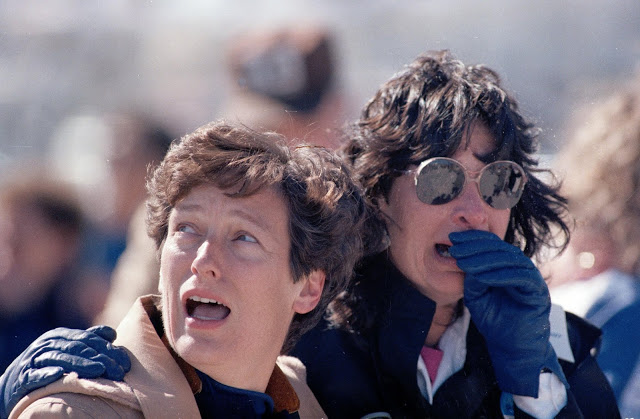 In this Jan. 28, 1986 picture, two unidentified spectators at the Kennedy Space Center in Cape Canaveral, Fla., react after they witnessed the explosion of the Space Shuttle Challenger. (AP Photo/File) 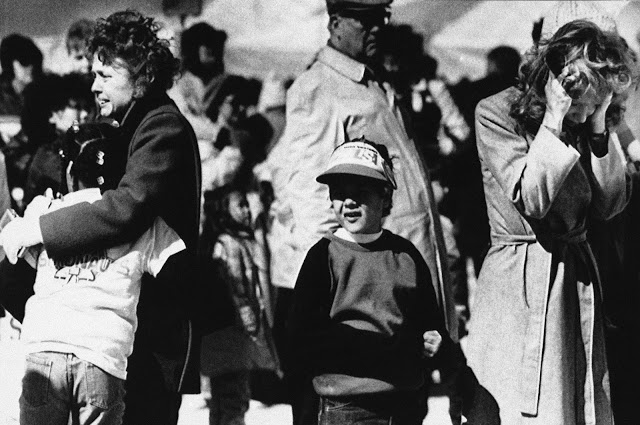 Young Scott McAuliffe’s third grade teacher comforts one of her charges as another youngster and a young woman, right, react after seeing the Space Shuttle Challenger explode in midair, killing all aboard, Tuesday, Jan. 28, 1986. The teacher and student are from the Kimbell Elementary School in Concord, N.H., where young McAuliffe, son of space school teacher Christa McAuliffe, is a student. (AP Photo) 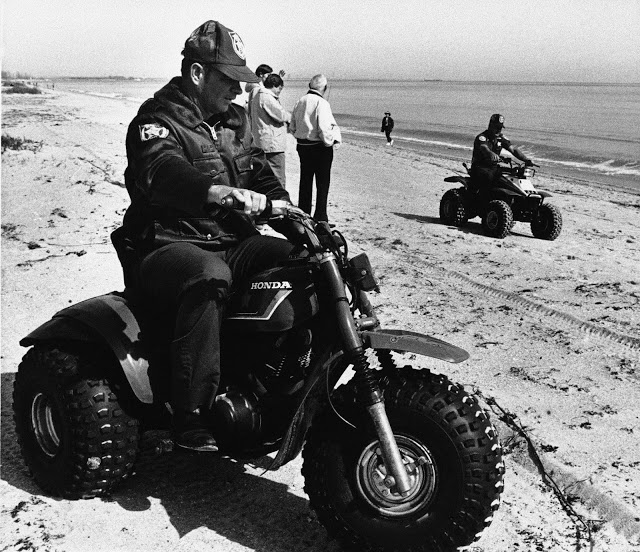 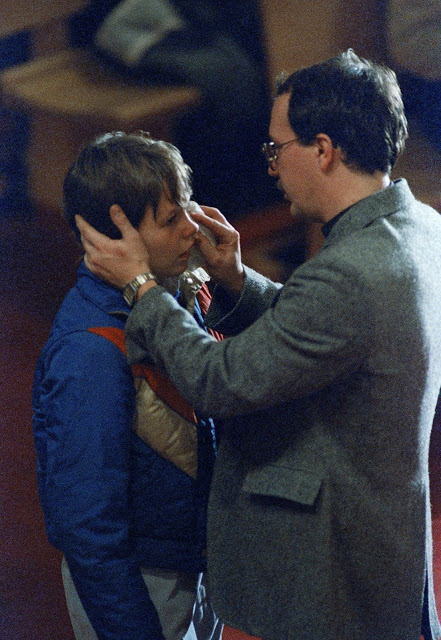 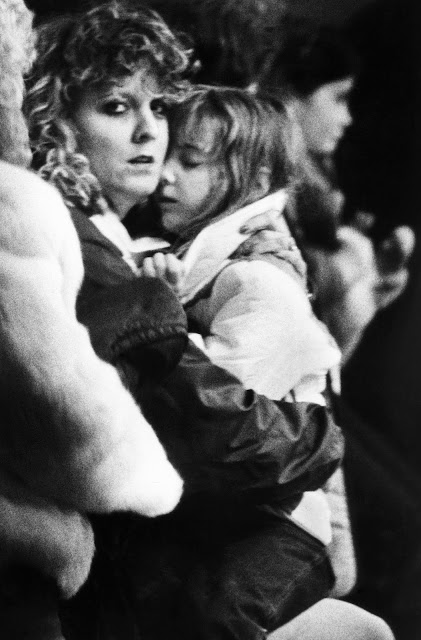 An unidentified woman hugs a child inside the Kimball School in Concord, N.H., Tuesday, Jan. 29, 1986, after the girl returned from the Kennedy Space Center, Fla., with a group of the classmates of the son of Christa McAuliffe. Christa was killed in the explosion of the Space Shuttle Challenger. The children had been up at five in the morning for the launch, and were rushed home after the event turned to disaster. (AP Photo/David Tenenbaum) 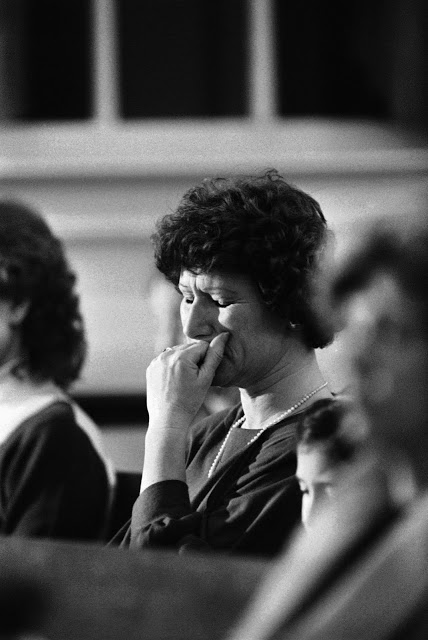 An unidentified woman weeps quietly during a memorial service at Brookside Church in Manchester, New Hampshire, on Thursday, Jan. 30, 1986 in honor of the crew of the Space Shuttle Challenger, who were killed in an explosion aboard the spacecraft on Tuesday. Concord, N.H., teacher Christa McAuliffe was among the seven on board. (AP Photo/Peter Southwick) 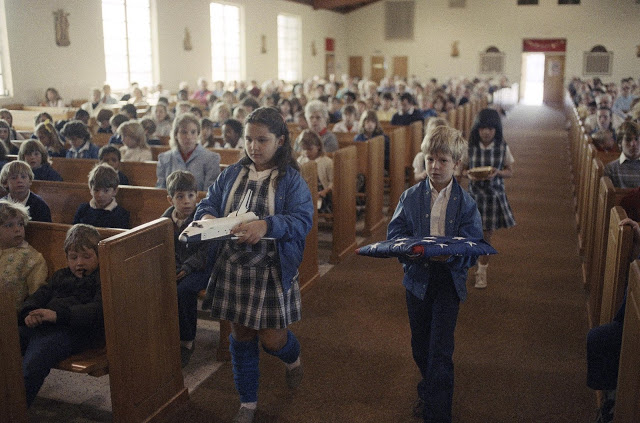 Diana Zeppiene, carrying a model of the Space Shuttle, and Eric Olson, carrying a folded American flag, walk down the aisle of Our Lady of Lourdes Catholic Church in Melbourne, Florida on Thursday, Jan. 30, 1986 during a children’s mass celebrated in honor of the Challenger crew. The children presented the model and flag as symbolic offerings. (AP Photo/Joe Skipper) 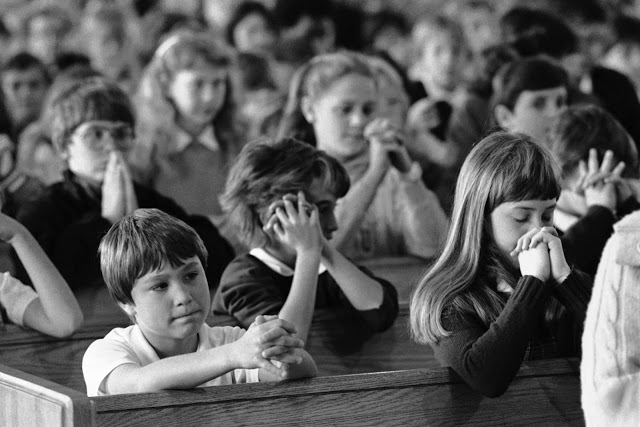 Students attend a children’s mass at Our Lady of Lourdes Catholic Church in Melbourne, Fla., on Thursday, Jan. 30, 1986, in honor of the seven crew members killed in the explosion of the Space Shuttle Challenger. (AP Photo/Joe Skipper) 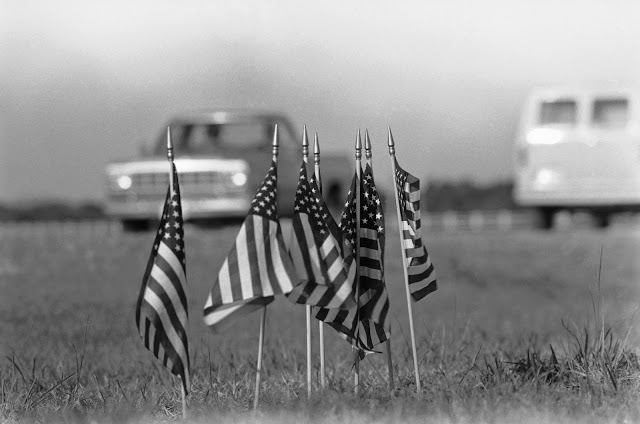 Kennedy Space Center workers enroute to Pad 39B were met by the sight of seven small American flags along side the road, Jan. 30, 1986. Seven crew members were killed in the explosion of the Space Shuttle Challenger on Tuesday which was launched from Pad 39B. (AP Photo/Phil Sandlin)

Posted by Yesterday Today at 3:25 PM