Viola Smith, a Pioneering Woman Drummer Who Was Still Actively Drumming at Age 100

Early in her music career, Viola Smith became known as “America’s fastest girl drummer.” She spent decades challenging the barriers facing female musicians -- and the centenarian she still plays today. She is the drummer for a band in her home community. 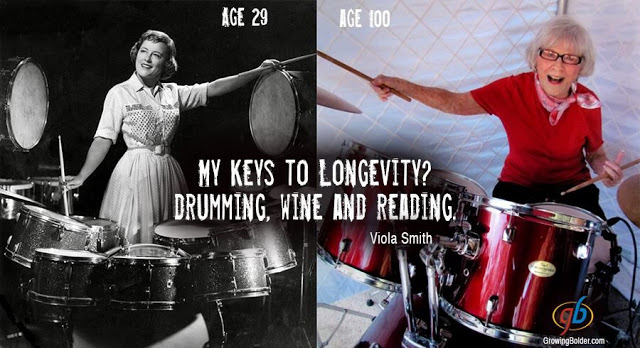 Smith was born on November 29, 1912 in Mount Calvary, Wisconsin, the eight of ten children. Smith’s love of music began at a young age. Her parents ran a dance hall in Mount Calvary, Wisconsin and she and her nine siblings all played instruments. By the age of 12, her father had arranged for her and her other underage sisters to have permission to travel and tour as part of his band, the Schmitz Sisters Family Orchestra. Later renamed the Smith Sisters, their band became a favorite touring group and even shared a bill with the Andrews Sisters. 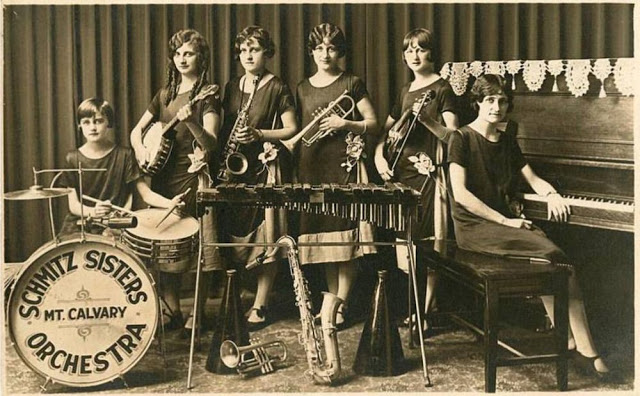 How did she come to start on drums? “I was the sixth girl,” she explained in an interview in 2012. “My dad dictated the choice of instruments in the family.”

In the late 1930s, Smith and her sister Mildred formed their own all-girl band, the Coquettes. Smith became known for the novelty of being a “girl drummer” and was featured on the cover of Billboard magazine in 1940. But Smith became dissatisfied with how women musicians were treated. “Before World War II there was great prejudice,” she said. “The men felt like: ‘Girl musicians, what are they doing on the road? It's a male job.’” 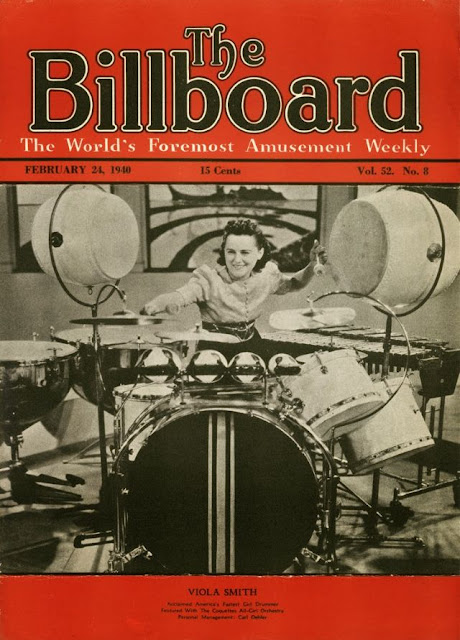 Viola Smith was featured on the cover of Billboard magazine in 1940. 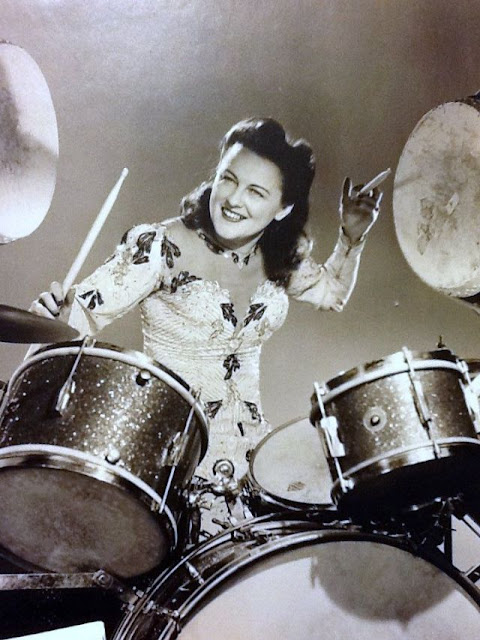 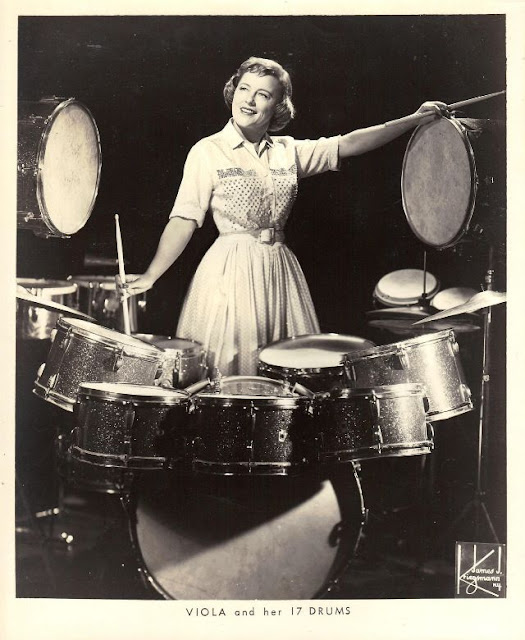 During the midst of WWII in 1942, she published an article in Down Beat magazine titled “Give Girl Musicians A Break!” Smith says, “I was asked to write the article on behalf of the many capable girl musicians who were out of work.” In it, she wrote, “In these times of national emergency, many of the star instrumentalists of the big name bands are being drafted. Instead of replacing them with what may be mediocre talent, why not let some of the great girl musicians of the country take their place?” The article generated furious discussion about the prejudice against female musicians. 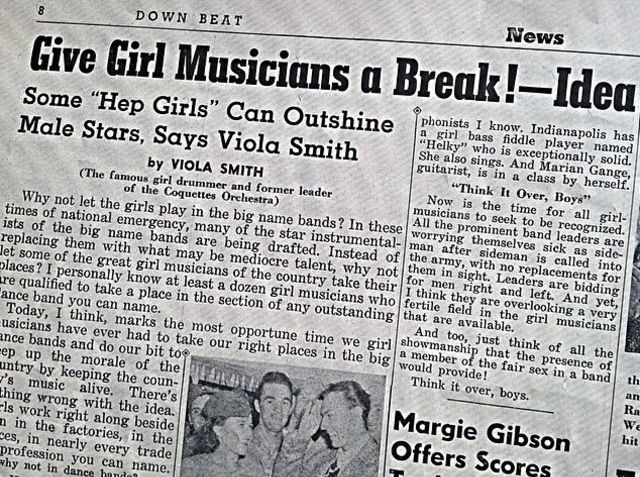 Since the 1940s, Smith has had a long and active career as a performer and teacher. Drumming every week from 1942 though 1954 on General Electric’s national syndicated radio program with Phil Spitalny’s all woman Hour of Charm Orchestra, Viola remained in demand long after the war ended. Movie appearances, drumming at President Truman’s inauguration celebration, The Ed Sullivan Show, playing on Broadway for the original run of Cabaret – she did it all!

Several years ago she retired from teaching drums, but to this day she still performs. Explaining her longevity, she said: “I definitely think that the exercise involved in drumming contributes to longevity. Spending two summers in Europe in 1942 and ‘44 started the wine habit: two glasses with dinner. Also hearing about a wine drinking community in Southern France where the longevity far exceeds that of the country as a whole. Thirdly, reading all of Adele Davis’ books over several decades ago, on a recipe for a long life.” 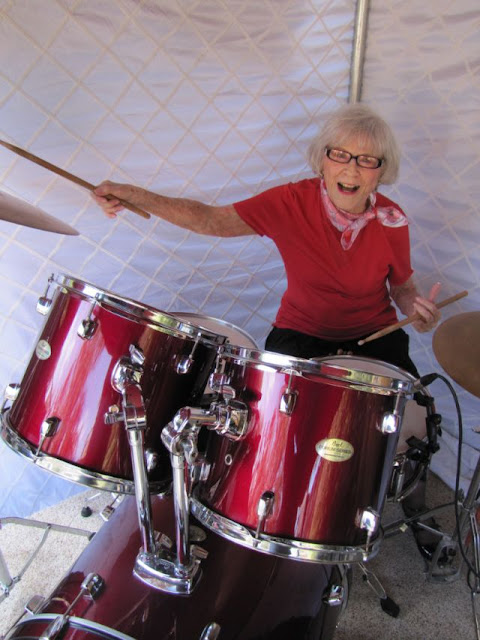 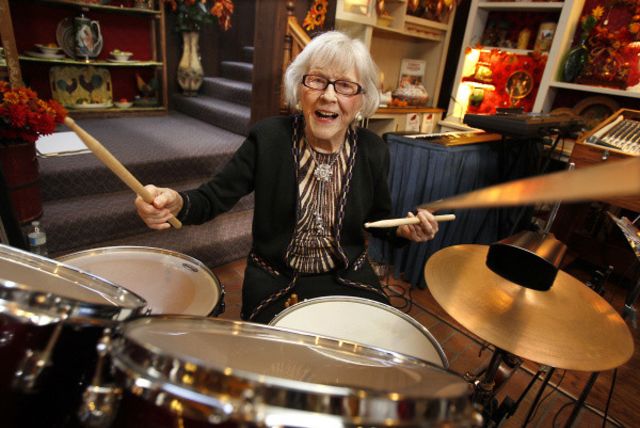 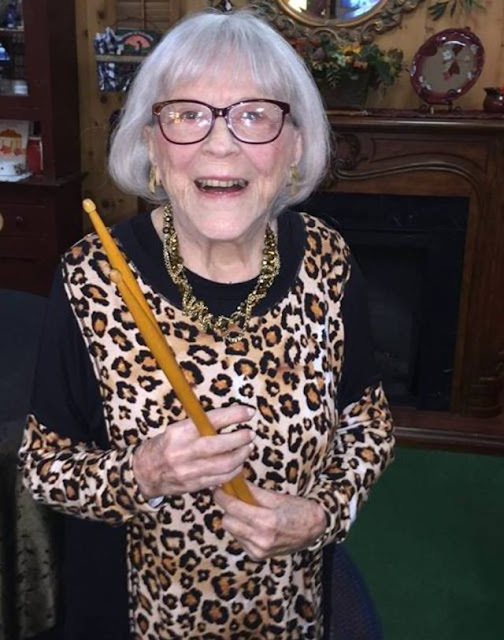 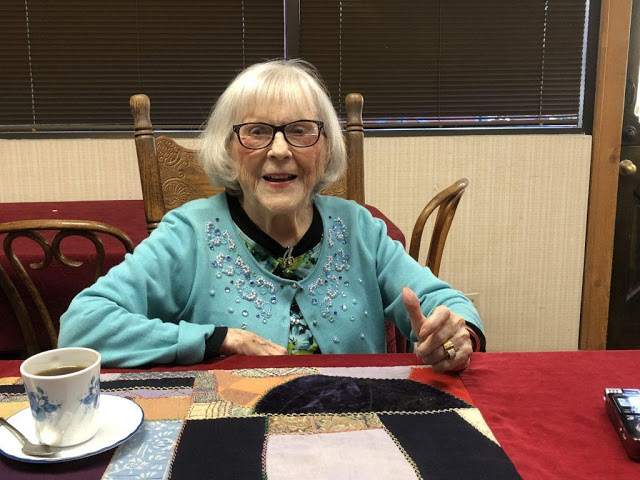 Posted by Yesterday Today at 12:32 PM