These colorized versions of vintage black-and-white crime scene photos reveal a unique
perspective on the murders, mobsters, and mayhem of decades past.

Though we may not often think it, crime scene photography plays an important role in
documenting history. These portraits are bloody, gruesome, even stomach-churning, but they
also open a seldom-seen window into what life was like at the time.

Throughout a large portion of the 20th century in New York City, for example, organized
crime ruled the streets of many of the city's neighborhoods. And while the grisly stories
of mob murders help reveal what those crime-ridden streets were like, the photos of those
crime scenes truly bring the past to life.

He seemed to have a sixth sense about when and where a crime was going to take place and
always seemed to be the first on the scene. Of course, it turned out that Weegee didn't
actually possess any superhuman abilities, just a police scanner. Nevertheless, his
photographs of New York City murders, suicides, fires, and so much more remain legendary
to this day.

Through it all, Weegee's twisted sense of humor also helped cement his iconic status. In
1936, he arrived at a crime scene to photograph a dead man whose body had been stuffed
into a trunk. For obvious reasons, the photo was too graphic to be printed in a newspaper,
so Weegee decided to employ a bit of dark humor for his shot: He snapped a shot of himself
looking into the trunk, which took the focus of the photo off of the mutilated body and
placed it on himself and made the audience feel as if they were behind the lens
themselves.

Whether Weegee was involved or not, plenty of history's most evocative crime scene photos
come with macabre little stories just like these. And some of these photos come with
macabre stories of a much larger scale.

Take, for example, the infamous photos of an entire row of bodies lined up along a wall
and riddled with bullets in a Chicago garage on Feb. 14, 1929. These photos are not only
gruesomely striking in their own right, they are also a glimpse at the aftermath of
perhaps the most notorious gangland slaying in American history. Known as the St.
Valentine's Day Massacre, the hit saw gunmen employed by Al Capone round up and slaughter
seven members of the rival North Side Gang.

Then there's the photo of Joseph Rosen, gunned down in his candy store on September 13,
1936, in Brooklyn. The photo itself is bloody — as is the bloody story associated with it.
After police were able to link the brutal slaying to gangster Louis "Lepke" Buchalter,
Rosen's murder set off a chain of events that would cause the downfall of the most
fearsome and lethal ring of hitmen in New York's history: Lepke's Murder Inc.

But whether such stories lurk behind these photos, vintage crime scene images remain a
powerful window into the past. And especially when they're brought to life in stunning
color, they can transport us back to another time and show us what the city streets were
once like in all their grisly glory. 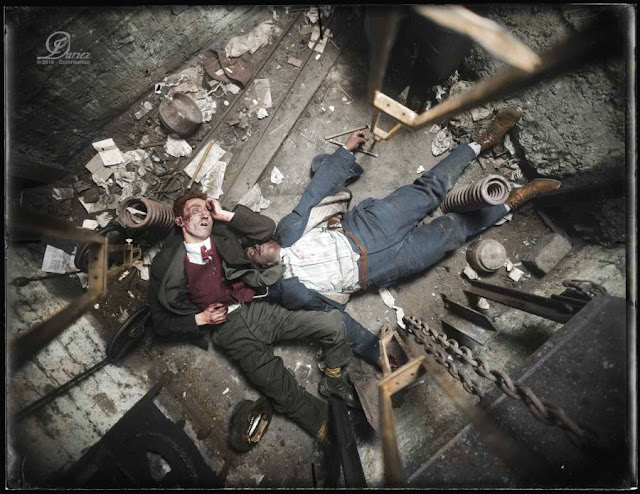 The bodies of two would-be thieves named Robert Green and Jacob Jagendorf after a
failed robbery attempt that ended when they accidentally fell down the building's elevator
shaft. New York. 1915. 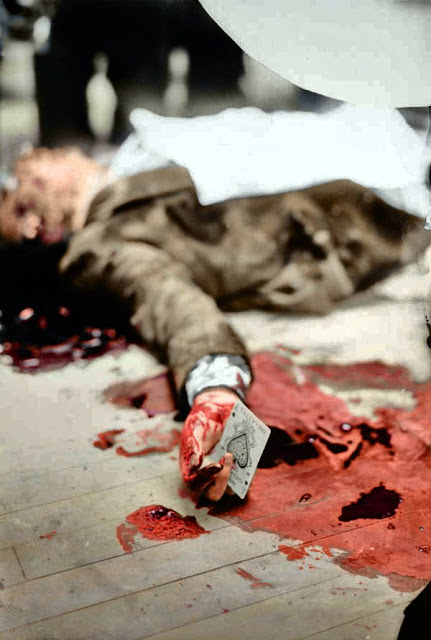 Mafia kingpin Joe Masseria holds the ace of spades, "the death card," in his hand
following his murder on the orders of infamous gangster Charles "Lucky" Luciano in a Coney
Island restaurant. 1931. 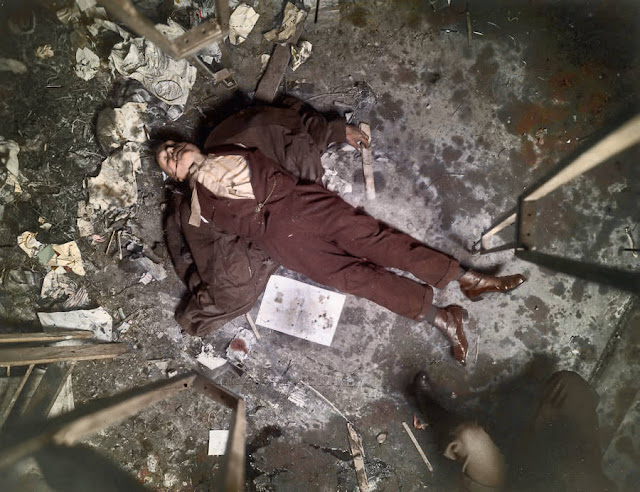 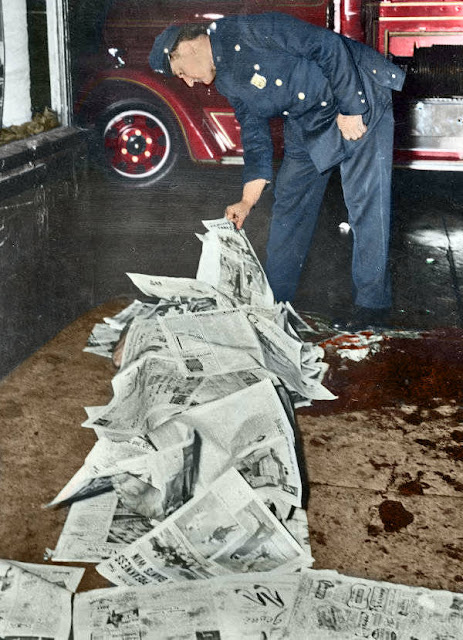 A New York police officer takes a peek at a dead body covered with newspapers. 1943. 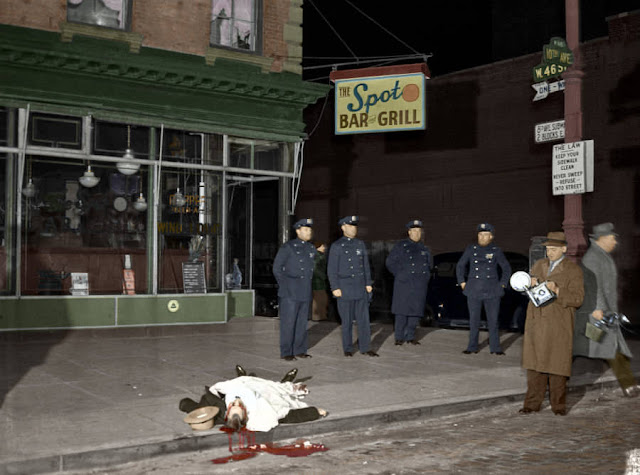 Murdered gangster David Beadle, also known as "David the Beetle," in front of The Spot
Bar and Grill in Manhattan. 1939. 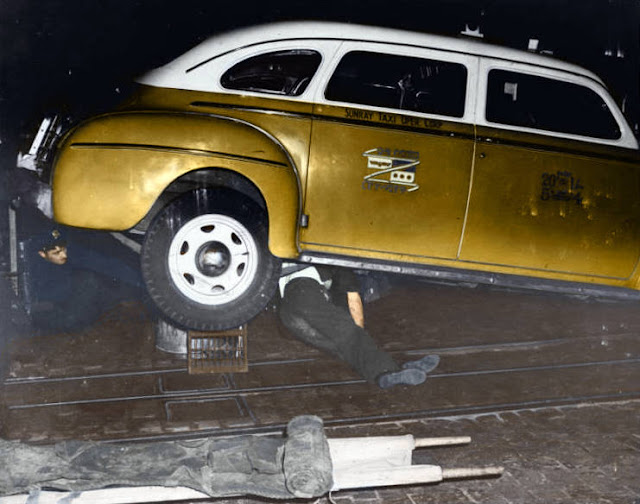 A police officer crouches under the rear end of a taxi jacked up on a crate and
garbage can as the dead body of a man who was hit by the cab lies underneath. 1943. 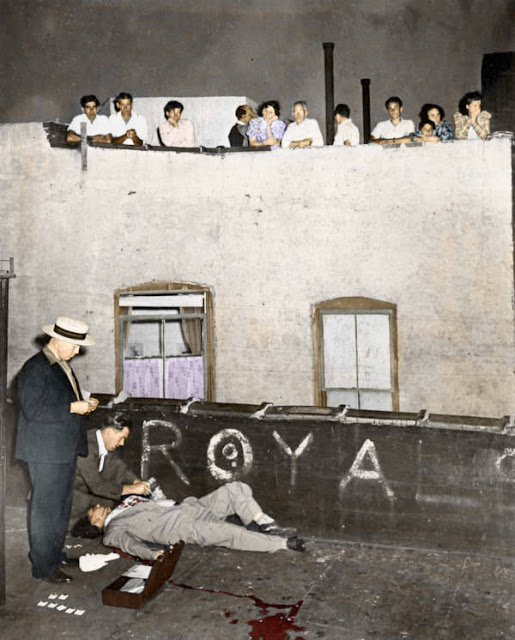 Forensic detectives take the fingerprints of murdered store owner Joseph Gallichio, as
he lies on the roof beside his cage of racing pigeons. New York. 1941. 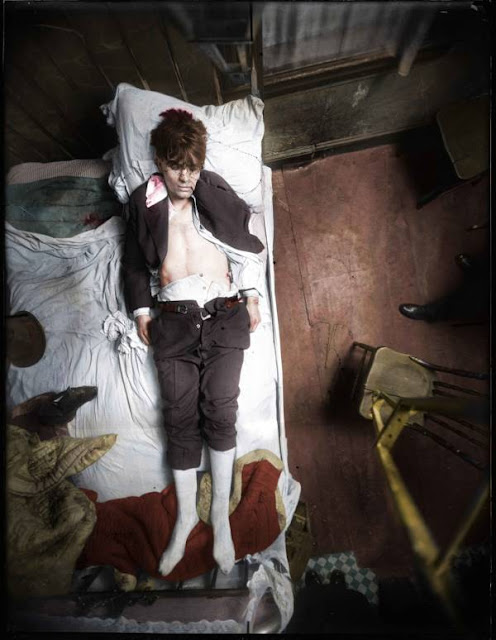 The body of a man named Antonio Pemear, who was found murdered in his bed in Brooklyn.
1915. 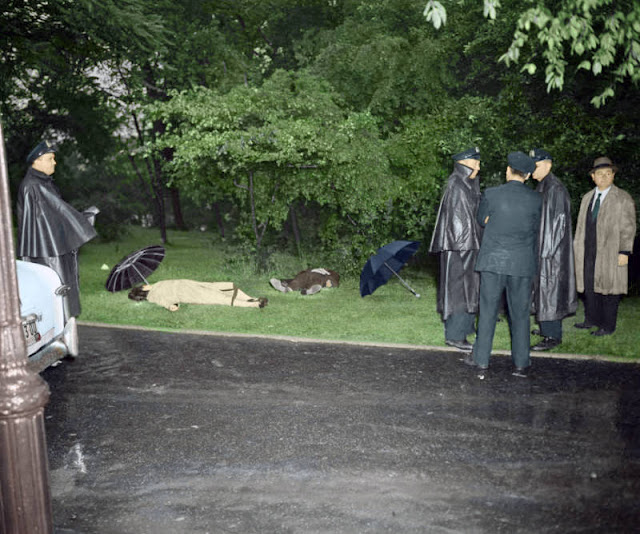 Scene of a murder-suicide in New York's Central Park. 1952. 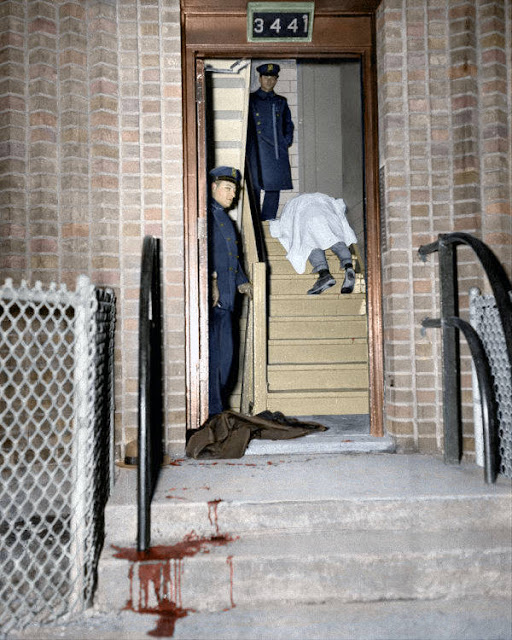 Two police officers with a dead body in a New York apartment stairwell. 1957. 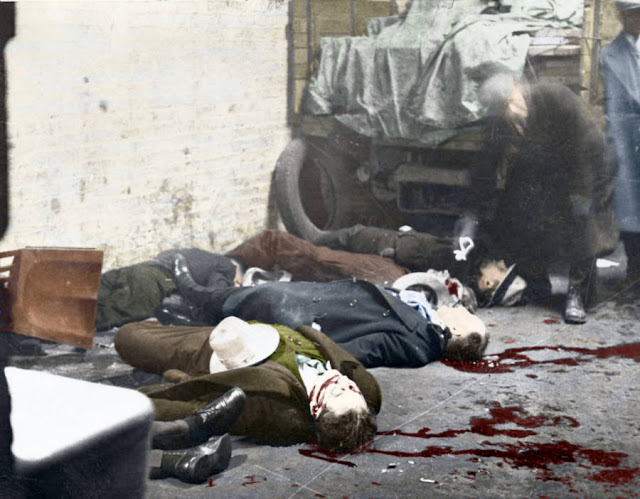 The Saint Valentine's Day Massacre, in which seven members of the North Side Gang
were trapped in a garage, lined up against the wall, and shot to death by members of Al
Capone's rival gang during a power struggle for control of Chicago. 1929. 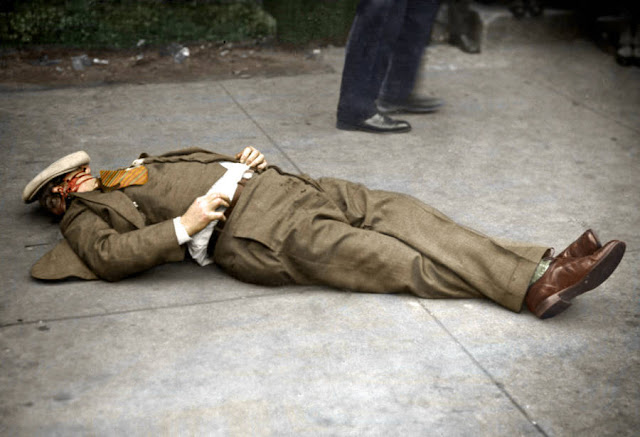 The body of Earl "Hymie" Weiss, leader of Chicago's North Side Gang. He was killed
when Al Capone's men opened fire with a submachine gun on him and his associates while
they were visiting a courthouse where an ally of his was on trial. 1926. 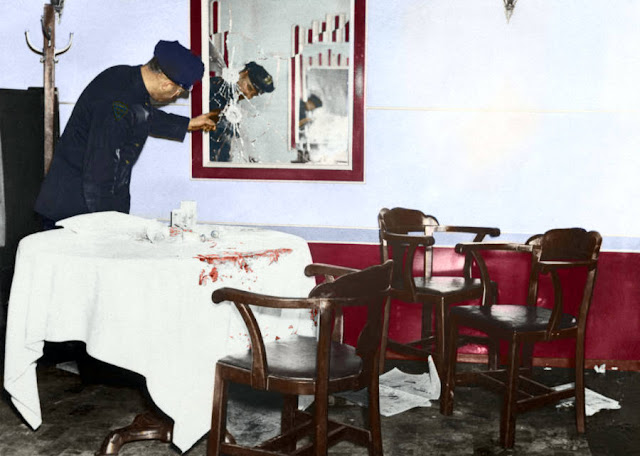 The murder scene of Arthur "Dutch Schultz" Flegenheimer, a powerful New York gangster
in the 1920s and '30s who was ultimately killed in Newark, New jersey by an assassin hired
by the Mafia Commission. The Commission had denied Schultz's request to murder the
prosecutor that was targeting him. When he disobeyed and attempted the murder anyway, the
Commission had him killed. 1935. 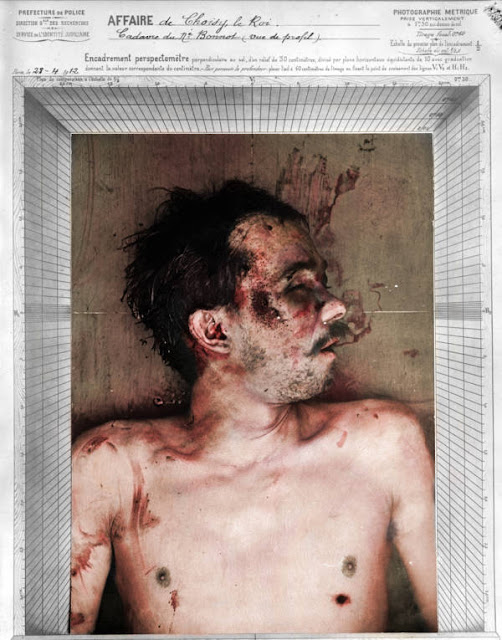 Close-up of a corpse's battered and bloodied face. Angres, France. 1912. 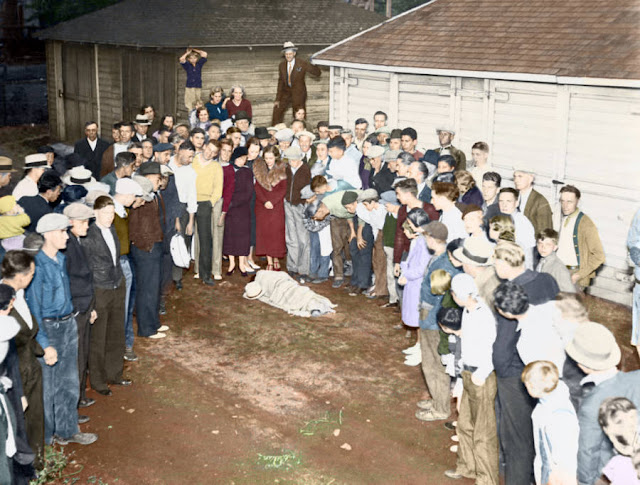 The dead body of Homer Van Meter, an associate of John Dillinger and a notorious bank
robber, who was killed after fleeing police in St. Paul, Minn. 1934. 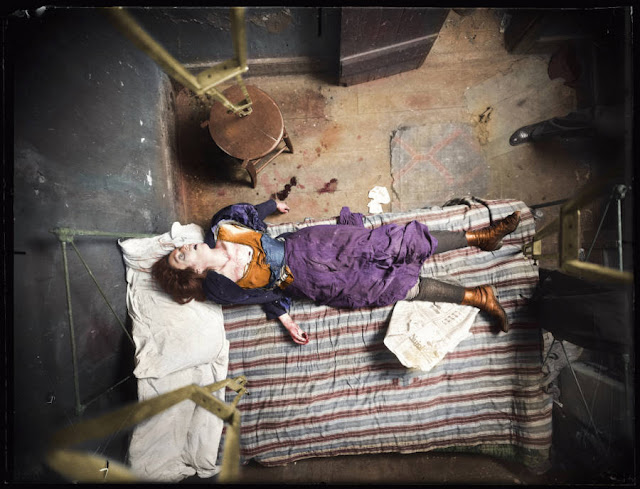 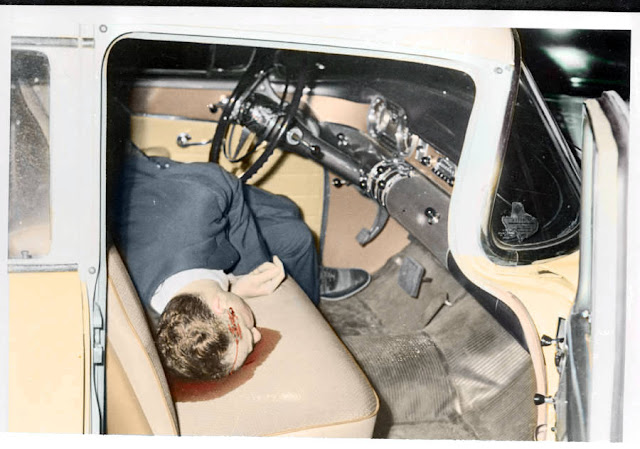 The dead body of Al Capone associate Charles "Cherry Nose" Gioe, who was shot through
the head by mafia hitmen hired by a Chicago mob boss whose plans Gioe had unknowingly
interfered with. 1954. 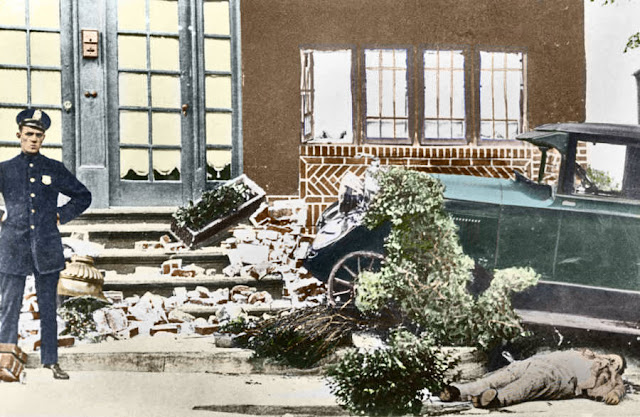 The body of Brooklyn mobster Frankie Yale. He was killed by unidentified rival
gangsters following a car chase through the streets of New York. 1928. 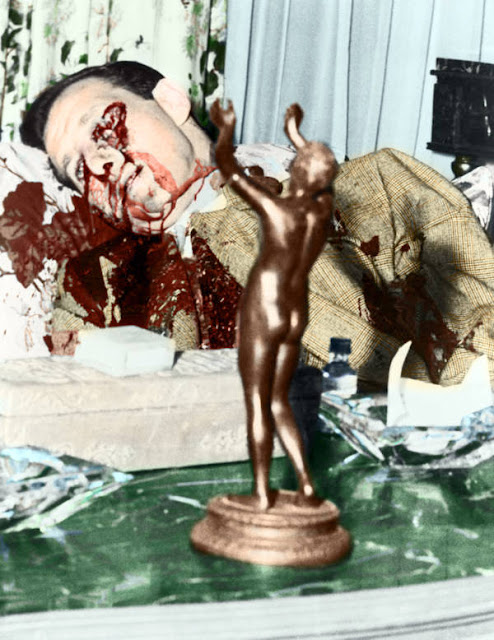 The body of mobster Benjamin "Bugsy" Siegel, who was killed by an unknown assailant
who shot him through a window with an M1 Carbine while he was staying at an associate's
house in Beverly Hills. 1947. 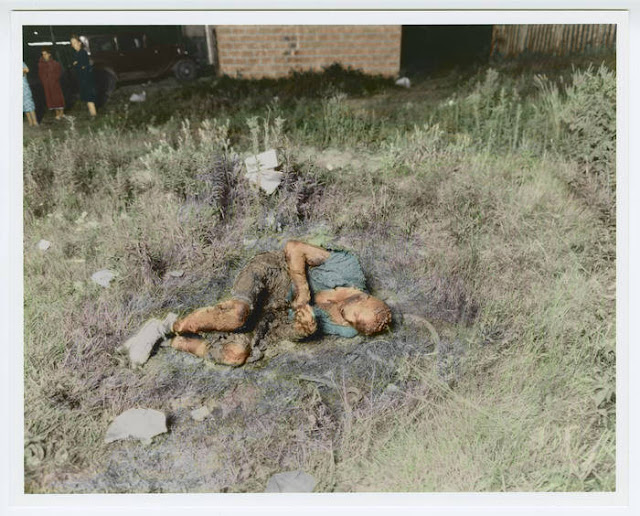 The burnt body of gangster Irving Feinstein, who was set on fire by Murder Inc.
killers Harry Strauss and Martin Goldstein and left exposed in a lot in New York City.
1938. 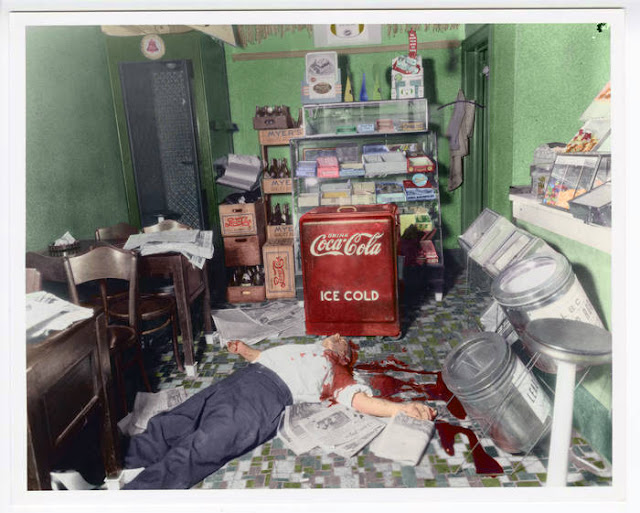 The dead body of Joseph Rosen, a candy shop owner who was killed by Murder Inc.
leader Louis "Lepke" Buchalter in his own store in Brooklyn. 1936. 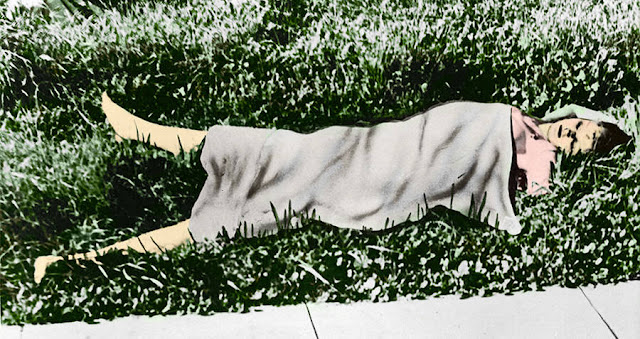 The naked corpse of American aspiring actress and murder victim Elizabeth Short,
known as the "Black Dahlia," lying in a vacant lot in Los Angeles. 1947. 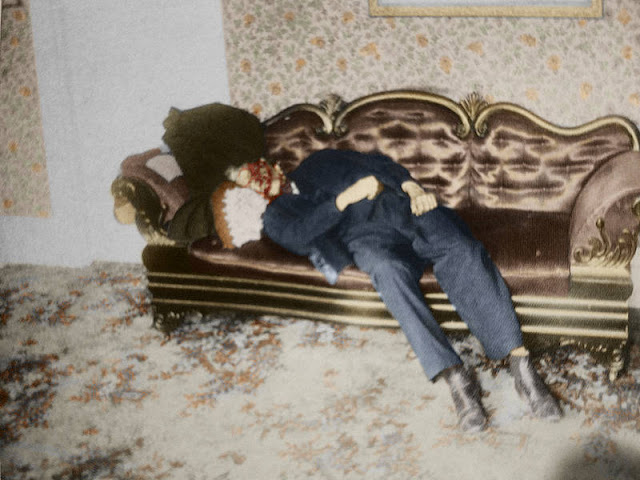 The dead body of Andrew Borden, father of Lizzie Borden, in his house in Fall River,
Mass. 1892. 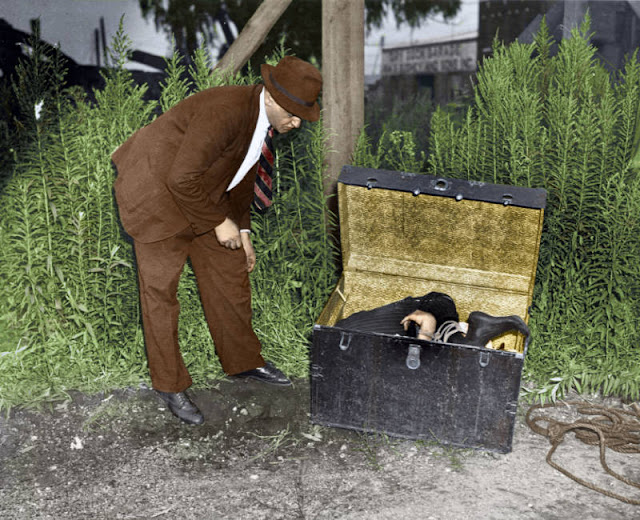 Newspaper photographer Arthur Fellig, better known as Weegee, examines a body stuffed
into a trunk and deposited on a patch of waste ground in New York. Circa 1945. 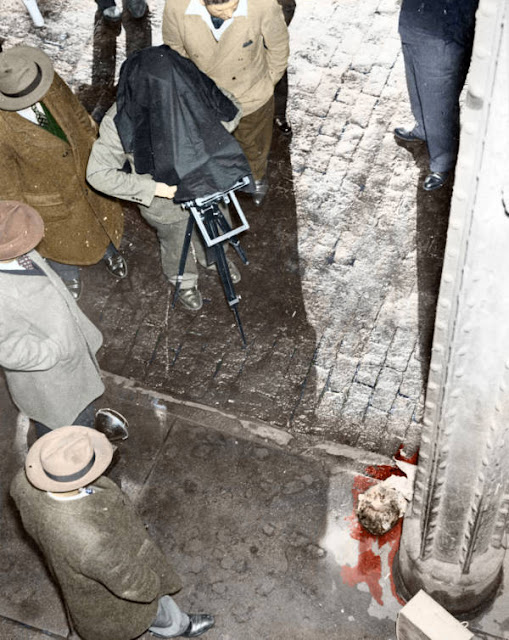 Weegee photographs a human head at the scene of a murder. Circa 1945. 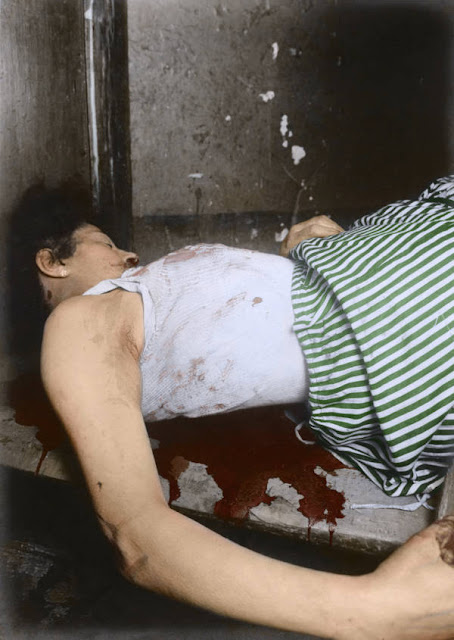 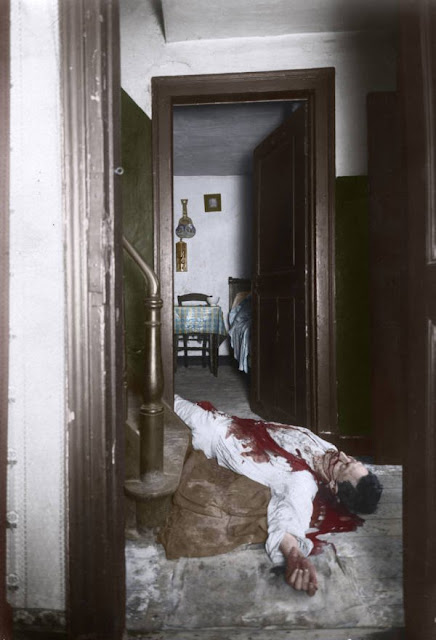 A dead man at the foot of a staircase in a French crime scene. 1912. 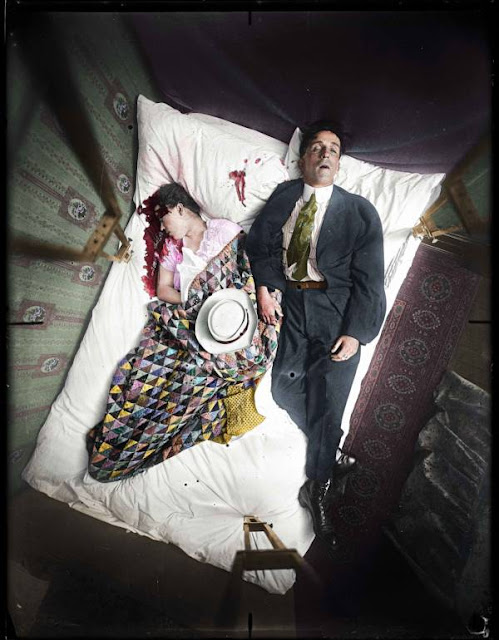 A photo of a bloodied couple lying dead in bed in New York. 1915. 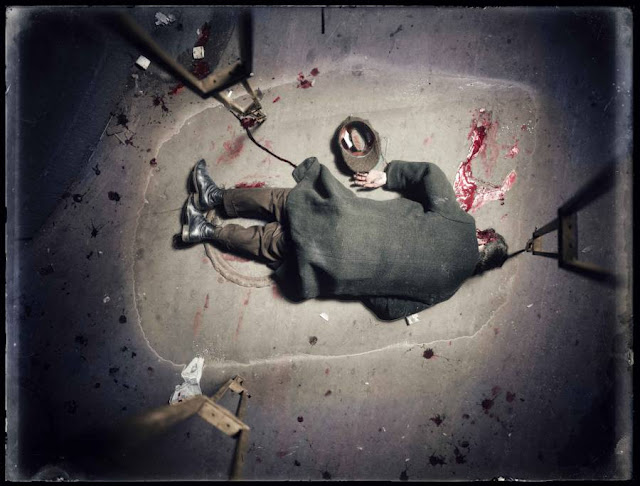 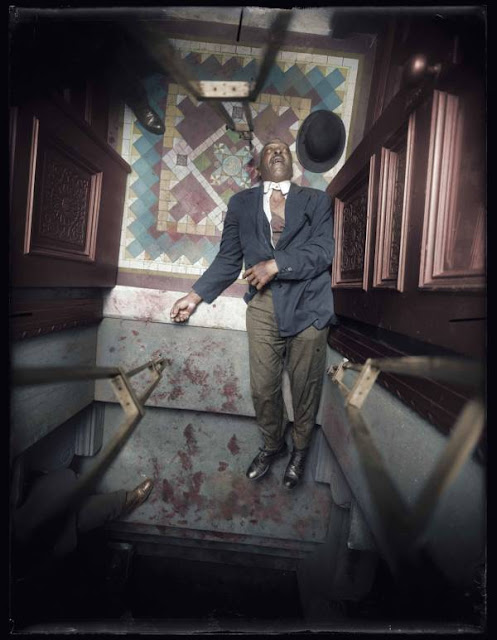