Soviet Soldiers Openly Sexually Harass a German Woman in Leipzig After the Victory of WWII, 1945

Soviet soldiers openly sexually harass a passing German woman near the West Hall section
of the Leipzig Hauptbahnhof central railway terminus. As Allied troops entered and
occupied German territory during the later stages of the war, mass rapes took place both
in connection with combat operations and during the subsequent occupation. 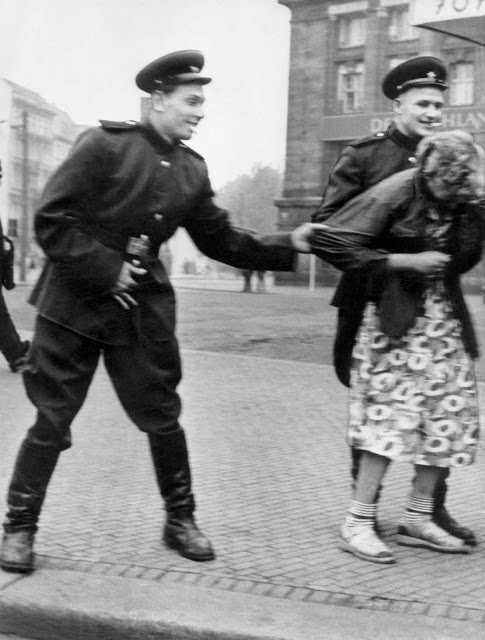 Most Western scholars agree that the majority of the rapes were committed by Soviet
servicemen, while some Russian historians maintain that these crimes were not widespread.
The wartime rapes had been surrounded by decades of silence.

The majority of the assaults were committed in the Soviet occupation zone; estimates of
the numbers of German women raped by Soviet soldiers have ranged up to 2 million.
According to historian William Hitchcock, in many cases women were the victims of repeated
rapes, some as many as 60 to 70 times. At least 100,000 women are believed to have been
raped in Berlin, based on surging abortion rates in the following months and contemporary
hospital reports, with an estimated 10,000 women dying in the aftermath. Female deaths in
connection with the rapes in Germany, overall, are estimated at 240,000.

Antony Beevor, whose books were banned in 2015 from some Russian schools and colleges,
describes it as the "greatest phenomenon of mass rape in history", and has concluded that
at least 1.4 million women were raped in East Prussia, Pomerania and Silesia alone.

According to Natalya Gesse, Soviet soldiers raped German females from eight to eighty
years old. Soviet women were not spared either. When General Tsygankov, head of the
political department of the First Ukrainian Front, reported to Moscow the mass rape of
Soviet women deported to East Germany for forced labour, he recommended that the Soviet
women be prevented from describing their ordeal on their return to Russia.

When Yugoslav politician Milovan Djilas complained about rapes in Yugoslavia, Stalin
reportedly stated that he should "understand it if a soldier who has crossed thousands of
kilometres through blood and fire and death has fun with a woman or takes some trifle." On
another occasion, when told that Red Army soldiers sexually maltreated German refugees, he
reportedly said: "We lecture our soldiers too much; let them have their initiative."

Historian Norman Naimark writes that after the summer of 1945, Soviet soldiers caught
raping civilians were usually punished to some degree, ranging from arrest to execution
However, the rapes continued until the winter of 1947–48, when Soviet occupation
authorities finally confined Soviet troops to strictly guarded posts and camps, separating
them from the residential population in the Soviet zone of Germany.


Posted by Yesterday Today at 6:44 PM